All articles from this author
Takahide Fukuyama


All articles from this author
Shinji Taguchi


All articles from this author
Ilhyong Ryu

The C–H chlorination by molecular chlorine is a highly exothermic reaction that proceeds via a radical chain mechanism as illustrated in Scheme 1 [1-6]. Frequently, photoirradiation is used for radical initiation through homolysis of the Cl–Cl bond to generate chlorine radicals. In a subsequent step, a SH2 reaction by chlorine radicals at C–H bonds generates alkyl radicals and HCl. The second SH2 reaction between alkyl radicals and molecular chlorine then occurs to give the C–H chlorinated product and a chlorine radical, sustaining the radical chain. Chlorine gas is a cheap feedstock since it is formed as a byproduct of the electrolysis of NaCl to produce NaOH in an industrial process [7]. We felt that C–H chlorination would be updated by using scalable flash chemistry [8].

Flow C–H chlorination using a compact flow reactor is highly desirable in terms of efficiency and safety in handling highly toxic gases such as chlorine. In 2002, Jähnisch and co-workers reported the first microflow chlorination of 2,4-diisocyano-1-methylbenzene, which used a falling-film reactor developed by IMM [9]. While the flow rate employed was quite low (0.12 mL/min of toluene), the residence time was less than 14 seconds. More recent studies on flow C–H chlorination reactions focused on the use of Cl2 gas in situ generated by photolysis of sulfuryl chloride [10] or by acid treatment of NaOCl [11,12]. We thought that if rationally designed scalable photoflow setups were available, flow C–H chlorination reactions using chlorine gas would be able to focus on production. In this study, we tested a novel photoflow setup consisting of quartz-made straight-line reactors, which are provided from MiChS (LX-1, Figure 1a) and a high-power LED (MiChS LED-s, 365 ± 5 nm, Figure 1b) [13]. Each channel track has a 2 mm depth and 557 mm length, while the width varies from 6 or 13 mm depending on the number of channels 7 or 5, respectively. The flow photoreactor is embedded into an aluminum frame equipped with a heat carrier channel. The design concepts including angle settings to ensure a thin liquid layer are summarized in Figure 1.

Using a PTFE tube and PTFE connectors, we connected the photoflow setup with a chlorine gas cylinder through a floating gas level meter in a fume hood (Figure 2). Since ethylene carbonate (1) melts between 34–37 °C, we preheated the container of 1 using an oil bath at 70 °C and pumped it to the photoreactor. In the reactor, hot water (80 °C) was circulated through a hole channel manufactured in an aluminum-made frame to keep the contacted glass reactor warm. The LED lamp was placed on the upper side of the reactor with a 20° angle to the reactor surface. The exiting gases (HCl and unreacted Cl2) were trapped by an aqueous NaOH solution (1.7 M).

The reactors are set with a slope of 15 or 5° to achieve a thin substrate layer causing a rapid gas/liquid biphasic reaction. The residence time was estimated to be 15 and 30 seconds, respectively (for the measurement, ethylene carbonate was introduced in the absence of chlorine gas). After the experiments, chlorine gas that remained inside the flow setup was flushed with N2 gas. In general, we used ethylene carbonate (1) with the grade containing less than 0.03% of water. The results are summarized in Table 1.

We then investigated the effect of contamination with water on the reaction, since Cl2 gas is known to react with H2O under irradiation conditions [31] and the results are summarized in Table 2. The flow rate of 1 and the equivalents of chlorine to 1 were set to be 187 mmol/min and 0.60–0.69, respectively. The reactor angle and light power were 15° and 240 W, respectively. The chlorination reaction using an ordinary grade of the substrate 1 containing 0.03% of water gave a 96:4 ratio of products 2 and 2’ with 26% conversion of 1 (Table 2, entry 1). In contrast, when we used substrate 1 containing 0.15% of water, the conversion decreased to 11% (Table 2, entry 2). With 0.76% of water, the conversion decreased further to 9% (Table 2, entry 3). These results suggest that the reaction has to be carried out carefully under dry conditions.

aReactions were conducted by using LX-1 with a rector angle of 15° and LEDs (240 W). bMeasured by GC.

In this work, we reported that a novel photoflow setup designed for a gas–liquid biphasic reaction turned out to be useful for the C–H chlorination using chlorine gas in flow. Two decades after the first report on the microflow chlorination of a toluene derivative by Jähnisch and co-workers, we propose a new photoflow setup for C–H chlorination using chlorine gas, applicable to scalable flow C–H chlorination. In our test reaction using C–H chlorination of ethylene carbonate (1), chloroethylene carbonate (2) was obtained in good to excellent selectivity by tuning the flow rates of 1 and chlorine gas. Partial irradiation of the flow channel is sufficient for the C–H chlorination, consistent with the requirement for light irradiation for the radical initiation step. If we apply the conditions to give 80% selectivity with 60% conversion with 30 s residence time, around 15 kilograms of chloroethylene carbonate (2) can be synthesized per day, which suggests the high potential of the present photoflow setup. We also demonstrated that the contamination with water had a negative impact on the reaction and the system should be kept dry for continuous production. We are now investigating some other photo gas–liquid flow reactions, which will be reported in due course.

The photoflow setup consisting of a flow photoreactor LX-1 and UV-LEDs were supplied from MiChS Inc., Ltd. (http://www.michs.jp). The angle of the photoflow reactor was set to be 15 or 5° and heated water at 80 °C was circulated in a channel of an aluminum-made frame to avoid solidification of ethylene carbonate (1), whose melting point is 34–37 ºC. The UV-LED (365 ± 5 nm) was set with an angle of 20° to the reactor surface. Ethylene carbonate (1) preheated to 70 °C was fed into each channel of the flow photoreactor by using a diaphragm pump. At the same time, chlorine gas was fed into the reactor from the top-side inlet. Evolved HCl gas and unreacted Cl2 gas were trapped by an aqueous 1.7 M NaOH solution. The first eluted solution was discarded for 3 min after which the eluted solution was collected for analysis. GC analysis was performed on a Shimadzu GC-2014 equipped with an FID detector using an Agilent J&W DB-1 column (Ø 0.25 mm × 30 m) under the following conditions: initial oven temperature: 40 °C, temperature change rate of 5 °C/min to 250 °C, hold at this temperature for 10 min. Yields were determined by using the percentage peak area method with compensation for the relative sensitivities of each component. Product 2 and byproduct 2’ were confirmed by 1H and 13C NMR analysis (see Supporting Information File 1).

We thank Prof. Masaaki Sato and Dr. Hitoshi Mitsui at MiChS Inc. for useful discussions. IR thanks the Center for Emergent Functional Matter Science at NYCU for support.

© 2022 Kasakado et al.; licensee Beilstein-Institut.
This is an open access article licensed under the terms of the Beilstein-Institut Open Access License Agreement (https://www.beilstein-journals.org/bjoc/terms), which is identical to the Creative Commons Attribution 4.0 International License (https://creativecommons.org/licenses/by/4.0). The reuse of material under this license requires that the author(s), source and license are credited. Third-party material in this article could be subject to other licenses (typically indicated in the credit line), and in this case, users are required to obtain permission from the license holder to reuse the material. 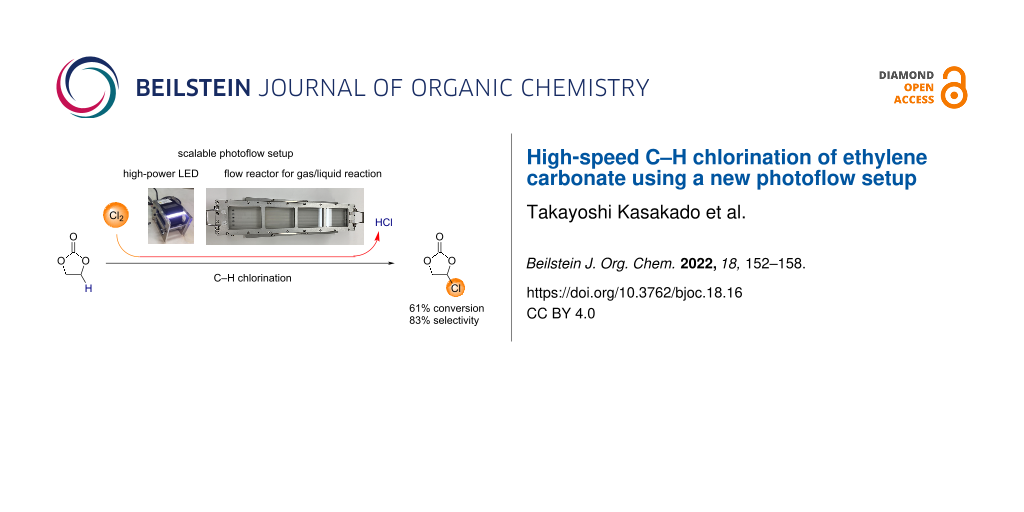