All articles from this author
Bingbing Li


All articles from this author
Zefang Zhou


All articles from this author
Maosheng Cheng


All articles from this author
Lu Yang

The formal total synthesis of macarpine was accomplished by the construction of a naphthol intermediate in Ishikawa’s synthetic route with two different synthetic routes. The convergent synthetic strategies feature the utilization of Au(I)-catalyzed cycloisomerizations of a 1,5-enyne and alkynyl ketone substrates, which were prepared by Sonogashira coupling reactions.

Among these alkaloids macarpine is the most oxidized tetracyclic alkaloid with many bioactivities, including anesthesia, anticancer, anti-inflammatory [4-8], insecticidal, fungicidal, etc [9]. In addition to the above-mentioned activities, macarpine was also used as a DNA probe for flow cytometry and fluorescence microscopy due to its fluorescent properties [10]. Despite some research on the activities of macarpine had been performed, a more in-depth evaluation of the biological activities was still limited due to the need of its isolation from natural sources. Inspired by the requirement of further biological evaluation, the chemical syntheses of macarpine have been developed rapidly in the last three decades.

The benzo[c]phenanthridine skeleton consists of a phenanthridine (rings A, B, C) and a benzene (ring D), and most of the synthetic routes were completed in the last step by constructing ring B or ring C. Some representative examples and their key strategies are summarized in Scheme 2. In 1989, Hanaoka and co-workers developed the total synthesis of macarpine by Hofmann elimination from protoberberine by introducing rings B and C (Scheme 2a) [11]. In 1995, Ishikawa and co-workers accomplished the total synthesis via a Reformatsky reaction and aromatic nitrosation through the building of rings B and C (Scheme 2b) [12]. In 2010, Echavarren and co-worker completed the formal total synthesis via a Au(I)-catalyzed cyclization (Scheme 2c) [13]. In 2018, Pabbaraja and co-workers disclosed the synthesis of macarpine by constructing ring C through the domino Michael addition/SNAr reaction of nitromethane to an ynone precursor (Scheme 2d) [14].

The efforts on developing efficient synthetic strategies to access macarpine never ceased during the last decades, and we have joined this meaningful research. Herein, a strategy involving the synthesis of an intermediate reported by Ishikawa in 1995 in the total synthesis of macarpine [12] is proposed via a Au(I)-catalyzed cycloisomerization reaction.

Retrosynthetically, the target molecule macarpine (1) could be disconnected into naphthol 12 (Scheme 3), a key intermediate reported by Ishikawa in the total synthesis of macarpine. This intermediate could be synthesized from silyl enol ether compound 10 via the Au(I)-catalyzed cycloisomerization reaction developed by our group [15]. The compound 10 could be constructed by the Sonogashira coupling reaction from readily prepared iodoarene 8 [12,16] and ketone 5, which could be synthesized by using cheap 6-bromopiperonal (2) as the starting material.

To attempt the proposed synthetic strategy, ketone 5 and iodoarene 8 were prepared by following the synthetic route outlined in Scheme 4. Ketone 5 was prepared in a four-step procedure. Firstly, a Sonogashira coupling between 6-bromopiperonal (2) and trimethylsilylacetylene was performed to furnish aldehyde 3 [17,18] in 89% yield. A following nucleophilic addition reaction of aldehyde 3 by methylmagnesium bromide (MeMgBr) gave alcohol 4 in 99% yield, which was oxidized by pyridinium chlorochromate (PCC) leading to the formation of ketone compound and the deprotection of the silyl group was accomplished in the presence of potassium carbonate (K2CO3) and methanol to provide the terminal alkyne 5 in 96% yield in two steps. The iodoarene 8 [12,16] was facilely synthesized from sesamol (6) via methylation and iodination in an overall yield of 67%.

With the building blocks 5 and 8 in hand, ketone 9 was prepared via a palladium-catalyzed Sonogashira coupling reaction in a yield of 95%. The precursor 10 for the gold(I)-catalyzed [19-24] cycloisomerization was then synthesized by treating ketone 9 with sodium bis(trimethylsilyl)amide (NaHMDS) and tert-butyldimethylsilyl chloride (TBSCl) (Scheme 5).

The Au(I)-catalyzed cycloisomerization reaction of substrate 10 occurred under the catalysis of 5 mol % [1,3-bis(2,6-diisopropylphenyl)imidazol-2-ylidene]gold(I) chloride (IPrAuCl) and 5 mol % silver hexafluoroantimonate (AgSbF6) [25,26] in anhydrous DCM at room temperature for 2 h forming a benzene ring smoothly, leading to the exclusive formation of biaryl intermediate 11 in a yield of 82%. It is worth noting that the methoxy substitution in the substrate played a crucial role in controlling the selectivity of the cycloisomerization according to our previous study [15]. It was rationalized that the electron-donating phenyl ring enabled the coordination of the alkyne with the Au+ complex in the α-position, which promoted the silyl ether to attack the β-position of the alkyne to promote a 6-endo-dig cyclization. Next, compound 11 was subjected to a solution of tetrabutylammonium fluoride (TBAF) in tetrahydrofuran (THF), resulting in the formation of naphthol 12 [12,13], a key intermediate in the previous total synthesis of macarpine (1) reported by Ishikawa (Scheme 6).

To simplify the synthetic procedure, a more straightforward strategy was proposed by using alkynyl ketone 9 [27-29] as the substrate for the gold-catalyzed cycloisomerization in the presence of protonic acid. It was supposed that alkynyl ketone 9 would undergo enolization under the acidic conditions, followed by a gold-catalyzed cycloisomerization to provide the naphthol 12.

To test the idea, alkynyl ketone 9 was subjected to different reaction conditions as listed in Table 2. It was observed that both the acids and the temperatures had a great influence on the cycloisomerization. An attempt was also made by using only p-toluenesulfonic acid (TsOH) in the cycloisomerization step, but no corresponding product was obtained. Finally, the optimal conditions for the Au(I)-catalyzed cycloisomerization of alkynyl ketone 9 were determined as to stir the substrate under the catalysis of 5 mol % IPrAuCl/AgSbF6 with 2 equiv of TsOH as the additive at 70 °C for 2 h (Table 2, entry 3). It is notable that our synthetic route to naphthol 9 is shorter and proceeds with higher yield (5 steps, 59% yield) than Ishikawa’s route (9 steps, 13% yield).

In summary, the formal total synthesis of the natural product macarpine was achieved through two synthetic routes by synthesizing Ishikawa’s naphthol intermediate via Au(I)-catalyzed cycloisomerizations. Compared to the route reported in the literature, these routes are more concise and easier to perform. This gold-catalyzed strategy provides a new approach to macarpine and related benzo[c]phenanthridine alkaloids and the application of this strategy to access benzo[c]phenanthridine derivatives and further assessments of their bioactivities are currently in progress in our laboratory.

Y.L. acknowledges the financial support from the National Natural Science Foundation of China (No. 21977073), Natural Science Foundation of Liaoning, China (No. 2022-MS-245) and the Liaoning Provincial Foundation of Educational Department (No. LJKZ0908). The authors would like to thank the Program for the Innovative Research Team of the Ministry of Education and the Program for the Liaoning Innovative Research Team in University.

Pentannulation of N-heterocycles by a tandem gold-catalyzed [3,3]-rearrangement/Nazarov reaction of propargyl ester derivatives: a computational study on the crucial role of the nitrogen atom

© 2022 Fu et al.; licensee Beilstein-Institut.
This is an open access article licensed under the terms of the Beilstein-Institut Open Access License Agreement (https://www.beilstein-journals.org/bjoc/terms), which is identical to the Creative Commons Attribution 4.0 International License (https://creativecommons.org/licenses/by/4.0). The reuse of material under this license requires that the author(s), source and license are credited. Third-party material in this article could be subject to other licenses (typically indicated in the credit line), and in this case, users are required to obtain permission from the license holder to reuse the material. 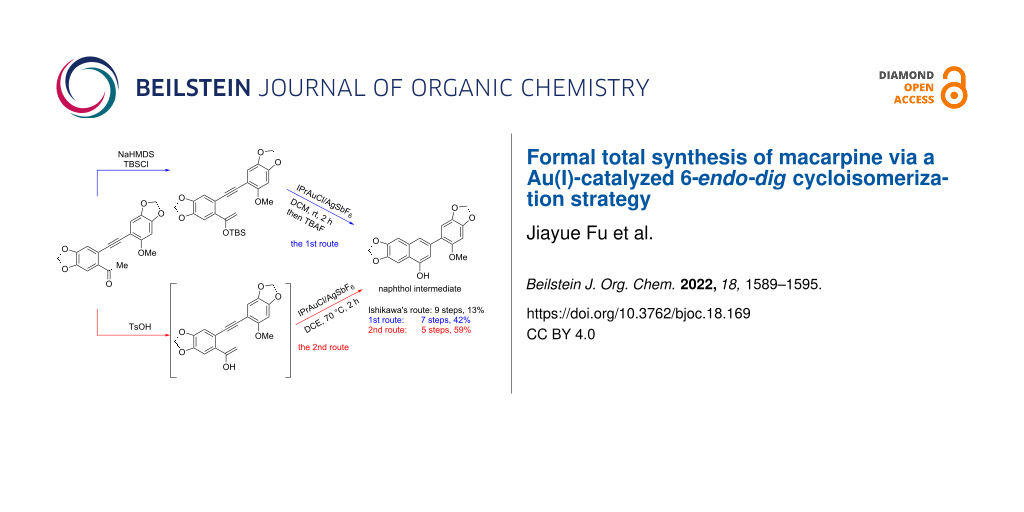