All articles from this author
Ivar Järving

An asymmetric Michael reaction between cyclopentane-1,2-dione and alkylidene oxindole was studied in the presence of a multifunctional squaramide catalyst. Michael adducts were obtained in high enantioselectivities and in moderate diastereoselectivities.

Diketones are generally very versatile starting materials in organic synthesis [1,2]. Specifically, due to their keto–enol tautomerism and high reactivity, diketones are excellent precursors for different pharmaceuticals [3]. Cyclic 1,3-diketones have been widely exploited to access enantiomerically enriched scaffolds with increased molecular complexity. There are many examples of the organocatalytic synthesis of fused cycles starting from the cyclohexane-1,3-dione. For example, Rueping et al. demonstrated that the cyclohexane-1,3-dione undergoes a cascade reaction with α,β-unsaturated aldehydes [4] and they later employed the method to synthesise indoloquinolizidines [5]. Moreover, six-membered and five-membered cyclic 1,3-diketones have been investigated in reactions with acetates of nitroalkenes [6], cyanoacrylates and benzylidene malononitriles [7], ortho-hydroxy-benzhydryl alcohols [8], α,β-unsaturated pyrazolamides [9] and, 2-oxobut-3-enoates [10]. A 1,2-dicarbonyl moiety is also an important structural fragment present in various natural products and biologically active compounds [11]. 1,2-Diketones have been used for the synthesis of photosensitive polymers [12] and substituted imidazoles [13,14] and have been used in carbohydrate chemistry [15]. Cyclic six-membered 1,2-diketones have been shown to react with benzylidene malononitriles [7,16], β-nitrostyrenes [17] and substituted propionaldehydes [18]. For a while, there were no examples related to cyclopentane-1,2-dione (CPD). In 2004, the first instance of using CPD as a precursor for high value-added fine chemicals such as a homocitric acid lactone was published by our group [19]. Since then we have developed synthetic pathways for lycoperdic acid [20] and nucleoside analogues [21] starting from CPD. The organocatalytic methods for the synthesis of substituted cyclopentane diones were uninvestigated until 2014 when we showed that CPD undergoes a Michael addition with nitrostyrenes [22]. Subsequently, different cascade reactions for CPD have been developed: with highly reactive (E)-2-oxobut-3-enoates [23], α,β-unsaturated aldehydes [24] and alkylidene malonates [25].

Herein, we report the results of an asymmetric organocatalytic Michael addition of CPD to alkylidene oxindoles.

Chiral multifunctional thioureas [26,27] and squaramides [28] are extensively used as catalysts in asymmetric Michael additions. We believed that a bifunctional hydrogen-bonding catalyst would activate both CPD via a tertiary amino group of a quinuclidine moiety acting as a base via anion-binding, and an oxindole through the squaramide or thiourea moieties of the catalyst as hydrogen bond donors (Figure 1) [29-32].

Therefore, squaramide and thiourea catalysts were screened in a model reaction between CPD 1 and Boc-protected benzylidene oxindole 2a at room temperature in the presence of 10 mol % of catalyst (Figure 2).

First, the quinidine-derived squaramide A was used and the desired product was obtained as a mixture of chromatographically inseparable diastereoisomers in 53% yield but in low enantiomeric excess for both diastereomers (Table 1, entry 1). With the quinine-derived thiourea B, the reaction was slow and the yield was very low, 12% (Table 1, entry 2). For that reason, we focused on the screening of squaramides. Squaramides were found to be more selective catalysts than thioureas. When squaramide C was used as a catalyst, the product was isolated in 80%/87% ee (major/minor diastereoisomer) (Table 1, entry 3). The enantioselectivity was even higher with the cinchonine-derived squaramide D, 85%/92% (major/minor) (Table 1, entry 4). To further optimise the reaction, we screened different solvents (apolar, polar aprotic, and chlorinated solvents) (Table 1, entries 5–7). According to the obtained results chloroform was clearly superior to other solvents. Previously the isolated yield of the product had been moderate and to increase the yield the substrate concentration was varied. A substantial excess of CPD (five equivalents) led to a very slow reaction and a decrease in enantioselectivity (Table 1, entry 8). It was assumed that the binding between CPD and the catalyst was stronger than the binding between the substituted oxindole and the squaramide decreasing the effective concentration of the catalyst. Taking this into consideration, 2 equiv of substituted oxindole was used and the reaction proceeded smoothly in 2 h in high enantioselectivity (90%/94% ee), in high yield (74%) but in moderate diastereoselectivity (Table 1, entry 9). Next, we looked onto the effect of lower temperature on the reaction. At 0 °C the reaction was approximately 10 times slower and only the ee of the minor diastereoisomer increased by 3% (Table 1, entry 10), so there was no justification for carrying out the reaction at a lower temperature because of the longer time needed.

Next, we screened different protecting groups for the oxindole. Previously, Boc-protected oxindole 2a gave us the product in 75% yield, in dr 2.6:1 and in ee 90%/94% (Scheme 1, 3a). With a Cbz-protecting group the enantioselectivity decreased to 82%/88% (Scheme 1, 3b). The use of a sterically more demanding Fmoc-protecting group decreased the ee values even more for the minor diastereoisomer (Scheme 1, 3c). Surprisingly, with benzyl-protected oxindole, the reaction did not proceed (Scheme 1, 3d), which implies that the carbonyl group of the carbamate moiety in the N-protecting group and electron-withdrawing properties of the protection groups are essential for coordination with the catalyst and for the reactivity of the Michael acceptor. Using a tosyl-protected oxindole the reaction was sluggish, the yield was low and the enantioselectivity could not be determined (Scheme 1, 3e). These experiments revealed that the best results were achieved in chloroform at room temperature with catalyst D, using 1 equiv of diketone and 2 equiv of N-Boc-substituted oxindole 2a.

Under optimised conditions, the substrate scope of the reaction was examined by using various substituted oxindoles with an E-configuration of the double bond. The results are presented in Scheme 2. Both electron-withdrawing (Scheme 2, 3f–h) and electron-donating groups (Scheme 2, 3m,n) at the phenyl ring of the benzylidene moiety were tolerated. The position of the halide at the aromatic ring did not have a major effect on the yield or the enantioselectivity. Ortho-, meta- and para-chlorophenyl-substituted starting materials afforded products in similar enantioselectivities (Scheme 2, 3f–h). However, the reaction was slower with the sterically more hindered ortho-chloro substrate (Scheme 2, 3f). When instead of a benzylidene-containing substrate an alkylidene with an extra ester moiety was used, the enantioselectivity was lost and the product 3i was obtained as a racemic mixture. Either additional coordination with the catalyst or a lack of π–π-interaction may have been responsible for that. Also, a higher C–H acidity of the proton at the stereogenic centre and possible racemisation can’t be excluded. A heteroaromatic oxindole derivative afforded the product 3j in lower yield and high ee values. 4- and 5-bromo oxindole derivatives (2l and 2k, respectively) were also used as starting compounds. If the substituent in the oxindole ring was further from the reaction centre, the outcome was not affected (Scheme 2, 3k). However, when using a 4-bromo-substituted oxindole, the reaction was slower, the yield drastically decreased and the enantioselectivity was moderate (Scheme 2, 3l). The reaction with an electron-donating p-MeO-substituted benzylidene oxindole was very sluggish and did not reach full conversion (Scheme 2, 3m). The product 3m was obtained with only 36% yield and with undetermined enantiomeric purity, since the peaks were not separable in various HPLC methods. Similarly, the p-Me-substituted oxindole was also slow in reacting and the yield was moderate, but the enantioselectivity remained high (Scheme 2, 3n). The reaction tolerated alkylidene oxindoles, although the product was obtained in a slightly lower yield and enantioselectivity (Scheme 2, 3o). The reaction did not occur when starting compound 2p was tried. This was probably because of the very poor solubility of the starting material. Generally, the diastereoselectivities of the reactions were moderate (dr 2.1:1–3.6:1) throughout the scope. The diastereoselectivity was missing or was very low for the compounds with non-aromatic substituents at the double bond (3i and 3o).

In all previous experiments only E-isomers were used. In the case of the 3-nitro-substituted starting material 2q we managed to separate isomers and carried out the reaction with both the E- and Z-isomer. In these experiments, both isomers afforded the same major diastereoisomer but opposite enantiomers (Scheme 3, 3q). The diastereoselectivities were similar for the isomers.

Since the diastereoselectivity of the reaction was low, we attempted to increase the ratio of diastereoisomers via enolisation followed by diastereoselective protonation (Table 2). As the racemate of 3a was obtained in a higher diastereomeric ratio (6.3:1) we applied kinetic and thermodynamic conditions for the epimerisation of it (Table 2, entries 1 and 2, respectively). Unfortunately, in both cases the diastereomeric ratio decreased and the amount of more stable syn diastereoisomer increased. A similar trend was observed when starting from the enantiomerically enriched 3a (Table 2, entry 3).

It has been shown that substituted oxindoles can be converted to indolopyrans via intramolecular cyclisation [33]. We also tried synthesizing 4H-pyrans in acidic conditions but no cyclised product was detected.

In summary, we have developed a new asymmetric organocatalytic Michael addition of cyclopentane-1,2-dione to alkylidene oxindoles catalysed by bifunctional squaramide which leads to products in high enantioselectivities and moderate diastereoselectivities. The scope of alkylidene oxindoles is reasonably wide including aromatic and aliphatic substituents at the double bond and also substituents in the oxindole core. The work widens the synthetic utility of cyclopentane-1,2-diones.

The authors thank the Estonian Ministry of Education and Research (Grant No. PRG1031) and the Centre of Excellence in Molecular Cell Engineering (2014-2020.4.01.15-0013) for financial support.

© 2022 Silm et al.; licensee Beilstein-Institut.
This is an open access article licensed under the terms of the Beilstein-Institut Open Access License Agreement (https://www.beilstein-journals.org/bjoc/terms), which is identical to the Creative Commons Attribution 4.0 International License (https://creativecommons.org/licenses/by/4.0). The reuse of material under this license requires that the author(s), source and license are credited. Third-party material in this article could be subject to other licenses (typically indicated in the credit line), and in this case, users are required to obtain permission from the license holder to reuse the material. 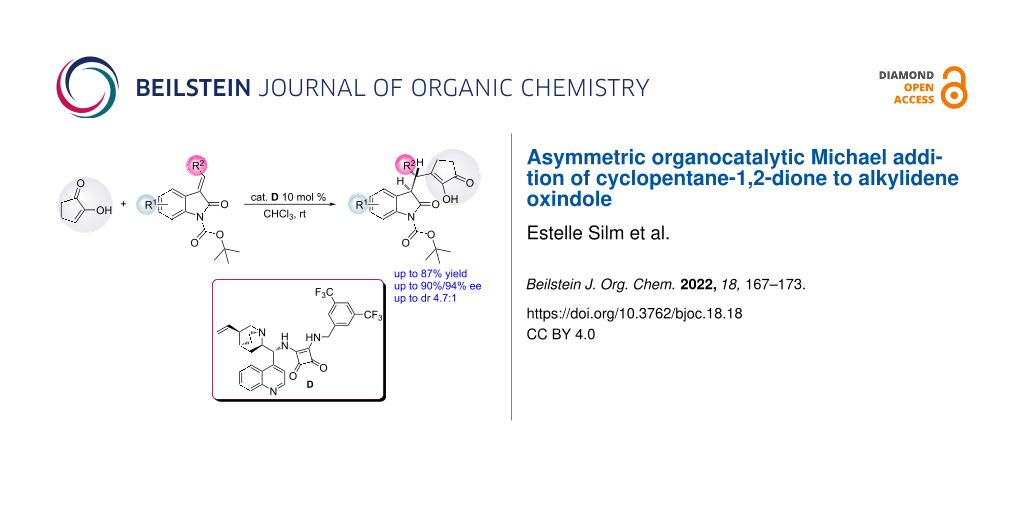