All articles from this author
Narendra Kumar Vaishanv


All articles from this author
Sandeep Kumar


All articles from this author
Raja Krishnan Purshottam


All articles from this author
Ruchir Kant


All articles from this author
Kishor Mohanan

A practical enantioselective N-selective nitroso aldol reaction of α-methylmalonamates with a nitrosoarene is reported. The reaction employs the Takemoto thiourea catalyst for the induction of enantioselectivity, and the corresponding optically active oxyaminated malonamates were obtained in reasonably good yields.

Nitrosoarenes are versatile building blocks frequently encountered in organic synthesis as precursors for the synthesis of nitrogen and oxygen-containing molecules [1-5]. The high reactivity caused by the polarization of the N–O bond enables the nitrosoarenes to undergo a wide range of transformations in a chemo- and regioselective manner [6-8]. The noteworthy and widely explored transformations of nitrosoarenes include nitroso ene reactions [9-11], Diels–Alder cycloadditions [12-18], and nitroso aldol reactions [19-23]. Among the various applications of nitrosoarenes, the asymmetric nitroso aldol reaction to achieve optically active α-aminoxy and α-hydroxyamino carbonyl compounds has received considerable attention in the past decades [24]. In 2003, the Yamamoto group demonstrated for the first time that nitrosobenzene could be used as a practical reagent for the catalytic enantioselective α-aminoxylation using a silver-BINAP catalyst combination [25]. Later, the same group could successfully tune the catalytic system to control the regioselectivity in the addition of metal enolate to nitrosoarenes to achieve an α-hydroxyamination [26]. Since then, several groups have shown the use of metal-catalyzed nitroso aldol reactions as a practical tool for the selective introduction of amino or hydroxy moieties at the α-position of a carbonyl function [27-30].

Having identified the optimal reaction conditions, we proceeded to evaluate the generality of this nitroso aldol reaction with respect to the amide component of malonamate (Scheme 2). Pleasingly, our strategy was found to be operational with malonamates bearing electronically different substituents such as halo, nitro, acetyl, and alkyl at the para-position of the phenyl ring and the corresponding oxyaminated products were obtained in excellent yields and good enantioselectivities (4a–f). The single crystal X-ray analysis of the product 4a established the absolute stereochemistry which was found to be S (Figure 1) [62]. There was a significant drop in the enantioselectivity when malonamates bearing substitutions at meta- and ortho-positions were used, except for the reaction carried out using methoxy substitution at the 3-position where the corresponding oxyaminated product was obtained in 75% yield and 80% ee (4g–j). The disubstituted malonamates underwent facile oxyamination, and the products were obtained in excellent yields and enantioselectivities (4k, 4l). Of note, the reaction was also feasible with heterocyclic malonamate, albeit with moderate yield and enantioselectivity (4m). Aliphatic malonamate was also found viable for this transformation, giving the oxyaminated product in good yield and moderate enantioselectivity (4n).

Subsequently, the scope of the transformation was investigated with various alkyl esters of malonamate (Scheme 3). In addition to the methyl ester, the reaction was found to proceed smoothly with ethyl, tert-butyl, and p-methoxybenzyl esters of malonamate to furnish the oxyaminated products in good yields and moderate to good enantioselectivities (4o–u). Pleasingly, the reactions carried out using m-methoxybenzyl and 3,4,5-trimethoxybenzyl esters of malonamate afforded the corresponding products in good yields and enantioselectivity (4v, 4w). The scope was further expanded by carrying out a reaction using o-methylnitrosobenzene, and in this case, the reaction proceeded smoothly to afford the corresponding oxyaminated product, albeit with low enantioselectivity (4x, 4y). Disappointingly, the reactions carried out by varying the α-substitution did not afford the desired product.

In order to demonstrate the synthetic utility of the oxyaminated compounds, the reductive cleavage of the N–O bond was attempted under Zn/AcOH conditions. Pleasingly, the reaction afforded the aniline derivative in good yield, albeit with a considerable diminishment in the ee (Scheme 4).

Based on the literature reports and the stereochemical outcome, a plausible transition state is proposed, as shown in Figure 2. The activation of nitrosobenzene was achieved by the intramolecular hydrogen-bonding of the thiourea moiety with the oxygen of the nitrosobenzene. The tertiary amine, present in the catalyst acts as a base in assisting the deprotonation of the highly acidic malonamate to generate the corresponding enolate. Subsequently, a face-selective nucleophilic addition of the enolate to nitroso selective takes place to afford the nitroso aldol product.

In summary, an efficient organocatalytic asymmetric nitroso aldol reaction of α-methylmalonamate has been reported. The reaction utilizes the well-known Takemoto catalyst, and this protocol demonstrates for the first time the use of malonamate as a pro-nucleophile in an enantioselective addition reaction. The mild reaction conditions allow the use of various functionalized malonamates. Given the importance of highly functionalized α-amino acid derivatives, the present strategy could be useful in generating a wide range of α-oxyamino malonamates which may serve as a potential platform for the synthesis of medicinally relevant structural units.

We thank Dr. Tejender S. Thakur, MSB division, CSIR-CDRI for supervising the X-ray data collection and structure determination. The SAIF division is acknowledged for the analytical support. CDRI Communication No. 10366.

© 2022 Gupta et al.; licensee Beilstein-Institut.
This is an open access article licensed under the terms of the Beilstein-Institut Open Access License Agreement (https://www.beilstein-journals.org/bjoc/terms), which is identical to the Creative Commons Attribution 4.0 International License (https://creativecommons.org/licenses/by/4.0). The reuse of material under this license requires that the author(s), source and license are credited. Third-party material in this article could be subject to other licenses (typically indicated in the credit line), and in this case, users are required to obtain permission from the license holder to reuse the material. 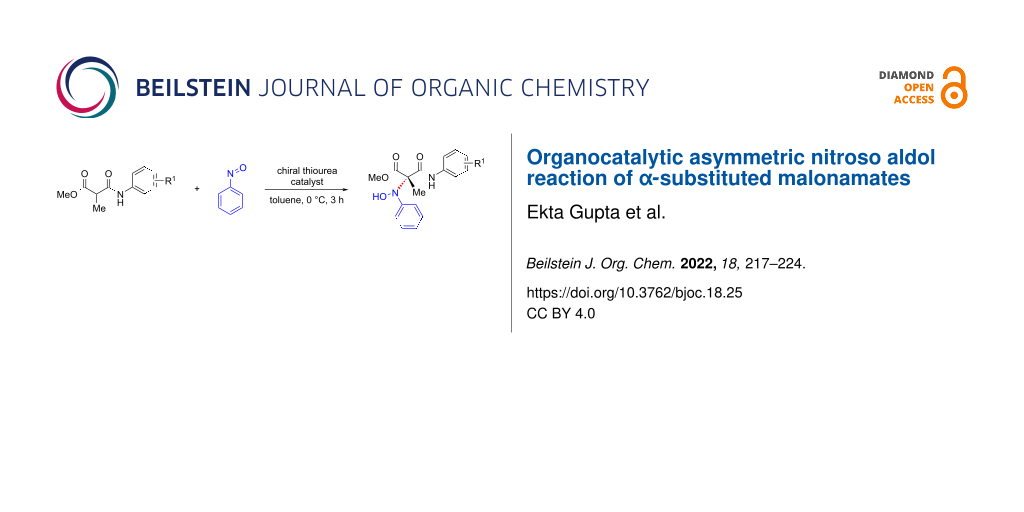