All articles from this author
Chhanda Mukhopadhyay

An efficient tosylhydrazine-mediated conjugate reduction of 3-phenacylideneoxindole and sequential Michael/intramolecular aldol reaction is reported under base-catalyzed conditions towards the formation of densely substituted dispirocyclopentanebisoxindole derivatives. The reaction proceeded in a diastereoselective manner to afford four chiral stereocenters. The method also has advantages of wide substrate scope, readily available starting materials and operational simplicity through one pot reaction.

There is a vast demand of the structurally complex spirooxindole scaffold which is an important structural motif that is embodied in a number of bioactive natural products and medicinally relevant compounds [1,2]. Among various spirooxindole motifs, bispirooxindoles fusing two spirooxindole cores exhibit a wide range of important biological activities, for example, anticancer, antitubercular, antidiabetic, antibacterial as well as cholinesterase inhibition (Figure 1) [3-7]. These unique chemical and biological characteristics of bispirooxindoles have stimulated the concentration of the synthetic community on developing new synthetic strategies towards their synthesis [8-14].

Chemical hydrogenation of double bonded compounds like α,β-unsaturated ketones, approaching to saturated ketones, is an important functional group transformation for the synthesis of heterocyclic and carbocyclic building blocks and reactive intermediates. Besides the use of various reducing agents, it is observed that tosylhydrazine develops the transition-metal-free and highly chemoselective conjugate reduction of α,β-unsaturated ketones [29]. Using this method, we developed the in situ reduction of 3-phenacylideneoxindoles by tosylhydrazine and sequential Micheal addition/cyclization with another molecule of 3-phenacylideneoxindole towards bisspirocyclopentenebisoxindole derivatives. Although Shanthi et al. [30] reported the In(III)-catalyzed reductive cyclization of isatylidene malononitriles using the Hantzsch ester as reducing agent for the synthesis of dispirocyclopentanebisoxindole. Our work utilizes tosylhydrazine as chemoselective reducing agent for 3-phenacylideneoxindoles and thereafter base-catalyzed dimerization produces dispirocyclopentanebisoxindoles in a transition-metal-free protocol (Scheme 1).

There is extensive application of 3-phenacylideneoxindoles generating diverse reaction strategies following the regioselective and diastereoselective synthesis of carbocyclic and heterocyclic frameworks [31,32]. During our preliminary investigations as shown in Table 1, we commenced our study by reacting two equivalents of (E)-3-(2-(4-chlorophenyl)-2-oxoethylidene)indolin-2-one (1a) under reflux conditions with one equivalent of tosylhydrazine (2) as hydrogen source in ethanolic solution in the presence of K2CO3 as base. After the reaction was completed, we observed that the reductive cyclo-dimerization occurs smoothly to give the corresponding dispirocyclopentanebisoxindole 3a in 68% isolated yield with good diastereoselectivity (>95:5 dr) (Table 1). NMR and HRMS analyses confirm the structure of the product 3a. With 3-phenacylidene oxindole 1a and tosylhydrazine (2) as model substrates, we started the optimization of the reaction upon various parameters such as temperature, base and solvent. A variety of bases were examined in the reaction, both inorganic and organic bases were well acted for this reductive cyclization, among the bases screening, Et3N was the most effective when employed with a particular solvent (Table 1). In order to improve the yield of the reaction we optimized the reaction temperature and it was found that the reaction at 60 °C gave a satisfying yield of 82% with reduced reaction time (Table 1).

Solvents also played an important role and the effect of solvents on this reductive cyclization was also examined. A moderate yield was obtained when MeOH, EtOH or dioxane were employed as solvent. Unfortunately, when the reaction was conducted in a less polar solvent like toluene or DCM the desired product was not obtained. After investigatiing different solvents, it was revealed that CH3CN is the perfect solvent of choice (Table 1). Together, this screening resulted in the optimal conditions, which are: 1a (1 mmol), 2 (0.5 mmol) and Et3N (0.5 mmol) in CH3CN medium at 60 °C (Table 1, entry 3). With these optimized conditions in hand, we explored the scope of this transformation. At first we investigated the substrate scope of 3-phenacylideneoxindoles varying substitution patterns and it was observed that 3-phenacylideneoxindoles with various substitutions on the indoline ring could be unambiguously converted into the corresponding products (Scheme 2, Scheme 3). Halo-substituted indolines (5-Cl, 5-Br) were found to furnish the desired products in good yields (70–80%) which provided possibilities of further functionalization. In addition, the electronic nature of the substituent on the aryl ring of 1 was examined and believed to have subtle influence on the yield of the product. The aryl ring with an electron-withdrawing group at the para position (3a, 3d, 3f and 3w) and electron-donating group at the para and meta position (3c, 3g, 3i, 3l, 3n, 3o, 3q, 3s, 3t and 3x) gave a good yield of the corresponding product, respectively. Here also, the halo-substituted aryl ring on 1 can be further used for transition-metal-catalyzed cross coupling reactions, thus providing a very good application. Then the effect of N-protecting groups on the indoline ring was also investigated. Varieties of N-protected (Me, Et, propyl, benzyl and allyl) 3-phenacylideneoxindoles were used and provide good to excellent yield of the dimerized products (Scheme 2, Scheme 3). During the detailed study of the reaction, we conducted the reaction with 2-(2-oxindole-3-ylidene)acetate, but unlike 3-phenacylideneoxindole this substrate does not take part in the reductive cyclization.

In the prepared dispirocyclopentylbisoxindoles, there are four diastereomeric centers in the newly formed cyclopentane ring, so there is a possibility for existence of many diastereomers for each product, but the single crystal X-ray diffraction analysis confirmed the diastereoselectivity of 3. A single crystal of 3g was successfully obtained by slow evaporation of the solvent with the structure unequivocally confirmed by X-ray diffraction analysis (Figure 2). The single crystal X-ray diffraction analysis also revealed the presence of four chiral stereocenters with two oxindole moieties at 1,3-possition that are in trans orientation to the 2-benzoyl group and the 5-aryl group is in cis orientation (Figure 2). This observation proved that the most thermodynamically stable diastereomer was formed by multistep reaction progression where, to overcome severe steric hindrance, two oxindole moieties are in trans orientation. HPLC data of compound 3o ensures >95:5 dr (Supporting Information File 1).

In order to explain the formation of dispirocyclopentanebisoxindole after studying some related literatures [23-25,29] a plausible reaction mechanism is shown in Scheme 4. At first, tosylhydrazine as hydride source [29] promotes reduction of 3-phenacylideneoxindole towards 3-phenacylindolinone A. Then, under basic conditions, the carbanion of 3-phenacylindolinone, which acts as Michael donor, is formed. After this the carbanion undergoes Michael addition with another molecule of 3-phenacylidieneoxindole to yield intermediate B. Finally, an intramolecular aldol condensation takes place between the carbanion and the carbonyl group of intermediate B towards the formation of the dispirocyclopentanebisoxindole derivative.

To support the proposed mechanism at first we performed an HRMS analysis of the crude reaction mixture before completion of the reaction, starting with (E)-1-methyl-3-(2-oxo-2-phenylethylidene)indolin-2-one (1j) and tosylhydrazine under the optimized reaction conditions. To our delight, the HRMS spectrum clearly shows the peaks of the corresponding intermediate A at 266.1195 [M + H] and final product 3j at 529.2141 [M + H] (Figure 4).

Further we attempted a study to isolate the corresponding intermediate A. We carried out a reaction by taking an 1:1 equivalent mixture of tosylhydrazine and (E)-1-methyl-3-(2-oxo-2-phenylethylidene)indolin-2-one (1j) in acetonitrile with Et3N catalyst under refluxing conditions, and isolated the corresponding saturated ketone 1-methyl-3-(2-oxo-2-phenylethyl)indolin-2-one (4j) in 60% yield, which results from reduction of the double bond of α,β-unsaturated ketone (Scheme 5). The structure of compound 4j was determined by NMR spectral data. After that we conducted another reaction between saturated ketone 4j with unsaturated ketone (E)-1-methyl-3-(2-oxo-2-phenylethylidene)indolin-2-one (1j) under base-catalyzed conditions, gratifyingly we obtained our desired product dispirocyclopentanebisoxindole 3j. Therefore, we can conclude that 3-phenacylindolinone is in situ generated in the reaction medium from reduction of 3-phenacylidieneoxindole by tosylhydrazine, which undergoes cyclodimerization with another equivalent of 3-phenacylidieneoxindole under base-catalyzed conditions. This study also proves that two equivalents of 3-phenacylideneoxindole are required for reductive cyclodimerization.

In conclusion, we have successfully developed a simple and efficient methodology towards the one-pot synthesis of dispirocyclopentanebisoxindole derivatives through base-catalyzed reductive cyclization of two molecules of 3-phenacylideneoxindoles. In this reaction tosylhydrazine serves as reducing agent to reduce one molecule of 3-phenacylideneoxindole to 3-phenacylindolinone which, under base-catalyzed conditions, involves a sequential Michael addition/intramolecular aldol condensation with another molecule of 3-phenacylideneoxindole to give dispirocyclopentanebisoxindoles. The notable advantage of this method is a metal-free reducing agent, mild reaction conditions, readily available starting materials and variety of substrates. Further investigation towards the application of this methodology and structural diversifications of this moiety are underway in our laboratory.

General method: All commercially available chemicals were purchased from Aldrich, USA or Spectrochem, India, and used without further purification. All solvents were used as received. The progress of the reaction was checked by TLC glass sheets pre-coated with silica gel (with binder, 300 mesh, Spectrochem) and column chromatography was performed using silica gel (100–200 mesh). Bruker 300 MHz and 400 MHz instruments were used for 1H and 13C NMR spectra at 300 MHz, 400 MHz and 75 MHz, 100 MHz respectively. Chemical shifts are reported in parts per million (ppm) downfield from an internal TMS (tetramethylsilane) reference. Coupling constants (J) are reported in hertz (Hz), and spin multiplicities are represented by the symbols s (singlet), brs (broad singlet), d (doublet), t (triplet), q (quartet) and m (multiplet). HRMS with an ESI resource were acquired using a Waters XEVO-G2S Q TOF mass spectrometer. HPLC were recorded using an Agilent 1200 Series auto sampler HPLC system. Melting points were recorded with an open capillary on an electrical melting point apparatus and the single crystal structure of the synthesized compound was confirmed by an X-ray crystallography experiment on a Bruker SMART diffractometer.

General procedure for the synthesis of compound 3: In a manner similar to [28], 3-phenacylideneoxindole (1 mmol), tosylhydrazine (0.5 mmol) and Et3N (1 equivalent) were added with 6 mL CH3CN in a dry 10 mL round bottomed flask provided with a reflux condenser. Then the reaction mixture was stirred at 60–70 °C for 6 hours. After reaching the completion, the reaction mixture was examined by TLC. Then the reaction mixture was cooled to room temperature, diluted with 10 mL of water and extracted with EtOAc (3 × 10 mL). The organic layers were combined and washed with brine, then dried over anhydrous Na2SO4. After the solvent was removed under reduced pressure, the crude product was purified by column chromatography using 100–200 mesh silica gel and petroleum ether–ethyl acetate mixture as the eluent to afford the desired product 3.

The analytical team of TCGLS is gratefully acknowledged.

One of the authors (SP) thanks to the Council of Scientific and Industrial Research (CSIR), New Delhi, for his fellowship (SRF). We also are grateful to CAS-V, DST-FIST and DST-PURSE Department of Chemistry, University of Calcutta for funding as departmental projects.

© 2022 Pramanik and Mukhopadhyay; licensee Beilstein-Institut.
This is an open access article licensed under the terms of the Beilstein-Institut Open Access License Agreement (https://www.beilstein-journals.org/bjoc/terms), which is identical to the Creative Commons Attribution 4.0 International License (https://creativecommons.org/licenses/by/4.0). The reuse of material under this license requires that the author(s), source and license are credited. Third-party material in this article could be subject to other licenses (typically indicated in the credit line), and in this case, users are required to obtain permission from the license holder to reuse the material. 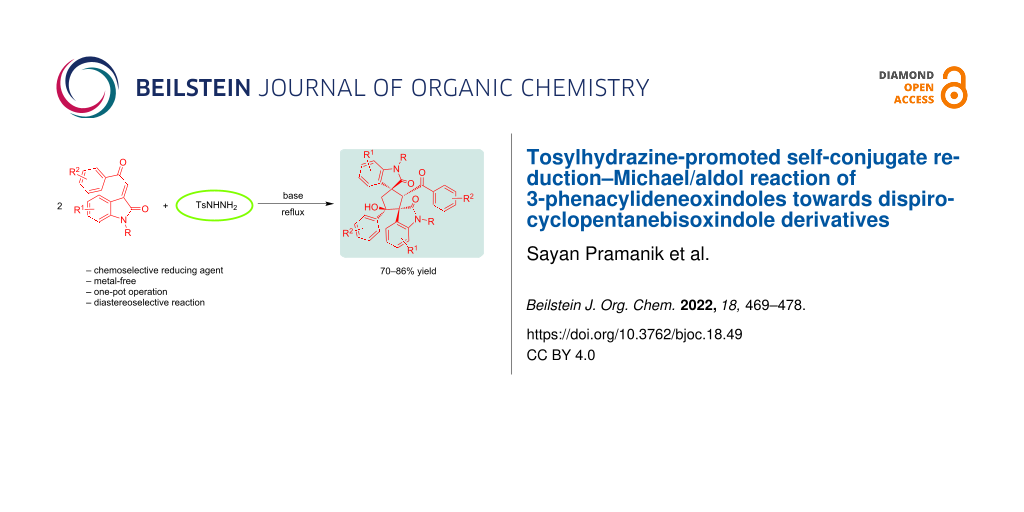