A series of 26 novel 1-(7-chloroquinolin-4-yl)-4-nitro-1H-pyrazoles bearing a dichloromethyl and an amino or thio moiety at C3 and C5 has been prepared in yields up to 72% from the reaction of 1,1-bisazolyl-, 1-azolyl-1-amino-, and 1-thioperchloro-2-nitrobuta-1,3-dienes with 7-chloro-4-hydrazinylquinoline. A new way for the formation of a pyrazole cycle from 3-methyl-2-(2,3,3-trichloro-1-nitroallylidene)oxazolidine (6) is also described. In addition, the antimalarial activity of the synthesized compounds has been evaluated in vitro against the protozoan malaria parasite Plasmodium falciparum. Notably, the 7-chloro-4-(5-(dichloromethyl)-4-nitro-3-(1H-1,2,4-triazol-1-yl)-1H-pyrazol-1-yl)quinoline (3b) and 7-chloro-4-(3-((4-chlorophenyl)thio)-5-(dichloromethyl)-4-nitro-1H-pyrazol-1-yl)quinoline (9e) inhibited the growth of the chloroquine-sensitive Plasmodium falciparum strain 3D7 with EC50 values of 0.2 ± 0.1 µM (85 ng/mL, 200 nM) and 0.2 ± 0.04 µM (100 ng/mL, 200 nM), respectively. Two compounds (3b and 10d) have also been tested for anti-SARS-CoV-2, antibacterial, and cytotoxic activity.

Tropical malaria remains one of the most devastating human diseases with over half of the world’s population being at risk of infection. In 2019, there were 229 million cases of malaria worldwide resulting in an estimated 409,000 fatalities [1]. Chloroquine has been utilized extensively for decades because of its efficacy, safety, and low cost. However, the widespread resistance of Plasmodium falciparum to chloroquine has hampered efforts to combat malaria [2] resulting in artemisinin-based combination therapies as currently recommended standard. Notably, the use of chloroquine, hydroxychloroquine, and amodiaquine (Figure 1) against a SARS-CoV-2 infection is currently under discussion [3-7].

As the 4-amino-substituted 7-chloroquinoline is the essential fragment of chloroquine and its derivatives, we have designed and synthesized a series of pyrazoles containing this fragment in position 1 of the pyrazole ring with the aim to obtain new compounds with antimalarial and/or anti-SARS-CoV activity. Polyhalo-1,3-butadienes, carrying at least one nitro group, are valuable starting materials for the directed synthesis of highly functionalized heterocycles. During the past years, we have reported on the syntheses of a wide range of diverse substance classes applying this useful starting material. In the course of our studies concerning polyhalogenated nitrodienes, in many cases 2-nitroperchlorobuta-1,3-diene (1) [8-10] or nitrotrichloroethylene [11-13] have proved as appropriate precursors for a diverse variety of synthetically and/or physiologically interesting chemical compounds. Recently, we have developed an efficient method for the synthesis of persubstituted nitropyrazoles from diene 1 [14].

In this paper we are describing the formation of uniquely persubstituted 1H-pyrazoles with four different substituents: in position 1 of the pyrazol cycle a 7-chloroquinolin-4-yl unit, in position 3 various amino or thio fragments, in position 4 a nitro and in position 5 a dichloromethyl group. Some biological activities of 7-chloroquinolinyl-substituted pyrazole derivatives have already been described in the literature [15-18]. The antimalarial activity of chloroquinolinyl-pyrazoles, synthesized from the reaction of 1,1,1-trifluoro-4-methoxy-3-alken-2-ones with 4-hydrazinyl-7-chloroquinoline, has been evaluated in vitro against a chloroquine-resistant Plasmodium falciparum strain [19]. Certain 7-chloroquinolinyl-pyrazole derivatives have also shown antibacterial [20], hypoglycemic as well as antioxidant activity [21] or can be used as selective nonpeptide neurotensin receptor type 2 compounds [22]. Some azolylquinolines have been used as agrochemical fungicides, such as 7-chloro-4-(4-trimethylsilylethynyl-1-pyrazolyl)quinoline at 100 ppm which gave a 100% curative effect in barley infected with barley powdery mildew [23]. A statistical model to predict the structural requirement of 4-(5-trifluoromethyl-1H-pyrazol-1-yl)chloroquine derivatives to inhibit Plasmodium has been developed and is reported in the literature [24].

The vinylic SN reaction of 2-nitroperchlorobutadiene (1) with four equivalents of the azoles such as 1H-pyrazole, 1H-1,2,4-triazole, or 1H-benzotriazole affords similarly to [25] the corresponding 1,1-bisazolylbutadienes 2a–c with up to 98% yield (Scheme 1). The regiospecificity is caused by the fact that the LUMO of diene 1 is located preferentially at the dichloronitrovinyl fragment, and to an extent of 67% (by using MINDO/3 as semi-empirical method for the quantum calculation of the molecular electronic structure) to 85% (by using MNDO) at the C1 carbon atom [8]. The treatment of the azolylbutadienes 2 with 7-chloro-4-hydrazinylquinoline in methanol at room temperature using triethylamine as a base leads to the formation of the 7-chloro-4-(5-(dichloromethyl)-3-azolyl-4-nitro-1H-pyrazol-1-yl)quinolines 3a–c in moderate yields (58–69%).

A conceivable mechanistic pathway for the reaction cascade to pyrazoles 3 is shown in Scheme 2. Initially, a first molecule of the strong nucleophile 7-chloro-4-hydrazinylquinoline is assumed to react with the nitrodiazolylvinyl subunit of 2 to give butene A. 1,2-Elimination of an azole from A leads to formation of an isolable diene B. Upon further heating, the amino group attacks the electrophilic C–Cl position of the trichlorovinylic group intramolecularly, leading to a 2,3-dihydro-1H-pyrazole C. Finally, pyrazoles 3 are obtained upon 1,3-elimination of hydrochloric acid.

The next step of our investigation was the two-step synthesis of persubstituted aminopyrazoles 5 upon reaction of the benzotriazolyl derivative 2c with primary, secondary, aliphatic, or (het)aromatic amines (first step) and successive reaction of the obtained dienes 4 with 7-chloro-4-hydrazinylquinoline. Thus, the reaction of compound 2c with methylamine, 1,2,3,4-tetrahydroisoquinoline, 1-methyl-1,2,3,4-tetrahydroisoquinoline, (2-fluorophenyl)methylamine, and 5-methylisoxazolyl-3-amine proceeded smoothly under mild conditions (methanol, 0 °C to rt), similarly to the previously obtained dienes 4b–e [14], 4f [9], 4i [14], 4j [9], 4k [26], and 4m,n [27], and led to dienes 4a, 4g, 4h, 4l, and 4o, respectively, in yields of 52–85%. The subsequent treatment of the butadienes 4 with 2.20 equivalents of 7-chloro-4-hydrazinylquinoline in methanol or ethanol led to the formation of pyrazoles 5 in strongly varying yields (5–72%) and dual orientation (either 3,5- or 5,3-positions) of an amino and dichloromethyl unit in the pyrazole (Scheme 3).

The obtained 13C NMR data of pyrazoles 5 match the calculated NMR shifts (Table S1 in Supporting Information File 1). The predicted and found data for compounds 5a and 5b correspond well and thus support our assumptions regarding the orientation of the nucleophilic attack of 7-chloro-4-hydrazinylquinoline to nitrodienes 4.

Further, we developed a new way for the formation of a pyrazole cycle from oxazolidine 6 and a hetarylhydrazine. The oxazolidine 6 was synthetized under mild reaction conditions either from nitrodiene 1 (yield 58%) or from the benzotriazolyl derivative 2c (yield 76%). The increase in yield in case of 2c supports the suggestion that the benzotriazolyl subunit is a better leaving group compared to chlorine [28]. The reaction of oxazolidine 6 with 2.3 equivalents of 7-chloro-4-hydrazinylquinoline in toluene at 90–95 °C for 30 h led to the formation of pyrazole 7 (yield 23%) together with considerable amounts of a resin (Scheme 5). We suggest that the lower yield of alcohol 7 is due to the poor leaving group quality of the formal alkoxide.

A conceivable mechanistic pathway for the reaction cascade to pyrazole 7 is shown in Scheme 6. Initially, a nucleophilic attack of the NH2 group of 7-chloro-4-hydrazinylquinoline on the C2 position of the oxazolidine ring of 6 leads to the formation of imidoacetal D. Due to free rotation of the (O,N,N)C–C(NO2) axis the suitable conformer E can be formed. Thus, the less hindered NH group of intermediate E interacts with the C3 position giving an intramolecular, five-membered addition product F. Upon elimination of HCl from F by means of the second equivalent of 7-chloro-4-hydrazinylquinoline as base the triazaoxaspiro system G is formed. Finally, pyrazole 7 is obtained via intramolecular rearrangement of G under thermodynamic control.

Further, the solventless treatment of nitrodiene 1 with equimolar amounts of thiols led to the formation of sulfanes 8a–e in 67–88% yields (Scheme 7). The sulfanes 8a–e were formed as single isomers, among them 1,3,4,4-tetrachloro-1-(4-chlorophenylsulfanyl)-2-nitrobuta-1,3-diene (8e) as E-isomer (X-ray) [29]. Thiodienes 8a–e reacted with equimolar amounts of 7-chloro-4-hydrazinylquinoline in DCM at room temperature using triethylamine as base to give the corresponding 3-thiopyrazoles 9a–e in moderate yields (28–69%). By oxidation of sulfane 9d with m-chloroperbenzoic acid in chloroform at room temperature the sulfoxide 10d was obtained in 43% yield (Scheme 7).

For comparing the biological activity of the newly synthesized, push–pull-substituted pyrazoles with the monosubstituted parent system, 11 was synthesized in 34% yield according to the literature [18] (Scheme 8). This proceeding corresponds well with our earlier publications on the microbiological activity of highly substituted pyrazoles [30-33]. Therefore, we hypothesize that the (NO2)C–C(CHCl2) and similar subunits could be valuable pharmacophores. Further investigations are on the way.

The general cytotoxic activities of compounds 3b and 10d were studied, as they influence the applicability of the compounds in other assays comprising mammalian cells. We incubated the murine fibroblast L929 cell line with different concentrations of the compounds for 72 h and quantified the residual viability of the cells. Non-linear regression of the dose–response data led to IC50 values of 1.4 µM for 3b and of 0.6 µM for 10d. Thus, for both compounds similar cytotoxic properties in the low µM range were determined.

The compounds were also tested in a viral infection model comprising SARS-CoV-2 and VeroE6 cells. However, no specific antiviral properties could be discovered, as the results were dominated by the cytotoxicity of the compounds. For details see Supporting Information File 1.

Furthermore, we evaluated the antibacterial properties of 3b and 10d. Growth of the Gram-positive bacterial strain Staphylococcus aureus was clearly inhibited with IC50 values of 15 µM (3b) and 30 µM (10d), whereas the growth of Escherichia coli, which was used as representative of Gram-negative strain, was hardly affected.

The activity of the 26 pyrazoles was tested against the asexual blood stages of the malaria parasite P. falciparum (3D7 strain) using the SYBR Green I-based fluorescence assay [35]. Table 1 summarizes the activity of the compounds against the red blood cell stages of P. falciparum with EC50 values ranging from high nanomolar (200 nM) to low micromolar concentrations (4 µM). The compounds with the highest antimalarial activity were 3b, 9e, 3a, and 10d with EC50 values of 0.2 ± 0.1 µM, 0.2 ± 0.04 µM, 0.3 ± 0.1 µM and 0.34 ± 0.01 µM, respectively. Unsubstituted 1-(7-chloroquinolinyl)pyrazole 11 was the only compound of this series that showed no inhibition up to a tested concentration of 220 µM (50 µg/mL).

Among the three 3-azolylpyrazoles 3a–c, the triazole derivative 3b showed the best activity with an EC50 = 0.2 ± 0.1 µM. The 3-aminopyrazoles 5a–o showed a rather broad activity range (EC50 = 0.5–4.1 µM) and were all less active than the azolylpyrazoles 3. The most active 3-aminopyrazoles 5 with very similar EC50 values of about 0.5 μM are representatives of the different classes of compounds: 3,4-dihydroisoquinoline 5g, 4-fluorophenylpiperazine 5k, and isoxazole 5o. Furthermore, among the sulfides 9, the 4-chlorophenylthiopyrazole 9e stands out with an EC50 of 0.2 ± 0.04 µM. Interestingly, the oxidation of the sulfur atom in pyrazole 9d (EC50 = 1.1 ± 0.04 µM) improved the antimalarial activity by a factor of more than three (sulfoxide 10d, EC50 = 0.3 ± 0.01 µM).

In our experiments we used the established antimalarial drug amodiaquine as control. As shown in Table 1, the EC50 of amodiaquine was with 6 nM about two orders of magnitude more active than the newly synthesized and tested compounds.

A two or three-step synthesis of novel 1-(7-chloroquinolin-4-yl)-3(5)-R-4-nitro-5(3)-(dichloromethyl)-1H-pyrazoles 3a–c, 5a–o, and 9a–e has been developed, starting from our synthetic building block 2-nitroperchlorobutadiene (1). 3-(Alkyl)(2-hydroxyethyl)aminopyrazoles 7 are accessible from the reaction of oxazolidine derivative 6 with 7-chloro-4-hydrazinylquinoline. Oxidation of sulfane 9d led to the formation of the pharmacologically interesting sulfoxide 10d. The newly formed pyrazoles deserve additional synthetic interest as starting materials, also due to their nitro and dichloromethyl groups.

All persubstituted pyrazoles tested in this study showed pronounced antimalarial activity against the asexual blood stages of P. falciparum with EC50 values ranging from 200 nM to 4 µM (Table 1). Thus, the antiparasitic activity of persubstituted pyrazoles is about two orders of magnitude lower compared to the antimalarial amodiaquine (EC50 = 6 nM). Also many other antimalarials such as chloroquine, quinine, mefloquine, and artesunate, tested in the SYBR Green or comparable test systems, show EC50 values in the lower nM range [36-39]. Thus, the newly reported compounds are a valuable enrichment from the chemical perspective and have promising potential for further optimization or combination with other compounds.

This work was financially supported by Clausthal University of Technology (D.E.K, V.A.Z) and by the LOEWE Center DRUID (Project B3) within the Hessian Excellence Program (I.B., M.D.).

Conceptualization, V.A.Z. and D.E.K.; Synthesis and spectroscopic identification of the synthesized compounds, V.A.Z. and B.K; Evaluation of the biological activity of the synthesized compounds, K.B., U.B., I.B., M.D., S.J. and A.S.; Writing – original draft, V.A.Z., B.K, U.B. I.B.; Writing – review & editing, D.E.K., U.B. and K.B. All authors have read and agreed to the published version of the manuscript.

© 2022 Zapol’skii et al.; licensee Beilstein-Institut.
This is an open access article licensed under the terms of the Beilstein-Institut Open Access License Agreement (https://www.beilstein-journals.org/bjoc/terms), which is identical to the Creative Commons Attribution 4.0 International License (https://creativecommons.org/licenses/by/4.0). The reuse of material under this license requires that the author(s), source and license are credited. Third-party material in this article could be subject to other licenses (typically indicated in the credit line), and in this case, users are required to obtain permission from the license holder to reuse the material. 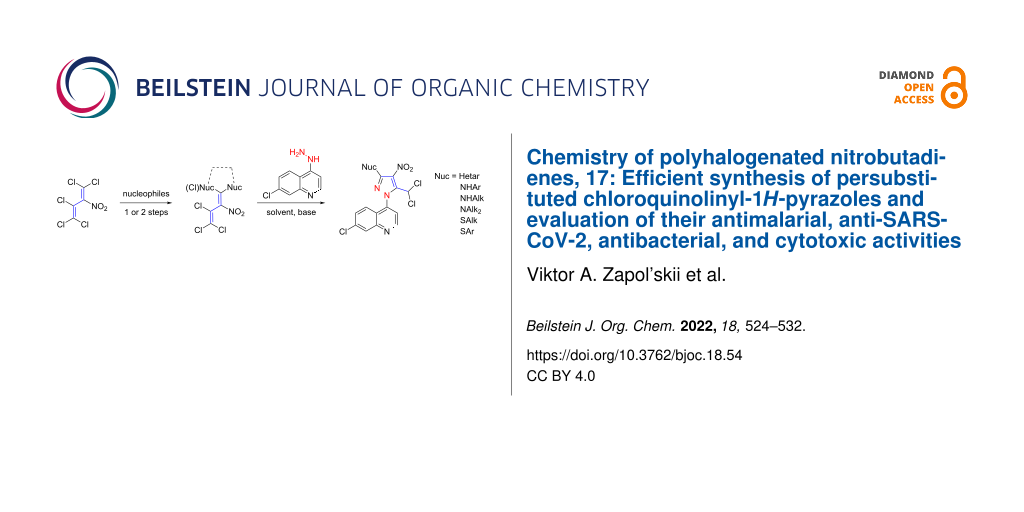