The cathodic reduction of bromodifluoromethyl phenyl sulfide (1) using o-phthalonitrile as a mediator generated the (phenylthio)difluoromethyl radical, which reacted with α-methylstyrene and 1,1-diphenylethylene to provide the corresponding adducts in moderate and high yields, respectively. In contrast, chemical reduction of 1 with SmI2 resulted in much lower product yields. The detailed reaction mechanism was clarified based on the cathodic reduction of 1 in the presence of deuterated acetonitrile, CD3CN.

Organofluorine compounds containing a difluoromethylene group have been of much interest from biological aspects since the difluoromethylene group is isopolar and isosteric with an ether oxygen [1,2]. Particularly, organic molecules bearing a (arylthio)difluoromethyl group (ArSCF2) have potential biological applications such as anti-HIV-1 reverse transcriptase inhibitors and agrochemical applications [3,4]. Reurakul and Pohmakotr et al. carried out the reaction of PhSCF2Br with SmI2 in THF/iPrOH to generate PhSCF2 radicals followed by trapping with various olefins in moderate yields [5]. Prakash et al. also achieved fluoride-induced nucleophilic (phenylthio)difluoromethylation of carbonyl compounds using PhSCF2SiMe3 [6]. Quite recently, Shen et al., developed various nucleophilic, electrophilic, and radical difluoromethylthiolating reagents [1]. However, these methods require various metal and organometallic reagents. On the other hand, electrochemical organic synthesis is a metal-free process and does not require any hazardous reagents and it produces less waste than conventional chemical syntheses. Therefore, electrochemical synthesis is desirable from an aspect of green chemistry [7-10]. In this context, we have developed various electrochemical methodologies for efficient selective fluorination [11,12] and molecular conversion of organofluorine compounds to date [13-18]. We have also achieved the gem-difluorination of sulfides bearing various electron-withdrawing groups at the α-position (Scheme 1) [19-21]. Furthermore, we also succeeded in the electrochemical gem-difluorodesulfurization of dithioacetals and dithiocarbonate (Scheme 2 and Scheme 3) [22,23].

In this work, we have studied the electrochemical generation of (phenylthio)difluoromethyl reactive species from bromodifluoromethyl phenyl sulfide and their synthetic application as well as mechanistic aspects.

Next, we carried out the constant potential cathodic reduction of 1 at a platinum cathode in Bu4NClO4/MeCN. Notably, when 1.3 F/mol were passed, starting compound 1 was consumed completely. As shown in Scheme 4, difluoromethyl phenyl sulfide (2) was mainly formed as well as bis(phenylthio)difluoromethane (3) as a minor product. From these results, one-electron and two-electron reductions of 1 seem to take place simultaneously to generate radical and anionic intermediates.

In order to trap the radical intermediate, the constant potential cathodic reduction of 1 was performed in the presence of various olefins such as α-methylstyrene, cyclohexene, and dihydrofuran. The results are summarized in Table 1.

Regardless of trapping reagents, 1.3–1.4 F/mol of electricity was required to consume the starting material 1. The required electricity was similar to the electrolysis in the absence of the trapping reagent. Only when α-methylstyrene was used as the radical trapping reagent, the expected radical adduct 4 was formed in reasonable yield of ca. 30% (Table 1, run 1). A platinum cathode is more suitable for the formation of adduct 4 compared to a glassy carbon cathode (Table 1, run 2). Dolbier et al. reported that electron-poor perfluoroalkyl radicals such as n-perfluoropropyl radical have high reactivity to electron-rich olefins such as α-methylstyrene and styrene [26]. In fact, our cathodically generated reactive species also reacted with α-methylstyrene. However, electron-rich dihydrofuran did not provide any radical adduct at all (Table 1, run 4). The reason is not clear at present. Thus the obtained results indicate that the cathodically generated reactive species would be the (phenylthio)difluoromethyl radical. In order to increase the yield of adduct 4, the cathodic reduction of 1 was performed in other solvents such as DMF and CH2Cl2 using 20 equiv of α-methylstyrene. However, the yield of 4 did not increase.

As shown in Figure 1b, a typical reversible redox couple (E1/2red = −1.69 V vs. SSCE) of o-phthalonitrile was clearly observed. A significantly enhanced cathodic peak current was observed after addition of compound 1 to the solution containing o-phthalonitrile while the anodic peak current disappeared completely as shown in Figure 1c. The reduction peak potential of 1 is −2.4 V vs. SSCE, which excludes the reduction of 1 at this potential. Therefore, the enhanced cathodic current of o-phthalonitrile clearly suggests that a typical electrocatalytic reduction reaction takes place. Thus, it was found that o-phthalonitrile should work as an electron transfer catalyst, i.e., a redox mediator.

Next, the indirect cathodic reduction of compound 1 was carried out similarly in the presence of α-methylstyrene and the results are summarized in Table 2.

When 0.2 equiv of the mediator were used, the yields of both products 2 and 4 were decreased compared to the direct cathodic reduction (Table 2, run 1). Increasing the amount of the mediator to 0.5 equiv resulted in an increase of the yield of 4 to 35% (Table 2, run 3) while the yield of 2 was decreased significantly. In this case, the required electricity was increased to 1.8 F/mol.

From these results, we anticipate that a one-electron reduction of compound 1 takes place to generate the PhSCF2 radical, which is further reduced affording the PhSCF2 anion when a trapping reagent is absent. The resulting anion seems to undergo elimination of difluorocarbene to generate a phenylthiolate anion which reacts with compound 1 to form product 3 as shown in Scheme 6.

In order to confirm the proposed reaction pathway to product 3, the reaction of bromodifluoromethyl phenyl sulfide (1) with phenylthiolate anion was performed at room temperature. As expected, product 3 was formed in moderate yield of 67% as shown in Scheme 7.

As already mentioned, SmI2 is a well-known one-electron reducing reagent, and has been used to generate PhSCF2 radicals and perfluoroalkyl radicals from PhSCF2Br and perfluoroalkyl halides, respectively. The generated radicals undergo addition to olefins and acetylenes [5,33]. Pohmakotr et al. and Yoshida et al. reported that the reaction of PhSCF2Br and PhCF2Cl with SmI2 generated PhSCF2 and PhCF2 radicals, which were trapped with styrene [5,34,35]. Therefore, we carried out the reaction of compound 1 with SmI2 in the absence and presence of α-methylstyrene, which is more electron-rich compared to styrene. The results are summarized in Table 3.

As shown in Table 3, even when two equivalents of SmI2 were used in the absence of α-methylstyrene, the conversion of compound 1 was low and a large amount of starting material 1 was recovered (Table 3, run 1). In this case, simple reduction product 2 was formed together with trace amounts of product 3. Since HMPA is known to enhance the reducing ability of SmI2 [36], we performed the reaction of compound 1 in THF containing 7.5 equiv HMPA. As expected, the conversion of 1 increased from 34% to 66%, and product 3 was formed in 32% yield (Table 3, run 2). However, the yield of product 2 decreased from 12% to 5%. Then, the reaction of 1 with SmI2 was carried out similarly in the presence of α-methylstyrene (Table 3, run 3). However, the result was almost the same as that in the absence of α-methylstyrene: the yields of products 2 and 3 remained unchanged and the expected adduct 4 was not formed at all although the conversion of compound 1 increased. In both cases (Table 3, runs 2 and 3), unidentified products were formed. Thus, it was found that the chemical reduction of compound 1 with SmI2 was quite different from the electrochemical reduction. However, notably, when THF containing MeOH (10 equiv with regard to compound 1) was used, adduct 4 was formed in 14% yield (Table 3, run 4). In this case, product 3 was not formed.

In order to determine the hydrogen source of the products 2 and 4, indirect cathodic reduction of 1 was carried out in deuterated acetonitrile, CD3CN (Scheme 9).

As shown in Scheme 9, deuterated products 2 and 4 were formed. In the case of product 2, almost complete deuteration was observed, which clearly indicates that product 2 should be formed via a PhSCF2 radical intermediate. Thus, the main hydrogen source for the formation of product 2 was determined to be MeCN. On the other hand, in the case of adduct 4, deuterated and protonated 4 were formed in a similar yield, which suggests that 4 would be formed via both radical and anionic intermediates.

In order to further clarify the reaction mechanism, the indirect cathodic reduction of compound 1 was performed in the presence of α-methylstyrene in MeCN containing cumene (iPrC6H5) and isopropyl alcohol (iPrOH). The former works as a hydrogen radical source while the latter works as both a hydrogen radical and proton source. The results are summarized in Table 4.

aDetermined by 19F NMR; bisolated yield is shown in parentheses.

Isopropanol can serve as both a proton and a hydrogen radical source while cumene serves only as a hydrogen radical source. The indirect cathodic reduction of compound 1 in the presence of cumene decreased the yield of adduct 4 while the use of iPrOH instead of cumene increased the yield markedly. As already mentioned, in the chemical reduction of compound 1 with SmI2, only 10 equiv of MeOH to 1 also enhanced the formation of adduct 4 to some extent (from 0% to 14% yield) as shown in Table 3. Therefore, iPrOH seems to promote the radcal addition rather than reduction although the reason has not been clarified yet.

Moreover, the indirect cathodic reduction of compound 1 at high current density in the presence of α-methylstyrene formed a trace amount of 1,1-difluorocycopropane derivative 5, which is an evidence of the generation of difluorocarbene from 1.

In consideration to these facts, we propose the following reaction mechanism as shown in Scheme 11.

The one-electron reduction of 1 generates the PhSCF2 radical A, which abstracts a hydrogen radical from MeCN to give product 2 (path b). The radical A undergoes further reduction to generate anion B (path a). Elimination of difluorocarbene from anion B forms a phenylthiolate anion, which reacts with the starting material 1 to form product 3. In the presence of radical trapping reagents such as styrene derivatives, radical A reacts with styrenes to form radical intermediate adduct C. The radical C abstracts a hydrogen radical to form products 4 and 6. Alternatively, the radical intermediate C is further reduced to generate anion D followed by protonation to give products 4 and 6.

We have successfully carried out catalytic electrochemical reduction of bromodifluoromethyl phenyl sulfide using o-phthalonitrile as mediator to generate (phenythio)difluoromethyl radicals selectively. The generated radicals were efficiently trapped with electron-rich olefins such as α-methylstyrene and 1,1-diphenylstyrene. The reaction mechanism was also disclosed by using the deuterated solvent CD3CN.

We thank Dr. Seiichiro Higashiya of Tokyo Institute of Technology for measurements of mass spectra and valuable suggestions.

This study was supported by Kakenhi Grants-in-Aid (JP20350071) from the Japan Society of Promotion of Science (JSPS) and a Support for Tokyo Tech Advanced Researchers [STAR] grant funded by the Tokyo Institute of Technology Fund (Tokyo Tech Fund).

© 2022 Iwase et al.; licensee Beilstein-Institut.
This is an open access article licensed under the terms of the Beilstein-Institut Open Access License Agreement (https://www.beilstein-journals.org/bjoc/terms), which is identical to the Creative Commons Attribution 4.0 International License (https://creativecommons.org/licenses/by/4.0). The reuse of material under this license requires that the author(s), source and license are credited. Third-party material in this article could be subject to other licenses (typically indicated in the credit line), and in this case, users are required to obtain permission from the license holder to reuse the material. 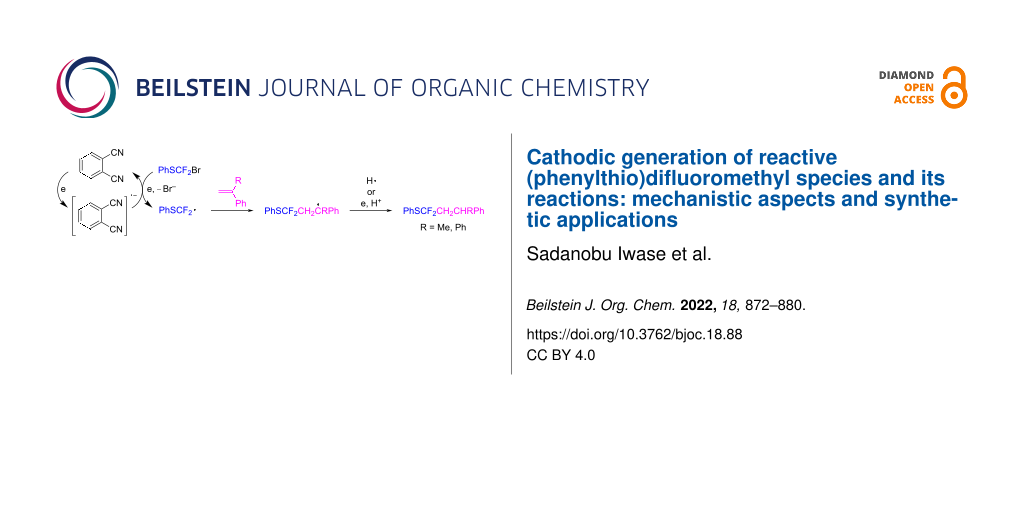