Morita–Baylis–Hillman reaction of 3-formyl-9H-pyrido[3,4-b]indoles and fluorescence studies of the products

β-Carboline is a privileged class of the alkaloid family and is associated with a broad spectrum of biological properties. 3-Formyl-9H-pyrido[3,4-b]indole is a such potent precursor belonging to this family which can be tailored for installing diversity at various positions of β-carboline to generate unique molecular hybrids of biological importance. The present work is a step towards this and assimilates the results related to the exploration of 3-formyl-9H-β-carbolines for the synthesis of β-carboline C-3 substituted MBH adducts followed by evaluation of their fluorescent characteristic. The effect of contact time, solvent system, concentration and substituents was also studied during investigation of fluorescence properties of these derivatives.

Among the polycyclic alkaloids based on indole, the tricyclic structure β-carboline represents a promising class of pyridoindole alkaloids with a variety of biological activities which make them interesting synthetic targets [1-8]. Alkaloids containing the β-carboline nucleus in their molecular architecture are present ubiquitously in nature and a large number of natural products are reported representing this scaffold [9-16]. The key precursor used in the biosynthesis of β-carboline is ʟ-tryptophan which forms the basis of great abundance of β-carboline-containing natural products [17]. A broad spectrum of biological activities is displayed by this pharmacologically rich nucleus which includes antibacterial, antifungal, anticancer, anxiolytic, antimalarial, antiviral, anti-HIV, anti-Alzheimer, and anticonvulsant activities etc. [18-26]. Potent anticancer activities are shown by the majority of β-carboline-containing compounds [27-30]. Figure 1 summarizes some examples of β-carboline-based drugs and bioactive natural products some of which have even been commercialized successfully showing the importance of this nucleus [31-33]. This pharmacological richness and colossal medicinal importance is the reason that the synthesis of β-carboline-containing derivatives has been an exciting area for researchers [34-40].

The Morita–Baylis–Hillman (MBH) reaction is an astonishing C–C bond forming reaction between a carbonyl electrophile and an activated alkene leading to the formation of allylic alcohol; a highly functionalized product [41-44]. The chemistry of the MBH reaction is decorated with several unique features viz. atom economy, complexity generation and generation of a chiral center from a pro-chiral electrophile. The chemistry of the MBH reaction has gained considerable attention from the past two decades as these MBH adducts are highly functionalized and offer various points of diversity. Due to these amazing features, these MBH adducts act as starting material on which various organic transformations can be performed leading to the synthesis of various natural and synthetic products. MBH adducts itself display diverse biological activities like antifungal, antibacterial, herbicide, antiparasitic and antitumor as reviewed by Lima-Junior et al. (2012) [45].

It was envisaged that in comparison to the traditional methods like Pictet–Spengler (P-S) or Bischler–Napieralski (B-N) cyclisation, introduction of a formyl group at C-1 or C-3 position of the β-carboline frameworks may provide a new route for generating unlimited diversity at C-1 as well as at the C-3 position of β-carbolines. As depicted in Figure 2, 1-formyl-β-carbolines and 3-formyl-β-carbolines are decorated with different sites for diversification which make these synthons a promising template for the construction of β-carboline-fused frameworks via C-1 N-9, C-1 N-2 and C-3 N-2 cyclisation. Similarly, β-carboline-substituted molecular frameworks can be generated at C-3 position.

Therefore, we herein report the synthesis of C-3-substituted pyrido[3,4-b]indole MBH adducts from substituted 3-formyl-9H-β-carbolines by the application of the MBH reaction followed by evaluation of their fluorescence properties.

The current study began with the synthesis of substituted 3-formyl-9H-β-carbolines (6a–e), which was accomplished by modifying the previously disclosed process as presented in Scheme 1 [46,47,57]. Pictet–Spengler (P-S) condensation of ʟ-tryptophan (1) with different aldehydes (a–e) in dry DCM at room temperature yielded tetrahydro-β-carboline derivatives 2a–e, which were then oxidized with KMnO4 in anhydrous DMF for 45 minutes to yield β-carboline derivatives 3a–e. It was encouraging to observe that the P-S condensation with ʟ-tryptophan (1) was much faster than with the tryptophan ester, taking only 45 minutes to complete. Interestingly, KMnO4 oxidation was selective, with no decarboxylation seen. Within 15 minutes, further treatment of 3a–e with methyl iodide in the presence of K2CO3 provided the corresponding methyl ester 4a–e in high yield (83–87%) and ester functionality reduction with LiAlH4 in dry THF yielded the alcohols 5a–e in excellent yield (90–98%). The required 3-formyl-9H-β-carbolines 6a–e were obtained in 73–88% yield by oxidizing the alcohol derivatives 5a–e with MnO2 in dry DCM. The present methodology is decorated with several advantages like scalability and selectivity. Additionally, no column chromatographic purification was required at any stage and each step was high yielding.

After the synthesis of starting materials, the Morita–Baylis–Hillman reaction was explored for C-3 functionalization of the β-carboline framework. Accordingly, 3-formyl-9H-β-carbolines 6a–e were subjected to MBH reaction with acrylonitrile A and various acrylates B–E under neat conditions in the presence of DABCO as depicted in Scheme 2. All the products were furnished smoothly in 27–72% yield. During this study, it was observed that the MBH reaction of 6b with acrylonitrile A resulted in the formation of product 8bA which evidenced that 6b underwent Morita–Baylis–Hillman reaction at the electrophilic carbonyl center as well as Michael addition reaction at the nucleophilic nitrogen center (N-9). Similar results were obtained when 6e was subjected to MBH reaction with acrylonitrile A and methylacrylate B and products 8eA and 8eB were generated as outlined in Scheme 2.

The effect of a substituent at N-9 position on the reactivity of 3-formyl-9H-pyrido[3,4-b]indole was also investigated during this study. For this purpose, the N-ethyl derivative 9e of 6e was prepared and subjected to MBH reaction with acrylonitrile A and methylacrylate B under neat conditions to generate the corresponding MBH adducts (10eA and 10eB) (Scheme 3). Interestingly, 9e showed more affinity towards this C–C bond forming transformation than 6e. It is noteworthy here that all the products were purified by column chromatography.

A small library of C-3-substituted pyrido[3,4-b]indole derivatives was designed and synthesized which is presented in Figure 4. All the products were characterized using NMR, FTIR and mass spectrometry.

In conclusion, we have successfully explored 3-formyl-1-aryl-9H-pyrido[3,4-b]indole derivatives for the C-3 functionalization by application of the MBH reaction to generate C-3-substituted β-carboline MBH adducts. It was revealed from spectroscopic analysis that few derivatives underwent MBH reaction as well as Michael addition reaction to form type 8 compounds. Additionally, the scope of the reaction was further extended and the effect of substituents at the N-9 position on the reactivity of 3-formyl-1-aryl-9H-pyrido[3,4-b]indoles was also investigated. Furthermore, fluorescence properties of these β-carboline conjugates were also studied and they were found to exhibit excellent fluorescence characteristics. Different parameters like contact time, concentration, solvent effects and substituent effects were examined for obtaining the optimal results. It was observed that the MBH derivatives exhibited excellent fluorescence characteristics at a concentration of 5 × 10−6 M in chloroform solvent after 15 minutes of sample preparation. Derivatives 7cB and 7cE bearing an o-bromophenyl substituent at R1 position emerged as two most fluorescent compounds in the present series. Furthermore, products of type 7 (Morita–Baylis–Hilman adducts) were more fluorescent than products 8 (Morita–Baylis–Hilman + Michael adducts). Antimicrobial evaluation of the title compounds is underway and will be reported in due course.

Supporting information contains detailed experimental procedure for the synthesis of compounds 6–9 and 10 followed by detailed characterization data and copies of 1H NMR and 13C NMR spectra of newly synthesized compounds 6–10.

We acknowledge the Indian Institute of Technology Ropar, SAIF Division and Central Instrumental Facility, GJ University of Science and Technology, Hisar is gratefully acknowledged for recording spectroscopic data reported in this paper.

© 2022 Devi and Singh; licensee Beilstein-Institut.
This is an open access article licensed under the terms of the Beilstein-Institut Open Access License Agreement (https://www.beilstein-journals.org/bjoc/terms), which is identical to the Creative Commons Attribution 4.0 International License (https://creativecommons.org/licenses/by/4.0). The reuse of material under this license requires that the author(s), source and license are credited. Third-party material in this article could be subject to other licenses (typically indicated in the credit line), and in this case, users are required to obtain permission from the license holder to reuse the material. 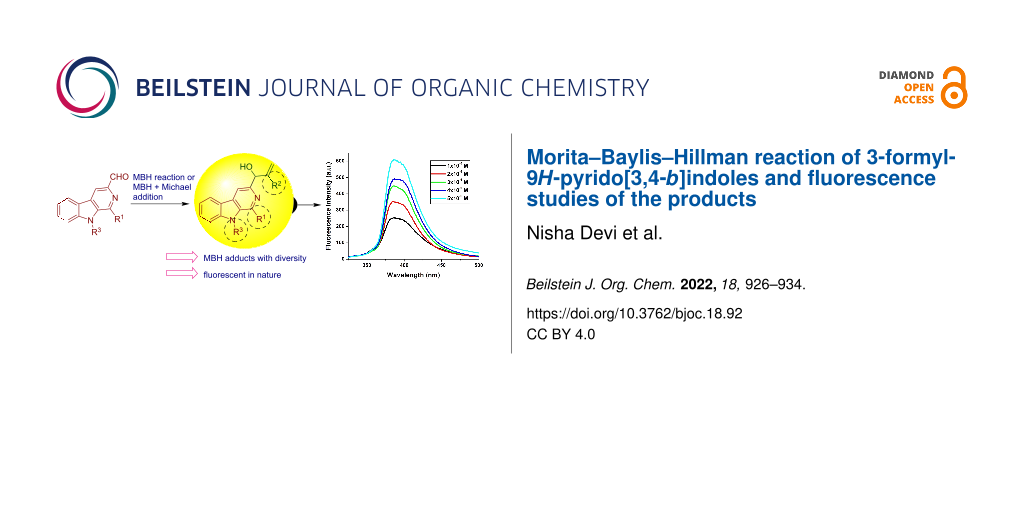