All articles from this author
Xiaoming Zhao


All articles from this author
Sujith Chacko


All articles from this author
Fang Wang


All articles from this author
Habiba Vaghoo


All articles from this author
George A. Olah

The 1,4-addition of a monofluoromethyl nucleophile to a variety of α,β-unsaturated compounds has been achieved under mild conditions using either phosphines or potassium carbonate at room temperature. α-Substituted fluoro(phenylsulfonyl)methane easily undergoes Michael addition to α,β-unsaturated ketones, esters, nitriles, sulfones, as well as propynoates at room temperature to yield the corresponding adducts in moderate to excellent yields.

Compounds with a monofluoromethyl moiety are of great importance with regards to isostere-based drug design [1-4]. Consequently, synthesis of new functionalized α-monofluorine-substituted active methylene derivatives has attracted considerable attention particularly in the field of medicinal chemistry [5,6]. One of the major interests in our group has focused on developing new fluorination reagents or fluorinated building blocks for preparation of fluorine-substituted compounds [7-13]. As part of our ongoing effort to extend the applications of fluorine-containing (phenylsulfonyl)methane derivatives, we envisaged that fluoro(phenylsulfonyl)methane, α-substituted by nitro, cyano, ester, or acetyl would be useful for the synthesis of functionalized monofluoromethylated compounds, which would undergo various transformations. New synthetic methods for the synthesis of α-substituted fluoro(phenylsulfonyl)methane derivatives under mild reaction conditions, using convenient starting materials, are still desirable.

Fluorinated carbanions are in principle "hard" nucleophiles that readily undergo 1,2-addition with Michael type acceptors instead of 1,4-addition [14-16]. Different strategies have been employed to achieve 1,4-addition, which is still percieved to be a challenge. For instance, Yamamoto [17] and Röschenthaler [18,19] have made use of bulky aluminum Lewis acids to protect the carbonyl of Michael acceptors and thus sucessfully transferred the trifluoromethyl anion generated from the "Ruppert-Prakash reagent" (TMS-CF3) in a 1,4-manner rather than the favored 1,2-addition. Portella et al. [20] have shown that 1,4-addition of difluoroenoxysilanes to enones can be used to introduce difluoromethylene moiety while Kumadaki and coworkers [21,22] have used bromodifluoroacetate with a copper catalyst to introduce the CF2 functionality. There also exist few reports on the 1,4-addition of monofluoromethylene moieties to α,β-unsaturated compounds [23,24]. Takeuchi and coworkers [25] have shown that α-fluoronitroalkanes can undergo 1,4-addition to methyl vinyl ketone and acrylonitrile to afford the dialkylated products.

Our strategy for the preparation of monofluoro methanes was to use commercially available Selectfluor® [35] as the electrophilic fluorine source. The monofluorination of (nitromethylsulfonyl)benzene with Selectfluor® under the improved conditions [36] [treatment of (nitromethylsulfonyl)benzene (6.75 mmol) with NaH (6.75 mmol) in THF (25 mL) followed by Selectfluor® (6.75 mmol) in 15 mL of DMF at 0 °C] gave [fluoro(nitro)methylsulfonyl]benzene 3a in 62% isolated yield (Table 1, entry 1). A doublet was observed at δ −142.16 ppm in the 19F NMR spectrum of 3a, which matched our previously reported result [11]. Other fluoro(phenylsulfonyl)methane derivatives were synthesized in 45–61% yields under similar conditions (Table 1, entries 2–5).

Alkylation of 3a–d, 3f is reported to be a challenge because the combined carbanion-stabilizing abilities of the two strong electron-withdrawing groups are not sufficient to overcome the well-known carbanion destabilization by the adjacent fluorine [25]. With this in mind, we first opted to use phosphines as nucleophilic catalysts. Concerning applications of 3a–d, and 3f in constructing the carbon-carbon bond, a reaction of [fluoro(nitro)methylsulfonyl]benzene with methyl vinyl ketone was first tested in the presence of PPh3 (50 mol%) in THF at room temperature under argon. Interestingly, 5-fluoro-5-nitro-5-(phenylsulfonyl)pentan-2-one (5a) was obtained in 93% yield as the sole product, which was characterized by 1H, 13C, 19F NMR, and HRMS. In the 19F NMR spectrum of 5a, two doublets at δ −125.94 ppm were observed. As it is known, fluoro substitution can cause problems in transformations, since fluoride can also act as a leaving group. Notably, fluorine-free products were not detected in the course of above-mentioned Michael reactions, under the reaction conditions.

We then screened various electronically and sterically different phosphines such as PPh3, Bu3P, (iPr)3P and PMe3. Initial experiments revealed that the catalytic activity of phosphines and phosphine loading (varying from 20% to 50%) efficiently promoted the Michael reaction. With 50 mol% catalyst loading, the reaction rates were approximately 2- to 3-fold faster than the corresponding 20 mol% PPh3 catalyzed reactions. A dramatic increase in the efficiency of the reaction came from the usage of less bulkier phosphine, PMe3 (20 mol%), which led to the best result (Table 2, entry 1).

Having established optimal conditions, we then investigated the scope of various substrates in the reaction (Table 2). Methyl vinyl ketone reacted with 3a, 3b, 3c, or 3f to furnish the corresponding products in good to excellent yields, respectively, except in the case of 1-fluoro-1-(phenylsulfonyl)propane-2-one (3d) (Table 2, entries 1–4). Compound 3d gave complex results due to the reactions of the two types of active acidic α-Hs adjacent to the carbonyl group in the molecule.

When ethyl acrylate was subjected to similar reaction conditions, the yields of the products were 60–88% after prolonged reaction time. Compared to methyl vinyl ketone, the reaction rates were slow due to the somewhat lower reactivity of ethyl acrylate (Table 2, entries 5–8). All products obtained were characterised by 19F, 1H, 13C NMR spectra, as well as HRMS. In addition, base-sensitive functional groups such as cyano, nitro, and ester were well tolerated during the course of the reaction. The failure of (E)-pent-3-en-2-one to undergo the Michael reaction under these conditions demonstrates that the reaction is not tolerant of substituents at the terminal position of the double bond due to steric effects.

On the basis of the above mentioned results, a proposed mechanism for the formation of 5a–h is outlined in Scheme 1. Trialkylphosphine catalysed Morita-Baylis-Hillman reaction is well studied by a number of groups [37-39]. Addition of PMe3 to alkene 4 generates the dipolar intermediate. The latter abstracts a proton from the α-fluoro-substituted methylene derivative 3, followed by an intermolecular SN2 reaction to furnish the desired product 5 and the release of PMe3 (Scheme 1). The mechanism supports the fact that the less steric hindered catalyst PMe3 is more efficient than PPh3, Bu3P or (iPr)3P.

In addition, the presence of electron withdrawing groups such as the phenylsulfonyl group can be exploited to generate a carbanion that can act as a "soft" nucleophile [40,41]. The phenylsulfonyl group delocalises the electron density on the fluorinated carbanion center, which makes the resulting nucleophile softer and more suitable for 1,4-addition with Michael acceptors. Hence, we explored the possibility of a base induced Michael addition reaction. Among the various bases and solvent combinations that we explored, the K2CO3/DMF system was found to be very efficient both in terms of conversions as well as reaction times.

The reactions were carried out at room temperature and the completion observed within 2 h. The reaction was found to be versatile for various α,β-unsaturated compounds such as ketones, esters, nitriles and sulfones (Table 3). In case of α,β-unsaturated aldehydes the reaction was found to be not clean and too many fluorine peaks appeared in the 19F NMR even when the reaction was carried out at low temperatures. On the other hand, α,β-unsaturated nitriles underwent a second Michael addition of the product 6h. Both fluoro(bisphenylsulfonyl)methane and fluoronitro(phenylsulfonyl)methane were added to propynoates under similar conditions. As expected, a mixture of both cis and trans products were obtained as shown in Table 3 (entries 10–11). Interestingly, in the case of fluoronitro(phenylsulfonyl)methane only the trans isomer 6l was obtained in an appreciable amount while the cis product was observed only in traces.

During our study, we observed that the steric factor affects the addition of the pronucleophile to the Michael acceptor. Substitution at the α-position of the Michael acceptor affects the reactivity of the nucleophile generated by the K2CO3/DMF system. The reaction of fluoro(bisphenylsulfonyl)methane with methyl crotonate was found to give only 50% conversion based on 19F NMR after 36 h and methyl cinnamate did not react at all at room temperature using the K2CO3/DMF system. These observations are consistent with what was observed in the phosphine case discussed earlier. Attempted reductive desulfonylation on compound 6d using Mg/CH3OH [11] was not selective as simultaneous reduction of the carbonyl group was also observed.

Support of our work by the Loker Hydrocarbon Research Institute is gratefully acknowledged.

© 2008 Prakash et al; licensee Beilstein-Institut.
This is an Open Access article under the terms of the Creative Commons Attribution License (http://creativecommons.org/licenses/by/2.0), which permits unrestricted use, distribution, and reproduction in any medium, provided the original work is properly cited.
The license is subject to the Beilstein Journal of Organic Chemistry terms and conditions: (http://www.beilstein-journals.org/bjoc) 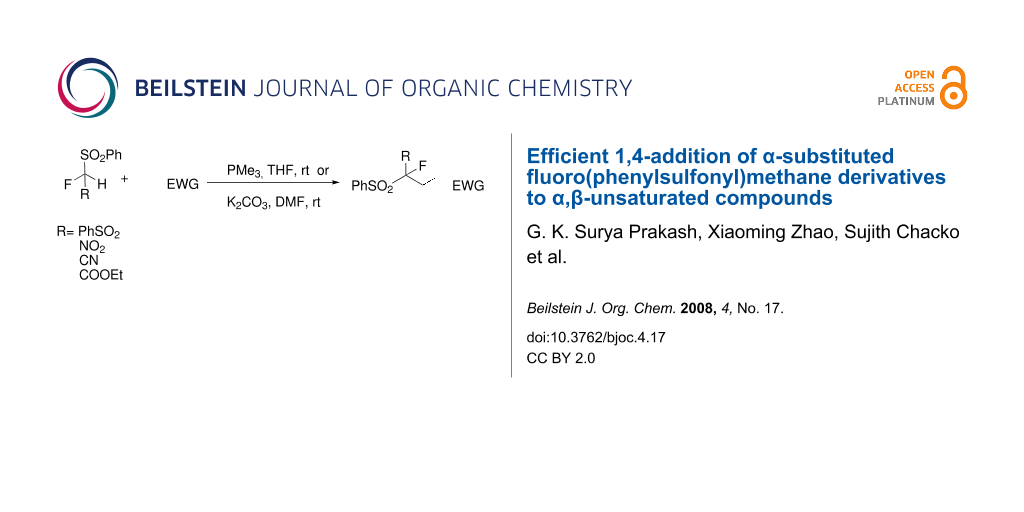