All articles from this author
Ping Hu


All articles from this author
Yuhua Long


All articles from this author
Yujuan Wu


All articles from this author
Heping Zeng


All articles from this author
Hui Wang


All articles from this author
Xiongjun Zuo

Iridium-catalyzed asymmetric ring-opening reactions of oxabicyclic alkenes with various aliphatic and aromatic secondary amines are reported for the first time. The reaction gave the corresponding trans-1,2-dihydronaphthalenol derivatives in good yields with moderate enantioselectivities in the presence of 2.5 mol % [Ir(COD)Cl]2 and 5 mol % bisphosphine ligand (S)-p-Tol-BINAP. The trans-configuration of 3f was confirmed by X-ray crystallography.

Substituted dihydronaphthalenes are important molecules with different biological activities [1-5]. Therefore, the synthesis of these molecules has been an attractive research topic in recent years. Among the many reported methods for the preparation of the dihydronaphthalene skeleton, transition metal-catalyzed asymmetric ring-opening (ARO) of oxabicyclic alkenes is one of the most attractive because this reaction could potentially create two chiral centers in a single step.

Pioneering work in this field was first described by Caple et al. [6] and the group of Lautens [7-9]. In the past decades, the group of Lautens and others reported rhodium-catalyzed asymmetric ring-opening of oxabenzonorbornadiene with a wide range of nucleophiles including thiols [10], phenols [11], organoboronic acids [12,13], dialkylzincs [14,15], carboxylates [16], sulfur nucleophiles [17], and various amines [18,19].

In addition to rhodium catalysts, other transition metal catalysts may be used for asymmetric ring-opening reactions of oxabicyclic alkenes. These include complexes of copper [20-25], palladium [14,15,26-31], iron [32], and nickel [33-36]. Recently, we reported for the first time iridium-catalyzed asymmetric ring-opening of N-Boc-azabenzonorbornadiene with a wide range of secondary amines [37].

In this article, we will report ARO reactions of oxabicyclic alkenes with aliphatic and aromatic secondary amine nucleophiles using iridium-complex catalysts, which provide a fast and efficient access to chiral molecules with the dihydronaphthalene skeleton.

The ARO reaction involves many components of the chemical agents; we first attempted to optimize the ligand to iridium catalyst system (Scheme 1). In our initial experiments, we chose an achiral 1,1′-bis(diphenylphosphino)ferrocene (DPPF) ligand to validate the catalytic activity of the iridium complex. The product 2a was obtained in high yield (80%) in the presence of 2.5 mol % [Ir(COD)Cl]2 and 5 mol % DPPF in THF after 5 h.

Encouraged by this result, we then ran the asymmetric version of the same reaction using different kinds of chiral bisphosphine ligands as shown in Scheme 1. We first examined ferrocenyl bisphosphine ligand, (R,S)-PPF-PtBu2, which was identified as the ligand giving the best reactivity and excellent enantioselectivity in Rh-catalyzed system [11-15]. Unfortunately, the desired ring-opened product 2a was obtained only in low yield (47%) with reasonable enantioselectivity (51% ee) in the iridium-catalyzed system. This suggested that (R,S)-PPF-PtBu2 was not an ideal ligand in iridium-catalyzed reactions, which prompted us to screen other ligands. Among the several chiral ligands we had tested, (S)-BINAP and (S)-p-Tol-BINAP were found to give better yields and reasonable enantioselectivities. Moreover, in the case of (S)-p-Tol-BINAP, the enantioselectivity is slightly higher than for (S)-BINAP (52% ee vs 35% ee); therefore, we decided to use (S)-p-Tol-BINAP as the ligand for this ring-opening reaction.

Based on the above findings, we decided to use the following reaction condition as a standard to run the ARO reactions, which consisted of 2.5 mol % [Ir(COD)Cl]2, 5 mol % (S)-p-Tol-BINAP, and 3.0 equiv of substituted N-alkylaniline in THF at 80 °C. The results of the ARO of oxabenzonorbornadiene 1a are shown in Table 2.

The results demonstrated that the size of the alkyl group on nitrogen in the nucleophile significantly influenced the reactivity and enantioselectivity. For instance, in the reaction of 1a with N-methylaniline, which has a small group on N-atom, the ring-opening product 2a was obtained in 87% yield and 52% ee (Table 2, entry 1), whereas in the reaction of 1a with N-ethylaniline, which has a larger group on N-atom, the yield decreased to 75%, but the enantioselectivity was slightly increased (Table 2, entry 2). When N-allylaniline was used as a nucleophile, we obtained the product 2c in 48% yield with 74% ee (Table 2, entry 3). The reaction using N-cyclohexylaniline failed to give any ring-opened product because of the steric hindrance of the bulky group (Table 2, entry 4).

To evaluate the scope of the reaction, we also examined various aliphatic secondary amines under optimized reaction conditions, and the results are summarized in Table 3. In most cases, aliphatic secondary amines reacted smoothly with 1a to give the corresponding ring-opened products (2i–l) in high yields (up to 90%) with enantioselectivity ranging between 49% ee and 65% ee (Table 3, entries 5–8). We also found that the halide ions might play an important role in transition metal-catalyzed ARO reactions, in which the reactivity and enantioselectivity could be significantly improved by choosing a suitable halide ion. It was found that the reaction yields and enantioselectivities increased in the order of F<Cl<Br<I (Table 3, entries 2–5). But under the optimized reaction conditions, only a low yield (16%) was obtained without halide ion additives (Table 3, entry 1). Therefore, simply changing the halide ligand on the iridium catalyst from chloride to iodide or bromide leads to improvements in the reactivity and enantioselectivity. On the other hand, the difference in enantioselectivity between the fluoro and the iodo complexes is particularly striking with piperidine as the nucleophile. With the Ir–F catalyst, 2i is formed in only 32% yield and 40% ee. Changing to the Ir–I complex gives 2i in 90% yield and 49% ee (Table 3, entries 2 and 5).

Having examined a wide range of secondary amines, it was found that the sterically hindered nucleophiles enhanced the enantioselectivities (up to 89% ee). Inspired by this observation, we then examined more sterically hindered substrate 1b or 1c in the presence of 2.5 mol % [Ir(COD)Cl]2, 5 mol % (S)-p-Tol-BINAP, and 3.0 equiv of secondary amine nucleophiles in THF, at reflux. The results are summarized in Table 4 and Table 5.

The reactions of substrate 1b, which contained methoxy groups on the 5- and 8-positions, with various secondary amines provided ring-opened products 3a–j in yields from 65% to 83% and enantioselectivities from 41% to 89%. We further found that the substituent groups on the substrate did not apparently influence the yields, whereas the ee values increased, in some cases, to as high as 89% ee (Table 4, entry 6).

aConditions: [Ir(COD)Cl]2 (2.5 mol %) and ligand (5.0 mol %) were dissolved in THF and stirred for 10–20 min. Then NH4I was added and the mixture stirred for another 10–20 min. The substrate 1c was added and the mixture heated to reflux. The nucleophiles were added on the first sign of reflux. bIsolated yields after silica gel column chromatography. cDetermined by HPLC with a Chiralcel AD column or AD column.

The absolute configuration of ring-opened product 3f was demonstrated by X-ray crystallography. The single crystal was obtained by evaporation of the solvent from its solution in dichloromethane and petroleum ether. Its configuration was assigned as (1S,2S), and the hydroxyl group and 4-bromo-N-methylaniline group are in a trans relationship (Figure 1).

Based on our studies in this article, the reaction mechanism is proposed as shown in Scheme 2. The chiral dimeric iridium complex A is first formed. The dimer A is cleaved by solvation (THF) to become monomer B. The oxygen atom and the double bond of oxabenzonorbornadiene 1a are then reversibly coordinated to the iridium center of the catalyst to give the intermediate C. Oxidative insertion of C in to the C–O bond forms D. Then, attack of the secondary amine nucleophile along with configurational inversion is proposed to occur in an SN2′ displacement of the iridium catalyst. The trans-1,2-dihydronaphthalenol product 2 is subsequently released and the iridium monomer B is regenerated.

In summary, we have explored the iridium-catalyzed ARO reaction of oxabicyclic alkenes with N-alkylated anilines or N-substituted piperazine nucleophiles; the reactions gave the desired products in moderate to good yields with good enantioselectivities. The iridium-catalyzed ARO reactions described in this article featured lower cost compared with rhodium-catalyzed ARO reactions, which provided potential applications in asymmetric synthesis of chiral building blocks. The 1,2-trans-configuration of the product was confirmed by X-ray crystallography. The search for an optimized ligand aiming to enhance enantioselectivity and the extension of this reaction to other types of substrates and nucleophiles are currently under investigation in our labs.

General procedure (I) for the asymmetric ring-opening reactions of oxabenzonorbornadiene 1a with substituted N-alkylaniline: A 5.0 mL round-bottom flask fitted with a reflux condenser was flame-dried under a stream of nitrogen and cooled to room temperature. [Ir(COD)Cl]2 (5.8 mg, 2.5 mol %) and (S)-p-Tol-BINAP (10.7 mg, 5 mol %) were simultaneously added, followed by an addition of anhydrous tetrahydrofuran (2.0 mL). After they were stirred for about 10 min, oxabenzonorbornadiene 1a (50.0 mg, 0.347 mmol) was added and the resulting mixture was heated to reflux. On the first sign of reflux, nucleophile (3.0 equiv to 1a) was added. The temperature was continuously increased to 80 °C until the reaction was complete as determined by thin layer chromatography. The reaction mixture was then concentrated in vacuo and purified by column chromatography (silica gel: 200–300 mesh) to give the target product.

See Supporting Information for details of the syntheses of the new compounds 2b-l, 3a-j, and 4a-d.

Experimental procedures and full characterization data for all the new compounds including optical rotations, IR, 1H NMR and 13C NMR, MS and elemental analysis are provided in the Supporting Information. In addition, X-ray structure data for compound 3f are given.

© 2009 Yang et al; licensee Beilstein-Institut.
This is an Open Access article under the terms of the Creative Commons Attribution License (http://creativecommons.org/licenses/by/2.0), which permits unrestricted use, distribution, and reproduction in any medium, provided the original work is properly cited.
The license is subject to the Beilstein Journal of Organic Chemistry terms and conditions: (http://www.beilstein-journals.org/bjoc) 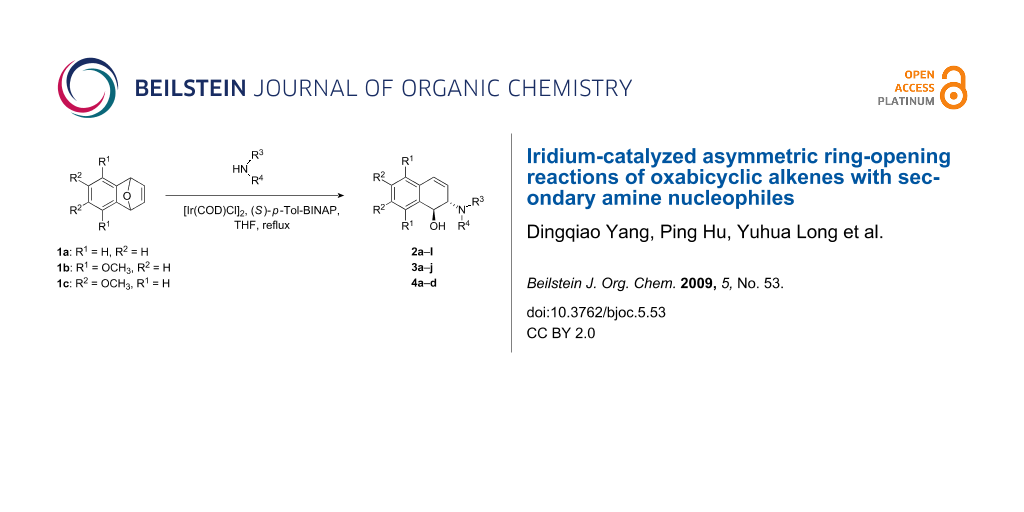