All articles from this author
Graham Sandford


All articles from this author
Dmitrii S. Yufit


All articles from this author
Judith A. K. Howard


All articles from this author
Jonathan Fray


All articles from this author
Bhairavi Patel

Organic systems which bear fluorine atoms are used in an ever widening range of applications in the life sciences. Many commercially significant pharmaceutical and agrochemical products [1-3] owe their biological activity to the presence of fluorinated groups within their structure. Since carbon–fluorine bonds are rare in naturally occurring organic molecules [4], an efficient, selective and economically viable methodology for the synthesis of fluoroorganic derivatives is required to exploit fully the use of fluorinated systems in life science applications. In general, there are two complimentary approaches to the synthesis of fluoroorganic products [5,6], which involve either carbon–fluorine bond formation, requiring functional group interconversion utilising an appropriate nucleophilic or electrophilic fluorinating agent [6], or syntheses based on the reactions of appropriate fluorine containing building blocks [7]. Of course, whichever methodology is used for the synthesis of a specific fluorinated organic molecule, a carbon–fluorine bond must be formed at some stage of the synthetic process, and various fluorinating agents have been developed over many years in attempts to meet synthetic requirements, with varying degrees of success [5].

In an on-going research programme at Durham, aimed at developing widely applicable an effective, selective, direct fluorination methodology, we have been exploring the use of elemental fluorine, a previously underused reagent in organic chemistry, for the synthesis of fluoroorganic systems [8-10]. Methodologies for the preparation of, for example, a range of fluorinated aliphatic [11], carbonyl [12-14], aromatic [15] and heterocyclic [16,17] systems have been established and scaled-up by our industrial collaborators for use in the synthesis of commercially important pharmaceutical intermediates [18]. As part of our studies, aimed at further control of the direct fluorination procedures for larger scale manufacturing, we developed continuous flow microreactor systems that enabled gas/liquid fluorination reactions between fluorine and various substrates to occur in very efficient processes [19-21].

Fluoro-carbonyl derivatives can, in principle, be utilised as building blocks for the preparation of more complex systems such as fluorinated terpenoids, steroids and a range of heterocyclic systems, upon appropriate synthetic elaboration [7], and, consequently, there is much interest in the development of a synthetic methodology for the preparation of such useful fluorinated intermediates. It has been established that, in both batch and continuous flow processes, 1,3-dicarbonyl derivatives are not equally reactive towards fluorine gas [12] and that the ease of selective direct fluorination depends on the nature and proximity of other functional groups. Substrates that have a high initial equilibrium enol concentration in the reaction media that are used for fluorination reactions, such as formic acid or acetonitrile, and/or rapidly convert from the keto to the enol form, will react rapidly and selectively with fluorine to give monofluorinated products in high yield. Conversely, substrates that have low enol concentrations at equilibrium and/or slow keto-enol exchange rates give low yields of the desired monofluorinated dicarbonyl products [12]. Indeed, for carbonyl systems with low enol equilibrium contents and/or low keto-enol exchange rates, direct fluorination must be carried out in conditions that enhance enol formation by base catalysis, by metal catalysis or by fluorination of appropriate pre-formed enol derivatives, such as trimethylsilyl enols or enol acetate derivatives [13,14].

Dicarbonyl systems are, of course, widely used for the construction of heterocyclic ring systems such a pyrimidine, pyridazine and pyrazole derivatives [22,23]. Of relevance to this paper, pyrazole and its derivatives constitute an important class of compounds, which exhibit various biological and pharmaceutical activities ranging from antitumor to anti-inflammatory, antipsychotic, antimicrobial, antiviral and antifungal activities. Pyrazoles are also useful intermediates for many industrial products and it is, therefore, not surprising that many synthetic methods have been developed for the preparation of such heterocyclic systems, for example, through 1,3-dipolar cyclo-additions of diazo compounds and the direct condensation of 1,3-diketones and hydrazines [23].

However, the synthetic methodology for the preparation of the corresponding fluoropyrazole derivatives has not been developed to any great extent despite the potential use of such systems in life science applications. Recently, we explored direct fluorination of various pyrazole substrates using elemental fluorine and, in many cases, obtained low yields of the desired fluoropyrazole products due to significant tar formation [24], while the corresponding fluorination of a limited number of pyrazole systems by SelectfluorTM has been described by other researchers [25]. Various building block strategies that yield fluoropyrazole derivatives from, for example, reactions of appropriate fluorodicarbonyl [26] and fluorocyano-ketones [27], have also been reported.

Consequently, we aimed to develop an effective, selective continuous flow methodology for the efficient synthesis of fluoropyrazole systems and, in this paper, we demonstrate that fluorination of diketones to corresponding fluorodiketones, followed by sequential cyclization to the appropriate fluoropyrazoles upon reaction with a hydrazine derivative, can be accomplished in a single, two-step, telescoped, gas/liquid–liquid/liquid continuous flow process. No examples of gas/liquid–liquid/liquid processes involving direct fluorination as the first stage of a continuous flow procedure have been reported previously.

After some development work, a continuous flow reactor for sequential gas/liquid–liquid/liquid synthesis of fluoropyrazoles from fluorine, hydrazine and diketone starting materials was constructed from nickel metal and narrow bore PTFE tubing as described previously [28,29] (Figure 1).

Briefly, fluorine gas, diluted to 10% v/v solution in nitrogen was added via a mass flow controller to the microchannel through Input A, the diketone substrate dissolved in acetonitrile was added by a syringe pump into the microchannel via Input B and was made to react with fluorine while both these starting materials passed down the reactor channel in a ‘pipe flow’ regime, as observed in previous direct fluorination reactions using this reactor design. The hydrazine solution was added by a syringe pump, via a T-piece at Input C, into the liquid flow, which was carried along the flow reaction channel by the pressure of the accompanying nitrogen gas. The crude reaction mixture was then passed into a vessel containing water to quench the reaction and neutralise any excess HF. Work-up by extraction of the crude reaction mixture with dichloromethane, drying and evaporation of the organic solvent gave a crude product which was further purified by column chromatography or recrystallisation if required.

In our initial exploratory reactions, pentane-2,4-dione (1a) was used as the substrate, because this system has a high initial enol content at equilibrium and rapidly enolises in acetonitrile solution [12]. By varying the flow rate of fluorine gas we were able to achieve reaction conditions that would convert all of the diketone substrate to a fluorodiketone in the first stage of the continuous process. Subsequent separation of fluoropyrazole (4a) from the corresponding non-fluorinated pyrazole, formed by the coupling of not reacted pentane-2,4-dione and hydrazine, was difficult to achieve. Any remaining difluorinated diketone formed by excess fluorination of the substrate was not involved in the second cyclization process and remained in aqueous solution in the collection vessel.

In initial experiments, 1 mmol of the pentane-2,4-dione (1a) was diluted in 4 mL of acetonitrile, and 1.2 mmol of hydrazine hydrate (3a) was also dissolved in 4 mL of solvent (either acetonitrile, ethanol or water). Both were added concurrently to the flow reactor at the rate of 2 mL/min into Inputs B and C, respectively, using accurate syringe pumps. Excess 10% F2/N2 gas mixture was passed into the flow channel at a rate of 18 mL/min to achieve full conversion of pentane-2,4-dione to the corresponding 3-fluoropentane-2,4-dione, and subsequent formation of the fluoropyrazole product 4a occurred with no non-fluorinated pyrazole by-product observed. Early investigations showed that some of the 3-fluoropentane-2,4-dione remained unchanged when only 1.2 mmol of the hydrazine was used and, therefore, in subsequent reactions excess hydrazine (1.5 mmol) was added to ensure complete conversion of the 3-fluoropentane-2,4-dione to the 4-fluoropyrazole 4a (Table 1).

In all reactions, acetonitrile was used as the solvent for the fluorination stage as this reaction medium has been found to be very effective for direct fluorination reactions of dicarbonyl systems [12]. The hydrazine was added to the continuous flow process dissolved in either acetonitrile, water or ethanol depending on the solubility of the hydrazine derivative. Water and ethanol are miscible with acetonitrile, thus enabling the cyclisation process to occur by efficient mixing of the two flow streams within the reactor channel.

Similarly, fluoropyrazole derivatives 4b and 4c were prepared by reaction of 1a with fluorine and methyl hydrazine 3b and phenyl hydrazine 3c, respectively, and these results are included in Table 1.

With the conditions for gas/liquid–liquid/liquid processes established from reactions involving pentane-2,4-dione (1a), several other fluoropyrazole systems 4d–h were synthesised from a series of related diketone starting materials 1b–f in one continuous flow process from hydrazine 3a and these are collated in Table 2.

Furthermore, the structures of 4a and 4f were confirmed by X-ray crystallography (Figure 2). In both cases, the 5-membered rings are planar and the pyrazole hydrogen atoms are disordered over two positions. The molecules of both compounds in the crystals are linked together in H-bonded cycles. In the case of 4a, the cycles are R33(9) trimers [30], while the presence of bulky t-Bu groups in 4f results in the formation of R22(6) dimers (Figure 2).

After purging the continuous flow reactor apparatus [29] (Figure 1) with nitrogen, a 10% mixture of fluorine in nitrogen (v:v) was passed through the flow reactor via Input A at a prescribed flow rate that was controlled by a gas mass flow controller (Brooks Instruments). The flow reactor was cooled by an external cryostat to 5–10 °C. The diketone solution was injected by a mechanised syringe pump into the flow reactor channel at a prescribed flow rate through the substrate Input B. At the same time, the hydrazine mixture was injected by a mechanised syringe pump at Input C, into the flow reactor via a T-piece, at a prescribed flow rate. All flow streams were passed through the reactor and the product mixture was collected in a vessel containing water. The collected mixture was then extracted from DCM (3 × 30 mL) and washed with sodium bicarbonate (30 mL) and water (30 mL). The combined extracts were then dried (MgSO4), filtered and the solvent evaporated to give a solid residue, which was purified by recrystallisation or column chromatography on silica gel to give the desired 4-fluoropyrazole product.

© 2011 Breen et al; licensee Beilstein-Institut.
This is an Open Access article under the terms of the Creative Commons Attribution License (http://creativecommons.org/licenses/by/2.0), which permits unrestricted use, distribution, and reproduction in any medium, provided the original work is properly cited.
The license is subject to the Beilstein Journal of Organic Chemistry terms and conditions: (http://www.beilstein-journals.org/bjoc) 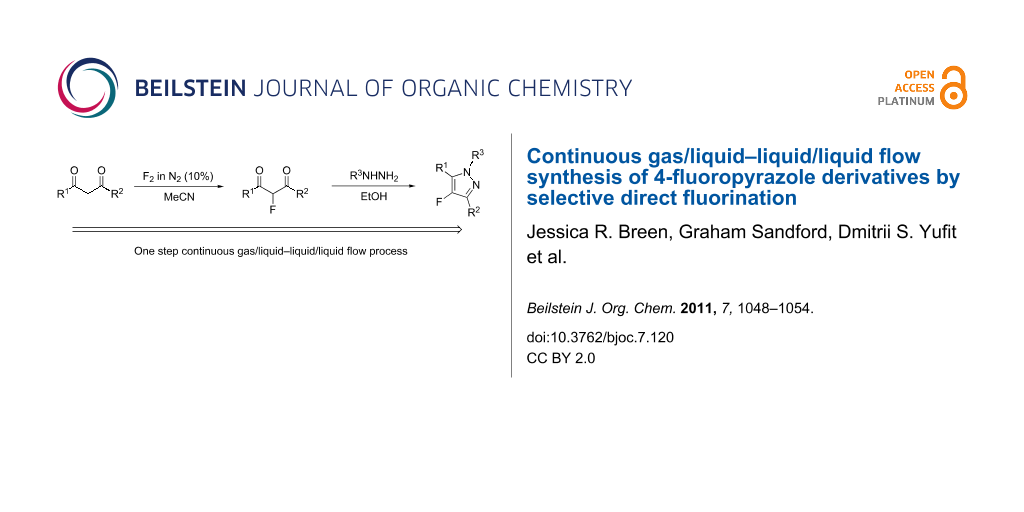