All articles from this author
Chan Pil Park


All articles from this author
Dong-Pyo Kim

A triple-channel microreactor fabricated by means of a soft-lithography technique was devised for efficient biphasic gas–liquid reactions. The excellent performance of the microreactor was demonstrated by carrying out photosensitized oxygenations of α-terpinene, citronellol, and allyl alcohols.

Microreactors have recently attracted much interest among the scientific community for performing laboratory operations on small scales [1-23]. One of the major driving forces for the development of these devices is their unique characteristics compared to those of classical reaction vessels, such as large surface-to-volume ratio, diffusion dominated mass transfer, fast and efficient heat dissipation, and the capability of spatial and temporal control of the reagents or products. These advantages have been exploited for various purposes such as performing selective reactions with highly unstable intermediates [24,25], improving heterogeneous catalysis [26-29], multi-step synthesis [30,31], process safety [32-34], photo-reactions [35-39], gas-liquid reactions [40-43], etc.

PDMS was used to fabricate the triple-channel microreactor for biphasic gas–liquid reactions. It is the most commonly used material for microfluidic devices due to the ease of fabrication and its optical transparency. Although microfluidic devices made of PDMS suffered from swelling problems caused by nonpolar organic solvents [46], we found that organic reactions can conveniently be performed in polar organic solvents such as DMF, DMSO, acetonitrile, etc., without any noticeable problems. The dimension of the middle channel of the fabricated triple-channel microreactor was 33 cm × 250 μm × 40 μm (volume = 3.3 μL). The outer parallel channels were 250 μm in width and 40 μm in depth. The membrane separating the parallel channels was 100 μm thick (for details of the fabrication, see the Supporting Information File 1); an optical image of the fabricated microreactor is shown in Figure 2.

Photosensitized oxygenation was chosen as a biphasic gas–liquid reaction to study the efficiency of the triple-channel microreactor. Photooxygenations in classical reaction vessels suffer from long reaction times due to restricted spatial illumination. In addition, the short lifetime of singlet oxygen in solutions, the low interfacial area between the oxygen and the reaction solution, and the long molecular diffusion distances significantly reduce the reaction efficiency. In this context triple-channel microreactors could be quite useful as they comprise all the required elements for photosensitized oxygenations, namely continuous-flow processing, large gas–liquid interfacial area, short molecular diffusion distances, and very high surface illumination homogeneity.

The photosensitized oxygenation of citronellol is an industrially important synthetic transformation [47] as it is used for bulk production of a fragrance, rose oxide (Scheme 1). The reaction was performed with methylene blue as a sensitizer in acetonitrile.

The microreactor was irradiated with a 16 W white LED light source (FAWOO-Tech. Korea, LH16-AFE39S-White) kept in close contact. The reaction mixture (a solution of citronellol and methylene blue in acetonitrile) was pumped into the middle channel without any presaturation with O2. The outer channels were closed from one end and oxygen was pumped at a flow rate that was 10 times higher than that of the solution in the middle channel. The batch reaction was performed in a 50 mL round bottom flask and irradiated with the same light source.

In the microreactor the reaction was completed within a few minutes whereas it took several hours to complete in the flask. The results are attributed to very high gas–liquid contact area and illumination area-to-volume ratio for the microreactor compared to that of the round bottom flask. In addition, high illumination homogeniety of the microreactor also plays an important role. These factors make the triple-channel microreactor quite promising for photosensitized oxygenation reactions. The ratio of hydroperoxides 2 and 3 were found to be identical (1:1.5 as determined by 1 H NMR) in both the microreactor and the batch reactor. It was particularly noticeable that reactions carried out under higher reactant concentration in the triple-channel microreactor took almost the same time to reach completion as at lower concentration, whereas in the batch reaction conversion was incomplete even after several hours (Table 2).

To compare the productivity for scale-up synthesis, the space–time yield of the triple-channel microreactor and that of the round bottom flask was calculated at various times during the course of the reaction. The space–time yield data reveals that triple-channel microreactors are quite promising for performing efficient photosensitized oxygenation of citronellol in condensed solutions that would minimize the waste of solvents.

The photosensitized oxygenation of α-terpinene is a Diels–Alder type [4 + 2] cycloaddition reaction. The product of the reaction is ascaridole, which is widely used as an anthelmintic drug, in tonic drinks and in food flavoring [49]. The reaction was successfully carried out in the triple-channel microreactor with methylene blue as a sensitizer, as above. Significant reduction in the reaction time was again observed when compared to the batch reaction (Table 4). Very high space–time yield of the triple-channel microreactor in comparison to the batch reactor indicates that the microreactor is quite suitable for scaled-up production of the ascaridole.

In conclusion, we developed a triple-channel microreactor for biphasic gas–liquid reactions. In this microreactor, oxygen gas in two outer channels efficiently diffused into the liquid reactants in the middle channel through an extremely large effective interfacial area (area-to-volume ratio). The chemical synthetic efficiency was demonstrated by performing photosensitized oxygenation of α-terpinene, citronellol and allyl alcohols. As a result of the increased illumination as well as the increased gas–liquid contact area per unit volume, the triple-channel microreactor exhibited better performance in the oxygenations of citronellol, allyl alcohols and α-terpinene compared to the batch reactor, or even compared to a typical dual-channel microreactor [44].

This work was supported by the National Research Foundation of Korea (NRF) grant funded by the Korea government (MEST) (No. 2008-0061983).

© 2011 Maurya et al; licensee Beilstein-Institut.
This is an Open Access article under the terms of the Creative Commons Attribution License (http://creativecommons.org/licenses/by/2.0), which permits unrestricted use, distribution, and reproduction in any medium, provided the original work is properly cited.
The license is subject to the Beilstein Journal of Organic Chemistry terms and conditions: (http://www.beilstein-journals.org/bjoc) 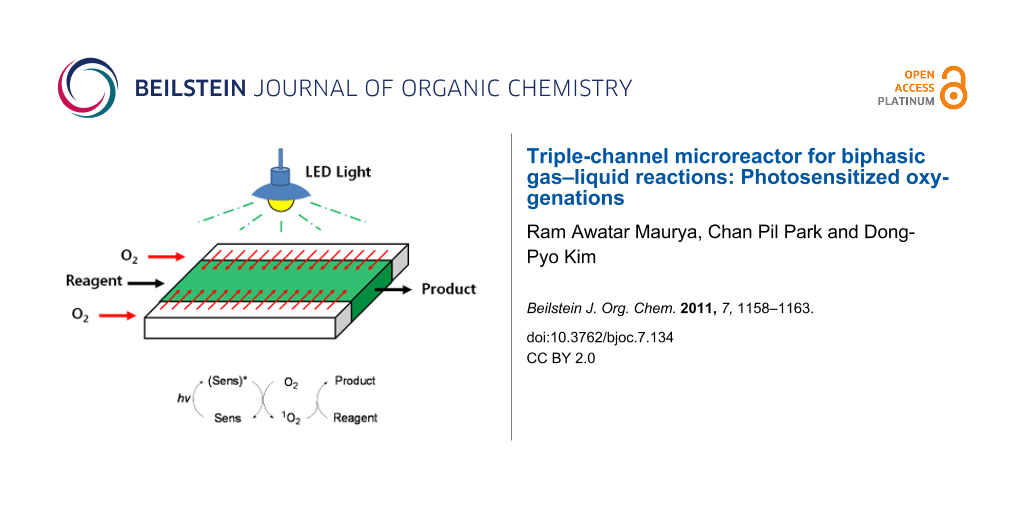