All articles from this author
Meiru Zheng


All articles from this author
Yang Li

A facile synthesis of hitherto unreported 3-(2-benzofuroyl)carbazoles 3a–k, 3,6-bis(2-benzofuroyl)carbazoles 5a–k, and naphtho[2,1-b]furoylcarbazoles 3l and 5l is described. The synthesis mainly relies on the ultrasound-assisted Rap–Stoermer reaction of 3-chloroacetyl- (1) or 3,6-dichloroacetyl-9-ethyl-9H-carbazole (4) with various salicylaldehydes 2a–k as well as 2-hydroxy-1-naphthaldehyde (2l) in CH3CN with the presence of PEG-400 as catalyst. The procedure offers easy access to benzofuroylcarbazoles in short reaction times and the products are obtained in moderate to good yields.

On the other hand, the benzofuran derivatives are an important class of heterocyclic compounds that are known to possess important biological properties [31-33]. Especially, recent studies have shown that some benzofuroyl-based compounds display important biological properties as antimicrobial [34], anticonvulsant, anti-inflammatory [35], anti-tumor [36], and antifungal [37,38] activities. On account of these findings, extensive synthetic efforts have been devoted to the development of more novel and interesting benzofuroyl-based compounds [39-43].

We have recently reported the synthesis of quinolyl-substituted carbazoles [44] and benzofuranyl-substituted quinoline [45]. Thus, in light of the above findings and in the context of our ongoing work on the synthesis of new heterocyclic compounds, we found it an attractive idea to construct new prototypes combining both the carbazole ring system and benzofuran framework in the same molecule. Such compounds are not only synthetically challenging but may also be vitally important for pharmacological studies or in the realization of new medicinal properties. Therefore, we report herein the synthesis of a series of novel 3-(2-benzofuroyl)carbazoles and 3,6-bis(2-benzofuroyl)carbazoles.

In order to synthesize the targeted compounds through a facile and direct methodology, we devised a route that made use of the Rap–Stoermer reaction [46], and which could provide opportunity for the direct construction of 2-benzofuroyl-based compounds through base-mediated reaction of salicylaldehydes with α-haloketones. The synthetic route developed in our laboratory for the preparation of 3-(2-benzofuroyl)carbazoles 3a–k by the Rap–Stoermer reaction of 3-chloroacetyl-9-ethyl-9H-carbazole (1) with a variety of salicylaldehydes 2a–k is summarized in Scheme 1.

The Rap–Stoermer reaction was normally performed in alcoholic medium but often produced poor to moderate yields of benzofuran products [47,48]. Considering this fact, we conducted our own initial investigation towards the synthesis of 3a according to reported methods under solvent-free [49] or solvent-free, microwave-irradiation conditions [50]. Unfortunately, it was found that the Rap–Stoermer reaction did not occur or gave intractable, complex mixtures (as observed by TLC), according to both methods. More recently, Shang et al. [51] described the base-mediated 4-dimethylaminopyridine (DMAP)-catalyzed Rap–Stoermer reaction for the synthesis of 2-benzofuroyl compounds in good yields between salicylaldehydes and halogenated ketones in water. Although the methodology is elegant and impressive, our attempts to follow the route to synthesize 3a were also frustrated by the very complex mixture of the resulting products, from which we could not separate any desired products in appreciable yields. After many trials, we found that when the Rap–Stoermer reaction was carried out with PEG-400 (0.5 equiv) as catalyst in the presence of K2CO3 as base in refluxing CH3CN for 10 h, the desired benzofurans 3a were obtained, but the attempt was still plagued by low yield. In this reaction the use of 0.5 equivalents of PEG-400 was found most suitable with 1 and 2a to provide a maximum yield of 3a of only 29%. There was no further improvement in the yields upon increasing the amount of catalyst or the reaction time. As a result, attempts to find an alternative approach are still very desirable.

Recently, the ultrasound technique has increasingly been used in synthetic organic chemistry. A large number of organic reactions can be carried out with a higher yield, in shorter reaction time and under milder conditions with the aid of ultrasonication. For example, Palimkar et al. [52] ever reported a facile ultrasound-promoted synthesis of benzo[b]furan derivatives. Accordingly, the versatility of the ultrasound technique prompted us to further experiment with this approach. Interestingly, we found that when the same reaction as above was adopted in conjunction with ultrasonic irradiation, an improvement in terms of yield (72%) and reaction time (3 h) was achieved. In addition, we also observed that if the ultrasound-assisted Rap–Stoermer reaction was performed in the absence of PEG-400, the desired products were not obtained in appreciable yields, which indicates that both the catalysis by PEG-400 and the ultrasonication together promoted this reaction. To establish the generality and applicability of this method, a wide variety of salicylaldehydes were subjected to the same set of conditions to furnish the corresponding 3-(2-benzofuroyl)carbazole derivatives. It was found that all the salicylaldehydes partners worked well. The reactions were generally complete within 4 h and the corresponding 3-(2-benzofuroyl)carbazole derivatives 3a–l were produced in good yields of 60–72%, as shown in Table 1.

The results summarized in Table 1 indicated the scope and generality of the PEG-400-catalyzed, ultrasound-assisted Rap–Stoermer reaction with respect to various salicylaldehydes. Moreover, the presence of fluorine, chlorine, or bromine substituents (entries 6–11) is not problematic, thereby providing a potential handle for further functionalization (eg., Heck and Suzuki–Miyaura reactions) of the corresponding products 3f–k. In the cases of entries 9–11, the tert-butyl-substituted products 3i–k were isolated in pure form as semisolids by column chromatography over silica gel.

Next, we successfully extended our study towards the Rap–Stoermer reaction of 3,6-dichloroacetyl-N-ethyl-9H-carbazole (4) with these salicylaldehydes, under the same reaction conditions, to furnish the symmetrically substituted 3,6-bis(2-benzofuroyl)carbazoles 5a–k, as shown in Table 2. The reaction of 3,6-dichloroacetyl-N-ethyl-9H-carbazole (4) proceeded smoothly and gave the desired compounds 5a–k in 49–69% yields within 6 hours.

Encouraged by these results, we also attempted the reaction of chloroacetylcarbazoles 1 and 4 with 2-hydroxy-1-naphthaldehyde (2l) with the aim of constructing novel naphthofuran derivatives. Interestingly, 2-hydroxy-1-napthaldehyde was equally amenable to the conditions and gave the corresponding 3-(2-naphtho[2,1-b]furoyl)-N-ethyl-9H-carbazole (3l) and 3,6-bis(2-naphtho[2,1-b]furoyl)-N-ethyl-9H-carbazole (5l) in good yields of 64% and 50%, respectively (Scheme 2).

All the newly synthesized compounds 3a–l and 5a–l were characterized by spectral analysis. All data were fully consistent with the assigned molecular structure (see Supporting Information File 1).

In conclusion, we have achieved an efficient and straightforward method for the construction of a variety of novel benzofuroyl- as well as naphtho[2,1-b]furoyl-substituted carbazoles through an PEG-400-catalyzed and ultrasound-assisted Rap–Stoermer reaction. These molecules should allow us, in the future, to investigate structure–activity relationships in various biological tests or photonic applications. The ready availability of starting materials, mild reaction conditions, short reaction times, experimental simplicity and satisfactory yields contribute to the usefulness of this method. The possible biological activity of the described compounds possessing the benzofuran and carbazole skeletons remains to be studied. In addition, the products represent potentially useful synthetic building blocks in medicinal chemistry.

Melting points (uncorrected) were determined by using a WRS-1B melting-point apparatus. Ultrasonication was performed in a KQ-250B medical ultrasound cleaner at a frequency of 40 KHz and output power of 250 W (Built-in heating 30–80 °C, thermostatically adjustable). 1H NMR and 13C NMR spectra were recorded on a Bruker AVANCE NMR spectrometer with CDCl3 or DMSO-d6 as the solvent. The reported chemical shifts (δ values) are given in parts per million downfield from tetramethylsilane (TMS) as the internal standard. HRMS (ESI) data were acquired on a Bruker Custom micrOTOF-Q 125 high-resolution mass spectrometer. The progress of reactions was monitored by thin-layer chromatography (TLC) on silica gel GF254 with EtOAc/PE as eluent. Petroleum ether (PE) refers to the fraction that boils in the range of 60–90 °C.

General procedure for the preparation of 3-(2-benzofuroyl)-N-ethyl-9H-carbazoles 3a–l. To a stirred solution of 3-chloroacetyl-9-ethyl-9H-carbazole (1) (136 mg, 0.5 mmol) in acetonitrile (4 mL), the required salicylaldehydes 2a–k or 2-hydroxy-1-naphthaldehyde (2l) (0.55 mmol), potassium carbonate (138 mg, 1 mmol) and PEG-400 (98 mg, 0.25 mmol) were added. The resulting mixture was sonicated at 80 °C for 2–4 hours. After the reaction was complete (TLC), the mixture was cooled to room temperature, poured into 5 mL of water and filtered to give the crude product, which was then purified by silica gel column chromatography with EtOAc/PE (1:6) as eluent. The melting points and yields of all the compounds are summarized in Table 1 and the spectral and analytical data are given in Supporting Information File 1.

General procedure for the preparation of 3,6-bis(benzofuroyl)-N-ethyl-9H-carbazoles 5a–l. To a stirred solution of 3,6-dichloroacetyl-9-ethyl-9H-carbazole (4) (174 mg, 0.5 mmol) in acetonitrile (4 mL), the required salicylaldehydes or 2-hydroxy-1-naphthaldehyde (1.1 mmol), potassium carbonate (276 mg, 2 mmol) and PEG-400 (98 mg, 0.25 mmol) were added. The resulting mixture was sonicated at 80 °C for 3–6 hours. After the reaction was complete (TLC), the mixture was cooled to room temperature, poured into water and filtered to give the crude product, which was then purified by silica gel column chromatography with EtOAc/PE (1:6) as eluent. The melting points and yields of all the compounds are summarized in Table 2 and the spectral and analytical data are given in Supporting Information File 1.

This work was financially supported by the Foundation of Liaoning Province Key Laboratory of Applied Chemistry (Grant No. 2008S001).

Water inside β-cyclodextrin cavity: amount, stability and mechanism of binding

© 2011 Gao et al; licensee Beilstein-Institut.
This is an Open Access article under the terms of the Creative Commons Attribution License (http://creativecommons.org/licenses/by/2.0), which permits unrestricted use, distribution, and reproduction in any medium, provided the original work is properly cited.
The license is subject to the Beilstein Journal of Organic Chemistry terms and conditions: (http://www.beilstein-journals.org/bjoc) 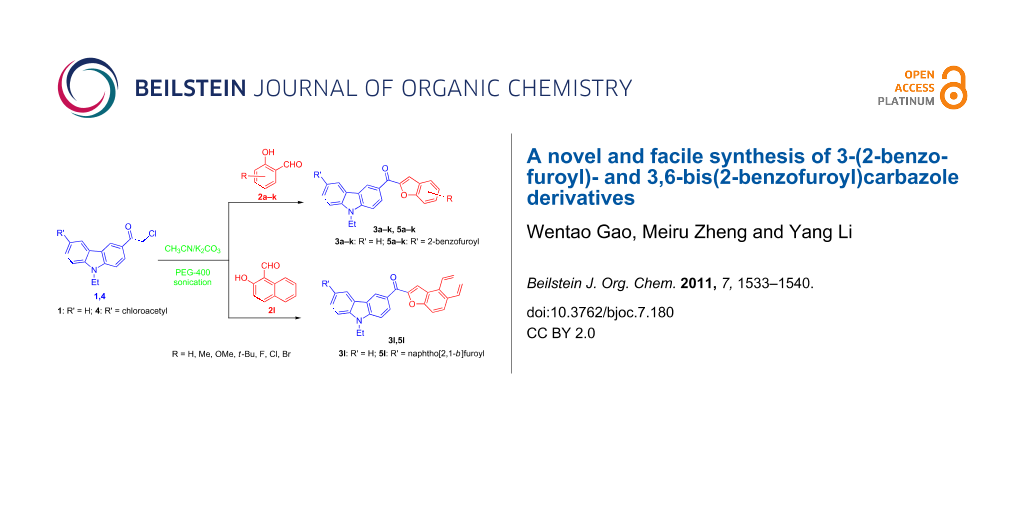