All articles from this author
Karola Rück-Braun

Photoswitchable peptides were synthesized by using cysteine- and auxiliary-based native chemical ligation reactions. For this purpose, the two regioisomeric azobenzene building blocks 3,4'-AMPB thioester 1b and 4,4'-AMPB thioester 2b were employed in the ligation reactions. While 4,4'-AMPB requires the 4,5,6-trimethoxy-2-mercaptobenzyl auxiliary to minimize reduction of the diazene unit, 3,4'-AMPB can be used in combination with the 4,5,6-trimethoxy-2-mercaptobenzyl auxiliary as well as the Nα-2-mercaptoethyl auxiliary. Thus, 3,4'-AMPB derivatives/peptides proved to be significantly less prone to reduction by aliphatic and aromatic thiols than were the 4,4'-AMPB compounds.

Optical switches not only offer the advantage to elucidate, but also to control biological processes with high spatial and temporal resolution by using light, either in vitro or in vivo [1]. In this context, azobenzenes remain a privileged class of photoswitches, and typical applications based on light-triggered reversible conformational control of cyclic, helical or beta-hairpin peptides have been intensively reviewed [2,3]. Current research in this field focuses on advanced methods and designs for the synthesis of complex azopeptides and azoproteins for ambitious biophysical studies, and also for intracellular applications. In this respect, an increased and predictable stability of azobenzene building blocks under reducing conditions seems to be a prerequisite in light of synthetic challenges, but also when considering the reducing intracellular environment. We recently reported on the synthesis, properties and applications of a series of novel azobenzene ω-amino acids, with a preference for meta-substitution patterns. Our purpose was amongst other things (i) to increase flexibility, and (ii) to suppress resonance effects in order to enhance the stability of the diazene unit [4,5]. Since methods based on native chemical ligation (NCL), e.g., NCL with Nα-acyl transfer auxiliaries, have gained considerable interest in the past two decades [6], we reasoned that a comparative ligation study with the Boc-protected azobenzene ω-amino acids Boc-3,4'-AMPB 1a and Boc-4,4'-AMPB 2a may result in an in-depth analysis of the redox-stability of these building blocks under the reducing conditions of thiol-based ligation methods. Generally, native chemical ligation allows the coupling of two unprotected peptides in neutral aqueous solution: a C-terminal thioester peptide and either an N-terminal cysteine peptide or Nα-auxiliary-capped peptides. However, for elucidating the complex redox chemistry of the two azobenzene building blocks under the reducing conditions of ligation methods, we solely applied the Boc-protected azobenzene ω-amino acid thioesters 1b and 2b instead of a C-terminal thioester peptide. We explored the conventional cysteine-based NCL with Cys-peptide 3, and also screened the application of the TFA-cleavable 4,5,6-trimethoxy-2-mercaptobenzyl (Tmb) and 1-(2,4-dimethoxyphenyl)-2-mercaptoethyl auxiliaries by using peptides 4 and 5 (Figure 1) [6-8], in order to circumvent the need for the presence of a cysteine at the ligation site.

The peptide motif in peptides 3, 4 and 5 is based on a specific binding sequence for PDZ recognition [9]. Numerous scaffolding proteins contain multiple PDZ domains for their interaction with PDZ-binding motifs at the C-terminus of transmembrane channels and receptors or other intracellular signaling proteins. Class 1 interactions involve a (S/T)-X-(V/I/L)-COOH sequence motif, and examples for these interactions include the proteins PSD-95, Fas or NHERF 1 [10]. Fas (APO-1/CD95), for example, is a cell surface receptor, belonging to the tumor-necrosis-factor receptor superfamily, which induces apoptosis. Fas-associated phosphatase-1 (FAP-1) is a Fas binding protein, which interacts with 12 to 15 of the C-terminal amino acids of the Fas receptor; however, the necessary and sufficient region for binding consists of the three C-terminal amino acids (SLV) [11-13]. PDZ-domain-containing proteins are superb examples of allosteric systems built up by semirigid domains able to interact by means of flexible regions, and therefore they seem to be ideally suited for biophysical function studies with photoswitchable ligands. For instance, Fas-associated studies in certain cells using the tripeptide SLV suggest that this small peptide alone can induce apoptosis [14,15]. Related peptides containing class I C-terminal sequence motifs, e.g., SKV, are also derived from viral origins [16]. The latter specific binding motif is associated with H5N1 influenza infections. We reasoned that the attachment of a photoswitch next to SXV PDZ-binding motifs would be a powerful strategy for exploring the function of these PDZ-binding peptide ligands in vitro and in vivo. For the synthetic ligation studies presented herein we had to place the ligation junction next to the third amino acid serine of the SKV binding motif. In the case of the conventional NCL, we used cysteine at the ligation site, and for the auxiliary mediated ligations, we decided to introduce auxiliary-glycine-conjugates at the N-terminus, due to the steric limitations of this type of ligation reaction [6-8]. After ligation, the SKV binding motif in the photoswitchable azopeptides should only be accessible in the dark trans-azo state (Scheme 1), whereas light switching to the cis-azo state should result in unfavorable interactions between the N-terminus, which follows behind the azo-switch, and the side chains that are critical for PDZ recognition (as exemplified in Scheme 1 for the 4,4'-substituted azobenzene system). However, the design presented herein, in combination with an appropriate ligation method, seems also to be applicable to the synthesis and evaluation of photoswitchable protein analogues, for example receptors with the photoswitch placed in the direct neighborhood of the specific C-terminal binding motif.

The azobenzene ω-amino-acid thioesters 1b and 2b were prepared by following and applying literature procedures (Supporting Information File 1) [4,17]. The syntheses of the auxiliary-linked glycine conjugates 7 and 8 were accomplished by using literature protocols developed by Dawson, Offer and MacMillan [7,8] (Figure 2).

The Cys-peptide 3 and the Nα-auxiliary peptides 4 and 5 were assembled on Wang resin by manual Fmoc-based peptide synthesis using standard amino-acid building blocks (Scheme 2) [4]. Commercially available preloaded Wang resin was used, and HBTU was applied as the coupling reagent in the presence of DIPEA in NMP. Removal of the temporary Fmoc-protecting group was achieved by using 20% piperidine in NMP. Cleavage from the resin and removal of the permanent tert-butyl and trityl protecting groups was carried out with a mixture of trifluoroacetic acid, water and triisopropylsilane. The peptides 3 and 4 were purified by preparative RP-HPLC and isolated in 86% and 56% yield, respectively. Peptide 9 with a protected thiol moiety was treated with Hg(OAc)2 in TFA, followed by DTT according to the literature [8], and the deprotected peptide 5 was purified by preparative RP-HPLC and isolated in 64% yield.

All attempts to ligate azobenzene ω-amino acid thioester 1b in phosphate buffer in the presence of TCEP·HCl and guanidinium hydrochloride failed, because of the poor solubility of the azobenzene thioester in the aqueous buffer as well as in buffer/NMP mixtures. Therefore, a ligation protocol of Danishefsky et al. was applied using DMF as the solvent [18]. The ligations were realized by reaction of the appropriate peptide 3, 4 or 5 with an excess of the azobenzene thioester (1.9 equiv), and TCEP·HCl (2.75 equiv) in the presence of Na2HPO4 (5.5 equiv, pH 7.3) at room temperature, and the reaction courses were monitored by analytical RP-HPLC (Supporting Information File 1). The ligation reactions were conducted under normal lighting conditions, and therefore small amounts of the cis-azobenzene forms of the thioesters 1b/2b and of the ligation products 10–15 were detected during HPLC monitoring (Supporting Information File 1). The results of all ligation courses prior to purification by chromatography are summarized in Table 1.

aReaction conditions: 1.9 equiv of azobenzene thioester 1b or 2b, TCEP·HCl (2.75 equiv), Na2HPO4 (5.5 equiv), DMF, rt. Peptides 3–5 were employed as the symmetric disulfides and were reduced in situ by TCEP. bConversion of 1b or 2b to the hydrazines Red-1b or Red-2b related to the unreacted excess of 1b or 2b in the ligation mixture during HPLC-monitoring after the appropriate reaction time; – : Red-1b was not detected. cHPLC-based ratio determined by HPLC-monitoring after work-up and lyophilization of the crude ligation mixture. dIsolated yield after preparative RP-HPLC. eReinvestigated ratio given in brackets.

In ligation reactions employing the N-terminal Cys-peptide 3, nearly complete conversion was determined after five hours, but stirring was nevertheless continued overnight (Table 1, entries 1 and 4). For peptide 5 containing the 4,5,6-trimethoxy-2-mercaptobenzyl auxiliary, complete consumption of the starting material was detected after 23–24 h (Table 1, entries 3 and 6). In ligation reactions employing the Nα-2-mercaptoethyl auxiliary peptide 4 reaction times were doubled for complete turnover (Table 1, entries 2 and 5). These results are in accordance with a chemoselective bimolecular thioester exchange prior to the S- to N-acyl transfer through a five-membered transition state for Cys-peptide 3, a six-membered transition state for 4,5,6-trimethoxy-2-mercaptobenzyl auxiliary peptide 5, and a sterically more demanding five-membered transition state for racemic Nα-2-mercaptoethyl auxiliary peptide 4 [6].

The ligation reaction of 3,4'-AMPB thioester 1b with the 4,5,6-trimethoxy-2-mercaptobenzyl auxiliary peptide 5 furnished ligation peptide 12 in 38% yield (Table 1, entry 3). In this case, no hydrazine species Red-12 were detected at all (Table 1, entry 3). In addition, the ligation reaction of 4,5,6-trimethoxy-2-mercaptobenzyl auxiliary peptide 5 and 4,4'-AMPB thioester 2b was also successfully accomplished, furnishing a ratio of 90:10 for 15/Red-15, and the pure ligation product 15 was isolated in 45% yield (Table 1, entry 6). Thus, the 4,5,6-trimethoxy-2-mercaptobenzyl auxiliary applied in peptide 5 seems to be of general use for both azobenzene systems 1b and 2b, with a manageable tendency toward reduction in the case of the 4,4'-AMPB thioester 2b.

The reduction sensitivity observed for the 4,4'-AMPB-derived thioester 2b and its ligation peptides, may be rationalized by the following considerations [19,20]: The initial addition of a thiol to an electron-poor diazene double bond is a reversible reaction, furnishing a zwitterionic adduct intermediate A en route to an N-sulfenohydrazodiarene B, with a rather labile N–S bond (Scheme 3, reaction 1). Aliphatic thiols readily undergo adduct formation towards the N-sulfenohydrazodiarene intermediates B because of their higher nucleophilicity. Accordingly, we observe a higher tendency toward reduction when applying the aliphatic Nα-2-mercaptoethyl auxiliary in comparison to the aromatic 4,5,6-trimethoxy-2-mercaptobenzyl auxiliary. Furthermore, only 4,4'-substituted azobenzene systems, e.g., 2b and peptide 14, furnish resonance-stabilized zwitterionic intermediates A. Finally, reduction is completed by a nucleophilic attack of the second aliphatic thiol molecule at the N-sulfenohydrazodiarene B, yielding the symmetric disulfide and the respective hydrazine thioester or hydrazine peptide (Scheme 3, reaction 2). The reduction of diazene units by thiols has been intensively studied in the past for electron-poor azobenzenes or azodicarboxylates, en route to symmetrically and asymmetrically substituted disulfides [21-23].

The final cleavage of the Boc-protecting group, the Nα-2-mercaptoethyl auxiliary and the 4,5,6-trimethoxy-2-mercaptobenzyl auxiliary in the 3,4'-AMPB ligation peptides 12 and 14 was successfully achieved with 90% TFA under standard conditions furnishing peptide 16 in 94% and 89% yield, respectively, after purification by preparative RP-HPLC (Scheme 4). Similarly, the Boc-protected 4,4'-AMPB ligation peptide 14 derived from the Nα-2-mercaptoethyl auxiliary peptide 4 was deprotected and purified yielding peptide 17 in 81% yield.

In conclusion, we have demonstrated the high redox stability of the Boc-protected 3,4'-AMPB thioester 1b when applying Nα-auxiliary ligation methods en route to photoswitchable peptides containing the C-terminal PDZ binding motif SKV. The positioning of the carbonyl group relative to the diazene unit in the 3,4'-AMPB-derived thioester 1b and its peptides predictably decreases the reactivity towards unwanted redox side-reactions upon application of aliphatic as well as aromatic thiols in Nα-auxiliary ligation strategies using peptides 4 and 5. In stark contrast, the Boc-protected 4,4'-AMPB thioester reproducibly furnished peptide 15 only in combination with the 4,5,6-trimethoxy-2-mercaptobenzyl auxiliary peptide 5 during the ligation course and work-up, whereas the Nα-2-mercaptoethyl auxiliary peptide 4 preferentially gave the hydrazine ligation peptide Red-14 besides the azobenzene ligation peptide 14. Our future efforts directed towards the synthesis of photoswitchable peptides will focus on water-soluble 3,4'-AMPB building blocks being applicable in native chemical ligation methods in aqueous media.

We thank the Technische Universität Berlin and the Deutsche Forschungsgemeinschaft (DFG-Cluster of Excellence 314) for financial support.

© 2012 Zeyat and Rück-Braun; licensee Beilstein-Institut.
This is an Open Access article under the terms of the Creative Commons Attribution License (http://creativecommons.org/licenses/by/2.0), which permits unrestricted use, distribution, and reproduction in any medium, provided the original work is properly cited.
The license is subject to the Beilstein Journal of Organic Chemistry terms and conditions: (http://www.beilstein-journals.org/bjoc) 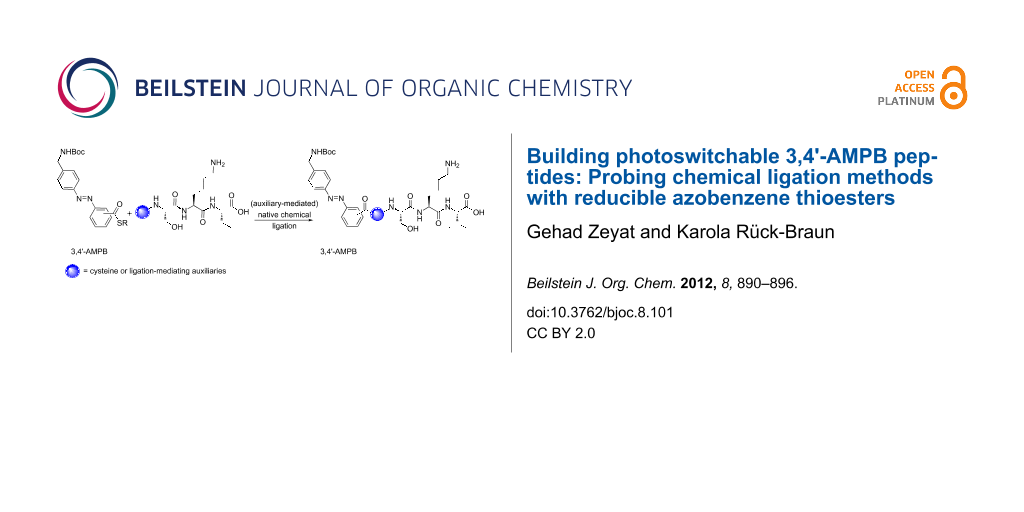