On the proposed structures and stereocontrolled synthesis of the cephalosporolides


All articles from this author
Gregory B. Dudley

The spiroketal moiety is common in natural products of marine, plant, insect, and bacterial origins [1-11]. The rigidity of the spiroketal provides defined orientation of pendant functional groups, and there is a strong correlation between bioactivity and spiroketal stereochemistry in many natural spiroketals. For example, cephalostatin and ritterazine feature thermodynamically disfavored spiroketals that are more cytotoxic than their stereoisomers [12]. Other prominent cytotoxic spiroketals include spongistatin [7] and norhalichondrin [13,14].

Spiroketal-containing pheromones are especially prominent in insect communication, with the spiroketal stereochemistry often relaying important information [15]. For example, the R-enantiomer of the olive-fly sex pheromone is attractive to males, while the S-enantiomer attracts females (Figure 1). Chalcogran, a sex pheromone secreted by the male bark beetle, is isolated from natural sources as a mixture of diastereomers. However, Byers et al showed that the spiroketal (2R,5R)-isomer induces the strongest responses from both females and males [16]. In such cases it is interesting to conjecture that the natural pheromone signal may include a “time stamp”: release of a stereodefined, nonthermodynamic and labile spiroketal enables the detecting insect to gauge the age of the message based on the integrity of the spiroketal center. To duplicate such communication (e.g., for insect population control) requires the ability to prepare specific spiroketal stereoisomers. Anomeric effects typically guide the stereochemical preferences in 6,6 and 5,6-spiroketals [7,17-20], whereas 5,5-spiroketal stereochemistry is more difficult to predict [21] and control [22-25].

This report focuses on 5,5-spiroketal lactones of the cephalosporolide and related families (Figure 2) [26,27]. Cephalosporolides E and F are co-isolated as a mixture, and previous syntheses likewise produce these compounds as a mixture in the absence of methods to control the spiro-center [28-30]. However, it is quite possible that the microorganism produces one or the other of these isomers selectively, and that this material scrambles over time to a thermodynamic mixture. It is this mixture that is ultimately extracted, and if this conjecture is true, then the natural extract (mixture) would misrepresent the compound as used in the biological system. Cephalosporolide H, I, and the penisporolides, on the other hand, were isolated as single isomers [31]. The structures of these related spiroketals were tentatively proposed based on NOESY experiments, and by analogy to each other and to the confirmed structures of cephalosporolide E and F.

We recently reported the stereocontrolled synthesis of cephalosporolide H (reported structure) and its spiroketal isomer [32]. Our strategy featured the use of zinc salts to control the spiro-center using either steric biases or chelation, depending on pendant functionality (Scheme 1). Unfortunately, neither of the synthetic isomers provided data in complete agreement with data reported for the natural material.

Our synthesis of the reported structure of cephalosporolide H (1) and its spiroketal isomer (1b) are outlined in Scheme 2. The synthesis starts from D-pantolactone (4), which was converted into terminal alkyne 5 [32]. Alkyne 5 was coupled with (R)-1,2-epoxynonane to obtain internal alkyne 6, which was submitted to gold-catalyzed cycloisomerization [33] to afford spiroketals 7a and 7b (the silyl ether is concomitantly hydrolyzed) as a 1:1 mixture of isomers. Exposure of this mixture to zinc chloride promoted isomerization to provide 7a in >20:1 dr. TEMPO oxidation then completed the synthesis of 1, the reported structure of cephalosporolide H. The opposite spiroketal isomer 1a was prepared from 6 by palladium-catalyzed cycloisomerization (steric control), desilylation and TEMPO oxidation. In neither case did the characterization data match that of the natural material, and it is worth noting that NOE and NOESY experiments conducted on both isomers were inconclusive in attempts to differentiate them: similar NOESY cross-peaks were observed from both isomers.

We prepared the two remaining core diastereomers by similar routes (Scheme 3), starting by coupling terminal alkyne 5 with (S)-1,2 epoxynonane. Gold-catalyzed cycloisomerization (with desilylation) provided spiroketal diols 10a and 10b in a 32:68 ratio and in 89% total yield. Major spiroketal 10b could be converted to 10a in 15:1 dr by zinc-catalyzed isomerization. Both isomers (10a and 10b) were independently subjected to TEMPO oxidation to afford spiroketal lactones 1b and 1c. Spectroscopic data of 1b and 1c were similar to 1a and 1, respectively.

Attempts to secure an authentic sample and/or copies of original NMR spectra for the natural material were unsuccessful, but two candidates emerged as good fits to the reported data (Figure 3). Spectroscopic data for 1a and 1b were both nearly consistent with the data reported for cephalosporolide H, whereas data for 1 and 1c did not match (see Supporting Information File 1, Table S1 for a full comparison). In the absence of an authentic sample, a definitive assignment will not be possible, although we note that the relative stereochemistry of 1b corresponds to that of cephalosporolide F, the structure of which has been confirmed.

Coupling of the propargyl silyl ether 19 with the (R)-propylene oxide produced the internal alkyne 20 (Scheme 5). Gold(I) chloride in MeOH induced the spiroketalization of alkyne 20 with concomitant cleavage of the PMP acetal and partial cleavage of the TBS ether. After completion of the desilylation with TBAF, a mixture of 5,5-spiroketals 21a and 21b was obtained in 71% overall yield from 20. The mixture of diols 21a and 21b converged to 21a (epimer 21b no longer observable by 1H NMR) upon treatment with zinc chloride. TEMPO oxidation of diol 21a led to the formation of cephalosporolide E (2, admixed with a minor diastereomer tracing back to the Sharpless dihydroxylation reaction). Spectroscopic data for our synthetic material was in full agreement with the reported data for cephalosporolide E [28-30].

© 2012 Tlais and Dudley; licensee Beilstein-Institut.
This is an Open Access article under the terms of the Creative Commons Attribution License (http://creativecommons.org/licenses/by/2.0), which permits unrestricted use, distribution, and reproduction in any medium, provided the original work is properly cited.
The license is subject to the Beilstein Journal of Organic Chemistry terms and conditions: (http://www.beilstein-journals.org/bjoc) 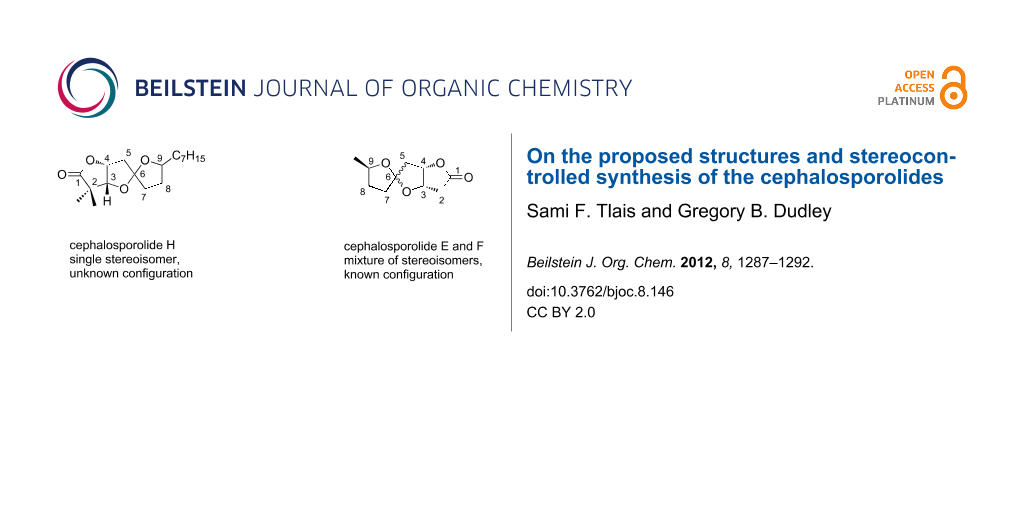