All articles from this author
Sven Mangelinckx


All articles from this author
Pieter Van der Veken


All articles from this author
Karl W. Törnroos


All articles from this author
Koen Augustyns


All articles from this author
Norbert De Kimpe

§ Aspirant of the “Institute for the Promotion of Innovation through Science and Technology – Flanders (IWT-Vlaanderen)”.
¶ Postdoctoral Fellow of the Research Foundation (FWO).

DPP IVs are proteases that specifically cleave off N-terminal dipeptides and are involved in the degradation of incretin hormones, including glucagon-like peptide-1 (GLP-1) and glucose-dependent insulinotropic polypeptide (GIP). GLP-1 is involved in the regulation of glucose homeostasis through stimulation of insulin secretion, inhibition of glucagon release, and delay of gastric emptying. It has been demonstrated that the presence of intravenous GLP-1 increases insulin secretion as a response to elevated glucose levels, and as such, GLP-1 can offer therapeutic benefits for patients with type 2 diabetes. Unfortunately, therapeutic application of GLP-1 is problematic due to the lack of oral activity and the rapid degradation by plasma DPP IV. Therefore, DPP IV inhibitors could offer a solution to this problem, as they can extend the duration of action of GLP-1 and prolong the beneficial effects [10-12].

Besides DPP IV, a few related enzymes are present in the family of DPPs, with DPP II, DPP8, DPP9 and FAP being the most important regarding the therapeutic potential, when focusing on the inhibitory potency and selectivity [10-12]. In the research focused on DPP II and DPP IV inhibitors, it has been found that the α,γ-diaminoacylpiperidine, (S)-2,4-diaminobutanoylpiperidine, is a lead compound in the development of a large series of highly potent and selective DPP II inhibitors [7-9] (Figure 1). Next to the α,γ-diaminoacylpyrrolidines and –piperidines, which exhibit a DPP inhibitory effect, some β-aminocarboxylamides, such as sitagliptin, are also known as DPP inhibitors [13]. Sitagliptin is a commercialized oral antihyperglycemic drug of the DPP IV inhibitor class [14].

As α,γ-diaminocarboxylamides, as well as β-aminocarboxylamides, are known for their activity as DPP inhibitors, an increasing interest to study the DPP inhibitory potency of analogous α,β-diaminocarboxylamides exists [15]. The synthesis of chiral α,β-diaminocarboxylic acid derivatives by asymmetric Mannich-type addition of enolates across activated imines, e.g., N-sulfinylimines [16-20], is one of the most common and versatile methods in organic chemistry and is continuously under development [1-3]. Recently, our research group elaborated the asymmetric synthesis of new chiral γ-chloro-α,β-diaminocarboxyl esters by highly diastereoselective Mannich-type reactions of N-(diphenylmethylene)glycine esters across a chiral α-chloro-N-p-toluenesulfinylimine [20], which belongs to the useful class of α-halo-imines [21-26]. However, transformation of γ-chloro-α,β-diaminocarboxyl esters into the corresponding carboxylic acids, en route to further coupling to carboxylamides, has proven to be unsuccessful, probably due to competitive reactions such as the formation of α,β-diamino-γ-butyrolactones [20].

The results discussed within the present paper demonstrate the synthesis and elaboration of chiral syn-γ-chloro-α,β-diaminocarboxylamide derivatives with excellent diastereoselectivity. In order to develop potential DPP inhibitors, the ring closure and deprotection of the α-amino functionality of the synthesized γ-chloro-α,β-diaminocarboxylamides were explored as well.

The stereoselective synthesis of chiral γ-chloro-α,β-diaminocarboxylamides was performed by using a Mannich-type addition of glycine amides 4 across chiral α-chloro-N-sulfinylaldimines 3.

Initially, the chiral α-chloro-N-sulfinylaldimines 3, including the new imines 3b and 3c derived from 2-chloro-2-ethylbutanal (1b) and 1-chlorocyclohexanecarboxaldehyde (1c), respectively, were efficiently prepared by condensation of α-chloroaldehydes 1 with (S)-(+)-p-toluenesulfinamide (2) in dichloromethane in the presence of Ti(OEt)4 (Scheme 1) [27].

The synthesis of N-(diphenylmethylene)glycinamides 4 was performed starting from N-Boc glycine, in accordance with literature procedures [28,29]. Based on our previously reported Mannich-type addition of glycine esters across chiral α-chloro-N-p-toluenesulfinylaldimine 3a [20], the influence of the base (LiHMDS or LDA) used for the deprotonation of glycine amides 4 on the syn- or anti-selectivity of the Mannich-type addition was investigated (Scheme 2).

Initially, the Mannich-type addition of glycine amide 4b across chiral α-chloro-N-p-toluenesulfinylisobutyraldimine (3a) was performed at −78 °C using 1.1 equiv of LDA. Upon 1H NMR analysis of the crude reaction mixture, the resulting syn-γ-chloro-α,β-diaminocarboxylamide syn-5b was formed with an excellent stereoselectivity (dr > 99:1) but the conversion was rather low. After crystallization, the syn-adduct syn-5b was isolated in a low yield of 16%. Repeating the Mannich-type addition of glycinamides 4 across chiral α-chloro-N-p-toluenesulfinylaldimines 3 with 1.1 equiv of LiHMDS resulted also in the formation of syn-γ-chloro-α,β-diaminocarboxylamides syn-5 with an excellent stereoselectivity (dr > 99:1). Because of the complete conversion of the substrates under these better reaction conditions (−78 °C, 15 min), the syn-adducts syn-5 could be isolated in higher yields (41–73%) after recrystallization. The diastereomeric ratio of these syn-γ-chloro-α,β-diaminocarboxylamides syn-5 (dr > 99:1) was determined by a combination of 1H NMR, 13C NMR and HPLC analysis in which no signals from other diastereomers could be detected.

In contrast to the Mannich-type addition of glycine esters across chiral α-chloro-N-p-toluenesulfinylimine 3a [20], the diastereoselectivity of the Mannich-type addition of glycinamides 4 across chiral α-chloro-N-p-toluenesulfinylaldimines 3 was independent of the base used. The absolute stereochemistry of (SS,2S,3S)-γ-chloro-α,β-diaminocarboxylamides syn-5 was unambiguously determined by means of an X-ray diffraction analysis of compound syn-5b (Figure 2), in combination with the analogous NMR chemical shifts (Hα: δ = 4.91–5.20 ppm, Hβ: δ = 3.74–4.05 ppm) and the characteristic vicinal coupling constants (3JHα-Hβ = 0–1.1 Hz) of all derivatives syn-5a–f.

The monosubstituted tertiary amide enolates obtained by deprotonation of N-(diphenylmethylene)glycinamides 4 are expected to have the Z-geometry in which A(1,3) interactions are minimized and Li-chelation stabilizes the conformation (Scheme 3), regardless of the base that was used [30,31].

Reaction of the Z-enolates via a cyclic chelated six-membered chairlike transition-state model TS-6a, would have resulted in anti-addition products anti-5 in analogy with our previously obtained results on the synthesis of (SS,2S,3R)-γ-chloro-α,β-diaminocarboxyl esters [20]. However, starting from glycinamides 4, due to the important 1,3-diaxial interaction between the haloalkyl group (–CClR2) and the cyclic amine moiety [–N(CH2)n] in this transition state, TS-6a is highly disfavored. The formation of the (SS,2S,3S)-γ-chloro-α,β-diaminocarboxylamides syn-5 can be explained by a boatlike transition-state model TS-6b involving the (E)-N-p-toluenesulfinylaldimines 3 [32-35]. This less sterically hindered transition state TS-6b, in which the haloalkyl group (–CClR2) occupies the less hindered pseudoequatorial position, and the corresponding Li-adduct 7 are stabilized by the interaction between the Li-cation, the diphenylmethyleneamino group, and the sulfinylimine nitrogen.

The reversal of the enantiotopic face selectivity in the reaction of the N-sulfinylimines 3 with the glycinamides 4, as compared to the reaction with glycine esters, is attributed to the α-coordinating ability of the chlorine atom with the lithium of the incoming enolate as depicted in transition state TS-6b. The coordinating α-chloro atom in TS-6b overrides the chelation of the sulfinyl oxygen (e.g., TS-6a) and allows the sulfinylimine to react in the conformation wherein the S=O bond and the lone pair of electrons on the nitrogen atom are antiperiplanar [36]. This reversal of stereoselectivity is analogous to results obtained with other N-p-toluenesulfinylimines containing an oxygen atom as α-coordinating group [37-39]. The resulting syn-addition products syn-5 were subsequently cyclized to the corresponding N-sulfinyl-β,γ-aziridino-α-aminocarboxylamides 8 upon treatment with K2CO3 in acetone under reflux in a moderate to very good yield (36–90%, Scheme 4).

The conversion of the ring-closure reaction was always complete as determined by TLC analysis, but purification of these N-sulfinyl-β,γ-aziridino-α-aminocarboxylamides 8 by flash chromatography resulted in a considerable loss of product.

In order to extend the potential applicability of the synthesized N-sulfinyl-β,γ-aziridino-α-aminocarboxylamides 8 as building blocks in biomedicinal chemistry, some attempts were made to remove the N-protective groups of diaminocarboxylamides 8 under mild acidic conditions (Scheme 4). In analogy with our recently published results on the corresponding aziridino esters [20], amide 8b was treated with 5 equiv of trifluoroacetic acid in acetone/water (2:1) at rt for 15 min. After a basic workup with NH4OH, it was concluded that the conversion towards the N-deprotected syn-β,γ-aziridino-α-aminocarboxylamide 9b was complete based on 1H NMR and LC–MS analysis of the crude reaction mixture. Unfortunately, all attempted purification techniques (column chromatography, preparative TLC, acid-base extraction) to remove benzophenone and some other minor impurities from the crude reaction mixture, failed to provide the pure N-deprotected syn-β,γ-aziridino-α-aminocarboxylamide 9b.

Alternatively, the deprotection of the α-amino functionality of the synthesized syn-γ-chloro-α,β-diaminocarboxylamides syn-5 was investigated en route towards the development of potential DPP inhibitors [7-9]. The syn-γ-chloro-α,β-diaminocarboxylamides syn-5 were treated with 5 equiv of trifluoroacetic acid in acetone/water (2:1) for 15 min (Scheme 5).

After a basic workup with NH4OH, the α-deprotected syn-γ-chloro-α,β-diaminocarboxylamides 10 could be purified by crystallization or preparative TLC (21–91% yield). The obtained result was in accordance with the earlier reported selective deprotection of a benzophenone imine functionality, in the presence of an N-p-toluenesulfinyl moiety, of diamino esters with H3PO4/H2O/THF [17,40].

In conclusion, it was demonstrated that new chiral syn-γ-chloro-α,β-diaminocarboxylamides are formed in acceptable to good yields and with excellent diastereomeric ratios by stereoselective Mannich-type reactions of N-(diphenylmethylene)glycinamides across chiral α-chloro-N-p-toluenesulfinylaldimines. Notably, a very high syn-diastereoselectivity was obtained in the synthesis of the (SS,2S,3S)-γ-chloro-α,β-diaminocarboxylamides with the opposite enantiotopic face selectivity as compared to the Mannich-type additions of N-(diphenylmethylene)glycine esters across chiral α-chloro-N-p-toluenesulfinylaldimines. The synthesized γ-chloro-α,β-diaminocarboxylamides were selectively deprotected under acidic conditions, and the resulting α,β-diaminoacylpyrrolidines and -piperidines have a potential applicability as dipeptidyl peptidase inhibitors, which is currently under investigation.

The authors are indebted to the “Institute for the Promotion of Innovation through Science and Technology, Flanders” (IWT-Vlaanderen) and the Research Foundation, Flanders (FWO) for financial support.

The use of 4,4,4-trifluorothreonine to stabilize extended peptide structures and mimic β-strands

© 2012 Callebaut et al; licensee Beilstein-Institut.
This is an Open Access article under the terms of the Creative Commons Attribution License (http://creativecommons.org/licenses/by/2.0), which permits unrestricted use, distribution, and reproduction in any medium, provided the original work is properly cited.
The license is subject to the Beilstein Journal of Organic Chemistry terms and conditions: (http://www.beilstein-journals.org/bjoc) 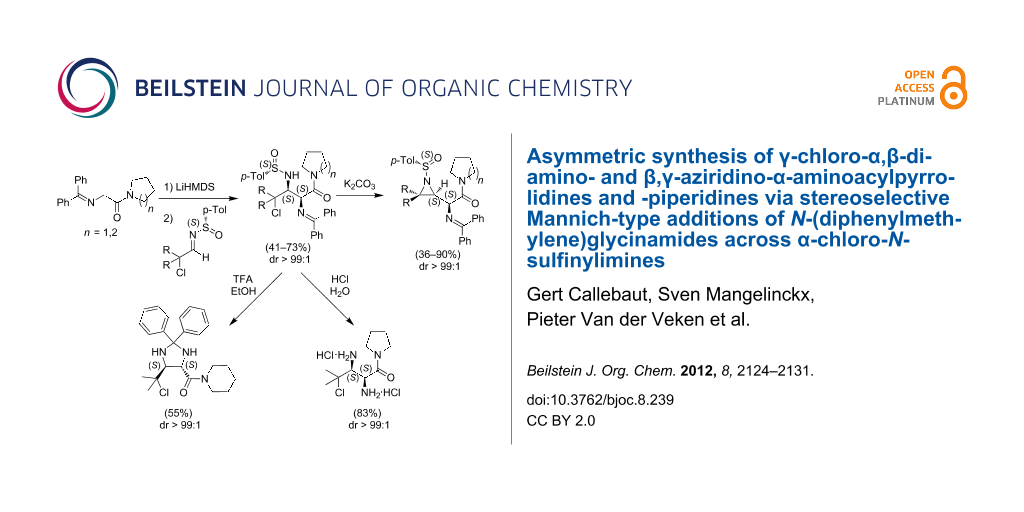