All articles from this author
Misato Kishi


All articles from this author
Takashi Ishihara

Treatment of readily prepared (Z)-6-benzyloxy-1,1,1,2-tetrafluoro-6-methyl-2-hepten-4-yne with 1.5 equiv of LHMDS in −78 °C for 1 h gave the corresponding trifluoromethylated diyne in an excellent yield. This diyne was found to be a good substrate for the carbocupration with various higher-ordered cyanocuprates to give the corresponding vinylcuprates in a highly regio- and stereoselective manner. The in situ generated vinylcuprates could react very smoothly with an excess amount of iodine, the vinyl iodides being obtained in high yields. Thus-obtained iodides underwent a very smooth Sonogashira cross-coupling reaction to afford various trans-enediynes in high yields.

trans-Enediynes (trans-hex-3-ene-1,5-diynes), as shown in Figure 1, are well-recognized as one of the most important building blocks because they are frequently utilized for the synthesis of π-conjugated polymers, which have attracted much attention in the fields of electronic and photonic materials science [1-3].

While numerous synthetic approaches to non-fluorinated trans-enediynes have been reported so far, there has been quite a limited number studies on the preparation of fluoroalkylated trans-enediynes [4-7], although the introduction of fluorine atom(s) into organic molecules very often changes their physical as well as chemical characteristics significantly, resulting in the discovery of new materials with unique physical properties [8-14].

Our initial studies began with the preparation of trifluoromethylated diyne derivatives [15-22]. Thus, treatment of 2,3,3,3-tetrafluoro-1-iodo-1-propene (1), which could be easily prepared from 2,2,3,3,3-pentafluoropropanol in three steps [23], with 1.2 equiv of terminal alkynes 2 and 1.5 equiv of Et3N in the presence of 5 mol % of Pd(OAc)2 and 10 mol % each of PPh3 and CuI in DMF at room temperature for 24 h, gave the corresponding Sonogashira cross-coupling products 3a–e in good to high yields [24-26] (Scheme 2).

Subsequently, 3a was subjected to the usual β-elimination conditions according to the literature [23,27-29], i.e., treatment of 3a with 1.5 equiv of potassium tert-butoxide (t-BuOK) in THF at room temperature for 2 h. Very surprisingly, the desired trifluoromethylated diyne 4a was not detected at all and the addition–elimination product 5a was obtained quantitatively. Therefore, we examined the reaction conditions for the β-elimination of 3a in detail (Table 1). As shown in Table 1, entries 2 and 3, the reactions with t-BuOK in various solvents, such as 1,4-dioxane and ether, were found to be fruitless, leading to a quantitative formation of 5a. Changing the base from t-BuOK to KOH brought about better results (Table 1, entries 4–6). Thus, the reaction with 1.5 equiv of KOH at the reflux temperature of THF produced the desired diyne 4a in ca. 10%, while no desired product was given at room temperature. On the other hand, a dramatic change could be observed when the amide bases were used. The use of lithium diisopropylamide (LDA) in THF at −78 °C for 2 h resulted in a significant increase of the yield from 10% to 46% (Table 1, entry 7). Switching LDA into lithium hexamethyldisilazide (LHMDS) led to a further improvement of the yield (Table 1, entry 8). Finally, the best yield was obtained when the reaction was carried out in THF at −78 °C for 1 h by using LHMDS. In this case the desired diyne 4a was generated in 74% 19F NMR yield as a sole product. Unfortunately, 4a was found to be somewhat thermally unstable, and a partial decomposition was observed in silica-gel column chromatography, 4a being isolated in very low yield. Additionally, such a partial decomposition of 4a was also observed even when 4a was kept in a freezer.

With the thus-obtained optimum reaction conditions, we next investigated the β-elimination reaction of various enynes as described in Table 2. As shown in Table 2, entry 2, changing a phenyl group into an anisyl group in R1 resulted in a significant increase of the yield from 74% to a quantitative yield. In this case, it was found that 4b was slightly thermally stable, compared to 4a, while it could not be isolated in a pure form. In the case of the enyne having an n-C6H13 group as R1, on the other hand, the starting material was not completely consumed, and an inseparable mixture of the desired diyne 4c and the enyne 3c was given (Table 2, entry 3). In addition, the reaction proceeded very sluggishly in the enyne having CH2OBn as R1, and neither 3d nor 4d could be obtained in high yields (Table 2, entry 4). Interestingly, the enyne 3e having a CMe2OBn group as R1 was found to be a good substrate, the desired diyne 4e being obtained quantitatively (Table 2, entry 5). Additionally, 4e was so thermally stable that it could be obtained in 95% isolated yield after the silica-gel column chromatography.

aDetermined by 19F NMR. Value in parentheses is of isolated yield. bCarried out for 24 h.

With the substrate 4e in hand, our interest was next directed toward the carbocupration reaction of 4e. First of all, we attempted the investigation of the reaction conditions for the carbocupration reaction of 4e, as described in Table 3. Thus, treatment of 4e with 1.2 equiv of higher-ordered cyanocuprate (n-Bu)2CuLi·LiCN, which was prepared from CuCN and 2 equiv of n-BuLi, at −78 °C for 2 h, followed by quenching the reaction with saturated aqueous NH4Cl, gave the corresponding carbocupration product 5 in 46% yield as a sole product (it is well known that the carbocupration reaction of fluoroalkylated alkynes with cuprates proceeds in a highly cis-selective manner [30,31]), together with a slight recovery of the starting material (Table 3, entry 1). In this case, the reaction proceeded in a highly regio- and stereoselective manner and the other isomers 6–12 were not detected at all (Figure 2). It was especially noteworthy that only the triple bond possessing a CF3 group, not the triple bond having a CMe2OBn group, was subjected to the carbocupration reaction. As shown in Table 3, entry 2, raising the reaction temperature from −78 to −45 °C led to a significant increase in the yield. We also examined the reaction with the cuprate prepared from Grignard reagent, n-BuMgBr. As summarised in Table 3, entries 3–5, a significant decrease of the yield was observed when the reaction was performed by using 1.2 equiv of cuprate. Very interestingly, the use of 1.5 equiv of the higher-ordered cyanocuprate realized the most satisfactory result, the desired product being obtained in 85% yield, though the yield was somewhat eroded in the reaction for 2 h.

With the optimum reaction conditions in hand, we next investigated the carbocupration reaction by using various copper reagents. In all cases, iodine was employed as an electrophile instead of aqueous NH4Cl. The results are summarised in Table 4. As shown in Table 4, entries 1 and 2, (n-Bu)2CuLi·LiCN and Me2CuLi·LiCN could participate in the reaction to give the corresponding iodide 13a,b in good yields. Furthermore, the cuprates prepared from alkyl Grignard reagents, such as n-Bu, Me, and cyclohexylmagnesium bromide, reacted smoothly (Table 4, entries 3–5). Switching the cuprate from dialkylcuprate into diarylcuprate did not bring about any influence on the yields at all (Table 4, entries 6 and 7).

A proposed reaction mechanism is outlined in Scheme 3. Based on the accumulated studies on the chemistry of fluoroalkylated alkynes, it appears possible that the copper reagent coordinates to the triple bond proximate to the CF3 group (Int-A), rather than the alternative one (Int-B), due to high reactivity of the fluoroalkylated alkyne. Then, CuI adds oxidatively to the alkyne to form the intermediate Int-C, not Int-D. Since a CF3 group has a very strong electron-withdrawing ability, the CF3Cα—CuIII bond may be stronger than CuIII—Cβ. (In the hydrometalation and the carbometalation reaction of fluoroalkylated alkynes, the same regioselectivity was observed [32-35].) Accordingly, a transfer of the R2 group on CuIII to the olefinic carbon distal to a CF3 group may take place preferably, with vinylcopper intermediate Int-E, not Int-F, being produced exclusively. As a result, vinyl iodide 13 can be given in a highly regio- and stereoselective manner.

Finally, we attempted the Sonogashira cross-coupling reaction of the obtained iodide 13a (Scheme 4). Thus, treatment of 13a with 1.2 equiv of terminal alkynes and 40 equiv of Et3N in the presence of 10 mol % each of Pd(PPh3)4 and CuI in THF at 70 °C for 2–5 h gave the corresponding enediynes 14a–c in high to excellent yields. In all cases, other stereoisomers were not detected at all and 14a–c were generated as the sole products in a pure form.

In summary, we have established a convenient as well as efficient access to the trifluoromethylated diyne by Sonogashira cross-coupling reaction of readily accessible 2,3,3,3-tetrafluoro-1-iodo-1-propene (1) and the following HF elimination reaction. The thus-obtained CF3-enediyne could participate in the carbocupration with various higher-ordered cyanocuprates very well to give the corresponding vinyliodides in good yields. Finally, the thus-obtained iodide underwent a smooth Sonogashira cross-coupling reaction to afford the various desired trans-enediyne derivatives in high yields.

© 2012 Konno et al; licensee Beilstein-Institut.
This is an Open Access article under the terms of the Creative Commons Attribution License (http://creativecommons.org/licenses/by/2.0), which permits unrestricted use, distribution, and reproduction in any medium, provided the original work is properly cited.
The license is subject to the Beilstein Journal of Organic Chemistry terms and conditions: (http://www.beilstein-journals.org/bjoc) 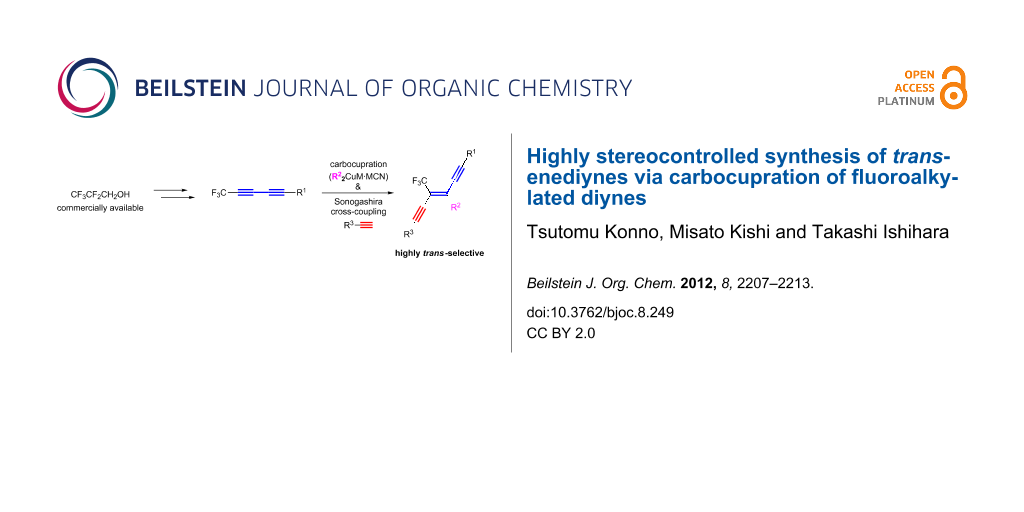