An aniline dication-like transition state in the Bamberger rearrangement


All articles from this author
Guixiang Zeng


All articles from this author
Wei Guan


All articles from this author
Shigeyoshi Sakaki

A Bamberger rearrangement of N-phenylhydroxylamine, Ph–N(OH)H, to p-aminophenol was investigated by DFT calculations for the first time. The nitrenium ion, C6H5–NH+, suggested and seemingly established as an intermediate was calculated to be absent owing to the high nucleophilicity of the water cluster around it. First, a reaction of the monoprotonated system, Ph–N(OH)H + H3O+(H2O)n (n = 4 and 14) was examined. However, the rate-determining transition states involving proton transfers were calculated to have much larger activation energies than the experimental one. Second, a reaction of the diprotonated system, Ph–N(OH)H + (H3O+)2(H2O)13, was traced. An activation energy similar to the experimental one was obtained. A new mechanism of the rearrangement including the aniline dication-like transition state was proposed.

The fundamental Bamberger rearrangement is defined in Scheme 1 [1,2].

In the aqueous sulfuric acid, 4-aminophenol was afforded exclusively by the rearrangement. On the other hand, the 2- and 4-chloro-amino derivatives were afforded when hydrochloric acid was used. In spite of the classic and well-known reaction, the mechanism of the Bamberger rearrangement is still unclear. Heller et al. suggested that an SN1 mechanism is more likely, but the SN2 one cannot be ruled out [3]. The reaction was proven to occur via the intermolecular rearrangement by the 18O exchange in Scheme 2 [4].

The intermolecular nature was also proven by a rearrangement of N-ethyl-N-phenylhydroxylamine, Et–N(OH)–Ph 3, in methanol leading to p-(ethylamino)anisole 4 (Scheme 3) [5].

Through the kinetic measurement, the rearrangement was claimed to occur by an SN1 mechanism [6]. Also, it was reported that the elimination of water from Ar–N+H2OH is rate determining and a diprotonated species, Ar–N+H2OH2+, contributes significantly to the observed reaction rate at the acid-catalyst concentration [H2SO4] > 0.50 mol/L. The activation energy of the rearrangement in Scheme 1 was measured to be 24.8 kcal/mol. The SN1 mechanism suggested by Heller et al. [3] involves a nitrenium ion 7 as shown in Scheme 4.

In Scheme 4, a water molecule is taken off from the O-protonated form 6, which leads to the nitrenium ion 7. To the para position of the ion H2O is added, and the subsequent proton removal and attack give the product 2H+. While the N-protonated species 5 appears to be more favorable than the O-protonated one 6, the former has been regarded as not being an intermediate for the reaction progress. While the mechanism in Scheme 4 appears to be established, there is a significant question as to "…why in some cases, for example where the nucleophile is water, only the 4-isomer product is formed from phenylhydroxylamine, whereas in other cases, e.g., when chloride ion is present, both 2- and 4-chloro isomers are formed" [7]. This is a natural question in light of the ortho–para orientation onto the cationic phenyl ring.

So far, there have been no theoretical studies of the rearrangement, and in this study DFT calculations were carried out to address the following three unsolved issues:

(a) Is the nitrenium ion 7 a plausible intermediate?

(b) How does the N-protonated species (5 in Scheme 4) participate in the rearrangement? The reverse route (5 → 1 + H+ needed for the reaction progress) seems to be unlikely.

(c) Why is the para-product afforded exclusively in the H2SO4 aqueous media?

It will be shown that the size of the hydrogen-bond network of water clusters in the diprotonated system controls the reactivity of the rearrangement.

The reacting systems were investigated by density functional theory (DFT) calculations. The B3LYP [8,9] method was used to trace the reaction path. The basis sets employed were 6-31G(d) and 6-311+G(d,p), where the latter was adopted for the key (OH transfer) steps. For the Cl-containing model, 6-31(+)G(d) was used where the diffuse sp function is only the chlorine atom.

Transition states (TSs) were sought first by partial optimizations at bond-interchange regions. Second, by the use of Hessian matrices, TS geometries were optimized. They were characterized by vibrational analyses, which checked whether the obtained geometries have single imaginary frequencies (ν≠s). From TSs, reaction paths were traced by the intrinsic reaction coordinate (IRC) method [10,11] to obtain the energy-minimized geometries.

All the calculations were carried out by using the Gaussian 09 [15] program package. The computations were performed at the Research Center for Computational Science, Okazaki, Japan.

First, the possibility of the nitrenium intermediate 7 was examined by the use of a model of 7 + (H2O)18. Figure S1, Supporting Information File 1 exhibits the assumed initial geometry (a) and B3LYP/6-31G(d) and B3LYP/6-311+G(d,p) optimized ones (b).

By both computational methods, the nitrenium ion disappeared, and the 7 + (H2O)18 model was converted to a geometry of o-OH imine and H3O+(H2O)16. The nitrenium ion was calculated to be inevitably subject to the nucleophilic attack of OH2. This attack proceeds energetically downhill without the transition state, and the nitrenium ion was absent. Thus, there should be a mechanism other than that in Scheme 4. Second, a reaction model (Scheme 5) involving proton transfers was investigated.

In the scheme, the N-protonated form Int1 (i.e., 5 in Scheme 4) undergoes the transfer via the water dimer (or trimer) at TS2. The transfer pattern is drawn for the rearrangement to the para position (apparently, a [1,5]-OH shift); that to the ortho one would be a [1,3]-OH shift. Figure S2, Supporting Information File 1 shows the three obtained TS2 geometries. Their presence demonstrates that paths involving [1,5]- and [1,3]-shifts with more water molecules than those in Figure S2 should be examined on an equal footing. Figure S3, Supporting Information File 1 shows the path calculated by a model, called here model(I), composed of Ph–NH(OH) and H3O+(H2O)4.

Figure 3 shows the energy change of the reaction in Figure 1. The reaction was calculated to be very exothermic (= −40.70 kcal/mol at Product(II)). However, the activation energies of the three TS2s, +38.59, +37.48 and +43.13 kcal/mol, of the high-energy steps are much larger than the experimental one, +24.8 kcal/mol [6]. Also, the three activation energies of model I in the broken box are large, +34.14, +35.83 and 37.09 kcal/mol. Thus, although reasonable geometric changes were obtained in Figure 1, these large energies demonstrate that the monoprotonated reaction is unlikely.

The large activation energies of TS2s in the monoprotonated systems would arise from the poor proton-donating strength to the oxygen of the N–O bond in the model of Scheme 5. In order to enhance the donation, a dication system was constructed at the left of Scheme 6. However, the bond-interchange transition state could not be obtained in spite of many attempts. Attempts including more water molecules also failed. An alternative model was considered and is shown in Scheme 7. This model was constructed in light of the results of preliminary calculations shown in Figure S4 and Figure S5, Supporting Information File 1.

Figure S4a shows that a TS geometry was successfully obtained in a model in which one H2O molecule is subtracted from that in Scheme 7. However, when the size of the water cluster is enlarged, the TS structure cannot be obtained, as shown in Figure S4b. On the other hand, a TS geometry following Scheme 7 could be obtained as shown in Figure S5, Supporting Information File 1. These results demonstrate that not H3O+(H2O) (in Figure S4) but H3O+(H2O)2 (in Figure S5) should participate in the reaction center.

Figure 5 shows the energy change of the reaction in Figure 4. The rate-determining step is TS2, and TS2(III,[1,3]-shift) = +32.20 kcal/mol is much larger than TS2(III) = +26.25 kcal/mol. The latter value is close to the experimental one, +24.8 kcal/mol [6], and the superiority of the [1,5]-OH shift over the [1,3]-OH one is clearly indicated. Thus, the dication system may be subject to the Bamberger rearrangement in the para-orientation, which is in line with the experimental suggestion [6].

The monoprotonated reacting system with Cl−

In the Introduction, the experimental result that the rearrangement gave the 2- and 4-chloro-amino derivatives in hydrochloric acid was cited [1]. The nucleophile Cl− would be free from the hydrogen-bond constraint depicted in Scheme 7. Then, such less sterically congested trans substitution as that shown in Scheme 6 becomes feasible. By the use of a model (called here model V) of Ph–NH(OH) + (H3O+)2(H2O)13 + Cl−, the trans-type substitution paths were traced. In fact, TS2(V) and TS2(V, [1,3]-shift) geometries were obtained and are shown in Figure 7. Their activation energies were calculated to be +28.52 kca/mol and +29.57 kcal/mol relative to the energy of Int1(V), respectively. These similar values indicate that both 2- and 4-Cl-substituted anilines may be formed almost equally according to the normal ortho- and para-orientation.

In this work, the Bamberger rearrangement was studied by means of DFT calculations. In the Introduction, three questions (a), (b), and (c) were raised:

On the basis of the calculated results, Scheme 4 may be revised to Scheme 8.

A computational study of base-catalyzed reactions of cyclic 1,2-diones: cyclobutane-1,2-dione

© 2013 Yamabe et al; licensee Beilstein-Institut.
This is an Open Access article under the terms of the Creative Commons Attribution License (http://creativecommons.org/licenses/by/2.0), which permits unrestricted use, distribution, and reproduction in any medium, provided the original work is properly cited.
The license is subject to the Beilstein Journal of Organic Chemistry terms and conditions: (http://www.beilstein-journals.org/bjoc) 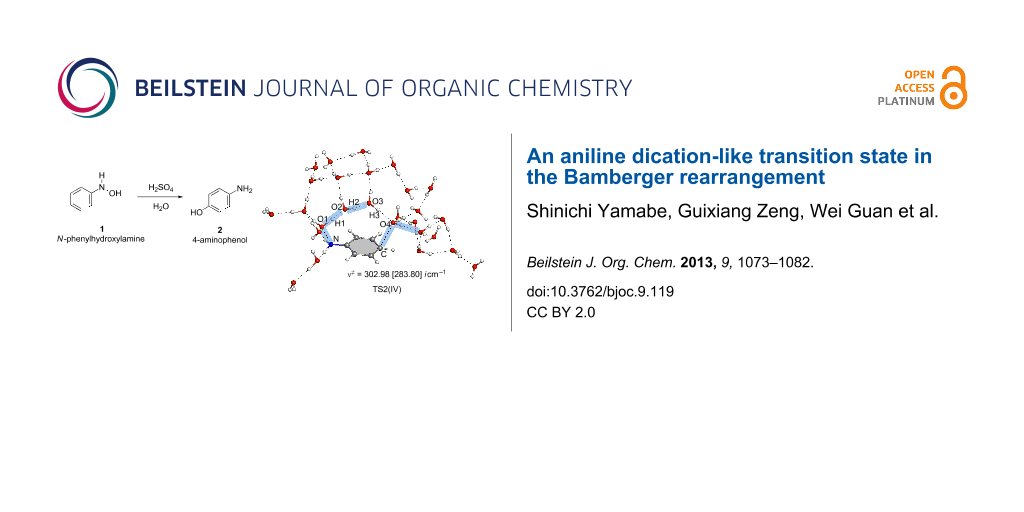