All articles from this author
Shin-ichi Kawaguchi


All articles from this author
Takashi Ohe


All articles from this author
Akiya Ogawa

A number of organoselenium compounds are known to be biologically active [1-4]. In particular, diaryl selenides are known to have antioxidative effects [5]. Therefore, many studies on the synthetic methods for unsymmetrical diaryl selenides have recently been reported [6-32]. Most of these methods use coupling reactions catalyzed by transition-metal complexes. To avoid the contamination of product selenides with transition-metals, the development of synthetic methods for unsymmetrical diaryl selenides in the absence of transition-metal catalysts is desirable. On the other hand, triarylbismuthines are gaining interest as useful arylation reagents, because organobismuth compounds are nontoxic and have excellent reactivity, which has led to several applications in organic synthesis [33]. Therefore, numerous transition-metal-catalyzed coupling reactions with organobismuth compounds have been reported [34-53]. Although triphenylbismuthine can generate a phenyl radical [33,54] in the absence of a radical initiator simply by photoirradiation, few arylation reactions using this mechanism have been reported [55,56]. We presume that a phenyl radical generated from triphenylbismuthine can be captured by organic diselenides, which have a high carbon-radical-capturing ability [57-64] and as a result, diaryl selenide will be generated (Scheme 1). In 1999, Barton and co-workers reported that diaryl selenide was obtained by the reaction of triarylbismuthine with diphenyl diselenide under heating at high temperature (140 °C) [65], but the photoinduced reaction was not investigated. In this letter, we will report the radical reaction of diaryl diselenides with triarylbismuthines from the viewpoint of a photoinduced reaction in the synthesis of unsymmetrical diaryl selenides.

= 9 mm) with CHCl3 (4 mL), and the mixture was irradiated by a xenon lamp for 5 h at room temperature. As a result, 0.042 mmol (21% yield based on the amount of selenium atoms) of diphenyl selenide (3aa) was obtained after the isolation by silica gel chromatography (the yield was determined by HPLC). Next, optimization of the reaction conditions was investigated as shown in Table 1. Irradiation by a tungsten lamp instead of a xenon lamp did not induce the desired arylation reaction (Table 1, entry 2), and in the dark, the reaction did not proceed at all (Table 1, entry 3). When 2,2′-azobis(isobutyronitrile) (AIBN) was used as a radical initiator, the desired reaction proceeded ineffectively (Table 1, entry 4). Among several solvents, such as benzene, DMSO and CH3CN, the use of CH3CN improved the yield of 3aa (Table 1, entries 5–7). Although the solubility of 2a is different depending on the solvent, the yield of 3aa is not correlated with the solubility of 2a. It may be more important to choose a solvent that does not react with the generated aryl radical. Moreover, a lower amount of solvent and the utilization of a quartz test tube (

aThe yields were determined by HPLC.

To get information about the reaction pathway of this arylation, we first investigated the arylation of diphenyl diselenide by varying the 1a/2a molar ratio (Table 3). When excess amounts of either starting substrate were employed, the yields of 3aa increased (Table 3, entries 1, 2 and 5).

Additionally, air is entrained in the reaction system, since a test tube with a septum was used in which a needle was inserted. When the reaction of diaryl diselenide with triarylbismuthine was conducted with a strictly sealed tube in Ar atmosphere, a bismuth mirror was observed and the yield of 3aa decreased. We assume that the reaction proceeds with bismuth residue getting oxidized.

A plausible reaction pathway for the photoinduced reaction of diaryl diselenide with triarylbismuthine is shown in Scheme 3. First, an aryl radical is generated from triarylbismuthine by near-UV light irradiation [33,54,55]. The generated aryl radical is captured by diaryl diselenide to produce diaryl selenide and a seleno radical. The seleno radical may dimerize to re-form diselenide. Diphenyl diselenide has its absorption maximum (λmax) at 340 nm (ε = 103) [66] and accordingly, the seleno radical could be produced by the irradiation with a tungsten lamp. However, the irradiation by a tungsten lamp instead of a xenon lamp did not result in the desired reaction (Table 1, entry 3). This fact strongly suggests that the formation of a phenylseleno radical is not important for the formation of diphenyl selenide. Conceivably, when the reaction proceeds, a phenyl radical may be formed directly from triphenylbismuthine upon photoirradiation. Moreover, the use of an excess amount of 1, which has a relatively high carbon-radical-capturing ability, increased the yield of 3, and the use of diphenyl disulfide (4), which has a lower carbon-radical-capturing ability than diselenide, decreased the yield of 5. (The exact capturing abilities of diselenide and disulfide toward the phenyl radical are not known, but they have been reported toward vinyl radicals, where diselenide has a higher capturing ability than disulfide: kSe/kS = 160 [57-59].) These facts also support that the reaction starts from the generation of an aryl radical. On the other hand, a pale yellow solid, insoluble in organic solvents, was obtained as a byproduct after the reaction. We assume that this solid is a bismuth residue, which can consist of bismuth oxides and/or bismuth selenides. Moreover, it may form biaryls (Ar–Ar) as byproducts, but no biaryl was observed after the reaction.

We have found that the photoinduced reaction of diaryl diselenides with triarylbismuthines affords unsymmetrical diaryl selenides in good yields. This method is efficient, because two arylseleno groups from diaryl selenides can be used as a selenium source, and its advantage is that the reaction proceeds in the absence of transition-metal catalysts.

Compounds 1a, 2a, 3aa, 4, and 5 were obtained from commercially available materials. Diaryl diselenides 1b–e [67] and triarylbismuthines 2b–d [68] were synthesized according to the literature procedures.

This work is supported by a Grant-in-Aid for Scientific Research (C, 23550057) from the Ministry of Education, Culture, Sports, Science and Technology.

Adrián A. Heredia and Alicia B. Peñéñory

© 2013 Kobiki et al; licensee Beilstein-Institut.
This is an Open Access article under the terms of the Creative Commons Attribution License (http://creativecommons.org/licenses/by/2.0), which permits unrestricted use, distribution, and reproduction in any medium, provided the original work is properly cited.
The license is subject to the Beilstein Journal of Organic Chemistry terms and conditions: (http://www.beilstein-journals.org/bjoc) 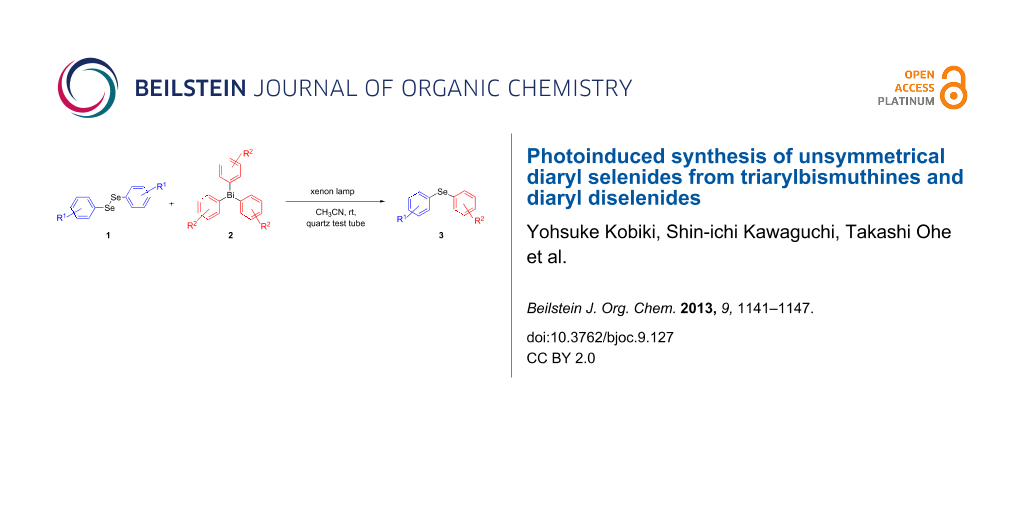