All articles from this author
Ryuta Asada

The limitation of hydroxamate ester as a chiral Lewis acid coordination moiety was first shown in an intermolecular reaction involving a radical addition and sequential allylation processes. Next, the effect of hydroxamate ester was studied in the cascade addition–cyclization–trapping reaction of substrates with a carbon–carbon triple bond as a radical acceptor. When substrates with a methacryloyl moiety and a carbon–carbon triple bond as two polarity-different radical acceptors were employed, the cascade reaction proceeded effectively. A high level of enantioselectivity was also obtained by a proper combination of chiral Lewis acid and these substrates.

Strategies involving a cascade process offer the advantage of multiple carbon–carbon and/or carbon–heteroatom bond formations in a single operation. Radical chemistry has been developed as one of the most powerful tools for carbon–carbon bond formation in organic synthesis [1-20]. Particularly, the advantages for utilizing the radical methodologies are the high functional group tolerance and the mild reaction conditions, because radical intermediates are not charged species. Therefore, a number of extensive investigations into sequential radical reactions have been reported over the past fifteen years and significant progress has been made in recent years [21-36]. We have also directed our efforts toward the development of new and efficient cascade approaches for the construction of carbon–carbon/heteroatom bonds based on radical chemistry. These approaches can be classified into two categories according to their reaction mechanism (Figure 1) [37-43].

Enantioselective radical reactions have been intensively studied over the past fifteen years. Compared with stereocontrol studies on intermolecular radical reactions, the enantioselective stereocontrol in radical cyclizations still remains a major challenge [44-68]. We have also investigated a new type of chiral Lewis acid mediated cyclization approach for cascade bond-forming reactions via sequential radical–radical processes (Figure 2) [39-43]. In these studies, the control of the enantioselectivities was achieved by the introduction of a hydroxamate ester as a two-point-binding coordination tether into the middle of substrates A, together with the control of the rotamer population of substrates [39,42]. In this paper, we describe in detail the cascade addition–cyclization–trapping reaction of substrates with a carbon–carbon triple bond as a radical acceptor as well as the effect of hydroxamate ester as a Lewis acid coordination moiety. Some results have been reported in our preliminary communication [39].

Renaud’s group showed in 2002 that hydroxamic acid derivatives are useful achiral templates in enantioselective Diels–Alder reactions [69,70]. To study the effect of hydroxamate ester as an achiral template in the intermolecular radical reaction, our experiments began with the investigation of cascade radical addition–allylation of hydroxamate esters 3A–C having an acryloyl moiety (Scheme 1). The reactions were evaluated in CH2Cl2 at −78 °C by employing isopropyl iodide, allyltin reagent, and Et3B as a radical initiator. The enantiomeric purities of products were checked by chiral HPLC analysis. The effect of the substituents R1 and R2 of hydroxamate esters 3A–C on yield and selectivity was evaluated in the presence of a chiral Lewis acid prepared from box ligand L1 and Zn(OTf)2. The results are shown in Scheme 1. Although good enantioselectivities were not observed, the size of the substituents had an impact on enantioselectivity with the larger group leading to lower ee. These observations indicate that the formation of the rigid ternary complex of hydroxamate ester, Zn(OTf)2 and the ligand L1 is required for enantioselective transformation. A similar trend was observed in our studies on the addition–cyclization–trapping reaction of hydroxamate esters [39,42]. The chiral Lewis acid promoted the reaction of substrate 3A having a bulky 2-naphthylmethyl group as substituent R2 to form the product 4A in 40% yield with 7% ee. Moderate enantioselectivity was observed by employing the substrate 3B having a benzyl group as R1 and a methyl group as R2. Particularly, the steric factor of the fluxional substituent R1 affected not only enantioselectivity but also the chemical efficiency. The use of 3C having a 2-naphthylmethyl group as R1 led to a decrease in the chemical yield, probably because of the steric repulsion by a bulky substituent R1 leading to the dissociation of the chiral Lewis acid. In these studies, the absolute configuration at newly generated stereocenters has been not determined.

We recently reported in detail the cascade addition–cyclization–trapping reaction of substrates with carbon–carbon double bonds as two kinds of polarity-different radical acceptors [42]. On the basis of these results, the possibility of the carbon–carbon triple bond as a radical acceptor and the hydroxamate ester functionality as a two-point-binding coordination tether was next studied in detail. To understand the scope and limitation of the cascade transformation of hydroxamate esters with carbon–carbon triple bonds, the substrates of choice were 5, 6A–C, 7 and 8 having hydroxamate ester functionality (Figure 3).

At first, we studied the cascade reaction of 5 with an acryloyl moiety and 6A–C with a methacryloyl moiety as an electron-deficient acceptor in the absence of a chiral ligand (Scheme 2). To control the rotamer population of substrates, Zn(OTf)2 was used as a Lewis acid to coordinate the hydroxamate ester functionality. The reactions were evaluated in CH2Cl2 at 20 °C under the tin-free iodine atom transfer conditions by using isopropyl iodide and Et3B. The reaction of hydroxamate ester 5 did not give the desired product probably due to polymerization of 5 through the labile acrylamide moiety. In contrast, the reaction of 6A–C proceeded effectively to give the cyclic products 9Aa–9Ca in good yields. Among them, hydroxamate esters 6A and 6B, which have a small methyl or benzyl group as R1, have shown a high reactivity, although a 76% yield of product 9Ca was obtained even when hydroxamate ester 6C having a 2-naphthylmethyl group was used. Furthermore, the regiochemical course of the initial radical addition to 6A–C was well controlled. The nucleophilic isopropyl radical reacted selectively with the electron-deficient methacryloyl moiety to give the single isomers 9Aa–9Ca.

It is also important to note that Z-isomers 9Aa–9Ca were selectively obtained without the formation of corresponding E-isomers. The E,Z-selectivities are determined by capturing the intermediate vinyl radicals with an atom-transfer reagent such as isopropyl iodide (Figure 4). These selectivities are controlled by the steric factor around vinyl radicals. The vinyl radicals are σ-radicals in a very fast equilibrium between E-isomer B and Z-isomer C. The steric hindrance between the substituents on the α-carbon atom of radical C and isopropyl iodide is assumed to lead to selective iodine atom-transfer in radical B giving 9Aa–9Ca as single Z-isomers.

The absolute configuration at the newly generated stereocenters of 9Aa–Bd was assumed by similarity between the present reaction and the previously reported reaction of substrates having the carbon–carbon double bond [39,42]. In these reactions, a ternary complex of ligand, Lewis acid and substrate would control the three-dimensional arrangement of two radical acceptors. A tetrahedral or cis-octahedral geometry around the zinc center was proposed [71,72]. In Figure 5, a tentative model of an octahedral complex is shown, in which two oxygen atoms of the hydroxamate ester functionality occupy two equatorial positions.

To study the effect of an electron-deficient acceptor on the cascade process, the reactions of propiolic acid derivatives 7 and 8 were tested (Scheme 4). At first, the reaction of 7 was evaluated under asymmetric reaction conditions. However, the cascade addition–cyclization–trapping reaction did not proceed, and the simple adduct 10 was formed in 57% yield by the addition–trapping process. Next, the reaction of propiolic acid derivative 8 was tested, because we expected the [1,5]-hydrogen shift from 1,3-dioxolane ring into the reactive vinyl radical as shown as D. However, the simple adduct 11 was only obtained in 78% yield. The results from these studies show that a carbon–carbon double bond, e.g., a methacryloyl group, of the electron-deficient acceptor is essential for the successful cascade transformation.

To gain further insight into the stereocontrol in the cyclization step, we next studied the opposite regiochemical cyclization by using the substrate 12 via the intermediate radical F (Scheme 5). The reaction was carried out in the presence of Bu3SnH under asymmetric reaction conditions. Although the reaction proceeded even at −78 °C, the nearly racemic product 13 was isolated in 60% yield. This observation indicates that the regiochemical course of the cyclization step is an important factor to achieve the highly asymmetric induction.

We next investigated the reactivity of internal alkynes as electron-rich acceptors (Scheme 6). The internal alkyne 14 has shown a good reactivity comparable to that of the terminal alkynes 6A–C. In the absence of a chiral ligand, the zinc Lewis acid accelerated the reaction of alkyne 14 with an isopropyl radical at 20 °C to give the desired cyclic product 15a in 73% yield. Under analogous reaction conditions, both cyclohexyl iodide and cyclopentyl iodide worked well to give 15b and 15c in 65% and 68% yields, respectively. However, the reaction with a bulky tert-butyl radical did not proceed effectively, probably due to side reactions such as polymerization.

We have shown the cascade radical addition–cyclization–trapping reaction of substrates with a carbon–carbon triple bond as a radical acceptor as well as the scope and limitation of hydroxamate ester as a coordination site with a chiral Lewis acid. Synthetic strategies involving enantioselective radical cyclizations would be desirable tools for preparing functionalized cyclic compounds with multiple stereocenters. These studies offer opportunities for further exploration of fascinating possibilities in the realm of cascade radical reactions.

This work was supported in part by a Grant-in-Aid for Scientific Research (C) (H.M.) from the Ministry of Education, Culture, Sports, Science and Technology of Japan.

© 2013 Miyabe et al; licensee Beilstein-Institut.
This is an Open Access article under the terms of the Creative Commons Attribution License (http://creativecommons.org/licenses/by/2.0), which permits unrestricted use, distribution, and reproduction in any medium, provided the original work is properly cited.
The license is subject to the Beilstein Journal of Organic Chemistry terms and conditions: (http://www.beilstein-journals.org/bjoc) 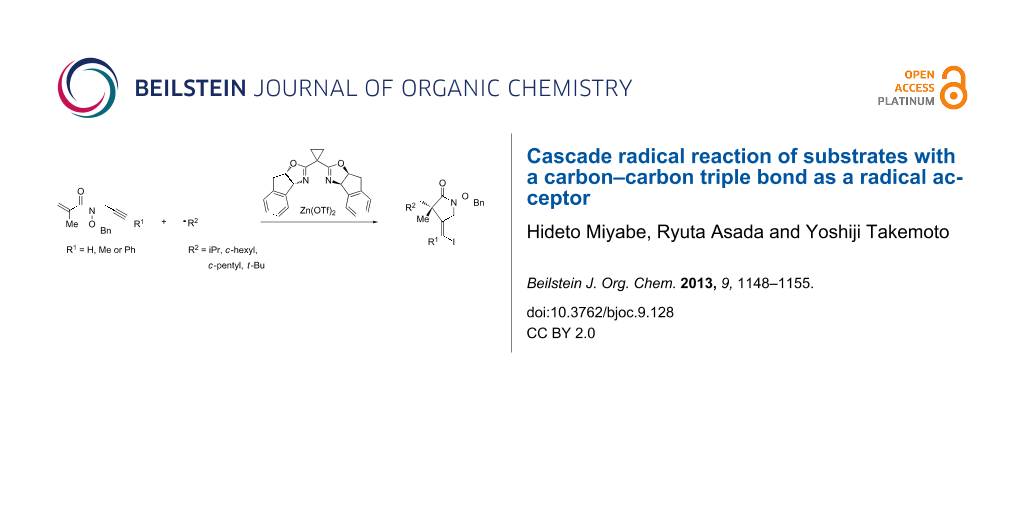