All articles from this author
Zhi-Xiong Ma


All articles from this author
Grant S. Buchanan


All articles from this author
Richard P. Hsung

Throughout the past decade, we have been developing an aza-[3 + 3] annulation reaction as a general and unified strategy in alkaloid synthesis [1-32]. Our aza-[3 + 3] annulation, which has been classified as Type-II [1], with Type-I aza-[3 + 3] annulation being reserved for Robinson’s double Mannich-type process [33], utilizes readily accessible and easily handled vinylogous amides and vinyl iminium salts. It provides a significant complementary, if not superior, approach to aza-[4 + 2] cycloadditions in constructing piperidines, because the aza-dienes and imines required are not always the most accessible and/or easily handled substrates given the problems of isomerization and hydrolysis (Figure 1) [34-37].

The prevalence of six-membered nitrogen heterocyclic motifs in alkaloids renders the development of this aza-[3 + 3] annulation into a powerful strategy a unique opportunity in the field of alkaloid synthesis [1-4,8-15]. The intramolecular variant of this annulation has proven to be particularly valuable for total synthesis [16,26-32]. Specifically, the intramolecular aza-[3 + 3] annulation of vinylogous amides tethered to a vinyl iminium motif 1a proceeds through a tandem sequence of N-1,4-addition and C-1,2-addition/β-elimination [16,17], effectively leading to a variety of nitrogen heterocyclic motifs, such as 3, which are prevalent among alkaloids (Scheme 1) [16,26-32]. However, there was a significant deficiency in this annulation: the inability to employ vinylogous amides tethered to α,β-unsaturated ketones, or enones 1b (R ≠ H) (Scheme 1).

Conceptually, employing enals or enones in an aza-[3 + 3] annulation appears to constitute very little difference, with the major difference lying in the R group in their respective products 3 and 4. While seemingly an insignificant perturbation, the ability to employ enones in aza-[3 + 3] annulations can generate a vast array of opportunities, including the case where R is as small and simple as a Me group, which would already represent a facile entry to aza-phenylene alkaloids [30,31,38-45], such as propyleine [46-48], as well as lycopodium alkaloids that are rich in bioactivities [49-51] (Figure 2). In addition, the importance of these ventures into an aza-[3 + 3] annulation with enones can also be further demonstrated through syntheses of tetrahydroisoquinolines and indole alkaloids [52-55] in which the R group can constitute a larger functionality of the alkaloids, such as that seen in geissoschizine [52-57], and ipecac alkaloids such as protoemetine [48,52-55,58-61], emetine [52-55,58-63], and tubulosine [64]. With the appropriate choice of an R group in the synthetic design, a highly convergent and expedient strategy can come forth for constructing these alkaloids. We report herein our success in achieving intramolecular aza-[3 + 3] annulations of an enone.

To examine the feasibility of an enone intramolecular aza-[3 + 3] annulation, a seven-step synthesis of the annulation substrate 10 commencing from 3-butyn-2-ol (5) was carried out (Scheme 2). Protection of secondary propargyl alcohol 5 as the THP-ether followed by alkylation of a lithium acetylide onto 1,4-dibromobutane afforded bromide 6 in 81% overall yield. Acid-mediated removal of THP followed by azide formation using NaN3 afforded alkyl azide 7 in 94% overall yield.

Preparation of vinylogous amide 9 was then achieved by a two-step sequence: (a) LAH-mediated azide reduction to give a primary amine with concomitant reduction of the alkyne revealing the olefin functionality; and (b) dehydrative condensation of this primary amine with 1,3-cyclohexanedione. Oxidation of the secondary allylic alcohol in 9 with MnO2 at ambient temperature provided enone 10 in 85% yield. We were poised to investigate the viability of the enone aza-[3 + 3] annulation.

Our initial efforts to employ enone substrate 10 met with failure when using up to 500 mol % of piperidinium chloride [65] (Table 1, entry 1) or 100 mol % piperidinium acetate salts (Table 1, entry 2); even at higher temperatures of 120 °C, these chloride and acetate salts proved to be ineffective (Table 1, entry 3). We then explored salts prepared from stronger acids such as (+)-camphorsulfonic acid (CSA) and trifluoroacetic acid, which should tend to dissociate easier in the reaction medium and lead to a more reactive vinyl iminium salt intermediate 1b. We were elated to observe that the use of 100 mol % of piperidinium CSA salt in toluene at 120 °C provided 100% conversion with 60% yield of cycloadduct 11 (Table 1, entry 4). Further optimizations using trifluoroacetate salt (Table 1, entries 5–8) revealed that the yield could be improved to 87%, while lowering the catalyst loading from 500 mol % to 50 mol %, although the reaction temperature was raised to 150 °C. Lastly, we also examined the use of microwave irradiation [66,67] and observed a distinct rate enhancement (Table 1, entry 9).

The observed reactivity difference of the trifluoroacetate and camphorsulfonic acid salts, as compared to the chloride and acetate salts, can be attributed to the rate at which they promote vinyl iminium ion formation through a “balanced act” [12]. The difference in reactivity is related to the dissociation capacity of the respective amine salts. Since both “free amine” and “free acid” are needed in a synergistic manner to generate the vinyl iminium ion from the corresponding enone, the ability of the amine salt to dissociate to its “free amine” and “free acid” can exert an impact on the rate of the iminium formation. The low reactivity of the chloride salt can be attributed to its higher resistance toward dissociation, or is simply a tighter ion-pair compared to the CSA and the trifluoroacetate salt. At the same time, the formation of vinyl iminium ion from carbonyl systems and the “free amine” is also promoted by protonation of the carbonyl group via the “free acid”. Consequently, the increased reactivity of the CSA and trifluoroacetate salt from the acetate salt can be attributed to a higher acidity of the acids.

After establishing the feasibility of the enone version of the intramolecular aza-[3 + 3] annulation we turned our attention to propyleine (12) (see Figure 2 and Scheme 3) as a possible target to showcase the new enone aza-[3 + 3] annulation. Propyleine (12) was isolated in 1972 from Propylaea quatuordecimpunctata in a continued effort by Tursch and co-workers [46,47] in their isolation of the azaphenalene family of defensive alkaloids from various ladybug beetles [38-45]. Mueller and Thompson [48] in 1980 found it interesting that the isomeric enamine named isopropyleine (14) was not reported in the original paper [46,47] taking into account that the isolation conditions involved acid–base extractions. It is conceivable that propyleine (12) and isopropyleine (14) could be interconvertable under acidic conditions via intermediate iminium salt 13.

To investigate this matter, Mueller and Thompson carried out the first and the only synthesis of propyleine known to date [48]. They were able to take a mixture of propyleine and isopropyleine with 1:3 ratio as determined by 1H NMR and watch two sets of proton resonances collapse into one that corresponds to the iminium salt 13 after addition of TFA. This experiment strongly suggested that propyleine (12) and isopropyleine (14) could equilibrate under acidic conditions, thereby implying that the observed ratio of 12 and 14 represents a thermodynamic one in favor of the more stable isopropyleine [48]. With these experimental findings, Mueller and Thompson concluded that the alkaloid isolated by Tursch and co-workers [46,47] was in fact a mixture of readily interconvertable 12 and 14.

We found this controversy in the isolation and total synthesis papers an interesting one that deserves further investigations. Consequently, we performed ab initio calculations on 12 and 14 to gain insight into their relative thermodynamic stability. Models of the most stable conformers and their corresponding energies are shown in Figure 3. To our surprise, propyleine (12) is 2.59 kcal mol−1 more stable than isopropyleine (14), which is the opposite of the Mueller–Thompson postulation [48]. Our calculations suggest that the ratio obtained from the Mueller–Thompson study was likely determined by the kinetics (kB versus kR) in the deprotonation step or the tautormerization process from the iminium salt 13, and not by thermodynamics as originally proposed. Resolving this interesting literature controversy added extra incentive for us to pursue propyleine.

Retrosynthetically, we envisioned propyleine (12) to come from the decarboxylation reaction of vinylogous carbamic acid 15 [10,28], which could be derived from stereoselective hydrogenation of the endocyclic olefin in tricycle 16 (Scheme 4). Vinylogous urethane 16 should be accessible via our intramolecular aza-[3 + 3] annulation of enone 17. Enone 17 could be E or Z with respect to the vinylogous urethane olefin, and cis or trans with respect to the enone double bond. Thus, from the spectroscopic analysis stand point, synthesis of 17 could be messy.

In the forward direction to synthesize 17, we used the approach developed in our model study for the synthesis of precoccinelline, hippodamine and myrrhine alkaloids [30,31]. Specifically, TBDPS-protected 3-butyne-2-ol 18 was converted to bromoalkene 19 in two steps involving alkylation with an excess of dibromopropane and subsequent Lindlar’s hydrogenation (Scheme 5). Grignard addition to the glutarimide Mg-salt 20 followed by reduction of the Mg salt 21 afforded lactam 22 as an inseparable 1:1 mixture of two diastereomers in 77% overall yield [68-70].

Vinylogous amide 23 was prepared by O-methylation of lactam 22 with freshly distilled MeOTf followed by condensation with Meldrum’s acid in the presence of Ni(acac)2. Treatment of 23 with MeONa in MeOH under reflux gave vinylogous urethane 24. It is noteworthy that the geometry of the vinylogous urethane double bond exclusively favored Z, presumably due to the internal hydrogen bonding. Cleavage of the TBDPS group with TBAF provided allylic alcohol 25 in 79% from 23. However, submission of 25 to the standard MnO2 oxidation procedure did not lead to enone 17, with only the starting material being recovered (Table 2). After extensive screening of various oxidation protocols, we succeeded with the Doering–Parikh conditions [71], and the cis geometry of the enone olefin was preserved under these conditions.

With enone 17-cis in hand, we studied its intramolecular aza-[3 + 3] annulation reaction utilizing piperidinium salts (Table 3). When compound 17-cis was treated with the acetate salt in EtOAc at rt, no reaction was observed after 18 h (Table 3, entry 1). Heating this reaction mixture at 85 °C for 12 h only led to slow isomerization of cis-enone 17 to the thermodynamically more stable trans-isomer again with no formation of the desired annulation product 16 (Table 3, entry 2). The inefficiency of the piperidinium acetate salt in the intramolecular aza-[3 + 3] annulation of enones was consistent with our previous findings (see Table 1). We were also not successful in converting enone 17-cis to the desired tricycle 16 using the more reactive trifluoroacetate salt and EtOAc as the solvent. In this case also only isomerization to trans-enone was detected (Table 3, entry 3). Heating this reaction to 130 °C led to eventual decomposition of the starting material (Table 3, entry 4).

However, when enone 17-cis was heated in toluene at 100 °C, complete consumption of starting material was observed after 5 h (Table 3, entry 5). Even though the reaction was relatively messy, the formation of the desired cycloadduct 16 was confirmed by the presence of characteristic signals in the 1H NMR spectra of the crude mixture. Unfortunately, attempts to isolate the annulation product in pure form were not successful, probably due to the high instability of the electron-rich dihydropyridine moiety in 16. Based on our previous experience with precarious annulation products, in situ hydrogenation was then carried out, and we managed to track down ~30% of the desired reduced aza-annulation product 26, although stereoselectivity for the reduction was modest. We ultimately elected not to force our way toward propyleine using the enone aza-[3 + 3] annulation, as we succeeded in total syntheses of other members of the azaphenalene alkaloid family through annulations with enals [30,31]. While it is disappointing that this particular system may have lacked sufficient stability for this to be a suitable synthetic approach, success in an enone version of intramolecular aza-[3 + 3] annulation will allow us to find future applications.

© 2013 Gerasyuto et al; licensee Beilstein-Institut.
This is an Open Access article under the terms of the Creative Commons Attribution License (http://creativecommons.org/licenses/by/2.0), which permits unrestricted use, distribution, and reproduction in any medium, provided the original work is properly cited.
The license is subject to the Beilstein Journal of Organic Chemistry terms and conditions: (http://www.beilstein-journals.org/bjoc) 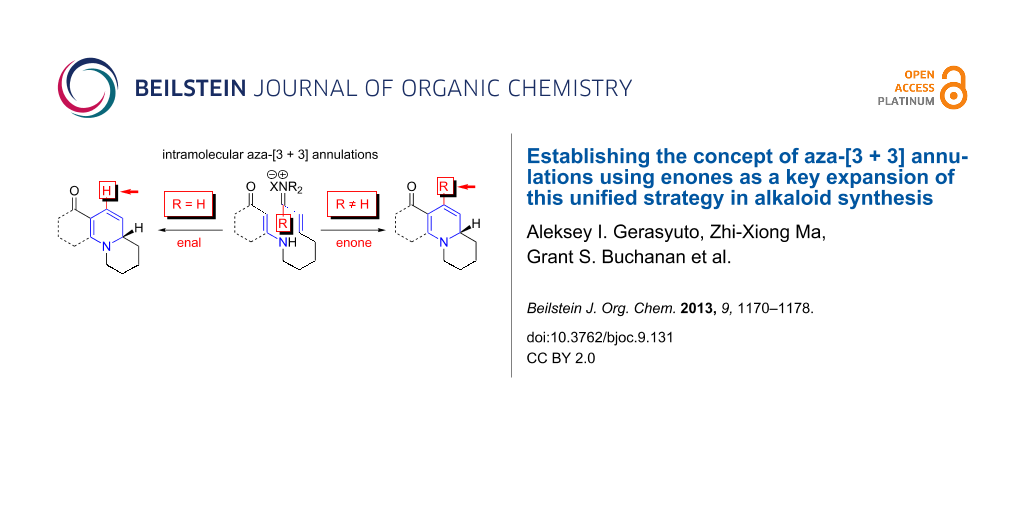