All articles from this author
Shiho Nomura


All articles from this author
Miyuu Tanaka


All articles from this author
Kazuyuki Sato


All articles from this author
Akira Ando

Trifluoromethyl groups are an essential motif in pharmaceuticals, agricultural chemicals, and functional materials because trifluoromethylation of such chemicals often significantly improves their performance [1-6]. To date, the trifluoromethylation of carbonyl compounds [7-10] and aryl halides [11-13] has been extensively explored. On the other hand, the 2,2,2-trifluoroethylation and the 3,3,3-trifluoropropylation, which elongate the product by two and three carbon atoms, respectively, have not been explored yet. 2-Bromo-3,3,3-trifluoropropene [14-26] and 1,1,1,3,3-pentafluoropropane [27,28] have been used in place of (3,3,3-trifluoropropynyl)lithium, which can add to carbonyl compounds and couple with aryl halides through a zinc intermediate. For the 3,3,3-trifluoropropenyl synthon Yamazaki et al. reported the use of 2-(trifluoromethyl)-1-(phenylsulfenyl)vinyltrimethylsilane for the addition to aldehydes in the presence of fluoride anion [29]. Recently, Prakash et al. [30] reported the synthesis of β-trifluoromethylstyrenes through a Heck coupling reaction of aryl iodides with 1-iodo-3,3,3-trifluoropropane, allowing a direct introduction of 3,3,3-trifluoropropenyl groups to aromatic rings. Approximately at the same time, our research group demonstrated that (E)-trimethyl(3,3,3-trifluoroprop-1-en-1-yl)silane (1) effectively participated in a Hiyama cross-coupling reaction with aryl iodide to construct β-trifluoromethylstyrenes in good to excellent yield [31,32]. In the course of this study, we found that the reaction of 1 with benzaldehyde in the presence of fluoride anions afforded an allyl alcohol, which spontaneously isomerized to phenyl 3,3,3-trifluoropropyl ketone (3a). This reaction involves a one-pot synthesis of aryl 3,3,3-trifluoropropyl ketones from the corresponding arylaldehyde, representing the oxidative 3,3,3-propenylation of the arylaldehyde. Here, we report our study of this unusual reaction.

At the outset of our study, we attempted selective C–Si bond dissociation of 1 with several fluoride anion sources. The subsequently generated carbanion was trapped with benzaldehyde to generate 4,4,4-trifluoromethylallyl alcohol 4 (Table 1). We found that this reaction did not take place when either TiF4 in THF or CuF2/dppp in DMF was used (Table 1, entries 1 and 2). However, the reaction proceeded when two equivalents of CsF to arylaldehyde 2 were used in DMA at a temperature of 55 °C, affording 3a and 4a in 15% and 16% yield, respectively (Table 1, entry 3). In contrast, the reaction did not proceed in THF (Table 1, entry 4). The yield increased as the temperature was raised to 80 °C, but a further increase to 100 °C did not improve the yield of the reaction (Table 1, entries 5 and 6). Changing the solvent to DMF considerably shortened the reaction time. The added amount of CsF also influenced this reaction. The reaction conducted with four equivalents of CsF afforded 3a and 4a in 52% and 27% yield, respectively (Table 1, entry 8). However, a further increase of the amount of CsF did not improve the reaction yield (Table 1, entry 9). We thus determined that the conditions used in entry 8 of Table 1 were optimal. We explored the scope and limitation of this reaction by using these optimal conditions.

aThe reaction was carried out with 2a (0.2 mmol) and a solvent (2.0 mL). bThe value in parentheses indicates equiv with respect to benzaldehyde (0.2 mmol). cNMR yields, which were calculated by integration of the 19F NMR signals of 3a and 4a relative to that of the internal standard of 1,4-bis(trifluoromethyl)benzene. dThe value in parentheses indicates isolated yield (%).

During the course of this study, it became obvious that the reaction gave allyl alcohol 4 first, and then subsequent transformation of 4 into 3 occurred during the reaction process. Recently, both Cahard et al. [33,34] and Qing et al. [35] independently reported that the isomerization of a 4,4,4-trifluoromethylallyl alcohol substructure was promoted by a ruthenium catalyst to form a 3,3,3-trifluoropropylcarbonyl unit. We hypothesized that the formation of 3 would be promoted by inter- or intramolecular migration of the benzylic proton of 4 in the basic medium. To confirm the hypothesis, we conducted the reaction by using benzaldehyde-d to clarify whether or not proton migration was involved in the reaction sequence. When benzaldehyde-d was treated with 1 and CsF in DMF at 80 °C, the reaction gave a product in which deuterium was inserted on the α- and β-carbons of the carbonyl group with rates of 22% and 53%, respectively (Scheme 1, (1)). This result suggests that deuterium on the β-carbon should be incorporated by a 1,3-proton shift. In contrast, deuterium on the α-carbon should be inserted when the enolate intermediate, which is generated during the reaction, intermolecularly extracted the benzylic deuterium of 4. To further investigate the reaction mechanism, 4a was exposed to basic conditions to observe whether or not the isomerization of 4a to 3a would occur. Indeed, the treatment of 4a with a stoichiometric amount of DBU resulted in an almost quantitative conversion to 3a (Scheme 1, (2)).

This suggests that the reaction provides 4 first. 4 subsequently isomerizes to form 3, which is an oxidative 3,3,3-trifluoropropylation of the arylaldehyde. These results allowed us to propose the reaction mechanism shown in Scheme 2, which includes the isomerization of 5 to 6 in the formation of 3. To support our proposed mechanism, a computational calculation was performed with Gaussian 03W at the B3LYP/6-31+G* level of theory to confirm that key intermediate 7 was involved in the isomerization process. The calculation indicated that intermediate 5 generated in the first step of the reaction was slightly more stable (0.417 kcal/mol) than 7. The slight energy difference between 5 and 7 indicates the viability of 7 in the reaction medium. The generation of 7 would facilitate the isomerization of 5 to 6.

We thank Professor Takashi Yamazaki from the Graduate School of Engineering, Tokyo University of Agriculture and Technology for calculating the molecular stability of 5 and 7.

© 2013 Ikeda et al; licensee Beilstein-Institut.
This is an Open Access article under the terms of the Creative Commons Attribution License (http://creativecommons.org/licenses/by/2.0), which permits unrestricted use, distribution, and reproduction in any medium, provided the original work is properly cited.
The license is subject to the Beilstein Journal of Organic Chemistry terms and conditions: (http://www.beilstein-journals.org/bjoc) 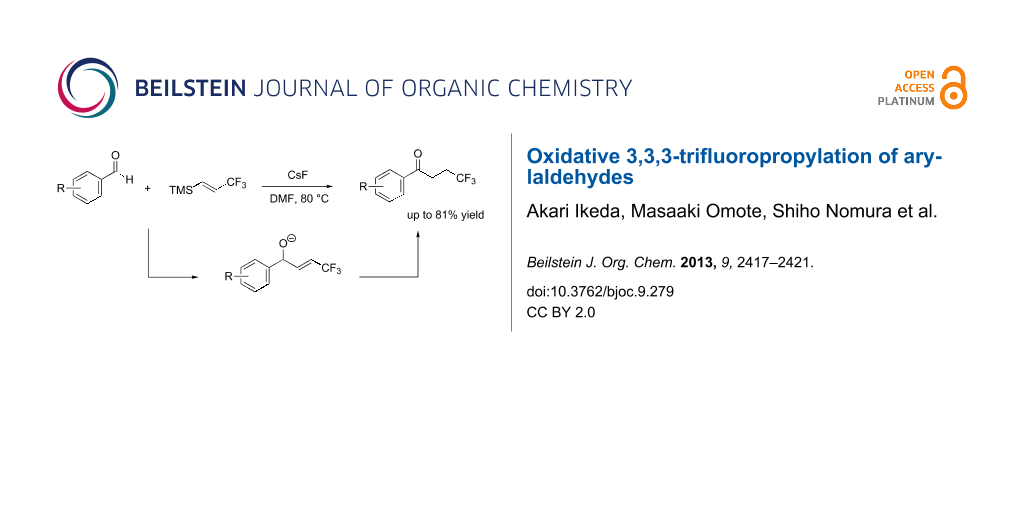