All articles from this author
Sheng-Yong Zhang


All articles from this author
Henri B. Kagan

The azatriquinane derivatives are an important substance class in organic chemistry containing nitrogen and three fused five-membered rings [1-3]. Due to the unique rigid bowl-shaped structure with one noninversible electron lone pair at the bottom of the central nitrogen (“centro-N”) atom, 10-azatriquinane analogues are used as efficient chelation reagents of metal cations [4,5]. Mascal and colleagues [6] described the first synthesis of 10-azatriquinane (1) from dimethyl 3,3'-(1H-pyrrole-2,5-diyl)dipropanoic acid in five steps, and the reactivity of 1 was also investigated. 10-azatriquinane (1) is very active because of its high basicity. The X-ray structure of 1·HBF4 revealed that the centro-N is pyramidalized. 10-azatriquinacene (2), an unsaturated analogue of 1, was attractive due to its high proton affinity [7]. Recently, Mascal [8] and colleagues have developed a series of 10-azatriquinanes as a C3v-symmetric platform for tripodal metal complexes and calixiform scaffolds (Figure 1).

Previously, we established a facile access to enantiopure asymmetric cis-2,5-disustituted pyrrolidines 4 from commercially available starting materials diethyl meso-2,5-dibromoadipate and (S)-(−)-1-phenylethylamine (Figure 2) [9]. The preparations of compounds 5a, 5b, 6a and 6b were also reported in [9], but our previously published structures for compounds 5a and 5b were not completely correct, because the B–N dative bonds were missing. The aim of the following procedures was to obtain several novel bifunctional N-hetereocyclic carbenes (NHCs) [10-14] from compounds 4 through three steps, including reduction, debenzylation and cyclization (Scheme 1), but this failed. However, we have found a novel one-pot tandem cyclization of these enantiopure asymmetric cis-2,5-disubstituted pyrrolidines to produce chiral trisubstituted 10-heteroazatriquinane derivatives. To the best of our knowledge, there is very little research on the synthesis of 10-heteroazatriquinanes, and the chiral 10-heteroazatriquinanes are unknown up to now.

For the reduction of highly hindered amides 4, the system of LiAlH4 in anhydrous THF was found to be useless even upon heating under reflux for 18 h under an inert atmosphere, and no desired diamino-alcohols were obtained after workup. However, 4a reacted smoothly with BH3 to give white crystals after chromatographic purification (Scheme 2). The X-ray single-crystal diffraction analysis established that the reduction product 5a (Figure 3) was formed with a rigid 10-heteroazaquinane skeleton through an intramolecular Lewis acid–base pair interaction [15-18]. Three five-membered rings are fused to give a very stable bowl-shaped tricyclic system with five stereogenic centers, especially for one chiral nitrogen center and one chiral boron center. The configurations of the stereogenic centers in 5a are deduced from the configuration of the chiral auxiliary (S)-(−)-1-phenylethylamine to be S, 3S, 6R, 9S (chiral B atom) and 10R (chiral N atom), respectively. This novel tandem reduction/cyclization was made possible by the cis-configuration of the starting 2,5-disubstituted pyrrolidine 4a. Following the same procedure, 10-heteroazaquinane 5b was obtained in good yield (87%), and the configurations of 5b were assigned to be S, 3R, 6S, 9R (chiral B atom) and 10S (chiral N atom), respectively. Compounds 5a and 5b are diastereomers.

In the presence of a catalytic amount of Pd(OH)2/C, under 1.0 atm of hydrogen, the above 10-heteroazaquinane derivatives 5 were converted into enantiopure asymmetric cis-2,5-disubstituted pyrrolidines 6 in good yields with a diamino-alcohol skeleton. In this process, both N-debenzylation and a ring-opening reaction occurred. Diamino-alcohols 6a and 6b are enantiomers, and they can serve as precursors for the synthesis of hydroxy N-heterocyclic carbenes. Following the reported procedure for the preparation of N-heterocyclic carbenes [19,20], the enantiopure pyrrolidine 6b and NH4BF4 in HC(OCH3)3 is heated to 80 °C for 2 h, the light yellow crystals were obtained in good yield after workup (Scheme 3). The same result was obtained by heating the mixture of 6b, NH4BF4 and HC(OCH3)3 in anhydrous toluene under reflux.

To our delight, a single crystal was grown from CH2Cl2, suitable for X-ray diffraction analysis. It was found that the ring-closing reaction took place during the heating process following N-methylation to provide the rigid 1-oxo-3-aza-10-azaquinane skeleton 7b as its ammonium salt. Compound 7b contains four stereogenic centers, and their configurations are assigned to be 2R, 5S, 8R and 10R (chiral N atom) based on its starting material 4b (Figure 4). Actually, HC(OCH3)3 as an efficient reagent for C-, N-, and O-methylation has been reported [21-24], but the mechanism of these methylations is elusive. The other chiral ammonium salt 7a was obtained under the same conditions as those for the preparation of 7b. The chiral ammonium salts 7a and 7b were derived from the enantiomers 6a and 6b, therefore, 7a and 7b are also enantiomers. The configurations of 7a are assigned to be 2S, 5R, 8S and 10S (chiral N atom).

As shown in Figure 4, this 10-heteroazatriquinane 7b possesses a rigid bowl-like molecular scaffold with a quaternary nitrogen site (N2) at the bottom of the cavity. Recently, Denmark and colleagues [25,26] have synthesized a series of chiral phase-transfer catalysts (chiral PTCs) based on a 2-azatriquinane skeleton (Figure 5), and they have investigated their catalytic activities in asymmetric alkylation reactions for producing enantiomerically enriched amino acids. The synthesis of these quaternary ammonium ions follows a diversity-oriented approach wherein the tandem inter-[4 + 2]/intra-[3 + 2] cycloaddition of nitroalkenes serves as the key transformation. The chiral ammonium salts 7 have a structure similar to the chiral PTCs of Denmark et al. The substituents in the chiral ammonium salts 7 are easily tunable, which could open a route to various chiral PTCs for organic synthesis.

In summary, we provide here a facile access to chiral 10-heteroazatriquinanes from enantiopure asymmetric cis-2,5-disubstituted pyrrolidines through one-pot tandem cyclization reactions, and their configurations are confirmed by X-ray single-crystal diffraction analysis. The applications of these novel 10-heteroazatriquinanes are currently being investigated in our laboratory.

We would like to thank the National Science Foundation of China (No. 20802092) and the Young Scholar Foundation of the Fourth Military Medical University (FMMU, China) for financial support of this work. P. A. Wang also thanks the Centre National de la Recherche Scientifique (CNRS, France) for a postdoctoral fellowship to work in the Laboratoire de Catalyse Moléculaire in the ICMMO, Université Paris-Sud. 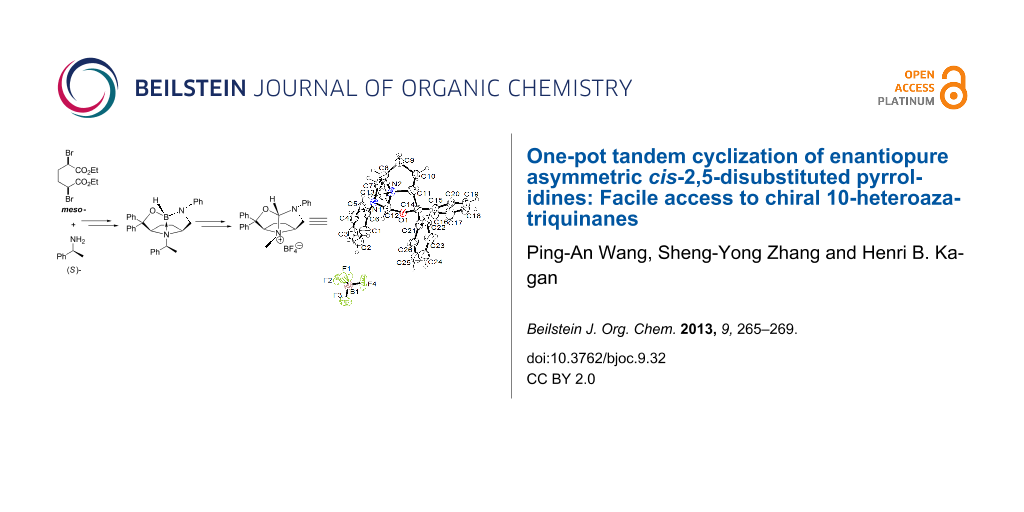