All articles from this author
Takuma Kamon


All articles from this author
Takehiko Yoshimitsu

An iron(II)-mediated aminohalogenation of a cyclopentenyl N-tosyloxycarbamate provided new access to the key intermediate for the synthesis of (−)-agelastatin A (AA, 1), a potent antiproliferative alkaloid. The present synthetic endeavour offered an insight into the mechanism underlying the iron(II)-mediated aminohalogenation of N-tosyloxycarbamate, in which the radical properties of the N–iron intermediates in the redox states were operative.

Marine organisms often produce bioactive substances that potentially serve as attractive resources for drug discovery. (−)-Agelastatin A (AA, 1), a cytotoxic alkaloid isolated from marine sponges Agelas dendromorpha and Cymbastela sp., is one such substance, which has drawn considerable attention due to its potential applicability in the development of anticancer agents [1-5]. The intriguing biological activity of 1 has stimulated interest in developing various chemical accesses to the natural product [6-25]. Our previous synthetic endeavours have established two approaches to 1, in which cyclopentenyl azidoformates 2 and 3 were utilized as the pivotal intermediates (Scheme 1).

The first-generation strategy employed a stereoselective thermal aziridination of azidoformate 2 and a subsequent aziridine-opening reaction to establish the vicinal trans nitrogen motif 4 [26]. The second-generation strategy involved the radical aminobromination of azidoformate 3 followed by lactamization of the resultant bromide 5a to furnish a tetracyclic compound (structure not shown), which was transformed into the natural product [27]. In the present study, we disclose a new approach to the key intermediate for AA synthesis in which N-tosyloxycarbamate 8, a nonhazardous azidoformate surrogate, is transformed into aminohalogenated compounds 5a and 5b by FeBr2/Bu4NBr [28,29], FeCl2/Bu4NCl, or FeCl2/TMSCl [30-35] (Scheme 2). Moreover, a plausible mechanism of the present iron(II)-mediated aminohalogenation, which is inferred from the unique reactivity of N-tosyloxycarbamate 8 with the reagents, is discussed.

N-Tosyloxycarbamate 8 was prepared from alcohol 6, which was obtained by a previously reported protocol (Scheme 2) [26,27]. Alcohol 6 was first treated with CDI (N,N’-carbonyldiimidazole) and then with hydroxylamine hydrochloric acid salt to afford N-hydroxycarbamate 7 in 67% yield [36]. Thereafter, N-hydroxycarbamate 7 was reacted with TsCl and triethylamine in THF to furnish N-tosyloxycarbamate 8 in 92% yield. With this carbamate 8, we examined the iron(II)-mediated cyclization under various conditions (Table 1).

The application of FeBr2 (0.5 equiv)/Bu4NBr (1.5 equiv) in EtOH effected cyclization, but the yield of 5a was poor due to the concomitant formation of carbamate 9 (39%) and enone 10 (30%) (Table 1, entry 1). This was in marked contrast to the observation that the same reagent system, i.e., FeBr2 (0.5 equiv)/Bu4NBr (1.2 equiv), allowed the efficient conversion of azidoformate 3 (2 g scale) in EtOH to afford 5a in 70% yield (Scheme 3). The distinct yields of the cyclized materials obtained from N-tosyloxycarbamate 8 and azidoformate 3 suggested the unique reactivity of each substrate towards the iron(II) halide (see below). An aminochlorination reagent system, i.e., FeCl2 (0.5 equiv)/Bu4NCl (1.2 equiv) in EtOH, in turn, furnished the corresponding chloride 5b in 39% yield as the major product (Table 1, entry 2). Our recent studies on the iron(II)-mediated aminobromination reactions of structurally simple N-tosyloxycarbamates with FeBr2/Bu4NBr revealed significant solvent effects on the product yields [28]. This was also the case in the present study: FeBr2 (0.5 equiv)/Bu4NBr (1.2 equiv) in t-BuOH successfully improved the yield of 5a relative to the reaction in EtOH (Table 1, entry 3). FeCl2 (0.5 equiv)/Bu4NCl (1.2 equiv) in t-BuOH culminated in the highest yield of 5b among the examined conditions (Table 1, entry 4) However, a reduction of FeX2 loading even in t-BuOH led to erosion of the yields of halides 5a and 5b with recovery of the substrate (Table 1, entries 5 and 6). With the FeCl2/TMSCl reagent system [30-35], chloride 5b was accessible from N-tosyloxycarbamate 8 in 29% yield, along with 9 in 12% yield (Table 1, entry 7). In this particular case, cyclopentanone derivative 11 (16%) and diethyl ketal 12 (14%) were produced as well (Figure 1). An additional experiment to elucidate the origin of their formation provided evidence that these byproducts were generated by the intramolecular cyclization of enone 10 with TMSCl in EtOH, suggesting that the FeCl2/TMSCl system also gave enone 10 in ca. 30% yield [37].

The present study on the aminohalogenation reaction of carbamate 8 has inspired mechanistic insights that deserve discussion (Scheme 4). We hypothesize that cyclized material 5a/5b, reduced material 9, and enone 10 are generated from an N–iron complex (i) that has free-radical character, as previously proposed in the catalytic cyclization of azidoformates [30,38-40]. The contrasting yields obtained from N-tosyloxycarbamate 8 and azidoformate 3 under FeBr2/Bu4NBr in EtOH conditions (see Table 1, entry 1 versus Scheme 3) likely originate from the distinct chemical property of the N–iron species (i) generated from each substrate. The possible coordination of tosylate anion to the N–iron after the N–O bond cleavage with FeX2 may have affected the electronic and steric characters of intermediate (i), leading to retardation of the subsequent cyclization. Because of the low cyclization rate, the production of reduced carbamate 9 and enone 10 became pronounced. This is consistent with the observation that the relatively efficient production of cyclized material 5a was observed for azidoformate 3, where N–iron intermediate (i) was free from such interactions. One of the other characteristics found in the present transformations was the incomplete consumption of substrate 8 by lowering FeBr2/Bu4NBr loading (e.g., Table 1, entry 5), which, in turn, enabled the efficient conversion of structurally simple N-tosyloxycarbamates into the corresponding cyclic aminobromides [28]. This poor conversion under conditions of less FeX2/Bu4NX loading may be attributable to the decrease of the concentration of reactive FeX2 through capture with the polar amide functionality of 8.

It is speculated that product 9 may be produced by trapping N–iron complex (i) with another FeX2 (i→vii→9), whereas enone 10 is likely to be generated via intramolecular allylic hydrogen abstraction followed by halogen transfer to regenerate iron(II) species (i→iv→v→10) and/or by directly releasing FeX2 (i→iv→vi→10) [41]. However, it is worth discussing the process for yielding 9, which theoretically generates two equivalents of iron(III) species per one equivalent of vii. Given the observation that FeCl3/Bu4NCl gave none of the products shown in Table 1, an iron(III) species possibly generated via the halogen exchange of vii with Bu4NX, if any, no longer has catalytic activity and thus the catalytic cycle is terminated. Therefore, active FeX2 species should somehow be regenerated to maintain the catalysis. One possible pathway that may account for the production of carbamate 9 through the regeneration of FeX2 species is the intermolecular hydrogen abstraction from substrate 8 by N–iron species (i) (Scheme 5). The intermediacy of the intermolecular hydrogen abstraction of N–iron species (i) is supported by the fact that the production of 9 was more pronounced in EtOH having a C–H bond α to the oxygen, which likely served as a hydrogen donor (Table 1, entries 1 and 2). It should be mentioned that reduced material 9 may also be produced by Bu4NBr alone as observed in our previous study [28]. To elucidate the contribution of this pathway, compound 8 was treated with Bu4NX in t-BuOH. However, no reduced material was obtained within the reaction times depicted in Table 1 [for instance, 0.5 h stirring for Bu4NBr (Table 1, entry 3) and 2.5 h stirring for Bu4NCl (Table 1, entry 4)], indicating that the non-iron-mediated process is not significant [42]. Various yields of 9 obtained by loading consistent amounts (1.2–1.5 equiv) of Bu4NX salts also indicated the poor contribution of the pathway. Chan and co-workers demonstrated that an iron–imido complex generated from FeCl2/PhI=NTs underwent radical hydrogen abstraction from a formyl group, and combined the resultant radicals (hydrogen atom abstraction/radical rebound pathway) to provide amides [43,44]. The involvement of such an iron complex (shown in brackets in Scheme 4) that features radical/metal–nitrenoid properties can be considered in our reactions. A recent study by Betley and co-workers on high-spin iron–imido complexes generated by the reactions of alkyl azides with FeCl2 bearing dipyrromethene ligands revealed the radical character of the complex [39,40], harmonizing well with our result, which implies the intermediacy of the nitrogen radical species.

We have developed a new approach to key compounds 5a/5b for (−)-agelastatin A (1) synthesis, which features the iron(II)-mediated radical cyclization of N-tosyloxycarbamate, a safe azidoformate surrogate. Although somewhat moderate chemical yields of the compounds were obtained in this study, the elimination of hazardous synthetic processes enables the establishment of more robust strategies to access 1. Furthermore, the present study has allowed us to obtain mechanistic insights suggesting that N–iron species (i) has a metal-radical character. Much work is currently being undertaken to comprehend fully the unique properties of the present reactions.

The authors are deeply indebted to Professor Tetsuaki Tanaka for his encouragement. This work was supported by a Special Grant generously provided by the Hoansha Foundation and a Grant-in-Aid for Scientific Research on Innovative Areas [No. 22136006] from the Ministry of Education, Culture, Sports, Science and Technology of Japan (MEXT).

© 2013 Shigeoka et al; licensee Beilstein-Institut.
This is an Open Access article under the terms of the Creative Commons Attribution License (http://creativecommons.org/licenses/by/2.0), which permits unrestricted use, distribution, and reproduction in any medium, provided the original work is properly cited.
The license is subject to the Beilstein Journal of Organic Chemistry terms and conditions: (http://www.beilstein-journals.org/bjoc) 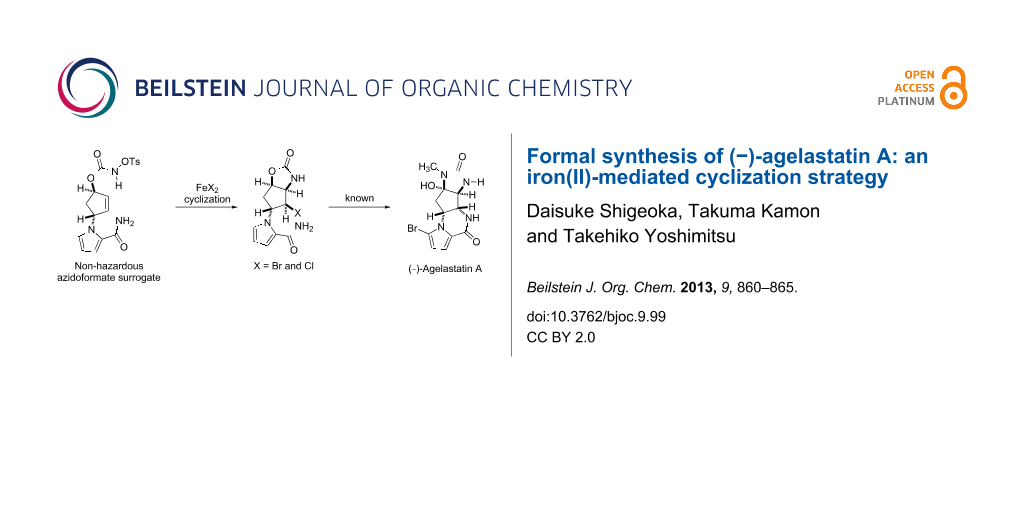