All articles from this author
Didier Léonard


All articles from this author
Thierry Le Mogne


All articles from this author
Francesca Zuttion


All articles from this author
Céline Chevalier


All articles from this author
Magali Phaner-Goutorbe


All articles from this author
Yann Chevolot


All articles from this author
Jean-Pierre Cloarec

This article is part of the Thematic Series "Organized films".

Single-step orthogonal chemical functionalization procedures have been developed with patterned gold on silica surfaces. Different combinations of a silane and a thiol were simultaneously deposited on a gold/silica heterogeneous substrate. The orthogonality of the functionalization (i.e., selective grafting of the thiol on the gold areas and the silane on the silica) was demonstrated by X-ray photoelectron spectroscopy (XPS) as well as time-of-flight secondary ion mass spectrometry (ToF–SIMS) mapping. The orthogonal functionalization was used to immobilize proteins onto gold nanostructures on a silica substrate, as demonstrated by atomic force microscopy (AFM). These results are especially promising in the development of future biosensors where the selective anchoring of target molecules onto nanostructured transducers (e.g., nanoplasmonic biosensors) is a major challenge.

The orthogonal self-assembly of different molecules onto a patterned substrate was first demonstrated in 1989 by Whitesides and co-workers [1]. Recently, especially with the development of localized surface plasmon resonance (LSPR) biosensors, this topic has become a major focus [2-8]. Indeed, LSPR transduction is expected to yield enhanced signal as compared to classical SPR transduction. However, the enhancement of the LSPR limit of detection is effective only if the molecular targets reach the surface of the metallic LSPR active zones. When dealing with a low concentration of molecular targets, it is necessary to reduce nonspecific adsorption of targets outside of these LSPR active zones, and to increase the specific capture of targets onto LSPR hot spot areas. Orthogonal surface chemical functionalization appears to enable such directed anchoring of target biomolecules (Figure 1) [6,8,9].

Despite the aforementioned publications, there is still much to be investigated regarding the orthogonal functionalization of patterned metal on dielectric surfaces for even greater enhancement of LSPR-based biosensors. First, the orthogonality of the functionalization is often assumed from “end of process measurements” (i.e., SPR signal readout occurs after target immobilization) rather than directly characterized prior to target immobilization. Second, while biotinylated poly(ethylene glycol) [5-8] may be well suited to immobilize some biomolecules (avidin derivatives), it is worth considering other surface chemistries. For instance, carboxylic acid-based [10-21], amine-based [22-26] or other [27,28] self-assembled monolayers may provide a higher diversity of potential biomolecules to immobilize. Shorter spacer chains (e.g., short alkyl chains) may also be useful to immobilize the target as close to the metal surface (i.e., the maximum intensity of the evanescent field) as possible. If the molecules used for the orthogonal functionalization are truly selective for each material, it can be expected that the functionalization of both may be performed simultaneously, thus simplifying the whole process.

Therefore, this paper presents a facile single-step orthogonal functionalization protocol to selectively bind different thiols and silanes (mixed in organic solvent at room temperature) onto the gold and silica areas of a patterned surface. The chemical functionalization was verified by direct characterization using XPS and ToF–SIMS mapping. To this end, microscale gold structures were used to evaluate the different materials separately (especially for XPS characterization, whose spatial resolution is on the order of 10 µm) and combined with perfluorinated thiols and silanes that give a strong fluorine signal both in XPS and ToF–SIMS measurements. Finally, an orthogonal functionalization with biologically pertinent molecules (antifouling poly(ethylene glycol) silane and biotinylated thiols) was used for the selective immobilization of proteins onto metallic nanostructures relevant to the development of LSPR biosensors and characterized by atomic force microscopy (AFM).

Micropatterned gold on a silica substrate (with features of ≈100 µm) functionalized with either (1) 1H,1H,2H,2H-perfluorodecanethiol and 2-[methoxy(polyethyleneoxy)propyl]trimethoxysilane (F-thiol + PEG/Si) or (2) trichloro(1H,1H,2H,2H-perfluorooctyl)silane and 11-mercapto-1-undecanoic acid (F-silane + MUA) were analyzed using XPS. For both surfaces, an initial image was acquired using scanning X-ray imaging (SXI; X-ray beam induced secondary electron images). This allows the gold microsquares (brighter) and surrounding silica areas (darker) to be visualized, as shown in Figure 2 and Figure 3. Then, two different analysis areas (≈10 µm in diameter) corresponding to the gold and silica surfaces were selected to perform a survey spectrum. High-resolution spectra of the different peaks could not be obtained due to the low signal from the small analysis areas. These spectra show the following:

1. On gold (left spectrum), fluorine is clearly present as evidenced by the F 1s and F KLL peaks, showing the presence of the perfluorinated thiol (F-thiol, molecular structure given above the spectrum). Furthermore, no Si 2s or O 1s peaks were detected, verifying the absence of PEG/silane. This suggests that, on the gold areas, F-thiol is specifically grafted while PEG/Si is not adsorbed.

2. On silica (right spectrum), fluorine is clearly absent as evidenced by the lack of F 1s or F KLL peaks, verifying the absence of the F-thiol. The presence of PEG/silane cannot be assessed by the silicon or oxygen-related peaks since these are present on the silica substrate. However, the presence of the C 1s peak seems to suggest that the silane is indeed grafted, though a contribution from other sources of carbon cannot be ruled out.

– When the sample is simultaneously functionalized with F-silane and an alkylthiol (Figure 3), the orthogonality of the functionalization is proven by the same arguments as above, the main one being the presence of fluorine on silica and not on gold.

We also conducted fluorine mapping on similar orthogonally functionalized surfaces using ToF–SIMS, which has been shown to be especially well-suited for the characterization of chemically patterned surfaces [29,30]. Figure 4 shows the presence of fluorine in both cases (F-thiol + PEG/Si and F-silane + MUA). In each case, only fluorine is present (or is very predominant) on the gold microsquares (Figure 4a) or the surrounding silica (Figure 4b) but not on both, which demonstrates the good orthogonality of the single-step orthogonal functionalization.

Additionally, a nanostructured gold-on-silica substrate was functionalized with biotinylated thiols and antifouling PEG/silanes. A similar approach was already used to direct the immobilization of streptavidin-coated nanoparticles [31] onto the gold nanostructures. Here, “single” (i.e., not adsorbed on beads) proteins were immobilized as shown in Figure 5.

The orthogonal chemical functionalization of patterned metal on dielectric surfaces appears to be a key process to direct target biomolecules onto individual nanostructures. This can be useful in different fields of nanotechnology, especially in the development of LSPR-based biosensors. In this paper, we reported different single-step functionalization procedures of patterned gold on silica surfaces with alkylthiols and silanes. The direct chemical characterization using XPS and ToF–SIMS provided evidence of the orthogonality, and AFM topography measurements showed the utility of this approach for biomolecule immobilization. Current work is being undertaken to implement this methodology into LSPR biosensors.

A silica thin film (100 nm) was sputtered onto clean silicon wafers. UV lithography was used to define different patterns (lines, squares) with typical dimensions ranging from 2 to 100 µm. Electron beam lithography was used to develop the gold nanostructures (typical dimensions of 100 nm). Titanium (8 nm) and gold (30 nm) were deposited by electron beam evaporation. After lift-off, the samples were cleaned by oxygen plasma treatment (Anatech) at 400 sccm of oxygen, 350 W of forward power (10 W reflected), 90 Pa, for 5 min to ensure that no residual resist remained on the surface.

After plasma cleaning, the resulting gold oxide is unstable and the samples were allowed to deoxidize for 24 h in fluoroware. Then, the samples were immersed in thiol/silane solutions under nitrogen and allowed to react for 48 h. The samples were then rinsed two times with fresh DCM for 5 min under sonication (Branson, 42 kHz, 100 W) followed by a stream of ultrapure water and dried with nitrogen.

XPS characterization was conducted using an ULVAC-PHI VersaProbe II spectrometer equipped with a monochromatic Al Kα X-ray source (1486.6 eV). The analysis area can be adjusted from 200 µm to 10 µm and the energy scale was calibrated with reference to the C 1s line at a binding energy of 284.8 ± 0.1 eV (C–C/C–H). The charging effect is controlled by a dedicated neutralizer using a combination of ions and electrons at very low energy (0.1 eV). The X-ray spot can be scanned with a field of view of 1300 µm. This instrument allows for the recording of both XPS spectra and SXI images.

ToF–SIMS measurements were performed with a Physical Electronics (Chanhassen, USA), TRIFT III instrument operated with a pulsed 22 keV Au ion gun (ion current of 2 nA). Areas of 300 × 300 µm were scanned. Under the present operation conditions, the lateral resolution is on the order of 1 μm. Submicron resolution can be achieved, albeit hindering mass resolution. The ion dose was kept below the static conditions limits. The data were analyzed using WinCadence software. The mass calibration was performed on hydrocarbon secondary ions.

© 2015 Palazon et al; licensee Beilstein-Institut.
This is an Open Access article under the terms of the Creative Commons Attribution License (http://creativecommons.org/licenses/by/2.0), which permits unrestricted use, distribution, and reproduction in any medium, provided the original work is properly cited.
The license is subject to the Beilstein Journal of Nanotechnology terms and conditions: (http://www.beilstein-journals.org/bjnano) 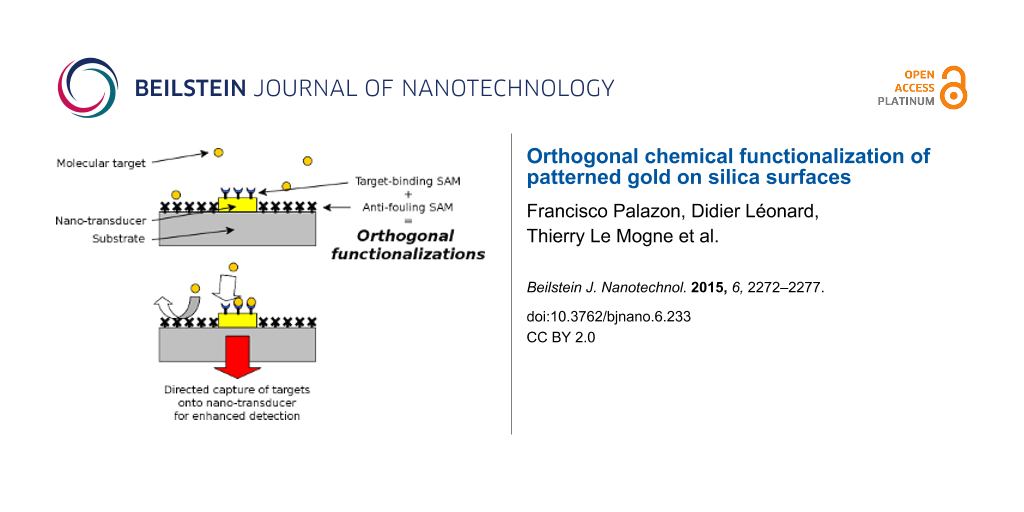