All articles from this author
Ralf Smounig


All articles from this author
Ferdinand Belaj


All articles from this author
David Kvaskoff

School of Chemistry and Molecular Biosciences, The University of Queensland, Brisbane, Qld 4072, Australia


All articles from this author
Curt Wentrup

School of Chemistry and Molecular Biosciences, The University of Queensland, Brisbane, Qld 4072, Australia

The structures of two derivatives of the bisdioxine diisocyanate 1, the bisurea 4 and the biscarbamate 5, are established by X-ray crystallography and DFT calculations. These compounds possess endo,endo structures, in the case of the bisurea 4 with two nearly parallel pendant chains. The X-ray structures are reproduced very well by DFT calculations. Similar endo,endo conformations are calculated for the bisamide crown ether derivatives 7, where two proximate and nearly parallel crown ether units endow the molecules with a claw-like molecular cleft or tweezer structure as evidenced by an enhanced ability to extract some alkali, alkaline earth and rare earth metal ions.

The synthesis of the surprisingly stable, monomeric diisocyanate 1 (Figure 1) was reported recently [1]. This and several other derivatives of the unique 2,6,9-trioxabicyclo[3.3.1]nonadiene (“bisdioxine”) system, including the diacid, the diacid dichloride 2 [2] and the diethyl ester 3 [3] are readily synthesized from the stable dimer of dipivaloylketene.

DFT calculations at the B3LYP/6-31G** level predict that molecules of this type can exist only in the endo,endo forms shown, i.e., with the functional groups pointing “downwards”, away from the central ether bridge [1]. The calculated endo,endo and endo,exo structures of 1 are shown in Figure 2. However, neither the endo,exo structure, nor the exo,exo isomer (not shown) represent stable energy minima [1]. Optimization of the endo,exo structure leads to ring opening to a new diisocyanate (Scheme 1). Therefore, it is of some importance to ascertain the actual molecular structures of compounds of this type by X-ray crystallography.

The di(hexylurea) 4 and the di(methyl carbamate) 5 were synthesized by addition of hexylamine and methanol, respectively, to diisocyanate 1 (Scheme 2) [1]. The crystal structure analysis of 4 confirmed the compound as 1,3,5,7-tetra-tert-butyl-2,6,9-trioxabicyclo[3.3.1]nona-3,7-diene-4,8-diyl-bis(3-hexylurea). All atoms lie on general positions. The asymmetric unit consists of two molecules, A and B (see Figure 3 and Figure 4) related by a pseudo-inversion center. A refinement with only one molecule in a unit cell with a’ = a/2 – corresponding to the fact that reflections with h odd [Imax 12.74(38)] are far weaker (but still significant) than those with h even [Imax 1000(27)] – resulted in an much higher R value, R1 = 0.0942. In each molecule there is one H atom (H31, H81) bonded to the nitrogen atom, which is cis to the O atom of the urea subunit. These H atoms are not involved in hydrogen bonding. The other H atoms of the same urea subunit (H(N32) and H(N82)) show intramolecular hydrogen bonds to O40 and O90 of 1.970 and 2.006 Å, respectively (dashed lines in Figure 3 and Figure 4). The four other H atoms bonded to N show intermolecular hydrogen bonds forming chains parallel to the [1] direction.

The analogous crystal structure analysis of 5 confirmed this compound as dimethyl (1,3,5,7-tetra-tert-butyl-2,6,9-trioxabicyclo[3.3.1]nona-3,7-diene-4,8-diyl)biscarbamate. The molecules are ordered around two-fold rotation axes through O9 (Figure 5). Each molecule is connected by a donor and an acceptor hydrogen bond to each of two adjacent molecules. Thereby chains parallel to the [101] direction are formed (see Figure S1 in Supporting Information File 1).

It is seen in the crystal structures depicted in Figures 3–5 that compounds 4 and 5 (and therefore also 1) exist in the endo,endo structures, and each functional group is surrounded by three tert-butyl groups, which direct these functional groups away from the ether bridge. This ascertains that the functional groups with their attachments are oriented essentially parallel, i.e., away from the concave bisdioxine backbone. Furthermore, the intramolecular hydrogen bonds depicted in Figure 3 and Figure 4 ascertain that the two pendant hexylamino chains in 4 are held in close proximity.

The structures of 4 and 5 were calculated at the B3LYP/6-31G** level, which reproduces the crystal structures very well, as demonstrated in Figure 6 and Figure 7 and in Figure S2 and Figure S3 (Supporting Information File 1).

While there are several possible conformations of 4 and 5 (see Figure S2 and Figure S3, Supporting Information File 1), the lowest-energy conformers shown in Figure 6 and Figure 7 are in very good agreement with the X-ray structures. The nearly parallel dangling chains in the lowest-energy conformer of 4 are particularly noteworthy (Figure 6). As in the crystal structure, the two chains are held in this orientation by 2 Å hydrogen bonds. The calculated structure of the diester 3 (Figure S4, Supporting Information File 1) is also in very good agreement with the previously determined crystal structure [3], but unlike the structures of 4 and 5 described above, the two ester moieties in compound 3 point away from each other with an angle of approximately 120° between them.

The endo,endo-structures of compounds 4 and 5 endow them with the character of molecular clefts or tweezers [4-10]. This suggests that other derivatives, such as the bis-crown ether diamides 7 (Scheme 3), would possess similar structures with parallel substituents. Accordingly, we investigated the structures of compound 7a and 7b computationally. Again, there are several possible conformers of each compound, but the lowest-energy conformers shown in Figure 8 and Figure 9 reveal the claw-like character of the dangling chains. This is particularly noteworthy in compound 7b, where a cavity between the two crown-ether moieties is apparent (Figure 9). This suggests that this molecule might be able to form strong complexes with suitable metal ions.

The endo,endo structures of bis-crown ether diamides 7 with parallel crown ether moieties would be expected to endow them with enhanced complexation abilities. The extraction of metal ions from aqueous to chloroform solution was examined for the picrates of Na+, K+, Ca2+ and Ce3+ by using a previously described procedure [11]. For comparison, the performance of the crown ether amines 6a and 6b was evaluated with the same extraction procedure. It is seen in Table 1 that there is a modest increase in the extraction ability of 7a (6–13%) over 6a (4–8%), but a more distinct improvement for 7b (11–15%) compared to 6b (3–9%).

X-ray structure determinations confirmed the endo,endo structures of the bisurea 4 and biscarbamate 5, which in turn confirm the endo,endo structure of the diisocyanate 1. Bis-crown ether diamide derivatives 7 also feature endo,endo structures as confirmed by DFT calculations at the B3LYP/6-31G** level. This endows them with claw-like molecular cleft or tweezer properties as manifested in enhanced abilities to extract selected alkali and alkaline earth metal and rare earth ions. The ready availability of diisocyanate 1 and diacid dichloride 2 [1-3,11] paves the way for the synthesis of many other types of compounds with hairpin turns and parallel pendant chains.

Preparations of the di(hexylurea) 4, the di(ethyl urethane) 5 and the diamides 7 were carried out as previously described [1,11-13].

Crystal structures are represented in ORTEP [14]. Tables of crystal data and bond lengths and angles are presented in Supporting Information File 1. The full data can be obtained free of charge from the Cambridge Crystallographic Data Centre via http://www.ccdc.cam.ac.uk/data_request/cif. CCDC numbers 925965 and 925966.

The extractions of ions from H2O to CHCl3 with the aid of bis-crown ether amides 7a and 7c (Table 1) were carried out as described previously [11,16]. Briefly, equimolar amounts of picrate and crown ether in H2O and CHCl3 respectively were shaken vigorously for 10 min. The extent of extraction into CHCl3 was measured by UV spectrophotometry at 354 nm.

This work was supported by the Karl Franzens Universität Graz, The University of Queensland, and the National Computing Infrastructure MAS grant g01 financed by the Australian Government.

Inclusion of trans-resveratrol in methylated cyclodextrins: synthesis and solid-state structures

Inclusion of the insecticide fenitrothion in dimethylated-β-cyclodextrin: unusual guest disorder in the solid state and efficient retardation of the hydrolysis rate of the complexed guest in alkaline solution

© 2015 Kollenz et al; licensee Beilstein-Institut.
This is an Open Access article under the terms of the Creative Commons Attribution License (http://creativecommons.org/licenses/by/2.0), which permits unrestricted use, distribution, and reproduction in any medium, provided the original work is properly cited.
The license is subject to the Beilstein Journal of Organic Chemistry terms and conditions: (http://www.beilstein-journals.org/bjoc) 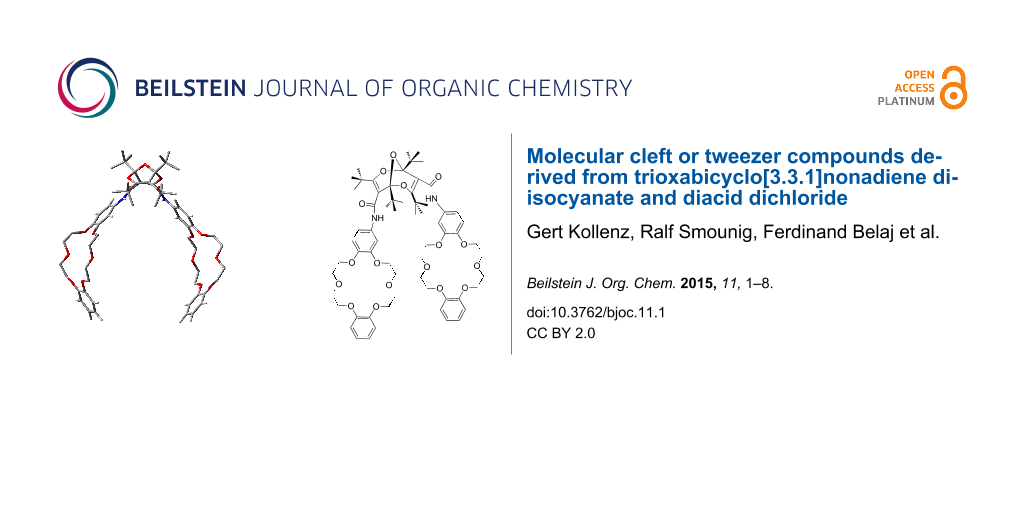