All articles from this author
Kazunori Nagao


All articles from this author
Hirohisa Ohmiya


All articles from this author
Masaya Sawamura

A copper-catalyzed conjugate addition of alkylboron compounds (alkyl-9-BBN, prepared by hydroboration of alkenes with 9-BBN-H) to alkynoates to form β-disubstituted acrylates is reported. The addition occurred in a formal syn-hydroalkylation mode. The syn stereoselectivity was excellent regardless of the substrate structure. A variety of functional groups were compatible with the conjugate addition.

Copper-mediated conjugate additions of organometallic reagents to alkynoates are powerful tools for the synthesis of multisubstituted alkenes [1-8]. Because of their broad availability and their compatibility with a multitude of functional groups, organoboron compounds are especially popular organometallic reagents. Recently, Yamamoto and co-workers developed copper-catalyzed conjugate additions of aryl- and allylboron compounds to alkynoates [9,10], but alkylboron compounds have not been used for these methods [11].

Herein, we report a copper-catalyzed conjugate addition of alkylboranes to alkynoates, providing a versatile approach to β-disubstituted acrylates [16-19]. The addition occurred in a formal syn-hydroalkylation mode. The syn stereoselectivity was excellent regardless of the substrate structure, and a variety of functional groups were tolerated in both the alkylborane and the alkynoate.

The results of ligand screening for the reaction between 2a and 3a are summarized in Table 1. P(OPh)3 was the most effective ligand in terms of product yield and syn selectivity (Table 1, entry 1). The use of other monophosphine ligands such as PPh3 and PCy3 or the DPPE bisphopshine was also effective in promotion of the reaction, but resulted in a reduced stereoselectivity (Table 1, entries 2–4). No reaction occurred with N-heterocyclic carbenes (NHC) such as IMes or IPr (Table 1, entries 5 and 6). The reaction with (IMes)CuCl or (IPr)CuCl complex delivered no reaction product (data not shown). The reaction without a ligand resulted in a significantly decreased product yield while the syn selectivity was fairly high (Table 1, entry 7).

The use of less expensive CuCl as a copper salt was also effective to produce 4aa in 90% yield with 99% syn selectivity. The reaction using MeOH as a proton source instead of t-BuOH caused a drastic reduction in the product yield with the syn selectivity slightly decreased (38%, syn/anti 97:3). The reduction of the yield might be due to the protonation of an alkylcopper species by the more acidic MeOH (vide infra). There was no reaction in the absence of a proton sourse. No hydroalkylation product at all could be found when alkyl-9-BBN 2a was replaced by (2-phenylethyl)boronic acid pinacolate ester; the substrates hardly reacted at all.

A variety of β-disubstituted acrylates were accessible through the hydroboration–conjugate addition one-pot protocol with excellent syn stereoselectivities (Table 2). This protocol tolerated functional groups such as methoxy, ester, phthalimide, fluoro, cyano and aldehyde moieties in the alkylboranes and alkynoates (Table 2, entries 1–3, 6–9 and 11).

The variety of alkynoates used is also shown in Table 2. The fluoro atom and the methoxy, cyano and aldehyde groups were acceptable as para or meta-substituents on the aromatic ring at the β-positions (Table 2, entries 6–9). The alkynoate 3f bearing a 2-thienyl group at the β-position is also compatible with the conjugate addition and gave 94% syn selectivity (Table 2, entry 10). The 1,3-enyne derivative 3g reacted regioselectively to afford a conjugated 2,4-dienoate 4ag in 90% yield with excellent syn selectivity (Table 2, entry 11).

To gain insight into the mechanism of the copper-catalyzed conjugate addition, the reaction between 2a and 3a with t-BuOD under the optimum conditions was conducted (Scheme 3). The reaction afforded 4aa-D, which is deuterated at the α-position of the carbonyl group (93% D). The syn selectivity was slightly decreased due to the deuterium isotope effect: Slower D-trap caused isomerization of organocopper intermediates (vide infra). This experimental result indicates that t-BuOH acts as a proton source.

A possible mechanism for the present copper catalysis is proposed in Figure 1. An alkoxycopper complex (A) is initially formed by the reaction of CuOAc, t-BuOK and P(OPh)3. Boron-to-cupper transmetalation between A and the alkylborane 2 occurs to form an alkylcopper(I) species (B) and a t-butoxyborane (9-BBN-Ot-Bu) [12-15,20-25]. Subsequently, the alkylcopper species B forms a π-complex (C) with alkynoate 3. Then, syn-carbocupration across the C–C triple bond of C with the assistance of Lewis acidic activation with the tert-butoxyborane gave an alkenylcopper intermediate (D). Finally, protonolysis by t-BuOH produces syn-4, regenerating the alkoxycopper complex A.

The minor occurrence of anti-addition is likely due to the geometrical isomerization of the alkenylcopper species (D/D') through a copper(I) allenoate complex (E, Figure 2) [15,26]. The resulting allenoate E can undergo protonolysis to form either syn-4 or anti-4 depending on the substituent effects of R1 and R2, while the isomerized alkenylcopper(I) D' should preferentially yield anti-4. The reduction of syn selectivity in the reaction with PPh3, PCy3 and DPPE may also be due to this isomerization (Table 1, entries 2–4).

In summary, a copper-catalyzed conjugate addition of alkylboranes (alkyl-9-BBN) to alkynoates to form β-disubstituted acrylates is reported. The addition occurred in a formal syn-hydroalkylation mode. The stereoselectivity was excellent regardless of the substrate structure. The availability of alkylboranes through in situ alkene hydroboration is an attractive feature of this protocol and various functional groups are tolerated in both the alkylborane and alkynoate substrates.

© 2015 Wakamatsu et al; licensee Beilstein-Institut.
This is an Open Access article under the terms of the Creative Commons Attribution License (http://creativecommons.org/licenses/by/2.0), which permits unrestricted use, distribution, and reproduction in any medium, provided the original work is properly cited.
The license is subject to the Beilstein Journal of Organic Chemistry terms and conditions: (http://www.beilstein-journals.org/bjoc) 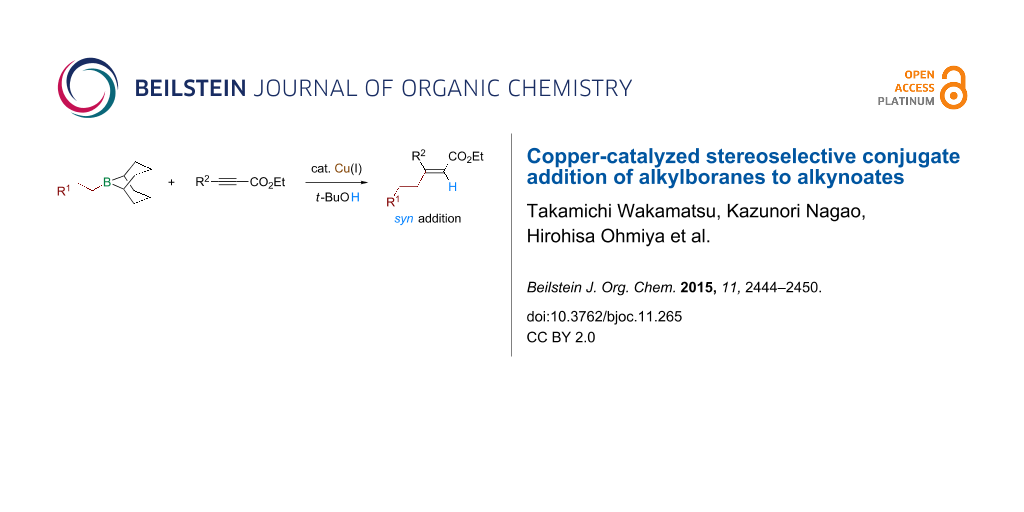