All articles from this author
Xinmou Wang


All articles from this author
Bo Wang


All articles from this author
Gang He


All articles from this author
Gong Chen

Although ε-C−H iodination via directed SEAr proceeds with excellent yield and mono-selectivity for many γ-arylpropylpicolinamides, the scope of these PA-directed SEAr reactions is limited to arenes bearing moderate electron-donating or withdrawing groups. Arene substrates bearing strongly electron-donating substituents typically gave substantial amounts of undesired iodinated side products via competing innate SEAr processes, and arene substrates bearing strongly electron-withdrawing substituents were often unreactive. Herein, we report our development of a Pd-catalyzed PA-directed iodination reaction of ε-C(sp2)−H bonds of γ-arylpropylpicolinamides. This Pd-catalyzed reaction is complementary in scope to the directed SEAr iodination approach and allows for the efficient synthesis of a broad range of THQs with diverse substitution patterns.

Methods for metal-catalyzed halogenation of ortho C−H bonds at the more remote ε position are scarce, in contrast to the large number of ortho C−H halogenation reactions of arenes effected by more proximal directing groups [23-33]. Fundamentally, it is challenging to achieve efficient reactions through kinetically unfavorable seven-membered palladacycle intermediates. Furthermore, the electrophilic reagents used for C–H halogenation can often react with arenes through undirected SEAr pathways, which need to be suppressed for regioselectivity. To address this issue upfront, we commenced our study of Pd-catalyzed ε-C−H halogenation with 3-arylpropylpicolinamide 5 bearing a strongly electron-donating OMe group (Table 1, see Supporting Information File 1 for the preparation of 5). Iodination of 5 under our previous SEAr protocol gave undirected iodination product 7 as the major product; only a trace amount of ortho-iodination product 6 was detected (Table 1, entries 1 and 2). Iodination of 5 under a variety of Pd-catalyzed oxidative conditions gave either low conversion or poor regioselectivity (Table 1, entries 3–5). To our delight, the use of a combination of 2 equiv of I2 and 2 equiv of PhI(OAc)2 in DMF at 110 °C gave the desired product 6 in good yield and moderate selectivity. Similar conditions were reported by Yu to effect the Pd-catalyzed NHTf-directed iodination of δ-C(sp2)−H bonds of β-phenylethyl triflamides [33]. IOAc generated in situ is believed to be the active iodinating species. DMF was found to be the best solvent for this reaction (Table 1, entry 9 vs 11 and 12). Moreover, we found that the choice of alkali carbonate base was important: replacing K2CO3 with KHCO3 or Na2CO3 gave notably improved yields and ortho selectivity (Table 1, entries 9 and 10) [34,35]. By analogy with similar Pd-catalyzed directed C–H halogenation reactions, we speculate that the catalytic cycle follows a sequence of C−H palladation, oxidative addition and reductive elimination [36,37].

aAll screening reactions were carried out in a 10 mL glass vial on a 0.2 mmol scale: bYields are based on 1H NMR analysis of the reaction mixture using CH2Br2 as internal standard; cT/D: TFA (T)/CH2Cl2 (D); disolated yield.

With the best conditions in hand (Table 1, entries 9 and 10), we then examined the substrate scope of this Pd-catalyzed iodination of γ-arylpropylpicolinamides (Table 2). The γ-arylpropylpicolinamides were prepared from the corresponding N-alkylpicolinamides and aryl iodides under our (BnO)2PO2H-promoted Pd-catalyzed γ-C(sp3)−H arylation conditions (see Supporting Information File 1 for details). The substrate scope was chosen to complement the SEAr method, which is notably incompatible with NO2, F and OMe substituents. In contrast to the mono-selectivity of the directed SEAr approach (reaction 2, Scheme 1), iodination of γ-phenylpropylpicolinamide 2 bearing two equivalent ortho C−H bonds under Pd-catalyzed conditions A gave a mixture of mono-iodinated 3 and ortho diiodinated product 4. However, no para-iodinated side product was formed. With 4 equiv of PhI(OAc)2/I2 and 1 equiv of KHCO3, 4 can be formed as the major product in 69% yield.

Arenes bearing meta-substituents (e.g., 12) were selectively iodinated at the less hindered ortho position. Pd-catalyzed iodination of substrate 15 bearing a strongly electron-withdrawing NO2 group also proceeded smoothly to give 16; this substrate is unreactive to directed SEAr. The rigid arylnorbornane scaffold 18 is incompatible with directed SEAr, but was iodinated selectively at the ortho position under Pd-catalyzed conditions without the formation of regioisomeric side products. The strong para-directing effect exerted by aryl fluoride substituents overrides directed SEAr selectivity [38,39]. Thus, we observed only para-iodinated compound 23 when 21 was subjected to the directed SEAr protocol. In contrast, using our Pd-catalyzed iodination (conditions B), ortho-iodinated product 22 was obtained via Pd-catalyzed iodination as the only product in excellent yield. The iodinated intermediates could be readily cyclized under our previously reported Cu-catalyzed conditions to give PA-coupled THQ products with various substitution patterns in good yields (Scheme 2) [8].

We gratefully acknowledge financial support from the State Key Laboratory of Elemento-Organic Chemistry at Nankai University and the Pennsylvania State University.

C–H bond halogenation catalyzed or mediated by copper: an overview

© 2016 Nack et al.; licensee Beilstein-Institut.
This is an Open Access article under the terms of the Creative Commons Attribution License (http://creativecommons.org/licenses/by/2.0), which permits unrestricted use, distribution, and reproduction in any medium, provided the original work is properly cited.
The license is subject to the Beilstein Journal of Organic Chemistry terms and conditions: (http://www.beilstein-journals.org/bjoc) 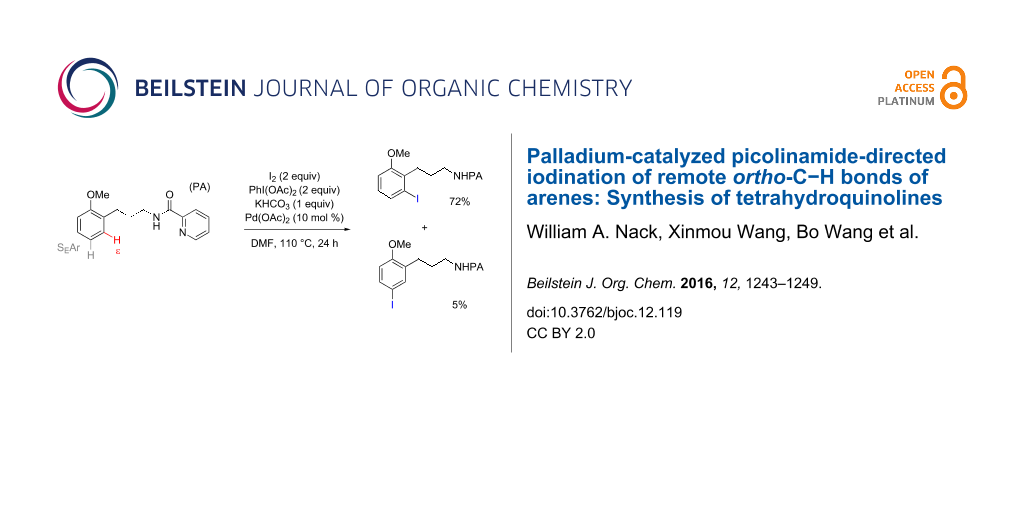