All articles from this author
Kenny Pham


All articles from this author
Shuai Liu


All articles from this author
Marc Legris


All articles from this author
Alex Muthengi


All articles from this author
Jerry P. Jasinski


All articles from this author
Wei Zhang

This article is part of the Thematic Series "Green chemistry" and is dedicated to Prof. James Clark on his 65th anniversary.

The one-pot [3 + 2] cycloaddition of an azomethine ylide with a maleimide followed by another [3 + 2] cycloaddition of an azide with the second maleimide gives a 1,5-diamino intermediate which is used for a sequential aminomethylation reaction with formaldehyde through [5 + 1] annulation to afford a novel polycyclic scaffold bearing tetrahydroquinazoline, pyrrolidine, pyrrolidinedione, and N-substituted maleimide in stereoselective fashion.

The synthesis of new molecules with potential biological activity through pot, atom and step-economic (PASE) reactions is an attractive green organic technique [1-5]. By the combination of multicomponent reactions (MCR) [6-11] with stepwise one-pot reactions [12-17], our lab has introduced a series of synthetic methods for heterocyclic compounds I–VI bearing heterocyclic rings such as hydantoin, pyrrolidine, pyrrolidinedione, piperazinedione, and dihydrobenzodiazepinedione (Scheme 1) [4,18-21]. All these scaffolds were prepared using one-pot intermolecular or intramolecular [3 + 2] azomethine ylide cycloadditions [22-27] as the initial step followed by cyclization or cycloaddition reactions to form polycyclic scaffolds with skeleton, substitution, and stereochemistry diversities. Introduced in this paper is a new sequence initiated with a three-component [3 + 2] cycloaddition for preparing polycyclic scaffold 1 bearing tetrahydroquinazoline, pyrrolidine, pyrrolidinedione, and N-substituted maleimide rings. Those heterocyclic fragments could be found in bioactive compounds such as bromodomain, thrombin, potassium channel, mPGES-1, and tubulin inhibitors, as well as the immunomodulatory drug thalidomide [28-32] (Figure 1).

Our initial effort was focused on the development of reaction conditions for the one-pot double [3 + 2] cycloadditions. The first [3 + 2] cycloaddition of azomethine ylide was carried out using glycine methyl ester (3a), 2-azidobenzaldehyde (4a), and N-methylmaleimide (5a) as reactants [33]. After exploring the reactions with different temperatures, times, solvents, and bases, it was found that with a 1.2:1.1:1.0 ratio of 3a:4a:5a, Et3N as a base, and MeCN as a solvent, the three-component reaction for 2a was completed under microwave heating at 115 °C for 25 min. Without work-up, the reaction mixture was directly reacted with 1.0 equiv of N-benzylmaleimide (6a) under microwave heating at 125 °C for 25 min to give 7a as a major diastereomer of a denitrogenation compound in 74% LC yield with a 39:1 dr (Table 1, entry 5). The diastereomer 7a was isolated in 65% yield by preparative chromatography. The stereochemistry of the final product was established during the first [3 + 2] cycloaddition of the azomethine ylide which has been well reported in literature [22-27].

We next explored the reaction scope of the one-pot double [3 + 2] reactions under the optimized conditions by using different sets of building blocks of 3, 4, 5, and 6 to afford analogs 7a–p in 21–73% isolated yields as single diastereomers (Figure 2). Compound 7b was an exception, which was obtained in a trace amount. It was found that replacing maleimides 6 with other activated alkenes such as dimethyl maleate, benzoquinone, naphthalene-1,4-dione, and maleonitrile failed to afford products 7q–t, probably due to unfavorable stereoelectronic effects associated with these substrates.

The stereochemistry of 7h has been determined by X-ray single crystal structure analysis (Figure 3). As mentioned previously, the stereoselectivity of the first [3 + 2] cycloaddition for compounds 2 has been well reported [22-27]. The mechanism for the second [3 + 2] cycloaddition of azide compounds 2 with maleimides and sequential denitrogenation to products 7 is proposed in Scheme 2.

A one-pot reaction sequence involving [3 + 2] cycloaddition of azomethine ylides, [3 + 2] cycloaddition of azides with alkenes, and denitrogenation followed by a [5 + 1] anulation has been developed for the synthesis of fused-tetrahydroquinazolines as single diastereomers. The formation of triazoles from the second [3 + 2] cycloaddition readily affords denitrogenated 1,5-diamino compounds which are good substrates for aminomethylation with formaldehyde through a [5 + 1] annulation. The final products have a unique polycyclic skeleton containing tetrahydroquinazoline, pyrrolidine, pyrrolidinedione, and N-substituted maleimide ring systems.

General procedure for the one-pot synthesis of compounds 7

© 2016 Zhang et al.; licensee Beilstein-Institut.
This is an Open Access article under the terms of the Creative Commons Attribution License (http://creativecommons.org/licenses/by/4.0), which permits unrestricted use, distribution, and reproduction in any medium, provided the original work is properly cited.
The license is subject to the Beilstein Journal of Organic Chemistry terms and conditions: (http://www.beilstein-journals.org/bjoc) 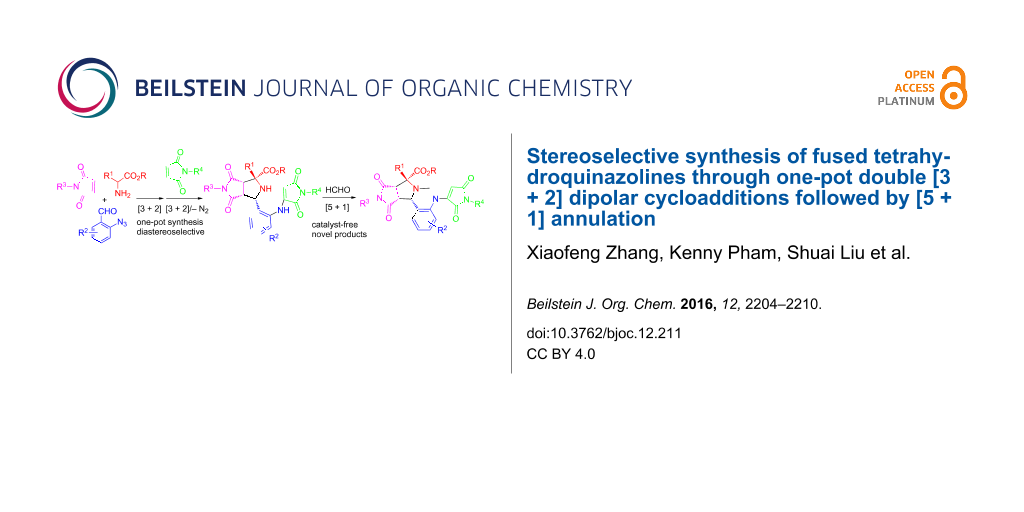