A modular approach to neutral P,N-ligands: synthesis and coordination chemistry


All articles from this author
Torsten Roth


All articles from this author
Clemens K. Blasius


All articles from this author
Sebastian N. Intorp


All articles from this author
Hubert Wadepohl


All articles from this author
Lutz H. Gade

This article is part of the Thematic Series "Organometallic chemistry". Dedicated to the memory of Peter Hofmann.

We report the modular synthesis of three different types of neutral κ2-P,N-ligands comprising an imine and a phosphine binding site. These ligands were reacted with rhodium, iridium and palladium metal precursors and the structures of the resulting complexes were elucidated by means of X-ray crystallography. We observed that subtle changes of the ligand backbone have a significant influence on the binding geometry und coordination properties of these bidentate P,N-donors.

P,N-ligands have been applied in a wide variety of chemical reactions ranging from hydrogenations [1,2] and allylic substitutions [3,4] to Heck reactions [5] and conjugate additions to enones [6]. Their popularity arises from the inherent electronic disparity of the phosphorus and the nitrogen donor groups, rendering one binding site a soft π-acceptor featuring a pronounced trans effect and the other site a hard σ-donor [7]. In addition, the steric and electronic properties of both donor groups can in principle be varied separately, rendering modular construction approaches particularly appealing [8].

Driven by our recent efforts to provide easily accessible, modular ligand families [9,10], we have explored three different possibilities to expand the portfolio of P,N-ligands (L1–L3, Figure 1). We reasoned that suitable candidates should be accessible on a multigram scale in excellent yields starting from commercially available reagents and ideally involving a maximum of two steps. In addition, the resulting ligand families should provide nitrogen and phosphorus donors with varying donor strength (amidine vs imine, phosphine vs heteroatom-bound phosphorus) and different bite angles (five- vs six-membered chelate rings).

We based the preparation of the ligand systems L1–L3 on a simple construction principle, i.e., only reactions of carbon- or nitrogen-nucleophiles with chlorophosphines, and condensations of amines with aldehydes were employed. For the synthesis of the N-phosphanylformamidine derivatives 2 and 3 we prepared a set of three aromatic formamidines (1a–c) starting from triethyl orthoformate and aromatic amines. Low-temperature lithiation of 1 and addition to achiral (R = Ph) and axially chiral (R2 = BINOL) chlorophosphines R2PCl gave ligands 2 and 3 in excellent yields (Scheme 1) [11]. If the correct stoichiometry is maintained throughout the reaction, the resulting mixtures do not require a purification step beyond a filtration from toluene or hexane to remove residual lithium chloride. As has been pointed out by Dyer et al. for the structurally related N-phosphanylamidines, there are several distinct conformers of ligands 2a–c and 3a–c that can exist in solution, depending on the orientation of the phosphorus lone pair, the geometry of the C=N double bond and the orientation of the substituents of the C–N single bond [12]. Notably, all synthesized derivatives feature a single signal in the 31P NMR spectrum at room temperature, indicating that a relatively fast interconversion of the different conformers occurs at ambient conditions. However, with increasing steric bulk of the aromatic nitrogen substituents, a substantial line broadening is observed, indicating the rise of the isomerization barrier through steric repulsion of the neighboring groups [11].

The methodology for the synthesis of compounds 2 and 3 was also applied to the preparation of phosphine imine ligand 5. Instead of a formamidine precursor, imine 4 was employed as the nucleophile. Deprotonation of 4 at low temperature and addition of the resulting C-nucleophile to chlorodiphenylphosphine gave the desired product in good yield (Scheme 2) [13]. This modification renders the phosphorus donor site more electron rich and also results in a more robust P–C bond compared to ligands 2 and 3.

For the preparation of ligand 7 the order of bond formations of the previous protocols was reversed, that means, the carbon–nitrogen bond was formed in the second step of the synthesis. Condensation of aldehyde 6 with mesitylamine gave ligand 7 in good yield [14-16].

The connectivity of the ligands 2, 3, 5 and 7 imposes a varying level of rigidity on these bidentate donors, with distinct consequences for their coordination chemistry (vide infra).

In the next step of our study we set out to explore the coordination chemistry and structural properties of the synthesized ligands with rhodium(I/III), iridium(I/III) and palladium(II) precursors. Reaction of ligands 2 and 3 with (i) preformed [Rh(cod)2]BF4 and (ii) stoichiometric amounts of [Ir(cod)Cl]2 in the presence of AgBF4 gave the corresponding rhodium(I) and iridium(I) complexes [2,3-M(cod)]BF4 in good to excellent yields (Scheme 3). In a similar fashion, analogous complexes of ligands 5 and 7 were prepared.

It should be noted that ligands 2, 5, and 7 feature a distinct shift of the 31P NMR resonance to lower fields upon complexation of a rhodium(I) or iridium(I) center, whereas a shift to higher fields is observed for ligand 3 [11]. We were able to obtain single crystals of compounds [2a-Rh(cod)]BF4, [2b-Rh(cod)]BF4, of the corresponding iridium complexes and of complexes [5-Rh(cod)]BF4, [5-Ir(cod)]OTf and [7-Rh(cod)]BF4 suitable for X-ray analysis by layering solutions of the complexes in dichloromethane with toluene and pentane. Instructive examples of the structural properties of selected complexes are illustrated in Figure 2. An overview of characteristic bonding properties of all crystallized compounds can be found in Table 1.

The five-membered metallacyclic derivatives of ligands 2 and 5 feature an almost planar κ2-P,N chelate ring with bite angles of approx. 81–82°. Notably, increasing the number of atoms that are part of the chelate ring leads to a slightly folded structure with only minor changes in the bite angle (87°). The nitrogen-attached aryl substituent typically displays an orientation which is perpendicular to the plane of the metallacycle [17]. The P–M bond lengths in all complexes are within the expected range of 2.23–2.27 Å, as are the metal−imine bonds (2.08–2.15 Å) [18,19]. The close structural resemblance between the rhodium and iridium complexes is notable and can be attributed to the similar atomic radii of these metals [20].

Moreover, the N–C–N angles of the formamidine unit closely resemble those found in related amidinium salts, thus indicating that no significant ring strain is present. The M−Ccod bonds located trans to the P atoms are slightly longer (av 2.11 Å) than the M−Ccod bonds trans to the imino group (av 2.04 Å), suggesting a dominant trans influence of the phosphorus donor function compared to the imino group. The differing bond lengths within the N−C−N unit (mean 1.30 vs 1.35 Å) may indicate little or no delocalization of the positive charge via the metallacycle. Remarkably, introduction of the sterically more demanding 2,6-di(isopropyl)phenyl group as the N-aryl substituent induced only slight structural changes (complexes of ligand 2a vs 2b), mostly in the orientation of the phenyl rings of the phosphorus donor and the position of the cyclooctadiene co-ligand.

To further explore the binding properties of the P,N-ligand scaffold, ligands 2a and 5 were reacted with the Lewis-acidic precursors [Cp*RhCl2]2 and [Cp*IrI2]2 (Figure 3). As has been pointed out for the analogous Rh(I) and Ir(I) compounds, complexation is accompanied by a 31P NMR shift to lower fields (from 49.7 ppm to 108.9 ppm and 80.6 ppm for the Rh(III) and Ir(III) complexes of 2a, respectively). The structures of [2a-Cp*IrI]BF4, and [5-Cp*IrI]BF4 were confirmed unambiguously by single-crystal X-ray diffraction. The solid-state structure of [2a-Cp*IrI]BF4 confirms the tetrahedral environment of the iridium center, rendering the two faces of the complex inequivalent (Figure 4, left). Similar findings were made for complex [5-Cp*IrI]BF4 (Figure 4, right). This is also reflected in the NMR spectra of both complexes, featuring a distinct set of resonances for each methyl group of the mesityl substituent.

Furthermore, due to the importance of palladium in common transition-metal-catalyzed transformations [21], we decided to explore the reactivity of the three P,N-ligand families with the widely used precursors [Pd(cod)Cl2] and [Pd(allyl)Cl]2 (Figure 5). Addition of ligand 2a to a solution of [Pd(cod)Cl2] in DCM gave complex [2a-PdCl2] in good yield. In the presence of AgBF4 complex [2a-PdCl2] was converted to the cationic palladium species [2a-PdCl]BF4, which is dimeric in the solid state [11]. Similarly, Pd(allyl) complexes of ligands 2a, 5 and 7 were obtained from mixtures of the respective ligand, [Pd(allyl)Cl]2 and AgBF4 or AgOTf as the chloride scavenger in DCM (Figure 5B).

We were able to obtain single crystals of [2a-PdCl2] and [5-Pd(2-Me-allyl)]OTf suitable for X-ray diffraction analysis (Figure 6). For an overview of metric parameters of all palladium complexes see Table 3.

The solid-state structures of [2a-PdCl2] (Figure 6, left) and its cationic congener [2a-PdCl]2(BF4)2 (Figure 5) show distinct similarities. Bond lengths and bond angles of the chelate ring agree well, underlining that halide abstraction is effectively compensated by the bridging chlorides (Table 3). Significant structural deviations are only observed for the Pd–Cl bonds, where significantly longer bonds were found for the cationic species (trans-nitrogen 2.31 Å vs 2.33 Å and trans-phosphorus 2.33 Å vs 2.42 Å). As has been observed for the corresponding rhodium and iridium complexes (vide supra), the structure of complex [5-Pd(allyl)]OTf is slightly folded, which is also accompanied by longer P–Pd and N–Pd bonds (cf. Table 2 and Table 3).

The work described in this paper shows that three related neutral κ2-P,N-ligand families L1–L3 are accessible via straightforward condensation protocols. All ligand classes can be synthesized starting from cheap, commercially available reagents on a multigram scale. Notably, relatively small changes in the ligand backbone, i.e., C/N-exchange or increasing the chelate ring size, have a significant impact on the ligand geometry and its coordination properties. Thus, complexes of L1 with rhodium, iridium and palladium form planar chelate rings, structures based on L2 are slightly folded, whereas complexes of L3 exhibit a strong deviation from planarity. In summary, these results may be utilized for the design, preparation and structural elucidation of novel late transition metal complexes. Investigations into their potential as precatalysts for organic transformations are currently underway in our laboratory and will be reported in due course.

General procedure for the preparation of ligands 2, 3 and 5

To a solution of the formamidine or imine (15.0 mmol, 1.0 equiv) in 150 mL of THF at −78 °C was added dropwise a solution of tert-butyllithium in pentane (15.0 mmol, 1.0 equiv, 1.9 M). The reaction was left at this temperature for 30 min, warmed to rt and stirred for 1 h. This mixture was added to a solution of the chlorophosphine (15.0 mmol, 1.0 equiv) in 150 mL of THF at −78 °C, stirred for 30 min at this temperature and warmed to rt overnight. The solvent was removed under reduced pressure and the residue was taken up in 300 mL of toluene. The mixture was then filtered through a plug of Celite© and the solvent was evaporated in vacuo yielding the desired product which was used without further purification in the subsequent metalation steps. For compound numbering and the preparation of ligand 7, see Supporting Information File 1.

We gratefully acknowledge the award of a Ph.D. grant to T. R. from the Landesgraduiertenförderung (LGF Funding Program of the state of Baden-Württemberg), the award of a national scholarship (Deutschlandstipendium) to V. V., C. K. B and S. N. I., and the University of Heidelberg for generous funding.

© 2016 Vasilenko et al; licensee Beilstein-Institut.
This is an Open Access article under the terms of the Creative Commons Attribution License (http://creativecommons.org/licenses/by/2.0), which permits unrestricted use, distribution, and reproduction in any medium, provided the original work is properly cited.
The license is subject to the Beilstein Journal of Organic Chemistry terms and conditions: (http://www.beilstein-journals.org/bjoc) 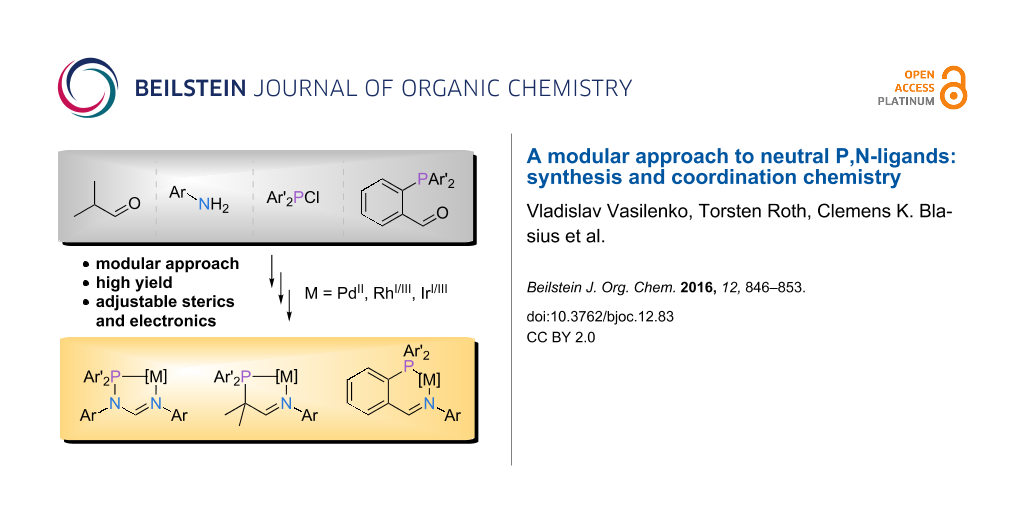