All articles from this author
Mizuki Yamada


All articles from this author
Atsuya Muranaka


All articles from this author
Misae Kanai


All articles from this author
Naoki Kakusawa


All articles from this author
Daisuke Hashizume


All articles from this author
Masanobu Uchiyama


All articles from this author
Shuji Yasuike

The parent benzophospholo[3,2-b]indole was prepared by the reaction of dichlorophenylphosphine with a dilithium intermediate, which was prepared in two steps from 2-ethynyl-N,N-dimethylaniline. Using the obtained benzophosphole-fused indole as a common starting material, simple modifications were carried out at the phosphorus center of the phosphole, synthesizing various functionalized analogs. The X-ray structure analysis of trivalent phosphole and phosphine oxide showed that the fused tetracyclic moieties are planar. The benzophosphole-fused indoles, such as phosphine oxide, phospholium salt, and borane complex, exhibited strong photoluminescence in dichloromethane (Φ = 67–75%).

The chemistry of phospholes, fully unsaturated five-membered heterocyclic rings containing a phosphorus element, has drawn much attention in terms of the development of synthetic methods and elucidation of its spectroscopic properties for applications in organic field-effect transistors (OFETs) and luminescent materials [1-9]. The phosphorous atom of trivalent phosphorus compounds has a high chemical reactivity. Therefore, several reactions on the phosphorus atom such as oxidation, alkylation, and coordination to a Lewis acid can produce the corresponding phosphole derivatives with different electronic properties [10-17]. Phosphole-based ladder-type π-conjugated heteroacenes were shown to exhibit a high charge mobility and/or fluorescence quantum yields [18-24]. For example, dibenzo-fused phospholo[3,2-b]phosphole dioxides (Figure 1A) [25,26] and benzophosphole-fused tetracyclic heteroacenes, containing boron (B) [27-29], silicon (Si) [30], oxygen (O) [31], and sulfur (S) [32-34] (Figure 1B), were synthesized and their physical properties were studied. However, to the best of our knowledge, the synthesis of benzophosphole-fused indole derivatives as tetracyclic heteroacenes has not been reported. In 2015, Lu et al. reported the synthesis of only one phosphole and indole-fused pentacyclic heteroacene [35]. Recently, we reported simple and efficient synthetic routes to benzothiophene-fused benzoheteroles containing the group 15 and 16 elements using the ring-closing reaction of dilithium compounds with electrophiles bearing heteroatoms [36]. In continuation of our research, we were interested in the synthesis, molecular structure, and physicochemical properties of the parent benzophosphole-fused indole derivative and its various functionalized analogs such as the corresponding phosphine oxide, phosphonium salt, and borane–phosphine complex.

The synthesis of the parent tetracyclic molecule 10-phenyl-[1]benzophospholo[3,2-b]-N-methylindole (3), is shown in Scheme 1. The key precursor 2 was synthesized by I2-mediated electrophilic cyclization of 2-ethynyl-N,N-dimethylaniline 1 [36,37]. Treatment of compound 2 with n-butyllithium in anhydrous THF at −78 °C and subsequently with PhPCl2 resulted in ring closure, affording the desired benzophospholo[3,2-b]indole 3 in 66% yield.

Then, the chemical modification of the phosphorus atom of 3 was carried out and the results are shown in Scheme 2. The treatment of 3 with hydrogen peroxide, elemental sulfur, and elemental selenium afforded the corresponding phosphine oxide 4, sulfide 5, and selenide 6, respectively. The reaction of 3 with methyl triflate afforded phospholium triflate 7. Phosphole 3 was treated with chloro(dimethyl sulfide)gold in CH2Cl2, resulting in P-complexation and thus affording the gold complex 8. The borane complex 9 was readily prepared from 3 by treating with borane in THF.

The photophysical properties of the benzophospholo[3,2-b]indoles were evaluated using UV absorption and fluorescence spectroscopy in CH2Cl2. The spectra are shown in Figure 3, and the photophysical data are shown in Table 2. The functionalized phosphole derivatives 4–8 showed absorption maxima (λabs) at 299–307 nm and a broad absorption at ≈355 nm. In contrast, parent phosphole 3 showed narrow absorption peaks at 320, 343, and 357 nm. Additionally, these compounds exhibited very little solvent dependence (see Supporting Information File 1, Figure S2). Phosphine oxide 4 exhibited blue fluorescence with the maximum emission (λem) at 450 nm. The quantum yield (Ф = 75%) was high, comparable to that of phosphole and indole-fused pentacyclic heteroacene (Ф = 70%) [35]. On the other hand, a low fluorescence intensity was observed for phosphine sulfide 5 and selenide 6 (Ф = 1% and 0.3%, respectively). Quenching of fluorescence emission due to a soft sulfur substituent has been reported for several phosphine sulfide (P=S) compounds [10,15,17,20]. The cationic phospholium 7 exhibited green fluorescence (λem = 465 nm) with the largest red shift of this series of phospholes owing to the cationic nature of the phosphorus atom, providing particularly strong electron-accepting properties. This red shift related to methylation of a phosphorus atom is in line with other earlier studies [10,18,33]. The fluorescence intensity of 7 (Ф = 67%) was as strong as that of phosphine oxide 4. The gold and boron complexes (8 and 9, respectively) showed contrasting fluorescence properties with respect to the intensity. Complex 9 exhibited a high quantum yield (Ф = 75%), while complex 8 exhibited a weak emission (Ф = 11%). In these fluorescence spectra of compounds 4–7, a vibronic band was detected as a shoulder peak around 530 nm. In the case of phosphonium cation 7, the corresponding vibronic band was seen in the absorption spectrum at 330–340 nm.

Density functional theory (DFT) calculations [38] were carried out at the B3LYP/LanL2DZ level of theory. The HOMO and LUMO energies of the selected compounds are given in Table 3. For fluorescent compounds 3, 4, 7, and 9, the HOMO and LUMO correspond to the π and π* orbitals of the benzophospholoindole skeletons, respectively (Figure 4). Both the HOMO and LUMO energy levels in the functionalized phosphole derivatives 4 and 9 are lower than the parent phosphole 3 owing to the increased electron deficiency of the phosphorus center. Because of the cationic nature of the phosphorus center, the energy levels in cationic phospholium 7 are significantly stabilized. In contrast to the fluorescent phospholes, calculations show that the HOMO and HOMO−1 of nonfluorescent phosphole sulfide 5 and selenide 6 have a large contribution from the lone-pair orbitals on the S and Se atoms, respectively, and the HOMO−2 is delocalized over the conjugated π-system (Figure 5). According to the time-dependent DFT calculations for 5 and 6, the S0 → S1 transitions are mainly dominated by the dipole-forbidden HOMO–LUMO (lp–π*) transition; this may be associated with the low fluorescence quantum yields.

aDFT calculation at the level of B3LYP/LanL2DZ. bCation part only.

A series of novel indole-fused phospholes were synthesized by simple chemical modifications at the trivalent phosphorus center. These organophosphorus compounds generated a whole series of derivatives from only one precursor. The X-ray crystal analysis of benzophospholo[3,2-b]indoles showed that the nitrogen atoms are sp2 hybridized and the phosphorus atoms adopt pyramidal and tetrahedral geometry. A significant characteristic of the benzophosphole-fused indole derivatives is that the corresponding phosphine oxide, the phospholium salt, and the borane complex showed a high fluorescence emission. Further investigations are underway to develop functional materials including electronic devices and evaluate the physicochemical properties of these compounds by synthetic, theoretical, and spectroscopic studies.

This research was supported by a research grant from the Institute of Pharmaceutical Life Sciences, Aichi Gakuin University and Hokuriku University. The DFT calculations were performed on the RIKEN Integrated Cluster of Clusters (RICC) and HOKUSAI GreatWave. We gratefully acknowledge the Advanced Center for Computing and Communication, RIKEN for providing computational resources.

© 2017 Matsumura et al.; licensee Beilstein-Institut.
This is an Open Access article under the terms of the Creative Commons Attribution License (http://creativecommons.org/licenses/by/4.0), which permits unrestricted use, distribution, and reproduction in any medium, provided the original work is properly cited.
The license is subject to the Beilstein Journal of Organic Chemistry terms and conditions: (http://www.beilstein-journals.org/bjoc) 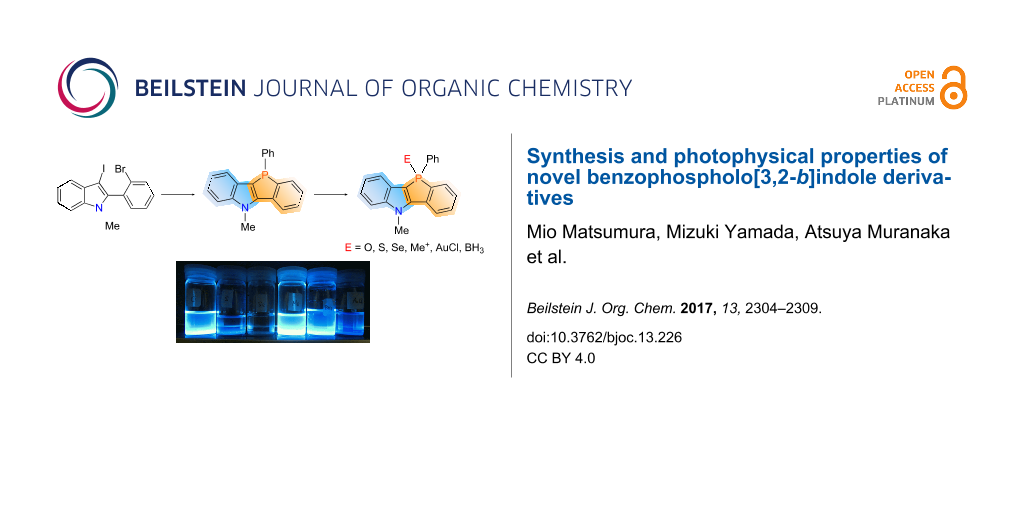