All articles from this author
Neil Vasdev

Continuous-flow microfluidics has shown increased applications in radiochemistry over the last decade, particularly for both pre-clinical and clinical production of fluorine-18 labeled radiotracers. The main advantages of microfluidics are the reduction in reaction times and consumption of reagents that often result in increased radiochemical yields and rapid optimization of reaction parameters for 18F-labeling. In this paper, we report on the two-step microfluidic radiosynthesis of the high affinity partial agonist of the serotonin 1A receptor, [18F]FEMPT (pKi = 9. 79; Ki = 0.16 nM) by microfluidic radiochemistry. [18F]FEMPT was obtained in ≈7% isolated radiochemical yield and in >98% radiochemical and chemical purity. The molar activity of the final product was determined to be >148 GBq/µmol (>4 Ci/µmol).

The development of serotonin 1A receptor (5-HT1AR) agonist radiotracers for applications in molecular imaging with positron emission tomography (PET) has been avidly sought over the past two decades, albeit with limited success. The current status of serotonin-targeting radiopharmaceuticals was recently reviewed by Paterson et al. [1] and their conclusion was that “the development of PET and single-photon emission computed tomography (SPECT) radioligands to image serotonergic targets is of high interest, and successful evaluation in humans is leading to invaluable insight into normal and abnormal brain function”. A further review by us focusing on 5-HT1AR overviewed a number of PET and SPECT tracers that have been tested in vivo with varying efficacy [2]. A few representative compounds which show the structures that have been tested as radiotracers are shown in Figure 1.

The 5-HT1AR is implicated in the pathophysiology of a variety of neuropsychiatric and neurodegenerative disease states as well as in the mechanism of action of antidepressants. The 5-HT1AR exists in low and high agonist affinity states. The antagonist ligands have similar affinity to the low affinity (LA) and high affinity (HA) conformations of 5-HT1AR. However, agonist ligands prefer binding to the HA state of the receptor. This is coupled to G-protein and thus agonist binding gives a more meaningful functional measure of the 5-HT1AR that can reflect desensitization and supersensitivity. Significant research has been directed at the differences between agonist and antagonist binding to 5-HT1A receptors in Alzheimer's disease [10] and this interest has led to the development of a high-resolution in vivo atlas for four of the human brain's serotonin receptors and transporters [11].

Antagonist 5-HT1AR PET tracers can detect the total receptor binding, but not modifications in the high affinity 5-HT1AR binding in disease states or in the context of treatment functionally larger and earlier effects of antidepressants. The development of 5-HT1AR agonist PET tracers for the past 2 decades has met with limited success. An arylpiperazine derivative of 3,5-dioxo-(2H,4H)-1,2,4-triazine radiolabeled with carbon-11 (t½ = 20.4 min), [11C]MPT, is the first successful agonist PET tracer reported for 5-HT1AR in non-human primates. The binding of [11C]MPT in baboon brain was in excellent agreement with the known distribution of the 5-HT1AR. Despite the excellent binding profile of [11C]MPT, the slow washout in baboons limits this radiotracer from advancing to human studies. Our recent efforts have focused on the development of fluorine-18 (t½ = 109.7 min) labelled MPT derivatives, as the longer half-life enables imaging protocols that can provide a better match of the pharmacokinetics of binding to the half-life of the radionuclide, as well as simplified radiochemistry protocols and the long-term goal of distribution for multicenter clinical trials.

Several reports on the use of continuous flow microfluidics for radiofluorination have shown higher yields, with less amount of reagents and shorter reaction times compared to traditional vessel-based techniques [12]. Microfluidic techniques also allow for cost-effective and rapid optimization of reaction parameters for new radiotracers as simultaneous reactions can be carried out. We have recently shown that continuous flow microfluidics is suitable for 18F-radiopharmaceutical production studies [13] and have applied this technique in human PET imaging studies [14]. Herein we present the microfluidic synthesis and evaluation of [18F]FEMPT as an agonist PET ligand for 5-HT1AR.

Synthesis and binding affinity of FEMPT

Desmethyl-MPT, the radiolabeling precursor, was synthesized as described previously [15]. The reference standard FEMPT (7) was synthesized in 70% by reacting desmethyl-MPT (6) with 1-bromo-2-fluoroethane in the presence of K2CO3 (Scheme 1 and Supporting Information File 1).

The in vitro binding assays to establish the potency and selectivity of FEMPT towards 5-HT1AR and various other biogenic amines, brain receptors, and transporters were evaluated by the National Institute of Mental Health Psychoactive Drug Screening Program (NIMH-PDSP). FEMPT shows 0.2 nM binding affinity (Ki) to 5-HT1AR. The next closest bindings for MPT are Sigma2 PC12, H1, 5-HT7, and 5-HT1B (Table 1) and are >50 times higher than 5-HT1AR. The Ki values for several other brain receptors and transporters were low (0.1 to 10 μM). Agonist properties of FEMPT on 5-HT1AR were estimated by [35S]GTPγS binding in membranes of CHO cells which stably express human 5-HT1AR. A dose-dependent increase in [35S]GTPγS binding was induced by FEMPT. Maximal FEMPT stimulated [35S]GTPγS binding Emax was 100% of that seen with 5-HT and an EC50 of 85 nM.

Reaction optimization of radiofluorination methods vary depending on the microfluidic systems being used but we can typically optimize 18F-labeling reaction conditions in one or two days from a single batch of [18F]fluoride. This is significantly more efficient than classical vial-based radiofluorination methods which, generally involves several experimental days and analysis as each reaction, including azeotropic drying of [18F]fluoride, must be carried out individually. The microfluidic radiosynthesis of [18F]FEMPT was optimized by treating the reactions as 2 individual steps, using the Discovery mode of the Advion NanoTek® microfluidic synthesizer [16]. The first step is the preparation of the labeling reagent [18F]fluoroethyltosylate (10) via tetraethylammonium fluoride ([18F]TEAF). The second step is the reaction of the [18F]fluoroethyltosylate (10), with the FEMPT precursor 8 (Scheme 2).

The final product was then purified on a Phenomenex Luna column, 10 × 250 mm, 5 μm, with a mobile phase of 55% MeCN: 45% 10 mM phosphate at a flow rate of 5 mL/min. The HPLC fraction containing the product was collected and diluted with 20 mL of sterile water for injection, then this diluted solution was trapped on a HLB SPE light cartridge, washed with 10 mL of water, eluted from the HLB cartridge with 1 mL ethanol and diluted with 10 mL of 0.9% NaCl solution (saline). [18F]FEMPT was obtained in ≈7% isolated radiochemical yield and in >98% radiochemical and chemical purity. The identity of the radiotracer was confirmed by co-injection with the standard (see Supporting Information File 1). The use of microfluidics allowed the optimization of the radiosynthesis in one day. The molar activity of the final product was determined to be >148 GBq/µmol (>4 Ci/µmol) by both UV spectroscopy and mass spectrometry methods and both methods were found to be in agreement. The chemical purity was determined using both UV spectroscopy and mass spectrometry and little chlorinated (<0.1%) and no elimination product was seen by mass spectrometry.

To determine the products being formed during the radiosynthesis the final formulation was analyzed by LC–MS using 1 mL of the final product solution trapped on a concentration system, which consists of the replacement of the injection loop with a trapping cartridge (Valco Instruments Co. Inc, Houston, TX, Fingertight cartridge assembly #SFECH412, packed with Waters HLB SPE packing material) and the rest of the system remains as standard for the chromatography system. In the UV chromatogram observed on the HPLC system from the direct injection almost no signal is observed. However, when 1 mL of the solution of the purified radiotracer was injected via the trapping system, the UV traces indicate the presence of a number of species with retention times close to the desired product (Figure 3).

A number of the observed impurities were able to be identified using LC–MS and the major impurities observed were the expected elimination product and the hydroxy product. However, all of these materials were below the mass seen for the desired FEMPT and the combined signals were used in the molar activity calculation. Also seen was the presence of tetrabutylammonium salt, which appeared through the semi-preparative purification and the reformulation step. However, the signal for the tetrabutylammonium salt corresponds to <10 µg/mL.

In summary, [18F]FEMPT was efficiently synthesized by continuous flow microfluidics. This protocol is generally applicable for the implementation of a suitable microfluidic process to optimize classical 18F-radiofluorination reactions. Preclinical PET imaging studies with this radiotracer are underway.

© 2017 Collier et al.; licensee Beilstein-Institut.
This is an Open Access article under the terms of the Creative Commons Attribution License (http://creativecommons.org/licenses/by/4.0), which permits unrestricted use, distribution, and reproduction in any medium, provided the original work is properly cited.
The license is subject to the Beilstein Journal of Organic Chemistry terms and conditions: (http://www.beilstein-journals.org/bjoc) 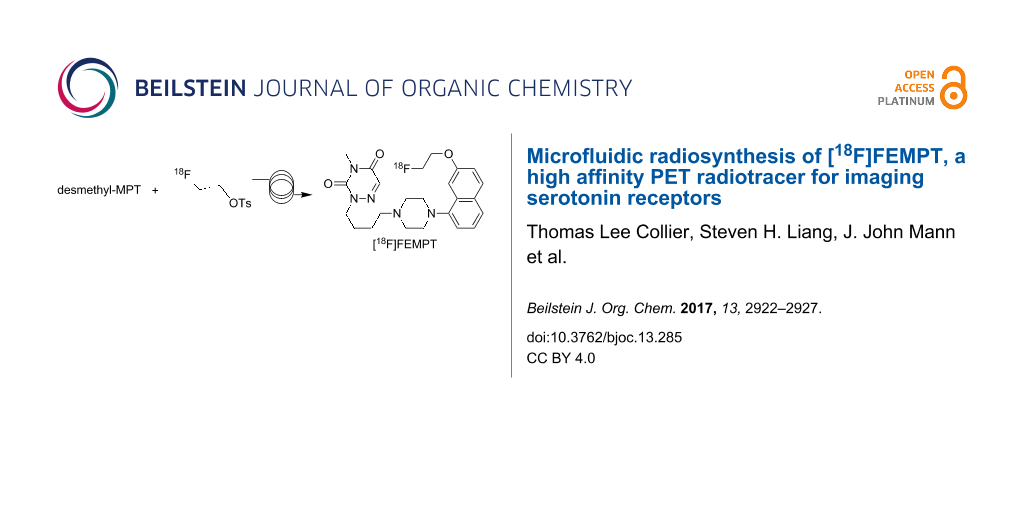