All articles from this author
Ramón Badorrey


All articles from this author
José A. Gálvez


All articles from this author
María D. Díaz-de-Villegas

New pyrrolidine-based organocatalysts with a bulky substituent at C2 were synthesized from chiral imines derived from (R)-glyceraldehyde acetonide by diastereoselective allylation followed by a sequential hydrozirconation/iodination reaction. The new compounds were found to be effective organocatalysts for the Michael addition of aldehydes to nitroolefins and enantioselectivities up to 85% ee were achieved.

In the first decades of the 21st century, the enantioselective organocatalysis has witnessed a tremendous development [1-4] and it is now considered to be the third pillar of enantioselective catalyses together with metal complex-mediated catalysis and biocatalysis. Among the different structures usually found in organocatalysis, the five-membered secondary amine structure of pyrrolidine has proven to be a privileged motif [5] with a powerful capacity in aminocatalysis [6-10]. In this context diarylprolinol silyl ethers have proven to be extremely efficient organocatalysts for a wide variety of chemical transformations [11].

In the course of our research we have been involved in the synthesis of new tuneable catalytic motifs to be used in organocatalysis starting from the chiral pool. Highly modular chiral aminodiol derivatives were obtained by the addition of organometallic reagents to chiral imines derived from (R)-glyceraldehyde – which is easily accessible from D-mannitol – and these were evaluated as chiral organocatalysts in the enantioselective α-chlorination of β-ketoesters, with excellent results obtained after optimisation of the organocatalyst structure [12].

In an effort to identify new, easily accessible and tuneable organocatalysts with the privileged pyrrolidine motif from the chiral pool, we have now focused on the synthesis of new chiral pyrrolidines capable of creating a sterically demanding environment due to the presence of a bulky 2,2-disubstituted-1,3-dioxolan-4-yl moiety at C2 from chiral imines derived from (R)-glyceraldehyde. The Michael addition of aldehydes to nitroolefins was selected as a model reaction to evaluate the effectiveness of the new pyrrolidine-based organocatalysts in aminocatalysis.

We reasoned that pyrrolidines of type C with a bulky 2,2-disubstituted-1,3-dioxolan-4-yl moiety at C2 could provide the appropriate environment to lead to high levels of enantioselectivity in asymmetric transformations in which enamine intermediates are formed. The substituent R1 in the 1,3-dioxolane moiety in pyrrolidines C could be varied to modulate the reactivity and selectivity of the new organocatalysts.

The sequential hydrozirconation/iodination of chiral homoallylic amines has been described as a straightforward approach to enantiomerically pure 2-substituted pyrrolidines [13,14]. Therefore we decided to test this methodology to gain access to the pyrrolidine ring in compound C. The required chiral homoallylic amines B can be easily obtained by the addition of allylmagnesium bromide to imines derived from (R)-glyceraldehyde acetonides A (Figure 1) according to our previously described methodology [15]. The configuration at C2 of the pyrrolidine ring would be determined in the diastereoselective allylation of the starting chiral imines.

The homoallylic amine 1 with syn-configuration was obtained by the reaction of the corresponding imine with allylmagnesium bromide as previously described [15]. The amine 1 was reacted with the Schwartz reagent in CH2Cl2 at room temperature to afford the hydrozirconated intermediate, which was immediately treated with iodine to yield N-benzylpyrrolidine 2 in 69% isolated yield. The subsequent exposure of compound 2 to molecular hydrogen in the presence of Pd(OH)2/C as a catalyst afforded the desired organocatalyst OC1 in 73% yield (Scheme 1).

The same reaction sequence led to organocatalyst OC2 in 52% overall yield starting from homoallylic amine 3 having anti-configuration, which was obtained by reaction of the corresponding BF3·OEt2 pre-complexed imine with allylmagnesium bromide as previously described [15] (Scheme 2). It is worth mentioning that the starting homoallylic amines 1 and 3 can be obtained on a multigram scale from the chiral pool.

In addition another new organocatalyst, OC11, with a different bulky substituent at C2 in the pyrrolidine moiety was prepared. Reacting diol 7 with 1,3-dichlorotetraisopropyldisiloxane in the presence of imidazole and subsequent hydrogenolysis of the benzylcarbamate with molecular hydrogen in the presence of catalytic Pd/C (Scheme 5) afforded OC11 in 43% overall yield for the two steps.

With this series of pyrrolidines at hand, the well-established Michael addition of aldehydes to nitroolefins [16-18] was selected as a benchmark reaction to study their behaviour as organocatalysts. Compounds with a related structure prepared from proline by Diez et al. have proven to work well as organocatalysts in the Michael addition of cyclohexanones to nitrostyrenes [19,20].

We first tested organocatalysts OC1–OC4 in the reaction of trans-β-nitrostyrene with 3-phenylpropionaldehyde in order to determine the influence that the relative configuration of the pyrrolidine had on the results (Table 1). The reaction was initially carried out at room temperature in the presence of 10 mol % of the catalyst and using CH2Cl2 as solvent. Under these conditions the yield of the Michael adducts was 95–99% within 7 hours. The diastereoselectivity was moderate (dr = 70:30–78:22) in favour of the syn-diastereoisomer and enantioselectivites were ee ≈ 68% for the syn-adducts and ee = 44–63% for the anti-adducts. The stereochemistry of the major compound depended on the stereochemistry of the organocatalyst and Michael adducts of opposite configuration were obtained on using syn or anti-pyrrolidines with similar levels of enantioselectivity for the major syn-diastereoisomer.

Next, the effect of the solvent and temperature was studied using OC4 as the organocatalyst (Table 2). The best results were obtained with methylcyclohexane as the solvent at 0 °C reaction temperature. Under these conditions after 24 h the reaction yield was high (87%), the observed diastereoselectivity was 92:8 in favour of the syn-adduct and the enantioselectivity reached 85% ee for the major syn-adduct. A further decrease in temperature did not improve these results substantially but did diminish the reaction yield (Table 2).

aReaction performed using 0.2 mmol of β-nitrostyrene, 0.4 mmol of 3-phenylpropionaldehyde and 10 mol % of OC4 in the given solvent (2 mL). bDetermined from the crude reaction mixture by 1H NMR spectroscopy using 1,3,5-trimethoxybenzene as internal standard. cDetermined by chiral HPLC.

The organocatalysts OC1–OC11 were then screened to reveal the influence of the substituent R attached to the dioxolane moiety on the reaction outcome and the results are collected in Table 3. However, the variation of this substituent did not result in any significant improvement of the diastereo- or enantioselectivity and based on these results organocatalyst OC4 was found to be the most efficient and stereoselective organocatalyst. It is worth mentioning that on reducing the catalyst loading to 5 mol % the reactivity remained good and the diastereoselectivity and enantioselectivity were only slightly affected.

It has been reported that additives present in the reaction medium can lead to improved results without changing other reaction conditions [21]. For example, in secondary amine-catalysed asymmetric reactions a Brønsted acid additive was found to accelerate the formation of the enamine intermediate and thus to improve not only the reactivity but also the diastereoselectivity and enantioselectivity [22,23]. On the other hand, the presence of thiourea additives could activate nitroalkenes when used as substrates by double hydrogen bonding, which lead to improved reactivities [24]. Based on these findings, we decided to explore the effect of a Brønsted acid or an achiral thiourea as additive on the reaction between trans-β-nitrostyrene and 3-phenylpropionaldehyde promoted by OC4 (Table 4). When thioureas were used as additives the reaction was performed in toluene in order to improve the solubility.

Finally, we considered the possibility of accelerating the formation of the enamine intermediate and simultaneously activating the nitroalkene by using a combination of organocatalyst OC4, a Brønsted acid and an achiral thiourea. Thus the reaction was repeated in the presence of a combination of benzoic acid and N,N'-diphenylthiourea (TU1) as additives. The enantioselectivity of both syn and anti-adducts reached quite good values (87% ee and 91% ee, respectively) but the diastereoselectivity dropped to 67:33.

aReaction performed using 0.2 mmol of β-nitrostyrene, 0.4 mmol of 3-phenylpropionaldehyde, 10 mol % of OC4, 10 mol % of N,N'-diphenylthiourea, and 10 mol % of the given benzoic acid in toluene (2 mL) at 0 °C for 24 h. bDetermined from the crude reaction mixture by 1H NMR spectroscopy using 1,3,5-trimethoxybenzene as internal standard. cDetermined by chiral HPLC.

Finally, with the most efficient organocatalyst OC4 at hand we surveyed the scope of this transformation with respect to the aldehyde and the nitroolefin (Table 6). Other aliphatic aldehydes were less reactive and the reaction temperature had to be increased. Linear aliphatic aldehydes reacted with β-nitrostyrene to provide the Michael adducts in good yields when the reaction was conducted at room temperature. The diastereoselectivity was moderate to good (dr = 79:21–95:5) in favour of the syn-diastereoisomer and enantioselectivites ranged from 75–84% ee. The reaction of butyraldehyde with other trans-β-nitroolefins at room temperature also provided the Michael adducts with moderate to good distereoselectivity (dr = 74:26–92:8) in favour of the syn-diastereoisomer and enantioselectivites from 72–84% ee.

In conclusion, we have prepared 2-substituted pyrrolidines using a hydrozirconation/iodination reaction of chiral homoallylic amines. The latter were obtained on a multigram scale from imines derived from glyceraldehyde. These easily available compounds are new tuneable organocatalysts with the privileged pyrrolidine motif. When used in the asymmetric Michael addition of aldehydes to nitroolefins, diastereoselectivities of up to 93:7 and enantioselectivities of up to 85% enantiomeric excess for the syn-adduct were obtained in the presence of the most effective organocatalyst OC4.

© 2017 Castán et al.; licensee Beilstein-Institut.
This is an Open Access article under the terms of the Creative Commons Attribution License (http://creativecommons.org/licenses/by/4.0), which permits unrestricted use, distribution, and reproduction in any medium, provided the original work is properly cited.
The license is subject to the Beilstein Journal of Organic Chemistry terms and conditions: (http://www.beilstein-journals.org/bjoc) 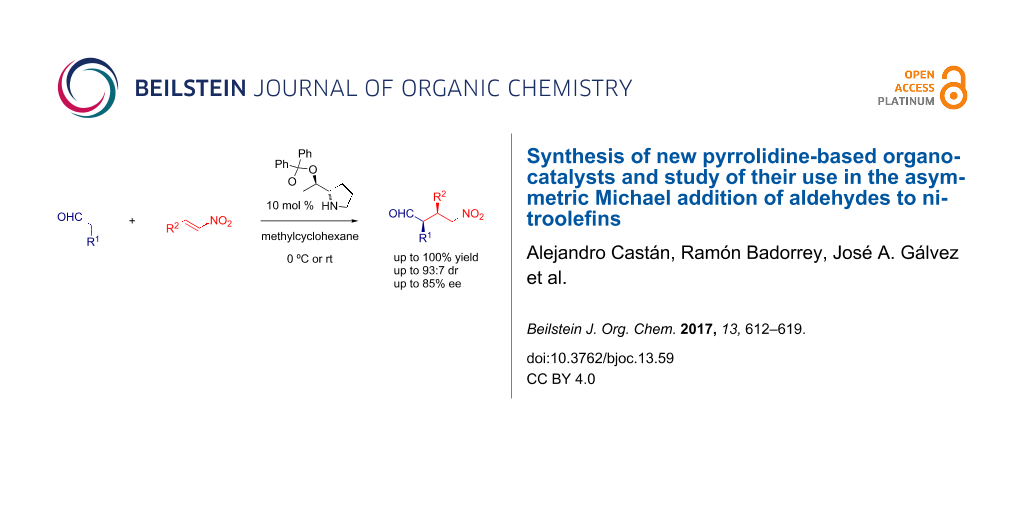