All articles from this author
Liang Chen


All articles from this author
Jing Pan


All articles from this author
Weicheng Zhou

In order to prepare asymmetrically (R)-(+)-1-(5-bromopentyl)-1-methyl-7-methoxy-2-tetralone (3a), a key intermediate of dezocine, 17 cinchona alkaloid-derived catalysts were prepared and screened for the enantioselective alkylation of 1-methyl-7-methoxy-2-tetralone with 1,5-dibromopentane, and the best catalyst (C7) was identified. In addition, optimizations of the alkylation were carried out so that the process became practical and effective.

The preparation of enantiomerically pure compounds has become a stringent requirement for pharmaceutical synthesis [1]. In this context, asymmetric catalysis is probably one of the most attractive procedures for the synthesis of active pharmaceutical ingredients (APIs) due to environmental, operational, and economic benefits.

Phase-transfer asymmetric catalysis with cinchona alkaloid-derived quaternary ammonium compounds has become one of the topics in stereoselective synthesis in both industry and academia [6-9]. It was reported [10] that the alkylation of 2 in the catalysis of N-(p-trifluoromethylbenzyl)cinchonidinium bromide in a two-phase system gave the enantioselective product 3a, although the ee value of the product was 60%, determined by 1H NMR. And so far, no further report on the stereoselective alkylation of 2a was found. (Some reports on the non-stereoselective alkylation of 2 were given in references [11,12]). In this paper, several cinchona-derived phase-transfer catalysts were screened for this reaction, and the structure–activity relationship for the catalysis was studied. In addition, optimizations had been made to make the process efficient.

In the beginning, the alkylation of 2 in the catalysis of C1 in the two-phase system (toluene and 50% NaOH aqueous solution) was tested, although the yield was moderate (60.1%, entry 1 in Table 1), the enantiomeric ratio (3a:3b) was only 55:45. When the benzyl in C1 was replaced by the bulky groups, such as methylnaphthalene or methylanthracene, neither the enantiomeric ratio was improved (Table 1, entry 2) nor the reaction took place (Table 1, entry 3). Subsequently, when the groups substituted at the para-position on the benzyl group were investigated, the structure–activity relationship showed that catalyst C4 (with methyl substituent) did not work for the reaction (Table 1, entry 4) and those with Cl or F (C5 and C6) worked well with an improvement in enantiocontrol (Table 1, entries 5 and 6). Fortunately, the p-CF3 derivative (C7) promoted the reaction to give a enantiomeric ratio of 83:17 (Table 1, entry 7). These findings suggested that the presence of electron-withdrawing groups on the benzyl group was favourable for the enantioselective reaction except the case of a nitro group (Table 1, entry 8). And then, the catalysts with a di-substituted benzyl group were examined. C9 with 3.4-dichlorobenzyl resulted in a slightly higher enantiomeric ratio (68:32) than C5 (Table 1, entry 9). But, neither C10 nor C11 (Table 1, entries 10 and 11) were as good as the mono-substituted counterparts (C6 and C7). The derivatives (C12–C15) of C7, the best one so far, were further studied. When the hydroxy group in C7 was protected by an allyl or a propargyl group, racemic product was obtained (Table 1, entries 12 and 13). This suggested that the free hydroxy group in C7 was crucial to guarantee the stereoselectivity. Meanwhile, the good catalysis was maintained with both dihydrocinchonidine-derived C14 and dehydro compound C15. Finally, the quaternary ammonium group from quinine was examined (Table 1, entries 16 and 17), and C16 and C17 gave the result inferior to the cinchonidine derivatives (C7 and C11).

aConcentration of compound 2 (5 g). bThe volume ratio of aqueous solution and organic solvent was 1:10. cIsolated yield including 3a and 3b. dThe enantiomeric ratio was determined by HPLC using a chiral column (Daicel chiral AY-H) with hexane/isopropyl alcohol 90:10 as the eluent, detected at 280 nm. eThe volume of 50% aq NaOH was decreased to 5% of the volume of PhCl. f90 g of 2 was added.

On the base of the above experimental results, a catalytic mechanism was proposed (Scheme 3). Compound 2 is deprotonated by sodium hydroxide into an anion in the organic layer. The anion goes to the interface between chlorobenzene and water, where it interacts with the quaternary ammonium group of catalyst C7. The distance between two molecules is getting close by the attraction between charges, then two additional interaction forces in the complex are produced on the same plane, including: 1) the carbonyl of 2 makes a hydrogen bond with the hydroxy group of C7; 2) the phenyl group of 2 forms a face-to-face π-stacking interaction with the benzyl moiety of C7. The complex of 2 with C7 goes to the organic phase. Due to the sterical hindrance from the benzyl group, the alkylation by 1,5-dibromopentane takes place at the opposite side of the benzyl group of C7 to afford 3a.

In summary, an enantioselective synthesis of (R)-(+)-1-(5-bromopentyl)-1-methyl-7-methoxy-2-tetralone (3a), a key intermediate of dezocine, in the catalysis of the quaternary ammonium benzyl bromides from cinchonidine was investigated and the best catalyst (C7) was identified. In addition, the preparation of 3a with the optimized conditions was performed and the product was isolated in 77.8% yield with an enantiomeric ratio of 79:21. This method can be easily performed in large scale. In addition, the structure–activity relationships for the cinchona alkaloids catalysts were elucidated.

All solvents and reagents were of commercial sources and used without further purification. Melting points were determined on a Büchi Melting Point M-565 apparatus and are uncorrected. 1H and 13C NMR spectra were recorded using a Bruker 400 MHz spectrometer with TMS as an internal standard. Mass spectra were recorded with a Q-TOF mass spectrometer using electrospray positive ionization (ESI+). The enantiomeric ratio was determined by HPLC using a chiral column (Daicel chiral AY-H) with (hexane/isopropyl alcohol 90:10) as eluents, detected at 280 nm. Specific rotations were determined on a Rudolph Research Analytical automatic polarimeter IV. All reactions were monitored by TLC, which were carried out on silica gel GF254. Column chromatography was carried out on silica gel (200–300 mesh) purchased from Qindao Ocean Chemical Company of China.

The above-obtained product underwent subsequent cyclization, oximation and reduction according to the literature [10] (without resolution) to get compound 6a, and then 6a was transformed to dezocine with 23.0% overall yield and 100% purity. The mp, optical rotation value, MS and 1H NMR of the product were consistent with those in the literature [4,10].

A novel and practical asymmetric synthesis of eptazocine hydrobromide

© 2018 Li et al.; licensee Beilstein-Institut.
This is an Open Access article under the terms of the Creative Commons Attribution License (http://creativecommons.org/licenses/by/4.0), which permits unrestricted use, distribution, and reproduction in any medium, provided the original work is properly cited.
The license is subject to the Beilstein Journal of Organic Chemistry terms and conditions: (https://www.beilstein-journals.org/bjoc) 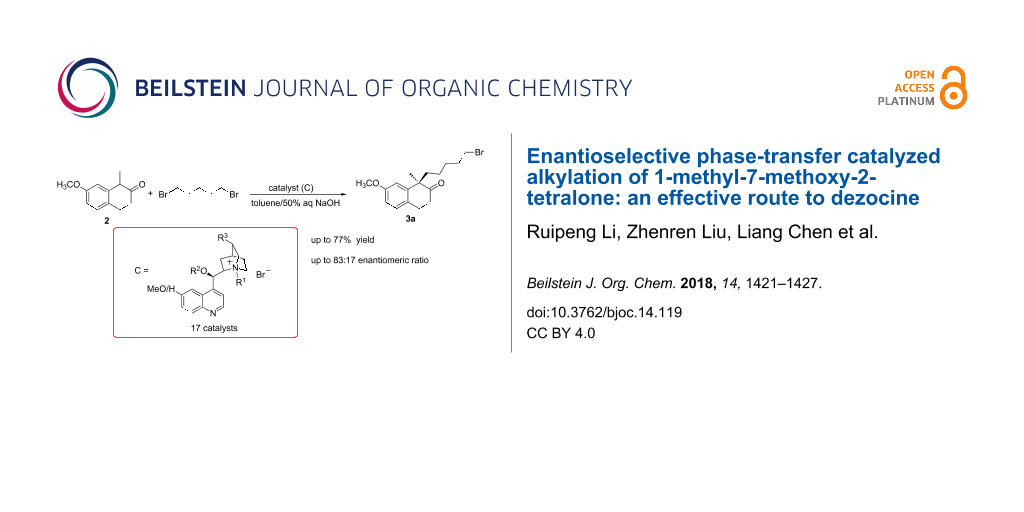