All articles from this author
Xiaohua Zhen


All articles from this author
Huaibin Ge


All articles from this author
Guangtao Zhang


All articles from this author
Xuechan An


All articles from this author
Yunfei Du

The trifluoromethyl group is a striking structural motif, which can be widely found in the fields of pharmaceutical and agrochemical sciences. The introduction of this functional group in drug molecules can enhance their chemical and metabolic stability, improve their lipophilicity and bioavailability, and increase protein-binding affinity [1-6]. In this regard, the CF3 group has been introduced into many pharmaceutical agents [7-16]. For example, fluoxetine hydrochloride (Figure 1, A) [4,9,10] (Prozac®, an antidepressant and a selective serotonin reuptake inhibitor for the treatment of major depressive disorders, obsessive–compulsive disorders, etc.), teriflunomide (Figure 1, B) [11-13] (Aubagio®, the active metabolite of leflunomide for the treatment of multiple sclerosis), and pleconaril (Figure 1, C) [14-16] (an antiviral drug), all possess this privileged substituent. Although many useful synthetic methods [17-21] have been established for introducing the CF3 group into various organic molecules, the further development of novel routes for the selective trifluoromethylation is of continuing interest for synthetic and medicinal chemists.

Togni reagents, including 1-(trifluoromethyl)-1,2-benziodoxol-3(1H)-one (1) and trifluoromethyl-1,3-dihydro-3,3-dimethyl-1,2-benziodoxole (1’, Figure 2), are effective and efficient hypervalent iodine reagents for trifluoromethylation reactions of a variety of substrates [22,23]. These reagents have found wide applications in the area of organofluorine chemistry, synthetic method development as well as medicinal chemistry [24-40]. For example, the Togni reagents have been successfully applied to introduce the CF3 group into pharmaceutical agents such as the fluoxetine derivative D (Figure 1), the mefloquine derivative E [41] and compound F [42] – a potential anti-HIV drug bearing a NCF3 moiety.

2H-Azirines are a class of highly strained and reactive molecules containing a C–N double bond. The exclusive framework can be found in some natural products [43-47], which were shown to possess antibiotic activities [43,44]. Furthermore, compounds with this structural motif are also useful building blocks for the synthesis of functionalized amino derivatives and N-containing heterocyclic derivatives [48-51]. Thus, this class of compounds has gained considerable attention from synthetic chemists and many useful synthetic approaches [52-55] have been developed for accessing this exclusive class of heterocycles. In our previous works, we have realized the application of hypervalent iodine reagents for the construction of the 2H-azirine skeleton starting from enamines 2 via intramolecular oxidative cyclization (Scheme 1) [56,57]. When the R2 substituent is alkyl or aryl, the corresponding substrates 2 were converted to a series of alkylated or arylated 2H-azirines 3 in the presence of phenyliodine diacetate (PIDA) in 1,2-dichloroethane (DCE) [56]. Alternatively, the treatment of β-unsubstituted enamine substrates (2, R2 = H) with PhIO in 2,2,2-trifluoroethanol (TFE) afforded 2-trifluoroethoxy-2H-azirines 4 [57]. The latter process involves an intermolecular oxidative trifluoroethoxylation and the subsequent oxidative intramolecular azirination. In continuation of our interest in the construction of the 2H-azirine skeleton bearing versatile substituents, we herein report that the biologically interesting CF3 group can be incorporated into the privileged 2H-azirine framework through the Togni reagent 1-mediated trifluoromethylation followed by PhIO-mediated azirination in a one-pot process.

It is well documented that Togni reagents can realize the direct trifluoromethylation of alkenes [58-60] and electron-rich enamides [61]. Inspired by this, we envisaged that Togni reagent 1 could also enable the introduction of a CF3 group to the β-position of enamine substrates, and the so-obtained trifluoromethylated enamines could undergo a hypervalent iodine-mediated intramolecular azirination to give the corresponding trifluoromethylated 2H-azirines [56,57]. To test this conversion, the readily available enamine 5a was used as a model substrate. The treatment of 5a with Togni reagent 1 in the presence of CuI in N,N-dimethylformamide (DMF) [62] at room temperature for two hours afforded the β-trifluoromethylated enamine 6a in a 23% yield. Subjecting enamine 6a to PhIO in 1,2-dichloroethane (DCE) for 12 hours at room temperature led to the formation of the desired β-trifluoromethylated 2H-azirine 7a in a yield of 60% (Scheme 2).

In order to make the synthesis of β-trifluoromethylated 2H-azirine more concise and convenient, we were keen to probe whether the two-step synthesis could be combined into a one-pot process. For this purpose, we first carried out the reaction of Togni reagent 1 and 5a in the presence of CuI in DMF at room temperature, followed by an addition of PhIO. However, only trace amounts of the expected product 7a were obtained (Table 1, entry 1). We next screened various solvents to increase the reaction outcome (Table 1, entries 1–4). Judging by the yield of the desired product, it was concluded that DCE was the best solvent (Table 1, entry 3). By increasing the reaction temperature from rt to 60 °C, the yields significantly increased to 55% (Table 1, entries 3, 5 and 6). However, an attempt to improve the product yield by operating the reaction at a higher temperature was unsuccessful (Table 1, entry 7). Replacing the catalyst CuI with other commonly used copper catalysts including CuCl, CuBr and CuOAc led to a decreased yield in each case (Table 1, entries 8–10). In addition the other commonly employed hypervalent iodine(III) reagents, namely, PIDA and phenyliodine bis(trifluoroacetate) (PIFA) were tested, but the results indicated that they were ineffective to further improve the yields (Table 1, entries 11 and 12).

With the optimized conditions in hand, we next explored the substrate scope for this newly established one-pot oxidative trifluoromethylation and azirination reaction. As shown in Scheme 3, a variety of substrates bearing halogen substituents at the ortho, meta and para-positions of the phenyl ring in the substrates were converted to the expected 2H-azirines 7b–e in 45–65% one-pot yield. Notably, the substrate having a trifluoromethyl group at the meta-position in the phenyl ring also afforded the desired 2H-azirine product 7f bearing two CF3 substituents in a satisfactory one-pot yield. Various enamine substrates with electron-donating groups (p-Me, o-Me and 3,4-di-OMe) in the aryl ring, also reacted efficiently under the conditions of the one-pot process to afford the corresponding products 7g–i in a yield of 40–67%. Furthermore, when replacing the methoxycarbonyl group in 5a with a cyano or N-methyl-N-phenylformyl group, the corresponding substrates 5j and 5k were converted to the desired products 7j and 7k in a yield of 49% and 57%, respectively. The methoxy group in the ester moiety could also be replaced by the n-butoxy group, with the desired product 7l being isolated in a yield of 62%. In addition, this method was also applicable to substrates bearing naphthyl or thienyl groups at R substitution to give the desired products 7m and 7n in a yield of 43% and 45%, respectively. However, the method was not applicable to the substrate bearing an alkyl group, as the reaction of 5o, even at lower temperatures (−20 °C, 0 °C, 20 °C and 40 °C) gave a complex mixture after adding PhIO.

To gain further insights into the reaction mechanism, 2,2,6,6-tetramethyl-1-piperidinyloxy (TEMPO), a well-known radical scavenger, was introduced to the model reaction (Scheme 4) following the method previously reported in the literature [63]. It was found that the trifluoromethylation was hampered and the TEMPO-CF3 adduct 8 was formed as a major product based on the analysis of its 19F NMR (δ −55.67).

The above results from the experiment provided supportive evidence that the CF3 radical was likely involved as a reactive species in the reaction process. Based on this and previous reports [62-68], a possible reaction pathway has been proposed and is outlined in Scheme 5. Initially, CuI catalytically activates the Togni reagent 1, leading to the formation of the CF3-containing radical intermediate 9. Decomposition of the intermediate 9 produces (2-iodobenzoyloxy)copper(II) iodide (10) [65,66] with the simultaneous release of a CF3 radical. Then, the reaction of enamine 5a with the CF3 radical affords the carbon-centered radical 11. Next, the reaction of 10 and 11, possibly through an electron-transfer process, along with the conversion of intermediate 10 to 2-iodobenzoic acid enables the conversion of intermediate 11 to 6a (possibly tautomerized from its imine isomer) [69]. Finally, the β-trifluoromethylated enamine 6a undergoes intramolecular azirination affording the corresponding β-trifluoromethylated 2H-azirine via a known pathway [56,57].

In summary, we have reported an efficient hypervalent iodine-mediated trifluoromethylation and azirination process. In this transformation, the introduction of the CF3 group to the β-position of enamines followed by the intramolecular azirination was realized in a one-pot process, providing a general and straightforward access to biologically interesting trifluoromethylated 2H-azirine compounds. This method features mild reaction conditions, a simple operation, and metal-free characteristics. The presence of both, the biologically interesting CF3 group and the 2H-azirine skeleton in the products obtained might making them interesting for further applications in biological studies.

We acknowledge the National Natural Science Foundation of China (No. 21472136) and Tianjin Research Program of Application Foundation and Advanced Technology (15JCZDJC32900) for their financial support. We also thank Ms Jeanette Mar [School of Health Science Platform, Tianjin University] for editing the English version in this paper.

© 2018 Sun et al.; licensee Beilstein-Institut.
This is an Open Access article under the terms of the Creative Commons Attribution License (http://creativecommons.org/licenses/by/4.0), which permits unrestricted use, distribution, and reproduction in any medium, provided the original work is properly cited.
The license is subject to the Beilstein Journal of Organic Chemistry terms and conditions: (https://www.beilstein-journals.org/bjoc) 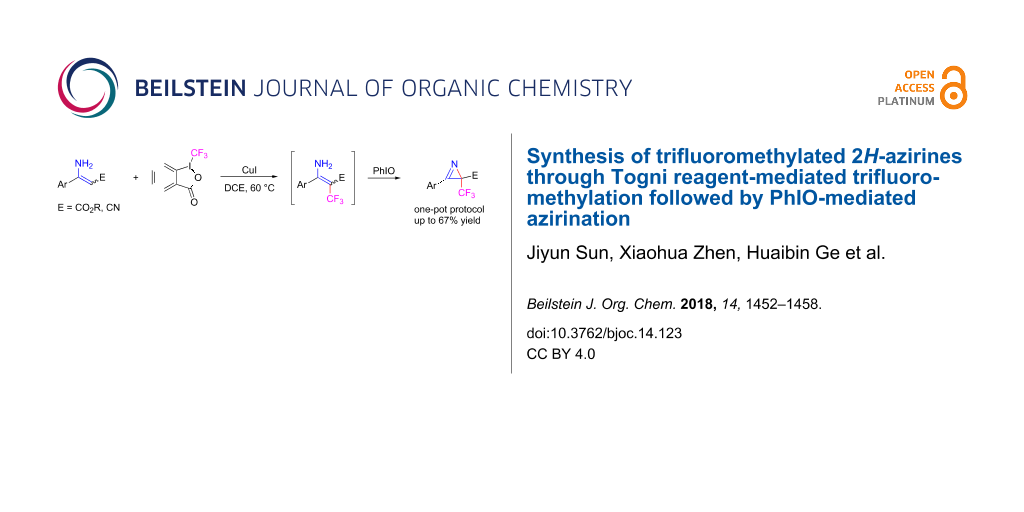