All articles from this author
Luisa Pisano

The application of heterogeneous catalysis and green solvents to the set up of widely employed reactions is a challenge in contemporary organic chemistry. We applied such an approach to the synthesis and further conversion of tetrahydropyranyl ethers, an important class of compounds widely employed in multistep syntheses. Several alcohols and phenols were almost quantitatively converted into the corresponding tetrahydropyranyl ethers in cyclopentyl methyl ether or 2-methyltetrahydrofuran employing NH4HSO4 supported on SiO2 as a recyclable acidic catalyst. Easy work up of the reaction mixtures and the versatility of the solvents allowed further conversion of the reaction products under one-pot reaction conditions.

Due to their general stability to a wide range of reagents and ease of removal, tetrahydropyranyl (THP) ethers are widely employed in multistep organic synthesis for the protection of hydroxy derivatives [1,2]. In addition, they can be converted into a wealth of useful functional groups [2,3], and found employment as fragrances or pro-fragrances in everyday life [4-7]. Although a lot of work has been devoted to the search of low impact, heterogeneous and recyclable catalysts to promote THP ethers synthesis [2,8-14], to the best of our knowledge no attention was dedicated to their employment in low impact solvents.

From this point of view, it is worth noting that although ethers are the solvents of choice for reactions involving highly polar nucleophilic reagents such as organolithium and organomagnesium compounds or aluminium hydrides, tetrahydropyranylation reactions are usually run in hydrocarbons, chloroalkanes or dipolar aprotic solvents [1,2,8-15], thus affording a paradigmatic example of the ironic Murphy’s Law of Solvents, recently stated by Jessop et al. [16]: “The best solvent for any process step is bad for the next step”.

Starting from these premises and following our interest in the development of reaction procedures in low impact solvents [17,18], we report here on the tetrahydropyranylation of alcohols and phenols in cyclopentyl methyl ether (CPME) and 2-methyltetrahydrofuran (2-MeTHF) in the presence of heterogeneous acidic catalysts. Indeed, both CPME [19-22] and 2-MeTHF [21-25] are characterized by relatively high boiling points, a narrow explosion range, hydrophobicity, easy drying and recovery possibilities. Additionally, CPME is produced via a 100% atom economical reaction [19,20], whilst 2-MeTHF is accessible from renewable resources [21,23]. Finally, it is worth noting that besides being moderately irritant, both solvents are characterized by low toxicities and are considered negative for genotoxicity and mutagenicity [26-28]. Due to these environmentally friendly characteristics, CPME and 2-MeTHF appear as versatile green alternatives to ethereal solvents such as tetrahydrofuran, dioxane, diethyl ether or methyl tert-butyl ether.

Aiming to the development of a particularly practical and environmentally friendly procedure to the generation of THP ethers, we devoted our efforts to the employment of heterogeneous acidic catalysts [29,30] in order to set up conditions allowing easy processing of the reaction mixtures and, possibly, the recovery and recycling of the catalyst.

Taking 2-phenylethanol (1a) as a model compound, we investigated its conversion into the corresponding THP ether 3a by reacting 4 M solutions of this alcohol with a slight excess (1.1 equiv) of 3,4-dihydro-2H-pyran (2, DHP) in the presence of several acidic heterogeneous catalysts (Scheme 1 and Table 1). The recovered reaction mixtures were very simply elaborated by filtering the catalyst followed by evaporation of the solvent in vacuo.

aAll reactions were run at rt during 4 h in the presence of the catalyst (3 mol % of 1a, unless otherwise indicated). bAs determined by 1H NMR analyses of crude reaction mixtures; no other product was detected besides 1a. c1a/catalyst = 3 wt %. dComparable results were obtained after 4 times recycling of the catalyst. eNo reaction was observed in the presence of a comparable amount of carefully dried SiO2. f3 mol ‰ of 1a.

No reaction occurred in both solvents in the absence of an acidic catalyst as well as in the presence of several ammonium salts, i.e., NH4Cl, NH4Br and NH4H2PO4 (Table 1, entries 1–4). On the other hand, inorganic salts with a relatively higher acidity, i.e., NH4HSO4, NaHSO4 and KHSO4 [31], as well as Amberlyst 15 and Montmorillonite K10, efficiently promoted practically quantitative conversion of the starting material into the corresponding tetrahydropyranyl ether 3a within a few hours in both solvents (Table 1, entries 5–9).

Good results were also obtained with a 25 wt % dispersion of NH4HSO4 over SiO2 (NH4HSO4@SiO2, Table 1, entries 10 and 11). Additionally, the supported catalyst, which can be stored in a desiccator for several months with no detrimental effects, is particularly easy to recover and was recycled up to 4 times with no evident loss of activity (Table 1, entry 10). Its robustness was further assessed by the good qualitative matching between the IR spectra of the fresh and recycled catalysts (see Supporting Information File 1, Figure S1). Additionally, it is worth noting that a comparable result was obtained by reducing the amount of catalyst to one tenth (3 mol ‰ of 1a, Table 1, entry 12).

Finally, both CPME and 2-MeTHF proved stable towards such an acidic supported catalyst, as established by the absence of any decomposition product within the reaction mixtures, as determined by 1H, 13C NMR and gas-liquid chromatography analyses [32].

Due to the ease of the preparation from particularly cheap starting materials, the ease of handling and its high activity, we further investigated the ability of NH4HSO4@SiO2 to catalyze the synthesis of different THP ethers in low impact ethereal solvents. Accordingly, the reactions were performed in the presence of 3 mol ‰ of the catalyst and were successfully applied to the synthesis of a series of THP ethers of functionalized and non-functionalized alcohols and phenols, including some known fragrances (3g–j and 3l) [4-7], as illustrated in Scheme 2.

Conversions exceeding 95% were achieved under the mild conditions illustrated in Scheme 2 with primary aliphatic and benzylic alcohols 1b–h. A notable exception is the low conversion of 4-bromobenzyl alcohol 1e in CMPE, most probably due to the low solubility of the starting material in this solvent. This disadvantage was easily overcome by performing the reaction in 2-MeTHF.

More demanding conditions (2.0 equiv of 2) were required to obtain good conversions of a secondary alcohol, i.e, (1R,2S,5R)-2-isopropyl-5-methylcyclohexanol ((−)-menthol, 1i). The reaction afforded an almost 1:1 mixture of only two diastereoisomers as determined by 1H and 13C NMR analysis of the crude reaction mixture, thus suggesting that it occurs with no epimerization at C1.

This result was confirmed by submitting compound 3i to acid-catalyzed deprotection with H2SO4@SiO2 (25 wt % [33] as depicted in Scheme 3). Alcohol 1i, was recovered as a single stereoisomer, identical to the commercially available starting material, as determined by 1H and 13C NMR analysis of the crude reaction mixture (see Supporting Information File 1).

Finally, the tetrahydropyranylation of a tertiary alcohol 1j as well as of phenols 1k and 1l required, besides the employment of 2.0 equiv of DHP, relatively longer reaction times and higher temperatures. It is worth noting that under our mild reaction conditions we did not observe any isomerisation of the acid-sensitive allylic alcohol 1j [34].

To stress the usefulness of a tetrahydropyranylation reaction performed in a green ethereal solvent and in the presence of a heterogeneous acidic catalyst, we realized two one-pot procedures employing either 2-MeTHF or CPME as a solvent.

Accordingly, the mixture obtained by reacting 1f with 1.1 equiv of 2 and 3 mol ‰ of NH4HSO4@SiO2 in 2-MeTHF under dry Ar was filtered and dropwise added to a vigorously stirred freshly prepared solution of EtMgBr in the same solvent at rt. Aqueous work-up and flash chromatography afforded the desired tertiary alcohol 4fa in 78% yield (Scheme 4).

Under similar conditions, protection of 1f in CPME, followed by filtration and dropwise addition of the resulting solution to a suspension of LiAlH4 in the same solvent, afforded the monoprotected diol 4fb in almost quantitative yield (Scheme 5).

The above reported results show that several heterogeneous acidic catalysts efficiently promote the tetrahydropyranylation of an alcoholic model compound in low impact ethereal solvents under mild conditions. Further investigations show that NH4HSO4@SiO2, easily prepared from inexpensive starting materials, successfully catalyzes the protection of a variety of functionalized and non-functionalized alcohols and phenols, including an optically pure alcohol with no detrimental effects on its stereochemistry. Due to a particularly simple work-up procedure, NH4HSO4@SiO2 can be easily recovered and recycled several times. The easy removal of the acidic catalyst from the reaction mixtures and the versatility of the employed solvents allowed the successful further conversion of the reaction products with strong nucleophiles under one-pot conditions.

© 2018 Azzena et al.; licensee Beilstein-Institut.
This is an Open Access article under the terms of the Creative Commons Attribution License (http://creativecommons.org/licenses/by/4.0), which permits unrestricted use, distribution, and reproduction in any medium, provided the original work is properly cited.
The license is subject to the Beilstein Journal of Organic Chemistry terms and conditions: (https://www.beilstein-journals.org/bjoc) 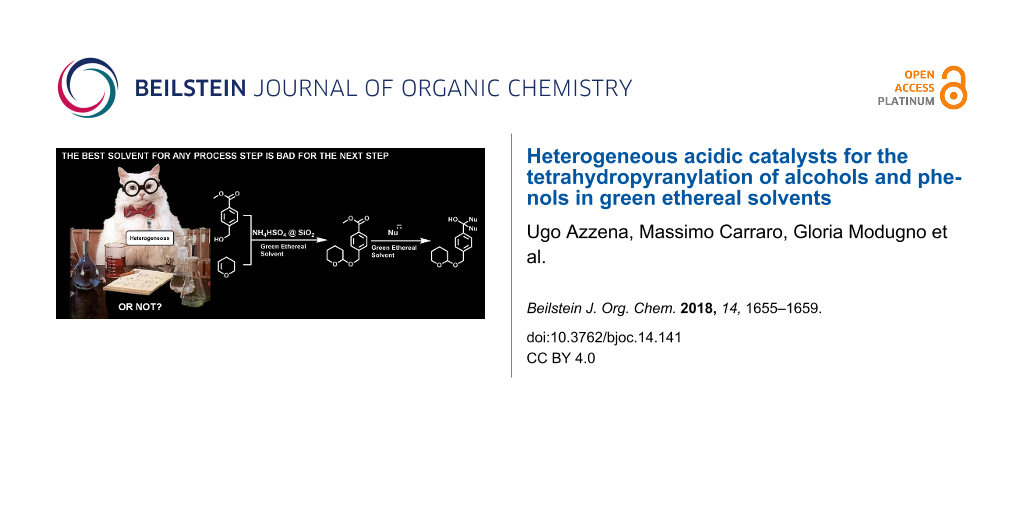