All articles from this author
Takeru Jo


All articles from this author
Masahiro Terada

A cationic cobalt catalyst efficiently promoted the reaction of N-alkoxycarbonyloxyanilines at 30 °C, affording the corresponding ortho-aminophenols in good to high yields. As reported previously, our mechanistic studies including oxygen-18 labelling experiments indicate that the rearrangement of the alkoxycarbonyloxy group proceeds in [1,3]-manner. In this article, we discuss the overall picture of the cobalt-catalysed [1,3]-rearrangement reaction including details of the reaction conditions and substrate scope.

The 2-aminophenol moiety is ubiquitously found as a core structure of biologically active compounds, such as tigecycline [1], iguratimod [2], and phosalone (Scheme 1) [3]. The scaffolds have also been frequently utilized as synthetic intermediates not only in pharmaceutical chemistry but also in materials science. Thus, it is of great importance to efficiently synthesize functionalized 2-aminophenols under mild reaction conditions in a regioselective manner. Among numerous methods, the [3,3]-rearrangement of O-acyl-N-arylhydroxylamines 1 driven by cleavage of the N–O bond is an ideal approach to selectively synthesize O-protected 2-aminophenols 2 while maintaining the oxidation state during the transformation (Scheme 2a) [4-11]. However, there is a significant drawback, these [3,3]-rearrangements of carboxylic acyloxy and alkoxylcarbonyloxy groups generally require long heating times at elevated reaction temperatures (>140 °C) or microwave irradiation (Scheme 2a). In contrast, N-sulfonyloxyanilines are known to readily undergo the [3,3]-rearrangement during the preparation of the starting material below −20 °C due to the strongly electron-withdrawing nature of the sulfonyl group (Scheme 2b) [12]. Accordingly, we envisioned that appropriate Lewis acidic metal catalysts would promote the rearrangement reaction of stable N-acyloxyanilines to afford readily deprotectable 2-acyloxyanilines under much milder reaction conditions with high functional group tolerance. Based on this concept, we disclosed that cationic cobalt catalysts efficiently promote the reaction of O-alkoxylcarbonyl-N-arylhydroxylamines 1 at 30 °C, affording the corresponding 2-aminophenol derivatives 2 in good to high yields [13]. Our mechanistic studies revealed that the rearrangement of the alkoxycarbonyloxy group proceeded in an unprecedented [1,3]-manner (Scheme 2c). In this article, we describe the overall picture of the intriguing [1,3]-rearrangement reaction, particularly the detail of the reaction, which were not sufficiently discussed in our preliminary communication.

aYields were determined by 1H NMR using CH2Br2 as an internal standard. Isolated yield in parenthesis. bReported in the Supporting Information of our previous paper [13], except for yields of recovered 1a.

aYields were determined by 1H NMR using CH2Br2 as an internal standard. bReported in the Supporting Information of our previous paper (ref. [13]), except for yields of recovered 1a. cFor 5 days.

The reaction was applied to 1o–ab having various substituents at the para-position, as summarized in Table 4. As reported previously [13], reactive functional groups, such as bromo, iodo, and alkynyl groups were tolerated, affording the desired products in good to high yields (Table 4, entries 5–7). The substrate 1v having a methoxycarbonyl group afforded 2v in good yield, while cyano and acetyl groups interrupted the present reaction presumably due to deactivation of the catalyst, recovering the starting materials quantitatively (Table 4, entries 9 and 10). Notably, our catalytic conditions successfully promoted the rearrangement of 1y’, having a highly electron-deficient p-trifluromethylphenyl group, which have not been employed in the thermal [3,3]-rearrangement reaction, when using a p-nitrobenzyloxycarbonyl group in place of Cbz as the migrating group (Table 4, entry 11). In addition, compatibility of the protective group on the oxygen atom was tested (Table 4, entries 12–14), since it is expected that the cationic cobalt would make the protective group labile as well as the protective group would deactivate the cationic cobalt catalyst. As results, tert-butyldimethylsilyl (TBS) and methoxymethyl (MOM) groups were tolerated under the cationic cobalt-catalyzed reaction conditions to afford the desired product in good yields (Table 4, entries 13 and 14). The reaction using a benzoyl group was sluggish, affording the desired product 2z in moderate yield with formation of inseparable byproducts (Table 4, entry 12). Thus, the use of silyl- and acetal-type protective groups is suitable for the present reaction.

aThe reactions of 1 (0.4 mmol) were conducted in the presence of 10 mol % CoCl2 and 20 mol % of AgSbF6 in DCE (1.6 mL) at 30 °C. bIsolated yield. cPreviously reported in [13]. d1H NMR yield using dibromomethane as an internal standard. See Supporting Information File 1 for details. eThe starting material was quantitatively recovered. fYield brsm (28% of 1y’ was recovered). gIsolation of 2z was unsuccessful due to contamination by inseparable byproducts (see Supporting Information File 1).

As reported previously [13], the fact that the present rearrangement reaction proceeds in a [1,3]-manner was confirmed by a crossover experiment and oxygen-18 labeling experiments. That is, the reaction of a 1:1 mixture of equally-reactive substrates 1h and 1r under the standard reaction conditions afforded only the products 2h and 2r derived from the starting materials (Scheme 3a). Thus, we confirmed that the present reaction proceeds in an intramolecular manner. Next, 18-oxygen-labelling experiments were conducted using substrate 1h-18O, of which the oxygen-18 content at the hydroxylamine oxygen atom was 62% [16,17]. The reaction of 1h-18O in the presence of the cationic cobalt catalyst at 30 °C followed by hydrogenative cleavage of the Cbz group afforded the phenol 4h-18O, of which the oxygen-18 content was 64% (Scheme 3b). The result clearly indicates that the rearrangement of the CbzO group in the presence of cationic cobalt catalysts proceeds in a concerted [1,3]-manner [18-24]. In addition, the reaction of 1h-18O (23% 18O) in the absence of the cationic cobalt catalyst at 140 °C followed by hydrogenative deprotection afforded 4h, of which the oxygen-18 content was less than 2% (Scheme 3c). Therefore, we concluded that the cationic cobalt catalyst not only made the reaction much milder than the thermally-induced reaction but also changed the rearrangement mode to an unprecedented [1,3]-manner. In addition, intermolecular and intramolecular competitive experiments using deuterium-labelled substrates resulted in no kinetic effect (Scheme 4). These results suggest that the C–O bond would form prior to cleavage of the C–H bond in the [1,3]-rearrangement reaction.

Due to the fact that the reaction of 1a in the presence of tri- and tetravalent cationic metal catalysts afforded the para-isomer 3a as a major product (Table 1, entries 14–18), the reaction of ortho-aminophenol derivative 2a in the presence of catalytic amounts of RuCl3 and AgSbF6 was conducted. However, the para-isomer 3a was not afforded; 73% of 2a was recovered (Scheme 5a). The result indicates that the para-isomer 3a was not formed through the ortho-isomer 2a. It is assumed that 3a was furnished through direct C–O bond formation at the para-position through ionic cleavage of the N–O bond by cationic Ru(III) as a much stronger Lewis acid, while it is also possible that the second migration of the alkoxycarbonyloxy group from ortho to para occurs prior to proton transfer (Scheme 5b) [25]. Further mechanistic studies are underway in our laboratory.

An aniline dication-like transition state in the Bamberger rearrangement

© 2018 Nakamura et al.; licensee Beilstein-Institut.
This is an Open Access article under the terms of the Creative Commons Attribution License (http://creativecommons.org/licenses/by/4.0). Please note that the reuse, redistribution and reproduction in particular requires that the authors and source are credited.
The license is subject to the Beilstein Journal of Organic Chemistry terms and conditions: (https://www.beilstein-journals.org/bjoc) 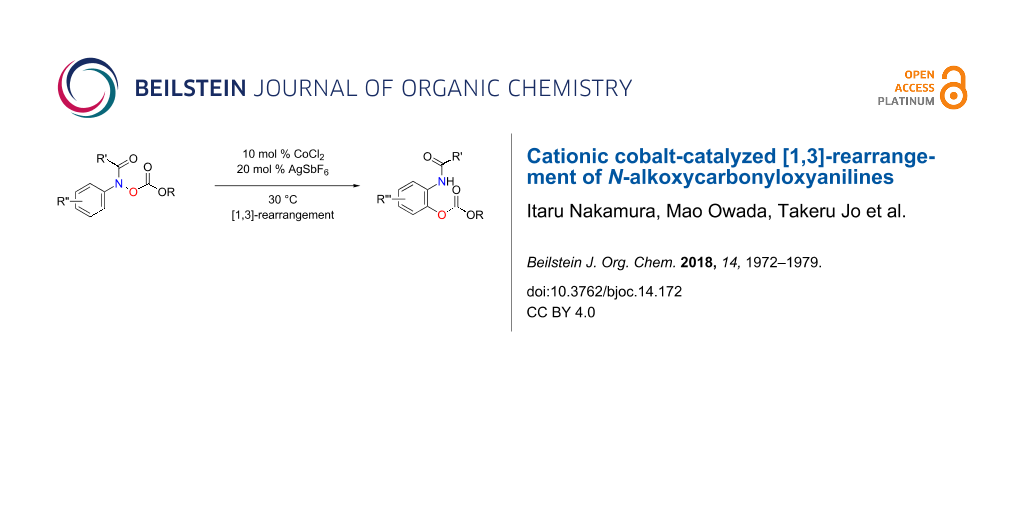