All articles from this author
Alexander A. Korlyukov


All articles from this author
Pavel V. Dorovatovskii


All articles from this author
Yan V. Zubavichus


All articles from this author
Alexander O. Terent’ev

The iodo-oxyimidation of styrenes with the N-hydroxyimide/I2/hypervalent iodine oxidant system was proposed. Among the examined hypervalent iodine oxidants (PIDA, PIFA, IBX, DMP) PhI(OAc)2 proved to be the most effective; yields of iodo-oxyimides are 34–91%. A plausible reaction pathway includes the addition of an imide-N-oxyl radical to the double C=C bond and trapping of the resultant benzylic radical by iodine. It was shown that the iodine atom in the prepared iodo-oxyimides can be substituted by various nucleophiles.

The presented work opens a new chapter in the chemistry of N-hydroxyimides in combination with hypervalent iodine compounds with formation of imide-N-oxyl radicals. These radicals were used as reagents for the addition to a terminal position of the double bond of styrenes with subsequent iodination of the resulting benzylic radical.

It is important to note, that nitroxyl radicals are widely used in organic and biological chemistry, and in material design [1-3]. These radicals are applied in the development of monomolecular magnets [4,5], spintronics [2,6], magneto-LC effect studies [7,8], organic voltaic cells [9], electrodes for electrochemical synthesis [2], and as mediators of living polymerization [10,11]. In organic synthesis more stable types of N-oxyl radicals can be used as carbon-centered radical scavengers [12], oxidation catalysts, mainly for conversion of alcohols to carbonyl compounds [11,13-17]. Less stable imide-N-oxyl radicals are used as effective mediators for CH-functionalization with formation of C–C, C–O, C–S, and C–N bonds [11,16,18-42].

Phthalimide-N-oxyl (PINO) is one of the most known imide-N-oxyl radicals that is generated from an inexpensive N-hydroxyphthalimide (NHPI). This radical was used in various aerobic oxidations of bulk chemicals [18,19,43,44].

In the present work imide-N-oxyl radicals were used for the addition to the C=C bonds of styrenes with subsequent functionalization of the resulting benzylic radicals.

Recently, the precursors of N-oxyl radicals, such as N-hydroxyphthalimide (NHPI), N-hydroxysuccinimide (NHSI), N-hydroxybenzotriazole (HOBt) and hydroxamic acids, have been used in the reactions of radical oxygenation of styrenes [45]. Growth of interest is observed concerning the reactions of styrenes with imide-N-oxyl radicals, in which the latter add to the terminal position of the double C=C bond with the formation of stabilized benzyl radicals, which undergo the subsequent functionalization. In the presence of oxygen or tert-butyl hydroperoxide, oxidation proceeds to form the C–O [46-51] or the C=O [52-55] moiety. More complex reagents and reaction systems allows to form C–C [56,57] and C–N [58,59] bonds.

Among the above-mentioned methods, there are no examples of C–Hal bond formation despite the wide usage of organohalides in chemical syntheses. In the row of organohalides, iodides are the most reactive and versatile reagents for the following transformations [60].

One of the purposes of our work was to introduce iodine in the process of difunctionalization of styrenes with imide-N-oxyl radicals. Iodine atom in the product can act as a versatile leaving group for further transformations. The involvement of the iodine in the radical reactions of styrenes is complicated by the fact that unsaturated compounds readily undergo electrophilic iodination with the addition of an external nucleophile [61,62]. The oxidants used for the preparation of imide-N-oxyl radicals, in particular the hypervalent iodine compounds and peroxides [63-73], also generate electrophilic iodinating intermediates (Scheme 1).

For several decades, a number of papers on the electrophilic iodination of C=C bonds by iodine-containing oxidative systems with the addition of various nucleophiles have been published, all of these processes have common mechanism and the same regioselectivity. The free-radical approach developed in the present work affords the opposite (anti-Markovnikov) regioselectivity of the addition to the double bond.

In the present work, the reaction of styrenes 1a–k and N-hydroxyimides 2a,b with the formation of iodo-oxyimidated products 3aa–ka, 3ab–db, 3fb, 3hb and 3kb was carried out (Scheme 2).

The key feature of the developed process is the non-standard regioselectivity of the formation of C–I and C–O bonds, which implies the radical pathway of the reaction.

The iodo-oxyimidation of styrenes was studied in the model reaction of styrene (1a) with N-hydroxyphthalimide (2a). During the optimization, the oxidant and the iodine source, as well as the nature of the solvent and the reaction time were varied (Table 1).

The possibility of using iodide salts (NaI and TBAI) was shown in Entries 8 and 9, however, the yield of 3aa in that cases is lower than in the case of molecular iodine.

In the optimized reaction conditions (Table 1, entry 2) iodo-oxyimidation of various vinylarenes were performed in order to study the scope of the developed method (Figure 1).

The iodo-oxyimidation successfully proceeded using styrenes having both electron-withdrawing (Cl, F, Br) substituents in the aromatic ring (products 3ca, 3da, 3fa, 3ha, 3cb–hb, yield 34–91%), and an electron-donating methyl group (products 3ba, 3ea, 3ga, 3bb, yield 39–85%). Good yields (60–79%) were achieved with a cyclic analogue of styrene – indene (1k, compounds 3ka, 3kb). β-Substituted styrenes (β-methyl styrene (1i) and (E)-stilbene (1j) also underwent the studied transformation giving iodo-oxyimides 3ia (yield 51%) and 3ja (yield 83%). The reaction of NHPI (2a) with p-methoxystyrene under standard conditions led to a complex mixture of products, possibly due to an increased tendency of the substrate to electrophilic addition of iodine. The use of allylbenzene in the reaction did not result in the formation of the desired iodo-oxyimide, presumably due to a side process of oxidation of the allylic methylene fragment. The use of N-hydroxyphthalimide (2a) gives iodo-oxymidation products with yields generally higher (25% on average) than that of N-hydroxysuccinimide (2b).

Structures of the iodo-oxyimides 3aa–ka, 3ab–db, 3fb, 3hb and 3kb were confirmed by 1D and 2D NMR spectroscopy, IR spectroscopy, high-resolution mass spectrometry and elemental analysis. An additional confirmation of the structure of 3ca was made using X-ray crystallographic analysis (Figure 2). Details of the data collection and refinement are provided in Supporting Information File 1 and can be obtained free of charge via the web at https://www.ccdc.cam.ac.uk/structures/ (CCDC-1845323).

Proposed mechanism of the iodo-oxyimidation

On the first step, NHPI (2a) is oxidized by PhI(OAc)2 to form PINO radical. The addition of PINO to the double C=C bond of styrene (1a) leads to the formation of intermediate A. At the final step the iodine traps benzyl radical A to form the final product 3aa.

Cyclic voltammetry (CV) experiments on a working glassy-carbon electrode were carried out for deeper understanding of the plausible reaction mechanism. As CH2Cl2 is not suitable as a solvent due to the poor solubility of NHPI, thus MeCN was used. Tetrabutylammonium tetrafluoroborate, which cannot be oxidized in such experimental conditions [80], was chosen as a supporting electrolyte. Cyclic voltammograms of styrene (1a), NHPI (2a), I2 and PhI(OAc)2 in MeCN solution were registered (Figure 3).

The NHPI oxidation peak is observed at +2.18 V, whereas iodine is oxidized at slightly higher potential (+2.27 V), and styrene oxidation peak is not so pronounced. Therefore, we can conclude that under experimental conditions NHPI is oxidized preferentially over iodine providing PINO radicals that leads to the observed regioselectivity. The contribution of the oxidation of styrene to the overall process is unlikely.

Practical application of the iodo-oxyimidation

The applicability of the developed method for the gram-scale preparation was demonstrated by the synthesis of 3aa (3.1 g, 79%) without column chromatography (Scheme 4).

The synthetic utility of the obtained products 3aa and 3ab was demonstrated by the substitution of the iodine atom with O- (methanol), S- (benzenesulfinate) and N- (azide) nucleophiles (Scheme 5).

It is noteworthy that the reaction of compound 3aa with sodium benzenesulfinate results in the nucleophilic substitution of both the iodine atom and the oxyphthalimide moiety to form a vicinal disulfone 4b.

Iodo-oxyimidation of vinylarenes using N-hydroxyphthalimide and N-hydroxysuccinimide was developed. PhI(OAc)2 was the best oxidant for the synthesis of the target products (yields up to 91%). In contrast to previous studies in which oxidants promote the electrophilic addition of iodine to the C=C bond, radical addition predominates in the discovered process. Radical pathway starts from the attack of imide-N-oxyl radicals on the double C=C bond, which allows for anti-Markovnikov type regioselectivity of C–O and C–I bond formation. Electrochemical mechanistic studies based on cyclic voltammetry (CV) data confirm proposed reaction mechanism. Possible ways of using the obtained iodo-oxyimidated products via substitution of iodine atom were demonstrated.

Iodo-oxyimides 3aa–ka, 3ab–db, 3fb, 3hb and 3kb should be stored in a freezer and handled with minimal heat due to their instability at elevated temperatures.

© 2018 Krylov et al.; licensee Beilstein-Institut.
This is an Open Access article under the terms of the Creative Commons Attribution License (http://creativecommons.org/licenses/by/4.0). Please note that the reuse, redistribution and reproduction in particular requires that the authors and source are credited.
The license is subject to the Beilstein Journal of Organic Chemistry terms and conditions: (https://www.beilstein-journals.org/bjoc) 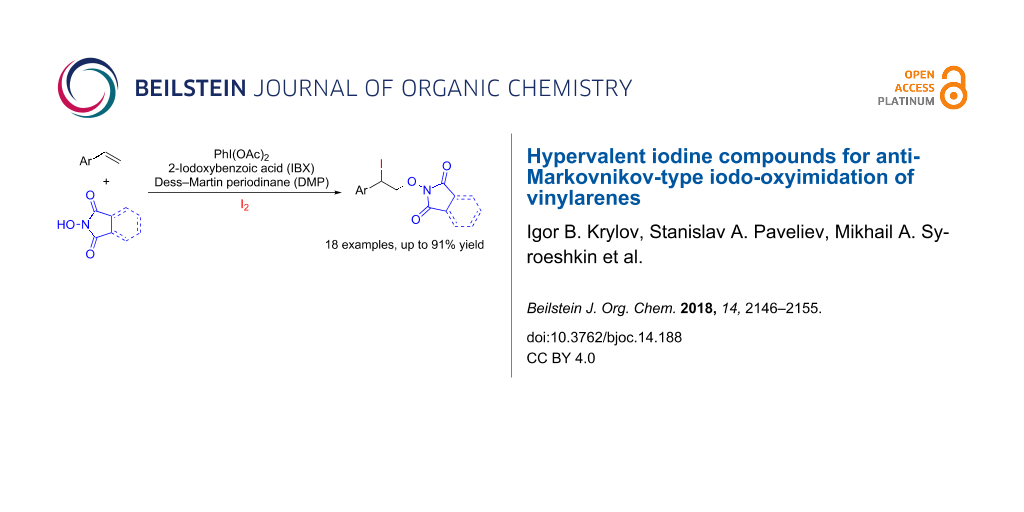