All articles from this author
Akira Yoshimura


All articles from this author
Keiichi Noguchi


All articles from this author
Victor N. Nemykin


All articles from this author
Viktor V. Zhdankin

[Bis(trifluoroacetoxy)iodo]benzene (BTI) and (diacetoxyiodo)benzene (DIB) efficiently promote the formation of acylnitroso species from hydroxamic acids in the presence of various dienes to give the corresponding hetero-Diels–Alder (HDA) adducts in moderate to high yields. The present method could be applied to the HDA reactions of acylnitroso species with o-benzoquinones generated by the oxidative dearomatization of guaiacols.

The hetero-Diels–Alder (HDA) reaction of N-acylnitroso species with dienes provides the facile and highly stereoselective synthesis of 1,2-oxazines, which have been widely recognized as useful synthons in the synthesis of biologically active natural products [1]. Generally, in the presence of dienes, acylnitroso species are in situ generated from hydroxamic acids with oxidants due to their instabilities (Scheme 1, route a). Among the oxidants, tetra-n-alkylammonium periodates are commonly employed for these HDA reactions, however, the removal of the tetra-n-alkylammonium salts, massively generated in these reactions, is often complicated [2-5]. Although the Swern–Moffat oxidation [6], Dess–Martin oxidation [7], and metal-mediated/catalyzed oxidation reactions [8-12] are known as alternative methods [13,14], these methods suffer from a narrow scope and/or low product yields. Furthermore, in the cases where these oxidation methods are inapplicable, a two-step procedure based on the liberation of the acylnitroso species by thermolysis of anthracenyl cycloadducts (route b) is widely used [15,16]. Therefore, there is a need to develop novel oxidation methods of hydroxamic acids for HDA reactions.

As part of our research on the syntheses of heterocycles by iodine(III)-mediated/catalyzed oxidative cycloaddition reactions [17-19], we have found that iodine(III) reagents are effective in the oxidation of N–O bonds of oximes in the cycloaddition reaction of in situ formed nitrile oxides [20,21]. Although Adam and Bottke’s group have demonstrated that (diacetoxyiodo)benzene (DIB) and iodosylbenzene are applicable to the ene reactions of acylnitroso species derived from hydroxamic acids [22], the iodine(III)-mediated oxidative cycloaddition reaction of hydroxamic acids with dienes is still unknown. Herein, we report the HDA reaction of acylnitroso species generated from hydroxamic acids by [bis(trifluoroacetoxy)iodo]benzene (BTI) or DIB. The present method could be applied to HDA reactions with not only simple dienes but also with masked o-benzoquinones (MOBs) generated by the oxidative dearomatization of guaiacols.

Our initial studies commenced with the screening of solvents and I(III) reagents for the oxidative cycloaddition reaction of hydroxamic acid 1a with 1,3-cyclohexadiene (2a, Table 1). In the presence of BTI (1.5 equiv), in polar solvents such as methanol, tetrahydrofuran (THF), acetonitrile, and ethyl acetate (Table 1, entries 1–4), or in organochlorine solvents such as chloroform, dichloroethane (DCE), and dichloromethane (DCM, Table 1, entries 6–8), the HDA reactions smoothly proceeded at room temperature within 24 h to give the desired endo-cycloadduct 3aa in 78–98% yield. In particular, the reaction in DCM led to a full conversion to 3aa within 1 h (Table 1, entry 8) and a reduced amount of BTI (even 1.1 equiv) brought about the similar result (3aa: 98%, Table 1, entry 9). Although replacing BTI with DIB or iodosylbenzene (1.5 equiv) afforded the HDA adducts 3aa in 96 and 90% yields, respectively (Table 1, entries 10 and 11), BTI showed better results (Table 1, entries 8 and 9). On the other hand, the use of IBA-OTf, which was effective in the oxidative cycloaddition reaction of oximes [20,21], gave nitrone-trifluoromethanesulfonic acid (TfOH) complex 4 at 40 °C for 24 h in 85% yield (Table 1, entry 12). Furthermore, when IBA-OTf was employed at lower temperature (−40 °C), the HDA adduct 3aa was obtained in 80% yield (Table 1, entry 13). These results suggest that the initially formed 3aa is converted into 4 by TfOH derived from IBA-OTf. To test this hypothesis, the oxazine 3aa was treated with TfOH in DCM at 40 °C for 18 h and afforded 4 quantitatively. Furthermore, the TfOH-mediated formation of nitrone from such HDA adducts has been reported [23]. It should be mentioned that the structures of 3aa and 4 were determined by single crystal X-ray analysis [24].

As a further application of the iodine(III)-mediated oxidative cycloaddition reactions, the present method was extended to HDA reactions with masked o-benzoquinones (MOBs) generated by the oxidative dearomatization [26-29] of guaiacols with methanol (Scheme 2). Liao’s and other groups have developed the DA reactions with MOBs as dienes [30-33], which recently were employed in the HDA reactions of acylnitroso species [34]. However, in the HDA reactions with MOBs, the oxidation of the hydroxamic acids to the acylnitroso species requires other oxidants such as tetra-n-alkylammonium periodates. To our delight, the sole use of DIB in a mixed solvent of DCM and methanol gave the endo-cycloadduct 6aa as a single regioisomer in 84% yield starting from hydroxamic acid 1a and guaiacol (5a, Scheme 2). The structure of 6aa was determined by single crystal X-ray analysis [24]. It should be mentioned that a slow addition of 1a to the solution of 5a and DIB over a period of 3 h was essential for an effective formation of 6aa. Furthermore, this procedure could be applied successfully to the oxidative cycloaddition reaction of 1a with various guaiacols 5b–g and to the reaction of hydroxamic acids 1b and 1c with 5a. The corresponding products 6ab–6ag, 6ba, and 6ca were obtained with complete regioselectivities in 70–89% yields, albeit low to moderate yields in cases of the bromo-substituted 6ad (53%) and methoxycarbonyl-substituted 6ae (28%).

In most cases of the attempted reactions of 1a with simple dienes or guaiacols, benzoyl anhydride was detected as a byproduct. Since benzoyl anhydride is known to be formed via the dimerization of benzoylnitroso compounds [35], these results suggest that acylnitroso species would be generated from 1a by iodine(III) reagents. Therefore, the high endo selectivities of 1,2-oxadines 3aa–3ca, 3ab, and 6 would depend on the avoidance of electrostatic repulsion between the nitrogen lone pairs of acylnitroso species with π-electrons of the electron-rich dienes in the exo transition states (exo-lone-pair effect) [36]. Furthermore, the regioselectivities observed for 3ae, 3be [12,36], and 6 [34] are in consistency with experimental data as well as the results of FMO and DFT calculations. The decline in regioselectivity of 3ce may be due to steric repulsion between the sterically hindered tert-butyloxycarbonyl group in 1c with the 2-methyl substituent of isoprene.

This work was partially supported by JSPS Grants-in-Aid for Scientific Research (C) (Grant No 15K07852) and by JSPS Fund for the Promotion of Joint International Research (Grant No 16KK0199). V.V.Z. and A.Y. are also thankful to Tomsk Polytechnic University (VIU-316/2017).

© 2018 Shimizu et al.; licensee Beilstein-Institut.
This is an Open Access article under the terms of the Creative Commons Attribution License (http://creativecommons.org/licenses/by/4.0), which permits unrestricted use, distribution, and reproduction in any medium, provided the original work is properly cited.
The license is subject to the Beilstein Journal of Organic Chemistry terms and conditions: (https://www.beilstein-journals.org/bjoc) 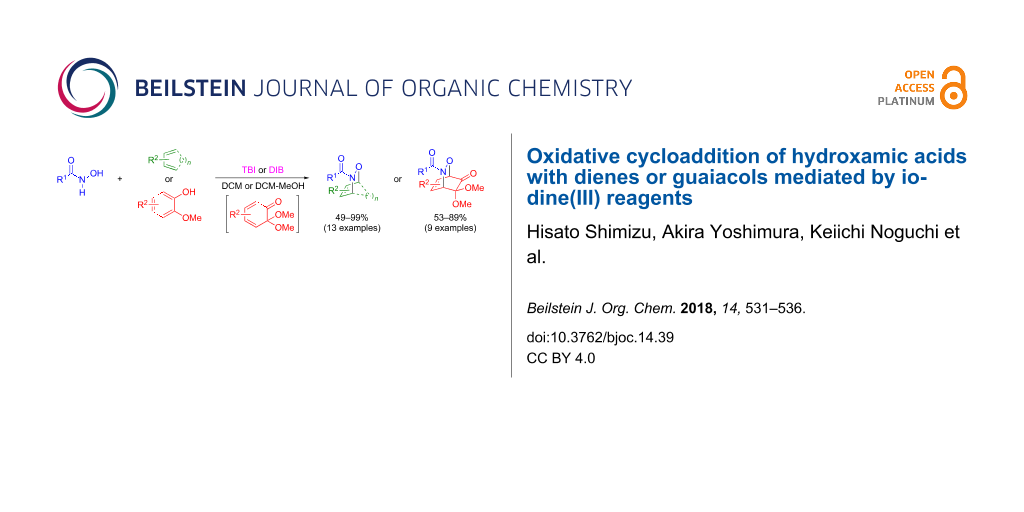