All articles from this author
Christian Thiehoff


All articles from this author
Gülay Yilmaz


All articles from this author
Stephanie Meyer


All articles from this author
Constantin G. Daniliuc

Herein, we describe a catalytic fluorooxygenation of readily accessible N-allylcarboxamides via an I(I)/I(III) manifold to generate 2-oxazolines containing a fluoromethyl group. Catalysis is conditional on the oxidation competence of Selectfluor®, whilst HF serves as both a fluoride source and Brønsted acid activator. The C(sp3)–F bond of the mono-fluoromethyl unit and the C(sp3)–O bond of the ring are aligned in a synclinal relationship thereby engaging in stabilising hyperconjugative interactions with vicinal, electron-rich σ-bonds (σC–C→σ*C–F and σC–H→σ*C–O). This manifestation of the stereoelectronic gauche effect was established by X-ray crystallographic analysis of a representative example. Given the importance of fluorine in drug discovery, its ability to modulate conformation, and the prevalence of the 2-oxazoline scaffold in Nature, this strategy provides a rapid entry into an important bioisostere class.

Marine and terrestrial natural product bioprospecting has established a broad spectrum of structurally complex, bioactive metabolites containing the venerable 2-oxazoline unit [1,2]. This diversity is exemplified by the siderophore antibiotic D-fluviabactin, the cytotoxic agent westiellamide, the antifungal macrodiolide leupyrrin A1 and the antitumour compound BE-70016 (Figure 1). In addition, synthetic polymers based on the 2-oxazoline building block constitute versatile platforms for a range of biomedical applications ranging from drug delivery through to tissue engineering [3,4]. Collectively, the importance of the 2-oxazoline scaffold for translational research, together with its strategic value in the design of chiral ligands and auxiliaries [5-7], has culminated in a rich and innovative arsenal of synthetic methods.

To contribute to the current catalysis ordnance for the preparation of 2-oxazolines, and provide a direct route to 5-fluoromethyl derivatives from simple unactivated alkenes, the fluorocyclisation of N-allylcarboxamides facilitated by the in situ generation of p-TolIF2 was envisaged [8-11]. Since hydrogen and hydroxy groups are often substituted by fluorine in molecular editing processes [12], this transformation would provide facile access to a bioisostere of the parent scaffold (Figure 1, right).

In recent years, I(I)/I(III) catalysis has emerged as a powerful and expansive platform for the generation of structural complexity [13-24]. Motivated by the noticeable absence of mild, catalysis-based strategies to generate the vicinal difluoroethylene motif directly from simple alkenes [25-27], we recently exploited I(I)/I(III) catalysis to enable this transformation [28,29]. Employing Selectfluor® as the terminal oxidant, it was possible to generate p-TolIF2 in situ from p-iodotoluene and an inexpensive HF source [30-35]. This strategy proved to be mild and general, smoothly converting terminal olefins to the corresponding 1,2-difluoroethylene unit; a substructure that may be considered a chiral, hybrid bioisostere of the Et and CF3 groups (Figure 2, top) [36].

Since the success of this process is contingent on the efficient generation of p-TolIF2 in situ, the platform lends itself to related oxidative transformations. To that end, it was envisaged that the protocol could be effectively translated to the fluorocyclisation of readily accessible N-allylcarboxamides (Figure 2, bottom). Whilst the initial phase of catalysis would resemble that of the catalytic difluorination, the presence of the amide would allow the original reaction path to be intercepted to generate a 2-oxazoline with an exocyclic fluoromethyl unit.

Optimisation: As a starting point, the conversion of N-allylbenzamide (1) to the corresponding 2-phenyloxazoline 2 was investigated (Table 1). Reactions were performed in DCE (0.2 mol·L−1) with 20 mol % catalyst loading, and using Selectfluor® as the oxidant. An initial reaction screen, based on the conditions reported for our vicinal difluorination study [9], began with an exploration of the effect of amine/HF ratio. This was deemed prudent due to the perceived likelihood that HF also functions as a Brønsted acid activator in catalysis. Employing an amine/HF ratio of 1:4.5, product formation was observed (Table 1, entry 1, 46%). Reducing this ratio to 1:3 had a detrimental effect on catalysis efficiency, generating the product in <5% yield (Table 1, entry 2). Increasing the ratio to 1:7.5 and 1:9.23 (Olah’s reagent) restored catalysis efficiency but did not surpass previous observations (44 and 46% yields, Table 1, entries 3 and 4, respectively). For comparison, the reaction was attempted using Pyr·HF (6 equiv) but this alteration had an adverse effect on yield (27%, Table 1, entry 5). Based on these findings, the remainder of the study was performed with an amine/HF ratio of 1:4.5. Reducing the concentration from 0.2 mol·L−1 to 0.1 mol·L−1 led to a large increase in yield (81%, Table 1, entry 6).

Whilst solvents such as toluene, acetonitrile and THF were less effective than DCE (Table 1, entries 7–9), switching to DCM led to full consumption of the starting material and a quantitative NMR yield (Table 1, entry 10). In a final optimisation round, the catalyst loading was reduced to 10 mol % with no discernable effect on performance (Table 1, entry 11). However, further decreasing the loading to 2.5 mol % demonstrates the limits of the system (30% yield, Table 1, entry 12). Finally, for completeness, the control experiment in the absence of p-TolI was performed and confirms the role of this species in catalysis.

Establishing scope: With a general procedure having been developed, attention was then focused on establishing the scope of the transformation (Figure 3). To explore the effect of changes to the aryl ring, compared to the parent scaffold 2a, representative N-allylcarboxamides containing the p-OCH3, p-NO2 and p-CF3 substituents were exposed to the general conditions (to generate 2b, 2c and 2d, respectively). These transformations proceeded smoothly to deliver the target 2-oxazolines in good yields (up to 69%) and in the case of compound 2c, the fluorocyclisation was performed on a 1 mmol scale with no impact on the yield. However, the aldehyde derivative 2e proved to be more challenging and was isolated in a modest 31% yield. Systems containing ortho-substituents (2f and 2g) were also well tolerated but in the case of 2f it was necessary to extend the reaction time to 40 h. Disubstitution patterns such as in 2h and 2i, the latter of which contains a free phenol moiety, were also tolerated (69% and 65% yield, respectively), as was the highly deactivated pentafluorophenyl analogue 2j (48%). To briefly explore the effect of chain length on efficiency, the cyclisation of N-(but-3-en-1-yl)benzamide and N-(pent-4-en-1-yl)benzamide was explored (to generate 2k and 2l, respectively). Unsurprisingly, whilst the 6-membered ring formed in 42% yield, cyclisation to form the analogous 7-membered ring failed. It was, however, possible to generate heterocyclic species such as the 9-fluorenonyl-substituted oxazoline 2m (48%) and the furan 2n (59%). Whilst it was not possible to generate the bisoxazoline 2o (X = N), the analogous carbogenic scaffold 2p (X = CH) formed in 46% yield. Finally, although more challenging, it was also possible to generate an aliphatic 2-oxazoline (2q) in a modest 44% yield.

Finally, to explore possible diastereocontrol in the cyclisation event, oxazoline 2r was generated from the corresponding α-chiral amide under standard conditions. Analysis of the crude reaction mixture by 19F NMR allowed a yield of >95% to be determined and a 1:1 dr. This is to be expected given the remote nature of the stereocentre. It is important to note that attempts to separate this compound by column chromatography resulted in significant hydrolysis. Consequently, the oxazoline was exposed to acidic media and quantitatively hydrolysed to the fluorohydrin 3 in 61% yield (Scheme 1). In contrast, the cyclisation to form 2s was highly diastereoselective on account of the proximal nature of the stereocentre (65%, dr >95:5).

Compound 3 is noteworthy on account of the β-amino alcohol and β-fluoro alcohol motifs that collectively preorganised the propyl chain. Stabilising hyperconjugative interactions manifest themselves in the characteristic gauche conformations around the two respective torsion angles [37,38]. In this case, it is also highly probable that hydrogen bonding will reinforce these conformational preferences. Whilst it was not possible to isolate crystals of 3 that were suitable for X-ray analysis, it was possible to unambiguously establish the structure of oxazoline 2c bearing a p-NO2 group (Figure 4 and Table 2) [39]. The molecular structure reveals the expected gauche arrangement with a dihedral angle

FCCO ≈ −73.4° due to σC–C→σC–F* and σC–H→σC–O* interactions. This observation is in agreement with the fluorine gauche effect.

An operationally simple route to 5-fluoromethyl-2-oxazolines from readily accessible N-allylcarboxamides is disclosed based on an I(I)/I(III) catalysis manifold. This metal-free fluorocyclisation employs p-iodotoluene (10 mol %) as an inexpensive organocatalyst and Selectfluor® as oxidant. The optimal amine/HF ratio (1:4.5) is easily obtained by combining commercially available triethylamine tris(hydrogenfluoride) (Et3N·3HF) and Olah’s reagent (Pyr·HF). Broad functional group tolerance is observed in the products, the structures of which display the stereoelectronic fluorine gauche effect.

We acknowledge generous financial support from the WWU Münster and the Deutsche Forschungsgemeinschaft (SFB 858 and Excellence Cluster EXC 1003 “Cells in Motion”). We thank Dr. Nicola Lucchetti for helpful discussions.

© 2018 Scheidt et al.; licensee Beilstein-Institut.
This is an Open Access article under the terms of the Creative Commons Attribution License (http://creativecommons.org/licenses/by/4.0), which permits unrestricted use, distribution, and reproduction in any medium, provided the original work is properly cited.
The license is subject to the Beilstein Journal of Organic Chemistry terms and conditions: (https://www.beilstein-journals.org/bjoc) 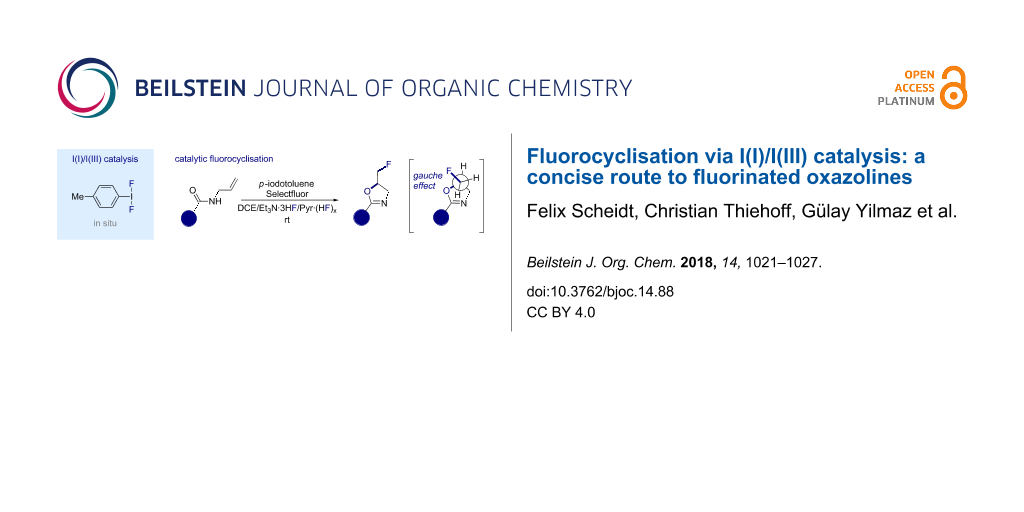