A golden opportunity: benzofuranone modifications of aurones and their influence on optical properties, toxicity, and potential as dyes

Aurones are a small subclass of the flavonoid family known primarily for their unusual structure and the golden yellow color they impart to the flowers of snapdragons and cosmos. Most studies of aurones focus on their range of biological activities, but relatively little has been reported with respect to their optical properties, unlike their aza and thio analogs. What little is known has focused entirely on the influence of the benzylidene portion. In this study, the influence of substitution in the benzofuranone ring on the UV–vis spectrum is explored, as well as an initial screening of their toxicity and a qualitative preliminary study of their potential to act as fabric dyes.

Aurones are a fascinating minor sub-family of the flavonoid natural products [1,2]. While they feature the same C15 composition as other flavonoids, the skeleton is quite different, featuring a benzofuranone connected to an aromatic ring via an exocyclic alkene. This unusual skeleton has attracted a modest amount of synthetic attention and fairly recently significant biological focus. At the same time, aurones were first noted (and indeed their name is derived from) for their golden yellow color. The colors of flavonoids in general have been appreciated and used for virtually the entirety of recorded history and yet the application of aurones as dyes or pigments has not been reported or studied [3].

Even the optical properties of aurones have had very minimal study. The reports that have appeared have all focused on fluorescent properties and have also been largely limited in scope to the influence of the benzylidene portion. Most noteworthy is the report by Bane and co-workers examining the UV–vis and fluorescent properties of a series of amino-substituted aurones [4]. Subsequently, Liu and co-workers explored the same series of aurones using computational methods to develop and validate the method for the rational design of new aurone fluorophores [5].

As an extension of our on-going studies of the aurone ring system, we chose to study the potential for aurones to be used as dyes as well as a more extensive study of the impact of substitution in the benzofuranone portion of the molecule on its optical properties.

We have previously reported the synthesis of a significant number of new aurones by way of the common Knoevenagel condensation approach, mostly varying in the benzylidene portion. To explore benzofuranone variations using this method, different benzofuranone starting materials are required. Although not likely to be the most colorful, we elected for simplicity’s sake to use p-tolualdehyde as the benzylidene precursor for all of the new aurones. The synthesis itself was performed via one of two methods (Figure 2). For all compounds without a free hydroxy group, the neutral alumina method of Varma combined with an aldehyde scavenging step was employed to afford pure products without the need for any chromatography in generally reasonable yields and excellent purity [8]. For hydroxy-substituted compounds, a more traditional base-mediated reaction was employed [9]. Product purification was not as easy in these cases and the product yield was sacrificed for the sake of high purity, so yields should not be considered optimized.

With the desired compounds in hand, their UV–visible spectra were recorded at concentrations between 29 and 44 μM in acetonitrile (Figure 3 and Table 1). While not all substituents were prepared at every position, some interesting trends were observed. Substitution at the 4-position whether halogen or hydroxy afforded essentially identical lambda maxima (390 nm), slighly red-shifted compared to the unsubstituted compound 1. On the other hand, hydroxy groups at the 6-position result in a significant blue shift of this lambda max by roughly 40 nm to around 338 nm, presumably due to their donating effect and conjugation with the carbonyl oxygen. Halogen substituents at the 6-position generally had little effect, with the exception of the most electron-withdrawing fluorine, which resulted in a slight blue-shift of roughly 10 nm. Unexpectedly, any halogen at the 5-position had an effect nearly identical to that of halogen at the 4-position, resulting in a slight red-shift compared to the unsubstituted compound. On the other hand, substitution at the 7-position had virtually no effect, which is to be expected due to the lack of direct conjugation with the carbonyl as well as the only modest electronic effects of alkyl, chlorine, and bromine. In general, the substituent effects are all fairly modest and result in fairly moderate changes in the extinction coefficient (although hydroxy substitution does definitely increase this value by roughly 50%).

While these results on the impact of the benzofuranone portion of aurones on their optical properties are interesting, if one were to think about using them as dyes, toxicity is also an important consideration. Generally, aurones are considered to be relatively non-toxic, although data reported in the literature shows considerable variability even in this respect. An initial screening of toxicity was conducted at a fairly high concentration (200 μM) on the present series of compounds using a standard HEP G2 inhibition assay (Table 1). Compared to a currently used yellow dye (tartrazine), the aurones are similar to more toxic. Within the aurone series, though, an interesting pair of trends can be observed. First, all hydroxylated aurones are comparatively more toxic, displaying >50% inhibition at 200 μM. Methyl groups are similarly mostly more toxic. For the halogens, however, location is fairly important, with the 6 or 7 position being much less toxic (similar to tartrazine) and dramatically better than the unsubstituted base compound 1, with the unexpected exception of 7-bromo compound 10. Whether this trend is general or not for aurone compounds is an interesting question for future study.

As the initial inspiration for this work was the potential of aurones as textile dyes, two of the more interesting compounds, aurones 15 and 10 were used in a very preliminary attempt at fabric dyeing. Three processes were compared: pre-, simultaneous, and post-mordanting. As can be seen in Figure 4, dyeing did occur in all cases. With aurone 10, simultaneous mordanting qualitatively appeared to be better, while with aurone 15 pre-mordanting was superior. Aurone 15 afforded more vibrant colors in general and also adhered to a wider range of fabrics. While several were natural fibers (silk and wool in particular), synthetics including polypropylene were also substrates. This feature is quite remarkable and has the potential to make aurone dyes useful in dyeing polypropylene, a substrate that is generally only dyed with any efficiency using an extrusion method. Of equal interest was that a highly qualitative photobleaching study indicated a significant degree of stability of these aurone-based dyes, with simultaneous or pre-mordanting offering better stability. Clearly further studies of the generality of this observation as well as its longer term retention and photostability are required.

In conclusion, the benzofuranone portion of the aurone skeleton does have a definite impact on both the UV–vis spectral and cytotoxicity properties of aurones. Interestingly, the position of the substituent was often more important than the exact substituent (at least for the examples studied), with halogen or hydroxy at the 4-position are red-shifted by roughly 10 nm compared to the unsubstituted compound and any halogen or methyl at the 5-position likewise displays a similar shift. Only hydroxylation at the 6-position displays a significant blue shift by roughly 40 nm. With respect to toxicity, halogens were the least toxic substituents, displaying the lowest cytotoxicity when at the 6- or 7-positions. Hydroxylation or substitution at the 4-position invariably lead to higher cytotoxicity, though often times no worse than the unsubstituted benzofuranone system. Finally, preliminary dyeing studies showed the expected absorption on natural fibers, but also an unexpected affinity for polypropylene. Future studies of these and other aurones are underway and the results will be reported in due course.

The support of Middle Tennessee State University and the Department of Chemistry are gratefully acknowledged.

© 2019 Schmitt and Handy; licensee Beilstein-Institut.
This is an Open Access article under the terms of the Creative Commons Attribution License (http://creativecommons.org/licenses/by/4.0). Please note that the reuse, redistribution and reproduction in particular requires that the authors and source are credited.
The license is subject to the Beilstein Journal of Organic Chemistry terms and conditions: (https://www.beilstein-journals.org/bjoc) 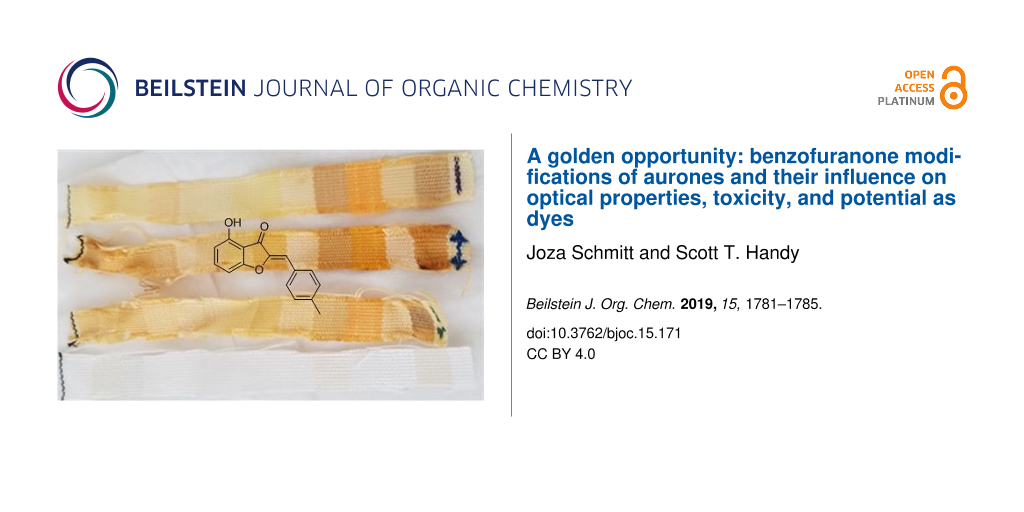