All articles from this author
Tao Zhou


All articles from this author
Agus Trianto

(2Z,4E)-3-Methyl-2,4-decadienoic acid (1) was identified as a major metabolite from a culture extract of a marine bacterium Microbulbifer which was collected from a stony coral Porites sp. NMR-based spectroscopic analysis revealed that 1 is an unsaturated fatty acid in which a methyl group is located in an uncommon position as a natural product. Feeding experiments of 13C-labeled precursors clarified that ʟ-methionine-derived methylation takes place at the carbon which is derived from the carbonyl carbon of acetate. Compound 1 showed weak growth inhibition against Saccharomyces cerevisiae.

Marine microbial symbionts are currently recognized as a reservoir of new bioactive compounds [1]. The most well-studied host animal is the sponge from which a vast array of natural products has been isolated and symbiotic bacteria are suggested to be responsible for the biosynthesis of such natural products [2]. Although it is well established that corals are associated with diverse microbes, coral-associated bacteria and their secondary metabolites have received lesser attention [3]. To date, a couple of new compounds were discovered from soft coral-associated bacteria such as pseudoalteromones from Pseudoalteromonas isolated from the cultured octocoral Lobophytum crassum [4,5] and macrolactin V from Bacillus amyloliquefaciens associated with a gorgonian coral Junceella juncea [6], but there is no report on the compounds from stony coral-associated bacteria except our recently published work [7].

Microbulbifer is a genus of Gram-negative bacteria belonging to the class Gammaproteobacteria [8]. Members of this genus are frequently isolated from halophilic environments including marine solar saltern [9], marine sediment [10], and marine invertebrates [11]. The Microbulbifer species are considered to be marine obligate bacteria as they require sodium salt for growth [8]. In our continuing investigation of natural products from marine-derived bacteria, (2Z,4E)-3-methyl-2,4-decadienoic acid (1) was obtained from the culture extract of Microbulbifer sp. C4-6 isolated from a stony coral Porites sp. (Figure 1). Compound 1 is known as a synthetic compound [12] but this is its first discovery as a natural product. In addition, 1 is biosynthetically unique: it has an uncommon methylation pattern in its carbon chain, derived from the C-methylation with ʟ-methionine at a carbon originated from a carbonyl carbon of acetate. In this paper, we report the isolation and structure determination of 1 and its biosynthetic origin proven by the feeding experiments of 13C-labeled precursors.

The bacterial strain C4-6 was isolated from a Scleractinian (stony) coral Porites sp. On the basis of 16S rRNA gene sequence, this strain was identified as Microbulbifer. Strain C4-6 was cultured in A11M seawater medium at 30 °C for five days, and the whole culture broth was extracted with 1-butanol. The extract was consecutively fractionated by normal- and reversed-phase column chromatographies, followed by HPLC purification on a C18 column to yield compound 1.

The molecular formula of 1 was determined to be C11H18O2 with three degrees of unsaturation on the basis of its NMR and HR-ESI-TOFMS (m/z 181.1230 [M − H]−; calcd for C11H17O2, 181.1229) data. The UV spectrum of 1 in methanol exhibited an absorption maximum at 262 nm. The IR absorption bands at 1678 and 2800–3200 cm−1 suggested the presence of carboxyl group. The 1H and 13C NMR data of 1 (Table 1) showed the presence of 11 carbon signals, which were identified by the assistance of a DEPT135 spectrum as two methyls, four sp3 methylenes, three sp2 methines (δC 140.6, 127.7, 115.1), and two sp2 nonprotonated carbons including one carbonyl group (δC 171.3, 153.9). Besides, the 1H NMR spectrum showed characteristic resonances, especially for two methyl groups at δH 2.02 (3H, s) and 0.90 (3H, t) in the highfield region and for multiple methylene signals, suggesting the presence of an alkyl chain. COSY analysis established two separate spin systems, H4/H5/H6/H7 and H8/H9/H10. These partial structures were joined by the mutual HMBC correlations between H7 and H9. Furthermore, long-range correlations from H11 to C2, C3, and C4 and from H2 to C1, C3, and C4 established the carbon connectivity among these carbons to complete the structure of 1 (Figure 2). The double bond geometry was determined on the basis of NOESY analysis and 3JHH coupling constants. NOE was detected between H2 and H11 but not between H2 and H4, reflecting the Z-configuration for the C2–C3 double bond. Similarly, NOESY correlations for H4/H6 and H5/H11 reflected the E-configuration for the C4–C5 double bond, which was corroborated by 3JHH vicinal coupling constant (JH4,H5 = 15.8 Hz).

In the case of 1, methylation at the C3 carbon is inconsistent with the regular methylation pattern that occurs in fatty acids synthesized by the FAS (fatty acid synthase) or polyketides from the PKS (polyketide synthase) system of bacterial groups. Therefore, the biosynthetic origin of 1 was investigated by feeding experiments of 13C-labeled precursors (Table 2). Firstly, in order to verify the origin of the carbon backbone, [1-13C]acetate was fed to the culture which gave a high enrichment of the carbons at C1, C3, C5, C7, and C9 (Figure 4). A feeding experiment with ʟ-[methyl-13C]methionine was then carried out. The high level of enrichment was observed only for C11 in the 13C NMR spectrum, thereby confirming that the methyl group is derived from methionine via SAM. In addition to the fungal sphingolipids described above, methyl branches with SAM-origin are also found in some bacterial fatty acids like tuberculostearic acid, a major constituent of mycobacterial membrane phospholipids [17]. Methylation at the olefinic double bond of oleic acid part in phospholipids is catalyzed by SAM-dependent methyltransferase, followed by 1,2-hydride shift and deprotonation, and a subsequent reduction of the exo-methylene intermediate gives rise to a methyl group (Scheme 2) [18]. The presence of the exo-methylene intermediate was experimentally proved but the enzyme responsible for the double bond reduction has not been identified [18]. Based on the C-methylation pattern found in the biosynthesis of sphingolipid and tuberculostearic acid, we propose a possible mechanism of methylation for compound 1 although further chemical/biochemical investigation is required (Scheme 3). First, 2,4-decadienoic acid is formed and methylation takes place at C3 to give a putative cationic intermediate. The following proton loss from C3 is probable to give directly 1 in a similar fashion to the glucosylceramide biosynthesis. Branched chain fatty acids are commonly present in cell membranes, and mono-methylation at the iso or anteiso position is the most common [19]. Branching at other positions is less common but represents a significant proportion of branched-chain fatty acids in some organisms [19]. Tuberculostearic acid (10-methyloctadecanoic acid (18:1 me(10)), 10- methylhexadecanoic acid (16:1 me(10)), and 10-methylnonadecanoic acid (19:1 me(10)) are the major constituents of the cell wall of Mycobacterium phlei [20]. C9-Methylated glucosylceramides also possess a methyl-branching in the middle of the aliphatic carbon chain of the sphingosine part. C9-Methylated sphingolipids have not been found from plants and animals but are widely produced by many fungi and are thought to play an important role in the interaction between fungi and their host organisms. C9-Methylated sphingolipids are also found from some marine invertebrates such as sea anemone and starfish although their biological function is still unclear in these organisms. C-Methylation at C9 of fungal sphingosines is similarly catalyzed by SAM-dependent methyltransferases [16]. The methylation takes place at the alkenyl carbon (C9) which is originally derived from the carbonyl carbon of an acetate unit: C1 and C2 of sphingosines are derived from ʟ-serine and carbons from C3 to C18 are from palmitoyl-CoA. To the best of our knowledge, compound 1 is the first example of a simple fatty acid in which the carbonyl carbon of an acetate unit is methylated with SAM (Figure 3D).

aThe 13C signal intensity of each peak in the labeled 1 divided by that of the corresponding signal in the unlabeled, normalized to the peak area of C4 to give an enrichment ratio for enriched peak. The numbers in bold type indicate 13C-enriched atoms from 13C-labeled precursors. bRecorded at 125 MHz (reference δC 77.0).

In summary, chemical investigation of metabolites in a marine-derived Microbulbifer sp. led to the discovery of a unique unsaturated fatty acid, (2Z,4E)-3-methyl-2,4-decadienoic acid (1) in which the carbon originated from the carbonyl carbon of an acetate unit is methylated, providing a quite rare case of C-methylation pattern in fatty acid/polyketide biosynthesis. Compound 1 and its (2E,4E)-isomer were reported previously as synthetic compounds but this is the first finding of 1 as a natural product [12,21]. Very recently, benzoate derivatives were reported from a marine-derived Microbulbifer [22]. Therefore, this is the second report on the small molecule from this underexplored taxon. According to the genome sequence database, biosynthetic genes for NRPS and siderophore are present in Microbulbifer species which will be pursued in our future investigation.

The UV spectrum was recorded on a Shimadzu UV-1800 spectrophotometer. The IR spectrum was measured on a Perkin-Elmer Spectrum 100. NMR spectra were obtained on a Bruker AVANCE 500 spectrometer in CDCl3 using the signals of the residual solvent proton (δH 7.26) and carbon (δH 77.0) as internal standards. HR-ESI-TOFMS were recorded on a Bruker microTOF focus. Sodium [1-13C]acetate was purchased from Cambridge Isotope Laboratories, Inc., and ʟ-[methyl-13C]methionine from Sigma-Aldrich Co. LLC.

Strain C4-6 was isolated from a cultured stony coral (Porites sp.) obtained from an aquarium vendor in Nagasaki, Japan. The coral specimen was washed with 70% ethanol and then washed with sterile natural seawater. A fragment of the coral (ca. 1 g) was homogenized by mortar and pestle with an equal amount of sterile natural seawater (1 mL), and 10-fold serial dilution was carried out up to 10−5 and 0.1 mL of each dilution was spread onto marine agar 2216 (Difco). The plates were kept at 23 °C, and a single colony was repeatedly transferred onto the same agar medium to obtain the pure isolate of strain C4-6. The strain was identified as a member of the genus Microbulbifer on the basis of 99.0% similarity in the 16S rRNA gene sequence (1405 nucleotides; DDBJ accession number LC456787) to Microbulbifer variabilis Ni-2088T (accession number AB167354).

Feeding experiments were carried out using 13C-labeled precursors, sodium [1-13C]acetate and ʟ-[methyl-13C]methionine. The fermentation, extraction and purification of labeled compounds were performed in the same manner as describe for the unlabeled compound. After 24 h of the inoculation into the production medium from the seed culture, supplementation of 13C-labeled precursors was commenced and carried out for four times at 24 h interval. After further 24 h incubation, the whole culture broth was extracted with 1-butanol.

Antimicrobial activity was evaluated by the liquid microculture method using round-bottomed 96-well microtiter plates against six bacteria, Bacillus subtilis ATCC6633, Micrococcus luteus ATCC9341, Staphylococcus aureus FDA209P JC-1, Ralstonia solanacearum SUPP1541, Rhizobium radiobacter NBRC14554, Escherichia coli NIHJ JC-2, and two yeasts Candida albicans NBRC0197 and Saccharomyces cerevisiae S100 as indication strains. Tryptic soy broth (Difco) and Sabouraud dextrose broth (Difco) were used for bacteria and yeasts, respectively. Compound 1 and reference drugs, kanamycin sulfate for bacteria and amphotericin B for yeasts, were made in 2-fold dilution series along the longer side of the plates by sequential transfer of 100 μL aliquots between the adjacent wells, to which the same amount of medium was pre-dispensed. To each well was added a 100 μL suspension of the indication strains prepared at 0.5 McFarland (≈108 cfu/mL) from a culture at the logarithmic growth phase. The solvent vehicle added to the top rows was set at the 0.5% of the final culture volume to avoid the effect on the growth of microbes. The plates were incubated for 48 h at 37 °C for bacteria and at 32 °C for yeasts. The tests were done in triplicate and the MIC values were read from the lowest drug concentrations at which no growth was observed.

Nocarimidazoles C and D, antimicrobial alkanoylimidazoles from a coral-derived actinomycete Kocuria sp.: application of 1JC,H coupling constants for the unequivocal determination of substituted imidazoles and stereochemical diversity of anteisoalkyl chains in microbial metabolites

© 2019 Sharma et al.; licensee Beilstein-Institut.
This is an Open Access article under the terms of the Creative Commons Attribution License (http://creativecommons.org/licenses/by/4.0). Please note that the reuse, redistribution and reproduction in particular requires that the authors and source are credited.
The license is subject to the Beilstein Journal of Organic Chemistry terms and conditions: (https://www.beilstein-journals.org/bjoc) 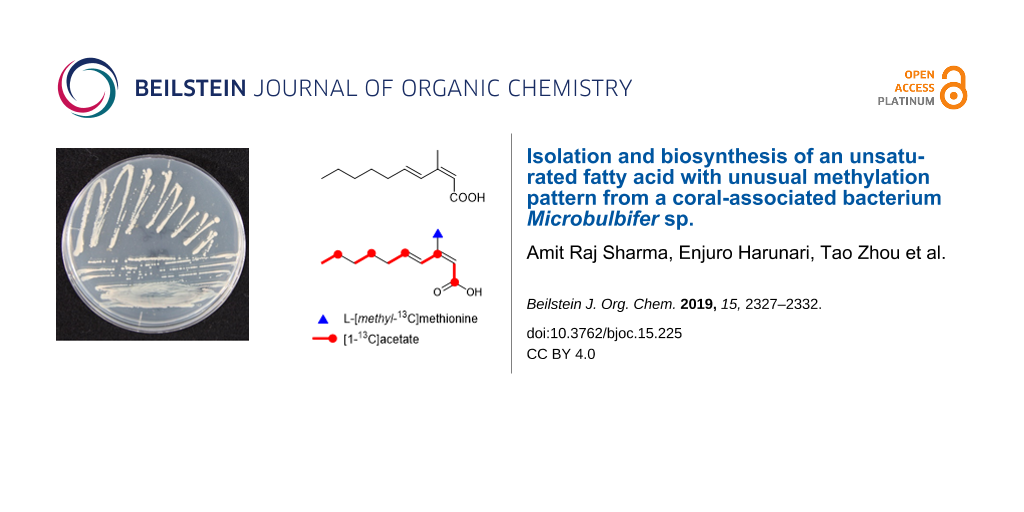