A highly divergent synthesis of regioisomeric thiohydantoins and pseudothiohydantoins spiro-fused to a pharmacologically valuable pyrrole-2-one fragment involving the reaction of [e]-fused 1H-pyrrole-2,3-diones with thioureas was developed. The obtained spiro pseudothiohydantoin derivatives were found to undergo a pseudothiohydantoin–thiohydantoin rearrangement. The reactions were shown to proceed under catalyst-free conditions in good yields, and the products were isolated without applying preparative chromatography methods.

Hydantoin (imidazolidine-2,4-dione) derivatives are omnipresent among biologically active compounds [1]. Many of them are commercially available drugs, for example, anticonvulsants phenytoin [2] and albutoin [3], the muscle relaxant dantrolene [4], or the nonsteroidal antiandrogen agent enzalutamide [5] (Figure 1).

Despite this fact, hydantoin derivatives belong to a special group of scaffolds in medicinal chemistry. Indeed, they are structurally related to rhodanine (2-thioxothiazolidin-4-one), and sometimes are classified as pan-assay interference compounds (PAINS), which are abhorrent in high-throughput screenings [6]. To clarify whether such compounds are privileged scaffolds or promiscuous binders, Mendgen and co-workers performed a systematic comparative study on rhodanines and related structures with respect to their medicinal chemistry properties [7]. As a result, it was shown that such structures could be suitable scaffolds for medicinal chemistry under proper conditions of biological evaluation, while their medicinal chemistry properties dramatically depend on the structure of the five-membered heterocyclic moiety and substituents in the C-5 position [7].

Some pseudothiohydantoins (2-iminothiazolidin-4-ones) are known to undergo a pseudothiohydantoin–thiohydantoin rearrangement (PTR, Scheme 1) [8-11], which is a special case of a quite poorly investigated iminothiolactone–thiolactam rearrangement [12-16]. This reaction offers attractive opportunities for the design of libraries of regioisomeric hydantoin-based compounds for drug discovery.

Spiro heterocycles are relatively new and insufficiently investigated structures in medicinal chemistry [17,18]. The introduction of spiro-fused cyclic moieties in small molecules increases the degree of their structural (shape) complexity, which may lead to the reduced binding promiscuity and improved clinical success [19]. Thus, recent development of 3D modelling methods facilitated investigations on the importance of 3D properties of small-molecular drug candidates [20-22] and inspired chemists to develop diversity-oriented methods for complex 3D molecules [23,24].

1H-Pyrrole-2,3-diones fused at [e]-side (FPDs) 1 can be viewed as a versatile polyelectrophilic synthetic platform (Figure 2), enabling facile preparation of libraries of heterocyclic molecules with an emphasis on skeletal diversity from a single set of reagents [25-27].

One of the most intriguing chemical properties of FPDs 1 is their ability to undergo a cyclocondensation with 1,3-binucleophilic reagents to form spiro[4.4] heterocycles bearing a pharmacophoric pyrrole-2-one moiety (Scheme 3) [28,29]. We employed this feature as a key step in the development of a straightforward and concise synthetic approach towards regioisomeric thiohydantoins and pseudothiohydantoins spiro-fused to a pyrrole-2-one fragment.

To test the preparation of the target spiro-fused pseudothiohydantoins and thiohydantoins, we examined the reaction of FPD 1a with thiourea by heating equimolar amounts of the reagents in toluene for 5 min (until the disappearance of the dark violet color of FPD 1a). The reaction mixture was examined by UPLC–MS. Two major products with m/z = 396 ([M + H]+, ESI+) were observed in a ratio of ≈1:1, which corresponded to adducts of thiourea with FPD 1a. The adducts were isolated, and their structures were elucidated as the desired spiro-fused thiohydantoin 2a and pseudothiohydantoin 3a (Scheme 4).

It should be pointed out that earlier, we have communicated initial data on this transformation [30,31]. However, taking into account more advanced structure elucidation methods employed in the present work (e.g., NMR, single crystal X-ray diffraction), we concluded that the structures of the products were identified incorrectly, and they are revised herein (for a detailed revision see Supporting Information File 1).

Next, to find out whether compounds 2a and 3a were prone to undergo PTR, they were heated in open capillaries at 130 °C for 2 h, and the resulting mixtures were examined by UPLC–MS. As a result, we found that compound 2a did not rearrange, and compound 3a partially converted into its regioisomer 2a due to irreversible PTR (Scheme 5).

aReaction mixtures were stirred until the disappearance of the dark violet color of FPD 1a (about 2–4 h). bAccording to UPLC–MS data. cThe reaction proceeded too slowly, and FPD 1a underwent hydrolysis faster than reaction with thiourea (the reaction vessel was contaminated with water during samplings for analyses).

Obviously, the ratio of products 2a and 3a was dependent not only on the temperature of the reaction, but also on the polarity of the solvent. We found that optimal conditions for dominant formation of pseudothiohydantoin 3a were applied by stirring the reaction mixture at room temperature in ethyl or butyl acetate (Table 1, entries 2 and 6).

For the development of a convenient procedure for thiohydantoin 2a without isolation of its regioisomer 3a being required, we carried out the reaction of FPD 1a with thiourea in various solvents under reflux (Table 2).

aReaction mixtures were refluxed until the disappearance of the dark violet color of FPD 1a (about 5–15 min). bAccording to UPLC–MS data. cThe reagents were mixed prior the heating. dThiourea was added to a boiling solution of FPD 1a.

Using the optimization data, we obtained a series of spiro-fused thiohydantoins 2a–m and pseudothiohydantoins 3a–m by utilizing various FPDs 1a–n (Table 3). The aryl group-bearing FPDs 1a–m reacted facilely to yield the desired compounds 2 and 3, but ethoxycarbonyl group-bearing FPD 1n reacted unselectively, giving a complex mixture of hardly identifiable products due to the occurrence of multiple side reactions involving the ethoxycarbonyl group.

Next, we examined the influence of substituents in the thiourea motif on its reaction with FPDs 1. It was found that monosubstituted thioureas (N-methylthiourea, N-phenylthiourea, N-(4-chlorophenyl)thiourea, N-(3,5-dimethylphenyl)thiourea, N-(4-nitrophenyl)thiourea, and N-1-naphtylthiourea) reacted with FPD 1a unselectively, forming a mixture of four inseparable adducts (the reaction mixtures were analyzed by UPLC–MS) (Scheme 7). Unfortunately, we did not succeed to find any conditions for a selective formation of either of them.

Unexpectedly, the implementation of N-acetylthiourea in the reaction with FPDs 1, both under conditions A and B (see Table 3), afforded only one type of adducts, pseudothiohydantoins 4 (Table 4). Boiling compounds 4 in various solvents and heating them in open capillaries at 130 °C for 12 h did not provoke PTR, and compounds 4 remained unconverted. This phenomenon could be explained by the influence of the electron-withdrawing effect of the acetyl group, which reduced the nucleophilic properties of the acetyl-substituted nitrogen atom in N-acetylthiourea and decreased its reactivity, preventing the formation of regioisomeric compounds.

1,3-Dibutylthiourea reacted smoothly at room temperature in ethyl acetate with FPDs 1 to form mixtures of products 5 and 6 (Scheme 8). Moreover, it was observed that the percentage of compounds 5 in reaction mixtures increased over time upon storage of the solutions. As such, 6 readily underwent PTR, affording the corresponding compounds 5, but unfortunately, we did not succeed to isolate pseudothiohydantoins 6.

The reaction of FPDs 1 with 1,3-dibutylthiourea in 1,4-dioxane resulted in exclusive formation of thiohydantoins 5 upon heating at reflux for 2–4 h (Table 5).

The facility of thiohydantoins 5 formation could be explained by the electron-donating effect of the butyl substituents, which increased the nucleophilicity of the butyl-substituted nitrogen atoms and promoted its attack on the electrophilic center C-3a of FPDs 1.

The reaction of FPDs 1 with 1,3-diphenylthiourea proceeded in a similar manner. Thiohydantoins 7 were predominantly formed when the reaction was conducted at reflux in 1,4-dioxane, and pseudothiohydantoins 8 were formed as main products at room temperature (Table 6).

Notably, the formation of thiohydantoins 7 required longer time in comparison with unsubstituted thiourea and 1,3-dibutylthiourea. Possible reasons for this are the influence of the steric hindrance induced by the phenyl substituents and weakening of the nucleophilic properties of the phenyl-substituted nitrogen atom, which prevented a nucleophilic attack of 1,3-diphenylthiourea on the electrophilic center C-3a of FPDs 1.

The observed PTRs could have proceed through two alternative pathways (Scheme 9), with the first stage being dissociation of the Cspiro–S bond [32] in pseudothiohydantoins PThH, affording intermediate A. Then, A could have further undergone either an intramolecular cyclization by NH attack, forming thiohydantoin ThH (path A), or further dissociation to FPD 1 and thiourea. The latter would subsequently attack FPD 1 with both nucleophilic NH centers, forming thiohydantoin ThH (path B).

The study was performed under the financial support of the Russian Ministry of Education and Science (project no. 4.6774.2017/8.9) and the Government of Perm Krai.

© 2019 Kobelev et al.; licensee Beilstein-Institut.
This is an Open Access article under the terms of the Creative Commons Attribution License (http://creativecommons.org/licenses/by/4.0). Please note that the reuse, redistribution and reproduction in particular requires that the authors and source are credited.
The license is subject to the Beilstein Journal of Organic Chemistry terms and conditions: (https://www.beilstein-journals.org/bjoc) 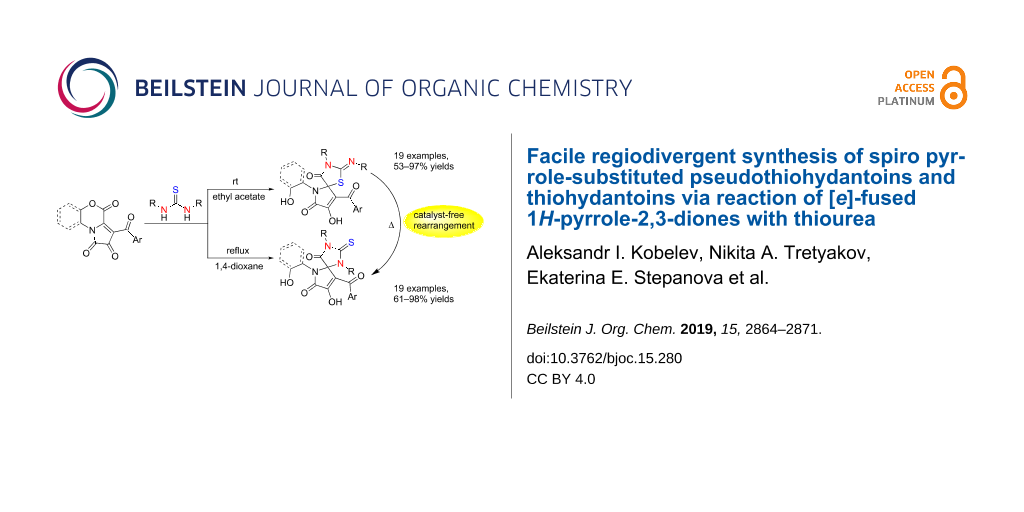