Cherkasov and his group applied the Kabachnik–Fields reaction to synthesize a P-chiral aminophosphine oxide with a 2-pyridyl substituent 3 (Scheme 2) [13].

To the best of our knowledge, only one example can be found for a bis(α-aminophosphine oxide) containing different P-functions that was prepared by the condensation of (octylaminomethyl)dihexylphosphine oxide, paraformaldehyde and di(p-tolyl)phosphine oxide in the presence of p-toluenesulfonic acid in boiling acetonitrile (Scheme 3) [12].

Synthesis of N,N-bis(phosphinoylmethyl)alkylamines containing different substituents on the phosphorus atoms

First, the (aminomethyl)phosphine oxide starting materials 5–7 were synthesized following our previous protocol [11]. Thus, the MW-assisted Kabachnik–Fields reaction of primary amines (butyl-, cyclohexyl- or benzylamine), paraformaldehyde and di(p-tolyl)- or dibenzylphosphine oxide was carried out in acetonitrile at 100 °C for 1 h affording the products with excellent yields (Scheme 4).

In the next step, (aminomethyl)phosphine oxides 5–7 were converted to bis(phosphinoylmethyl)amine derivatives bearing different substituents at the phosphorous atoms (Y2P=O) by reacting them with one equivalent of paraformaldehyde and diphenylphosphine oxide under MW conditions (Scheme 6). The three-component condensations were performed in the absence of any catalyst in acetonitrile as the solvent to overcome the heterogeneity of the reaction mixture. After an irradiation of 1 h at 100 °C, the mixed N,N-bis(phosphinoylmethyl)amines 10a,b, 11a,b and 12a,b were obtained in yields of 92–97% and their structures were confirmed by 31P, 13C and 1H NMR, as well as HRMS measurements. Due to the two differently substituted phosphorous nuclei in the molecules, two signals were observed in the 31P NMR spectra.

The valuable intermediate 9 was then utilized in the synthesis of N,N-bis(phosphinoylmethyl)amines 13a–c (Scheme 7). The condensation of (aminomethyl)diphenylphosphine oxide (9), paraformaldehyde and various secondary phosphine oxides, such as diphenyl, di(p-tolyl) or dibenzylphosphine oxide, at 100 °C for 40 min led to the corresponding N,N-bis(phosphinoylmethyl)amines containing identical (13a) or different substituents on the phosphorus atoms (13b and 13c) in excellent yields (95–97%).

In summary, we have developed an efficient, catalyst-free and MW-assisted method for the synthesis of N,N-bis(phosphinoylmethyl)amines and N,N,N-tris(phosphinoylmethyl)amines bearing different substituents on the phosphorus atoms by the Kabachnik–Fields reaction. This method is a novel approach for the synthesis of the target products. In all, thirteen new derivatives were isolated in high yields and fully characterized.

The above project was supported by the Hungarian Research Development and Innovation Fund (FK123961 and K119202), and in part (E. B.) by the János Bolyai Research Scholarship of the Hungarian Academy of Sciences (BO/00278/17/7) and by the ÚNKP-18-4-BME-131 New National Excellence Program of the Ministry of Human Capacities. The authors thank for Zoltán Márta to the HRMS measurements.

© 2019 Bálint et al.; licensee Beilstein-Institut.
This is an Open Access article under the terms of the Creative Commons Attribution License (http://creativecommons.org/licenses/by/4.0). Please note that the reuse, redistribution and reproduction in particular requires that the authors and source are credited.
The license is subject to the Beilstein Journal of Organic Chemistry terms and conditions: (https://www.beilstein-journals.org/bjoc) 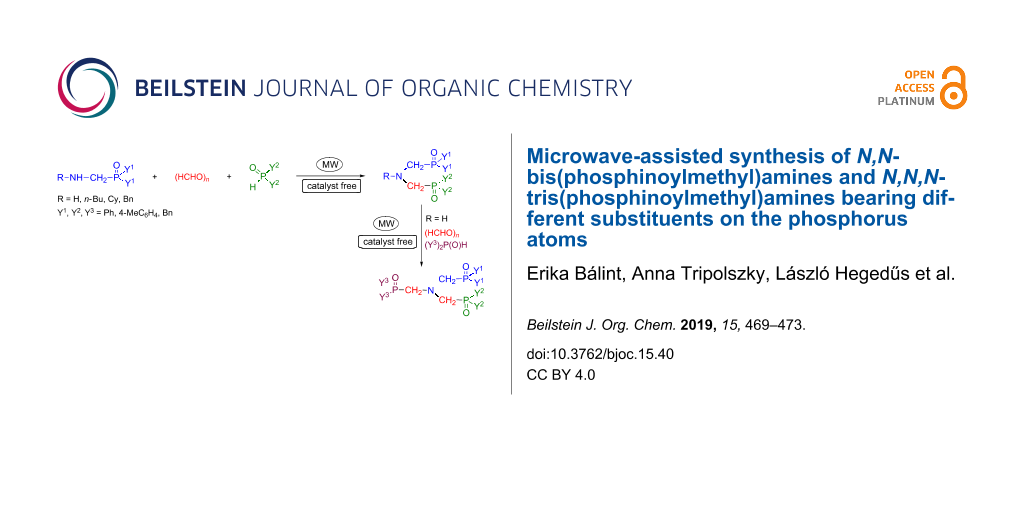