Design of indole- and MCR-based macrocycles as p53-MDM2 antagonists


All articles from this author
Beata Łabuzek


All articles from this author
Tad A. Holak

Macrocycles were designed to antagonize the protein–protein interaction p53-MDM2 based on the three-finger pharmacophore F19W23L25. The synthesis was accomplished by a rapid, one-pot synthesis of indole-based macrocycles based on Ugi macrocyclization. The reaction of 12 different α,ω-amino acids and different indole-3-carboxaldehyde derivatives afforded a unique library of macrocycles otherwise difficult to access. Screening of the library for p53-MDM2 inhibition by fluorescence polarization and 1H,15N HSQC NMR measurements confirm MDM2 binding.

Macrocycles are the chemical entities that are consisting of a 12-membered or even bigger ring. It is estimated that 3% of the known natural products consists of a macrocyclic ring [1-5]. Compared to macrocycles in synthetic molecules, the aforementioned occurrence is still over proportional; for that reason, these compounds have delighted scientists worldwide due to their special physicochemical properties, their roles in biological systems and the associated synthetic challenges [6,7]. However, only few synthetic methods allow for the convergent and fast access to a large macrocyclic chemical space [8-10]; most of the times their synthesis is complex, multistep and sequential [11,12]. For this reason a great effort is ongoing to utilize multicomponent reactions for the synthesis of macrocycles [8,13-25].

The p53 protein is a well-studied protein which has a leading role in protecting our organism from cancer. It was found that most of the human cancers have either mutated the p53 itself or the p53 pathway is inhibited. The latter group of tumors retains the wild type p53 (wt-p53) but its pathway is inactivated by negative regulators, mainly the MDM2 and MDMX proteins. Thus, the design and synthesis of an inhibitor of the MDM2–p53 interaction could enable p53 and reverse tumor formation [26-28]. Based on our knowledge to antagonize the oncogenic protein–protein interaction p53–MDM2 [23,29-40] we designed macrocyclic inhibitors in continuation of our previous work [13,23]. Herein, an indole-based macrocycle synthesis is reported in a one-pot fashion based on Ugi macrocyclization with readily available α,ω-amino acids. Moreover, in continuation of our efforts in the design and synthesis of macrocycles targeting the p53–MDM2 interaction demonstrating the potential of these indole-based macrocycles, a subset of them was screened searching for MDM2 inhibitors. Compared to our previous indole-based macrocycles 1 following a different strategy (employing a classical Ugi-4C as the key reaction) [23], this one-pot Ugi macrocyclization leading to macrocycles 2 offers speed (one-pot procedure with one purification step), much better yields, no need of expensive catalysts as in ring-closing metathesis (RCM) reaction and higher complexity/diversity on the macrocyclic ring, e.g., insertion of heteroatoms that could improve the ADMET properties (Scheme 1) [4].

Based on our previous studies [13], unprotected diamines 3 were reacted in one-step with cyclic anhydrides 4 at rt affording the appropriate α,ω-amino acids 5 in excellent yields (see Supporting Information File 1). Elongated diamines (n = 2–4, 6, 8 and 10) and cyclic anhydrides that bear a heteroatom in the 4-position as oxygen or sulfur (Y = O, S, Scheme 2) were employed in order to enhance the diversity of our macrocycles [4]. Thus, in a parallel way, we readily synthesized 12 different amino acids which were subsequently subjected to the Ugi macrocyclization.

After quite some optimization, we improved the Ugi-macrocyclization procedure compared to our previous findings utilizing microwave irradiation (see Supporting Information File 1); Firstly, the corresponding amino acid was irradiated with indole-3-carboxaldehyde derivatives 6 using MeOH as solvent (5 mL) at 120 °C for 1 h. Then, tert-butyl isocyanide was added, diluted with more MeOH and irradiated again the reaction mixture at 120 °C for an additional 1 h in a final concentration of 0.1 M (Scheme 3). By this way, a rapid, one-pot access to macrocycles 2a–p was achieved otherwise very difficult to synthesize in relatively good yields (29–60%). 16 different indole-based macrocycles were synthesized with their size varying from 11–13, 15, 17 and 19 atoms (Scheme 3).

Our previously introduced three-point pharmacophore model on mimicking the hot triad (Phe19, Trp23 and Leu26, F19W23L26) was the basis of the evaluation of the current derivatives as potent inhibitors [33]. The indole moiety could be used not only to constrain the two other substituents but also as an “anchor” mimicking the Trp23. The bulky tert-butyl group would mimic the Phe19 and the macrocyclic ring would fill the Leu26 sub-pocket as shown by our docking studies (Figure 1A,B, Figure S4 in Supporting Information File 1). Thus, extending our previous work [13], the Leu26 subpocket was probed by utilizing the different ring sizes and the different heteroatoms (oxygen or sulfur) of our macrocyclic library. In addition, the influence of the chlorine atom in the 6-position of the indole ring (Figure 1C) was examined. Macrocycles 2a–j consist of an oxygen linker whereas 2g–j bear also a chlorine atom in the 6-position in the indole ring. Macrocycles 2k–p incorporate both a sulfur linker and the chlorine on the indole ring (Scheme 3).

In order to exclude false positive hits, two biorthogonal assays were chosen; 1H,15N HSQC NMR and fluorescence polarization (FP, Table 1). FP assay was employed to determine the inhibitory affinities (Ki) of the derivatives against MDM2 as previously described [36]. Besides 2h (Ki = 2.3 μΜ, Kd = 12.1 μΜ), it was shown that 2i demonstrated a promising activity with a Ki of 5.5 μΜ. Furthermore, 1H,15N HSQC showed a Kd of 4.8 μΜ (Table 1, Figure 2). Moreover, macrocycles 2g and 2n demonstrated a Kd of 9 μΜ and 17 μΜ, respectively (Table 1). With this preliminary analysis, it was found that a ring size of 15–17 atoms and an oxygen as the heteroatom linker improves the binding affinity. All the active macrocycles have a 6-chloro-substituted indole core. It is well established that at the bottom of the Try23 pocket a hydrophobic small subpocket exists which is formed by Phe86, Ile103, Leu82 and Leu57. This pocket when filled with a smaller hydrophobic substituent such as -Cl boosts the inhibitor activity in accordance with literature [33].

an.a. no activity against MDM2 protein. Ki and Kd values were calculated based on fluorescence polarization binding and 1H,15N HSQC NMR assay, respectively.

We effectively synthesized p53-MDM2 antagonists based on an artificial macrocyclic scaffold. 16 different derivatives were obtained and screened. The aforementioned artificial macrocycles combine the indole ring, a motif found in many bioactive molecules with the drug-like properties of a non-peptide macrocycle. We hypothesize that these chimeric derivatives of an indole and a macrocycle will offer new potential on specific PPIs and other postgenomic targets as it was demonstrated with the p53-MDM2 interaction.

© 2019 Neochoritis et al.; licensee Beilstein-Institut.
This is an Open Access article under the terms of the Creative Commons Attribution License (http://creativecommons.org/licenses/by/4.0). Please note that the reuse, redistribution and reproduction in particular requires that the authors and source are credited.
The license is subject to the Beilstein Journal of Organic Chemistry terms and conditions: (https://www.beilstein-journals.org/bjoc) 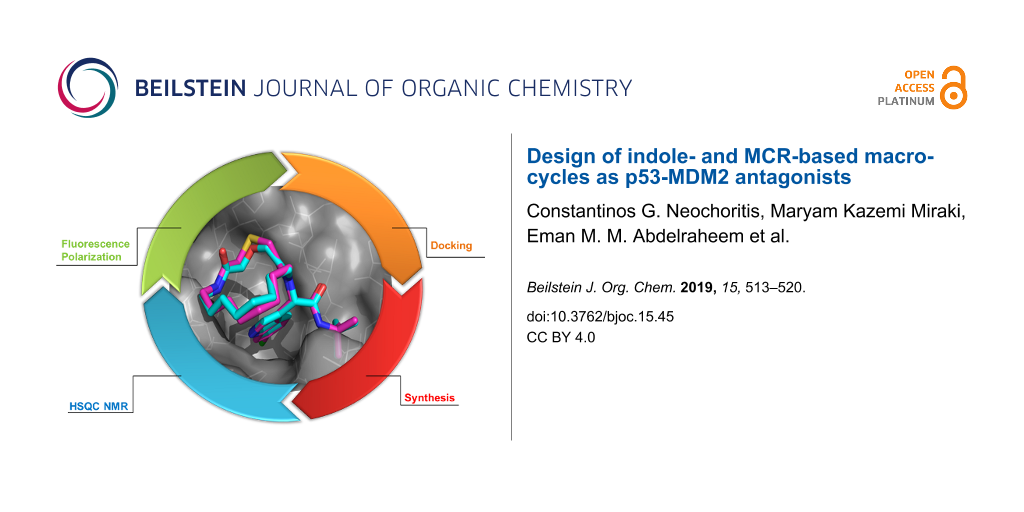