All articles from this author
Kazunori Nagao


All articles from this author
Hirohisa Ohmiya

The allylic cross-coupling using aromatic aldehydes as α-alkoxyalkyl anions is described. The synergistic palladium/copper-catalyzed reaction of aromatic aldehydes, allylic carbonates, and a silylboronate produces the corresponding homoallylic alcohol derivatives. This process involves the catalytic formation of a nucleophilic α-silyloxybenzylcopper(I) species and the subsequent palladium-catalyzed allylic substitution.

α-Alkoxy-substituted carbanions (α-alkoxyalkyl anions) are useful C(sp3) nucleophiles for the construction of alcohol units found in a majority of pharmaceuticals, agrochemicals and bioactive natural products. Generally, α-alkoxyalkyl anions are presynthesized as stoichiometric organometallic reagents such as organolithium, organozinc, organocuprate, organostannane, organosilane and organoboron compounds [1-6]. Alternatively, we showed that easily available aromatic aldehydes can be used as α-alkoxyalkyl anions for catalytic carbon–carbon bond formations [7-9]. For example, a nucleophilic α-silyloxybenzylcopper(I) species can be generated catalytically from aromatic aldehydes through the 1,2-addition of a silylcopper(I) species followed by [1,2]-Brook rearrangement and then successfully trapped with aryl bromides under palladium catalysis (Scheme 1). This system was extended to an asymmetric version using the chiral α-silyloxybenzylcopper(I) species having a chiral NHC ligand. In the asymmetric system, one example of allylic carbonate was used as the carbon electrophile [8,10,11]. This paper describes in full detail the racemic system using allylic carbonates. The allylic cross-coupling of aromatic aldehydes and allylic carbonates with a silylboronate by the merging of a copper–N-heterocyclic carbene catalyst and a palladium–bisphosphine catalyst produced homoallylic alcohol derivatives [12-14].

Specifically, the three-component allylic cross-coupling reaction of benzaldehyde (1a, 0.4 mmol), tert-butyl cinnamyl carbonate (2a, 0.2 mmol) and (dimethylphenylsilyl)boronic acid pinacol ester [PhMe2SiB(pin)] (0.4 mmol) occurred in the presence of catalytic amounts of Pd(OCOCF3)2 (3 mol %), DPPF (3 mol %), (SIPr)CuCl (15 mol %) and KOt-Bu (25 mol %) in toluene at 80 °C to afford homoallylic alcohol derivative 3aa in 64% yield (based on 2a) (Scheme 2). The reaction yielded small amounts of side products such as cinnamylsilane and benzyl silyl ether, which are derived from the Pd-catalyzed allylic silylation of 2a and the Cu-catalyzed silylation of 1a and the subsequent [1,2]-Brook rearrangement, respectively. In this coupling reaction, (SIPr)CuCl was a slightly better copper complex than (IPr)CuCl (62%), (SIMes)CuCl (60%) and (IMes)CuCl (53%) in terms of the chemical yield. Notably, the allylic cross-coupling reaction did not occur at all without Pd(OCOCF3)2–DPPF or (SIPr)CuCl, and thus the palladium and copper catalysts cooperatively acted in the allylic cross-coupling.

Scheme 3 shows the substrate range of aromatic aldehydes 1 and allylic carbonates 2. Methyl, tert-butyl and fluoro substituents were tolerated at the ortho- or para-positions of the aromatic aldehyde (3ba–da). 2,6-Dimethylphenyl- or 1-naphthyl moieties as the γ-substituent of the primary allylic carbonate were tolerated in the reaction (3ab and 3ac). Cinnamyl carbonates having a fluoro or acetal substituent were also suitable coupling partners (3ad and 3ae).

The synergistic palladium/copper catalysis was used for the reaction of a secondary allylic carbonate. For example, the allylic cross-coupling of 2a’, a constitutional isomer of 2a, with benzaldehyde (1a) afforded the linear allylation product 3aa with complete regioselectivity. The symmetric secondary allylic carbonate was converted to the corresponding homoallylic alcohol derivative in 50% yield (3af).

To gain understanding into the mechanism of this synergistic palladium/copper-catalyzed allylic cross-coupling, a stoichiometric experiment was conducted (Scheme 4). The reaction of the SIPr-ligated α-silyloxybenzylcopper 4 with the cinnamyl–palladium complex 5, which was prepared in situ from [(cinnamyl)PdCl]2 and DPPF, gave the corresponding homoallylic alcohol derivative 3aa.

Based on previous reports and the outcome obtained by the stoichiometric experiment in Scheme 4, a possible reaction pathway involving a cooperative action of palladium and copper catalysis can be proposed as illustrated in Scheme 5. The reaction of SIPr-ligated CuCl (A), KOt-Bu and a silylboronate produces a silylcopper(I) species B. The 1,2-addition of silylcopper(I) B to the aromatic aldehyde 1 [15-19] and the subsequent [1,2]-Brook rearrangement from the obtained α-silyl-substituted copper(I) alkoxide C forms the key intermediate, an α-silyloxybenzylcopper(I) species D. The transmetallation between D and an allylpalladium(II) species F that is generated through the oxidative addition of an allylic carbonate 2 across a palladium(0)–DPPF complex E, followed by reductive elimination from G produces the homoallylic alcohol 3 and then regenerate A and E for the next catalytic cycle [20-23].

In summary, we developed an umpolung strategy for catalytically formed α-alkoxyalkyl anions from aromatic aldehydes for the use in allylic cross-coupling reactions. The synergistic palladium/copper-catalyzed reaction of aromatic aldehydes, allylic carbonates, and a silylboronate delivered the homoallylic alcohol derivatives. This process involves the catalytic formation of a nucleophilic α-silyloxybenzylcopper(I) species and the subsequent palladium-catalyzed allylic substitution.

© 2020 Yuasa et al.; licensee Beilstein-Institut.
This is an Open Access article under the terms of the Creative Commons Attribution License (https://creativecommons.org/licenses/by/4.0). Please note that the reuse, redistribution and reproduction in particular requires that the authors and source are credited.
The license is subject to the Beilstein Journal of Organic Chemistry terms and conditions: (https://www.beilstein-journals.org/bjoc) 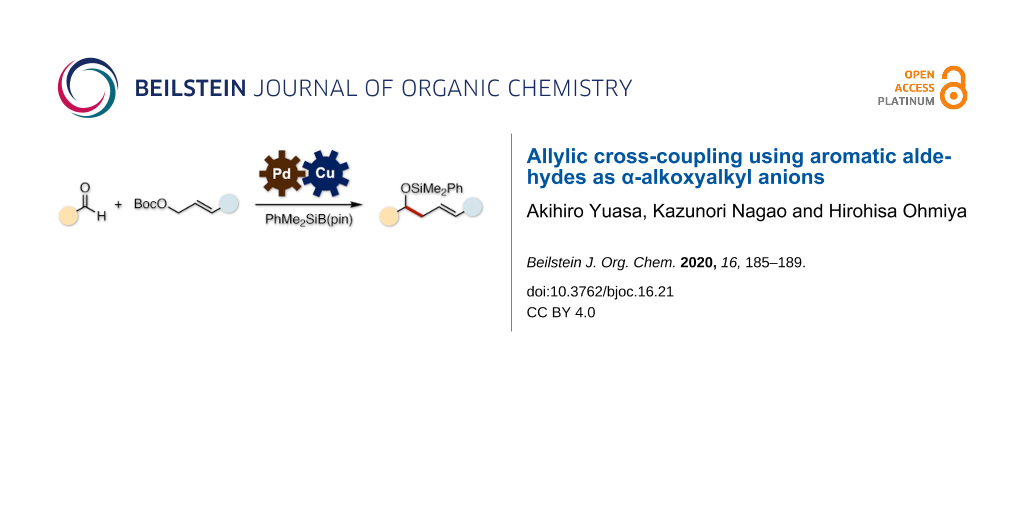