Construction of pillar[4]arene[1]quinone–1,10-dibromodecane pseudorotaxanes in solution and in the solid state

We report novel pseudorotaxanes based on the complexation between pillar[4]arene[1]quinone and 1,10-dibromodecane. The complexation is found to have a 1:1 host–guest complexation stoichiometry in chloroform but a 2:1 host–guest complexation stoichiometry in the solid state. From single crystal X-ray diffraction, the linear guest molecules thread into cyclic pillar[4]arene[1]quinone host molecules in the solid state, stabilized by CH∙∙∙π interactions and hydrogen bonds. The bromine atoms at the periphery of the guest molecule provide convenience for the further capping of the pseudorotaxanes to construct rotaxanes.

As a new class of supramolecular macrocyclic hosts, pillararenes have received extensive attention in recent years due to their unique pillar structures and rich environmental responsiveness [24-29]. There are more and more reports on pillararenes complexing with different guest molecules to construct pseudorotaxanes [30-35]. Previously, our group first demonstrated that alkyl chains can be encapsulated in the pillar[5]arene cavity, forming [2]pseudorotaxanes driven by CH∙∙∙π interactions [36,37]. This discovery facilitated the preparation of threaded structures based on the pillar[5]arene–alkyl chain recognition motif. Benefiting from these results, various compounds with different substituents on the alkyl chains have been used to prepare pseudorotaxanes with pillar[5]arenes and have opened potential applications in different fields [38-43].

So far, fabricating pseudorotaxanes containing more than two components is still a difficult task. Herein, we report new pseudorotaxanes based on the pillar[4]arene[1]quinone H and 1,10-dibromodecane (G, Scheme 1). The pillar[4]arene[1]quinone H, which is composed of four 1,4-diethoxybenzene subunits and one benzoquinone subunit, was prepared by partial oxidation of perethylated pillar[5]arene according to previous reports [44,45]. We found that H and G can be used to build a [3]pseudorotaxane in the solid state but a [2]pseudorotaxane in solution.

Host–guest complexation in the solid state

Cocrystals of H and G were obtained by slow evaporation of the solution in methanol. The X-ray crystallography revealed that two host molecules complex one guest molecule, forming a [3]pseudorotaxane in the solid state (Figure 1). In the crystal structure, the alkyl chain of the guest is threaded through the cavities of two host molecules, which is stabilized by multiple CH∙∙∙π interactions and hydrogen bonds. Specifically, there are four hydrogen atoms on the guest molecule to form multiple CH∙∙∙π interactions with the 1,4-diethoxybenzene subunits of the host. In addition, the two bromine atoms at the periphery of the guest molecule are outside the host cavities and form moderate hydrogen bonds with the hydrogen atoms on the ethoxy groups. It is worth mentioning that we did not find any interaction of the benzoquinone subunit of the host with the guest molecule.

In order to further study the host–guest binding properties of H and G, we explored the complexation in solution by 1H NMR spectroscopy. As depicted in Figure 2, after the addition of 1.0 equiv of G to a solution of H, all protons on G shifted upfield, which indicated the threading of the alkyl part of the guest into the electron-rich cavity of the host, confirming the complexation between H and G.

Matrix-assisted laser desorption/ionization time-of-flight mass spectrometry (MALDI–TOF MS) was conducted to investigate the complexation properties. However, no signal related to the complex but only peaks of H were found, implying weak host–guest interactions between H and G (Figures S3 and S4, Supporting Information File 1).

A Job plot based on the proton NMR data was made to determine the complexation stoichiometry between H and G. The formation signified a 1:1 binding stoichiometry in chloroform-d at room temperature (Figures S5 and S6, Supporting Information File 1). Combined with the mass spectrometry results, we believed that the differences between the stoichiometric ratio of the complexation in the solid state and in solution could be owing to the competitive role of solvent molecules in the combination of H and G. The association constant (Ka) calculated by the nonlinear curve fitting method was 20.0 ± 2.4 M−1 (Figures S7 and S8, Supporting Information File 1), which agreed well with the inference above.

To further explore the geometry of the complexation in solution, we performed a NOESY study (Figure 3). Only one correlative peak was observed between the protons H1 of H and Ha of G, which agreed with the formation of the complexation; the alkyl chains of G were encapsulated in the cavity of H. This further indicated that the interactions between H and G were weak.

UV–vis absorption properties of the complex in solution

Based on the UV–vis properties of H, we wondered the influence of G on the optical properties of H, so an UV–vis spectroscopy experiment was carried out. We investigated the changes in the UV–vis absorption of the complex at different guest concentrations corresponding to 0.5 and 1 equiv. As shown in Figure 4, the concentration of G did not affect the absorption maximum. This also indicated that the interactions between H and G were weak.

In summary, we constructed novel pseudorotaxanes based on a pillar[4]arene[1]quinone and 1,10-dibromodecane. Single crystal X-ray diffraction analysis showed an alkane molecule threaded into the cavities of two pillar[4]arene[1]quinone molecules, forming a [3]pseudorotaxane in the solid state. However, 1H NMR experiments revealed that the pillar[4]arene[1]quinone encapsulated the guest molecule with a 1:1 stoichiometry to form a [2]pseudorotaxane in solution. One possible reason may be that the interactions between H and G were weak and that there was a complexation competition with solvent molecules. Furthermore, the addition of G did not change the maximum UV–vis absorption wavelength of H. The bromine atoms at the periphery of the guest molecule provide convenience for the further capping of the pseudorotaxanes to construct rotaxanes, which will broaden the range of potential applications of pillararene derivatives for the manufacture of sophisticated supramolecular architectures and functional supramolecular systems.

We acknowledge sincerely the financial support of the National Natural Science Foundation of China NSFC (22035006) and the fundamental research funds for the central universities.

Multiple threading of a triple-calix[6]arene host

© 2020 Sheng et al.; licensee Beilstein-Institut.
This is an Open Access article under the terms of the Creative Commons Attribution License (https://creativecommons.org/licenses/by/4.0). Please note that the reuse, redistribution and reproduction in particular requires that the author(s) and source are credited and that individual graphics may be subject to special legal provisions.
The license is subject to the Beilstein Journal of Organic Chemistry terms and conditions: (https://www.beilstein-journals.org/bjoc/terms) 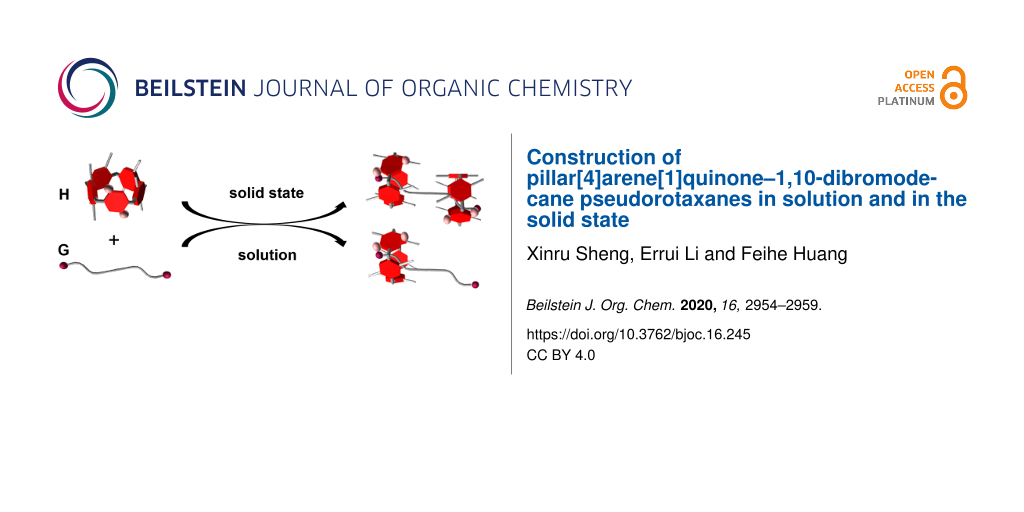