All articles from this author
Andhika B. Mahardhika


All articles from this author
Christa E. Müller

A novel, versatile approach for the synthesis of unsymmetrical 3,3'-diindolylmethanes (DIMs) with a quaternary carbon center has been developed via iodine-catalyzed coupling of trifluoromethyl(indolyl)phenylmethanols with indoles. In contrast to previously reported methods, the new procedure is characterized by chemoselectivity, mild conditions, high yields, and scalability to obtain gram amounts for biological studies. Selected compounds were found to display affinity for cannabinoid receptors, which are promising drug targets for the treatment of inflammatory and neurodegenerative diseases.

Diindolylmethanes (DIMs) represent an important class of indole alkaloids, that are constituents of pharmaceuticals [1-7] and agrochemicals [8,9]. DIM derivatives possess a variety of biological activities (Figure 1) [10]. Unsubstituted DIM (I), for example, exhibits antimicrobial [5], anticancer [11-13], and anti-inflammatory effects (Figure 1) [14]. There is preclinical evidence for activity against several types of cancer [15], and DIM has been clinically evaluated for the treatment of prostate cancer [16] and showed promise for the treatment of cervical dysplasia [17]. The related trisindoline (II) was reported to possess antibiotic activity [18], while DIM derivatives III and IV also showed anticancer activities (Figure 1). Owing to their exciting biological activities, DIM derivatives have recently received increasing attention from synthetic organic chemists, biologists, and pharmacologists.

In general, DIMs can be synthesized via electrophilic substitution of indoles by aldehydes or ketones in the presence of conventional Lewis or Brønsted acids as catalysts [19]. This strategy is straightforward, but it always only provides symmetrical DIMs. The synthesis of unsymmetrical DIM derivatives, however, remains challenging, and merely sporadic examples are reported in literature [20,21].

Methods for the introduction of fluorinated groups into organic molecules are of high interest due to fluorine’s unique physical and chemical properties, such as its small size, high electronegativity, and high C–F bond dissociation energy [22-24]. Organofluoro compounds developed as drug molecules often display increased metabolic stability and bioavailability compared to non-fluorinated analogs [25]. Considering the ever-growing demand for organofluorine compounds, the development of new methodologies that allow the incorporation of fluorine atoms into bioactive molecules is highly desired and will also be addressed herein.

Recently, the use of indol-3-ylmethanols as electrophiles has emerged as a powerful strategy for constructing synthetically valuable indol-3-yl-containing molecules. In particular, the reaction of indol-3-ylmethanols with indoles has become a useful route for the preparation of tertiary unsymmetrical 3,3'-DIMs [26-35]. However, synthetic methods for efficient synthesis of unsymmetrical 3,3'-DIMs with a quaternary carbon center, including trifluoromethyl-substituted 3,3'-DIMs, are still rare.

Sasaki et al. reported the reaction of trifluoromethyl(indolyl)phenylmethanols with indoles in the presence of trifluoroacetic acid (TFA) and CHCl3 (Figure 2) [36]. Very recently, Ling et al. reported the same reaction in the presence of Ga(OTf)3 in acetonitrile (Figure 2) [37]. Although these methods are certainly useful, they have several undeniable drawbacks, including the use of heavy-metal catalysts and the necessity of employing indoles bearing bulky substituents at their 2-position (Ling et al.), or the need for chlorinated solvents (Sasaki et al.), as well as difficulty to scale up the reactions to a multigram scale, as well as a generally rather limited substrate scope. Therefore, finding a robust method with a broad substrate scope and functional group tolerance is highly desirable.

As part of our continuous efforts to prepare biologically active DIM derivatives [38], we herein report an innovative approach to synthesize unsymmetrical 3,3'-diindolylmethanes (DIMs) with a fluoromethyl-containing quaternary carbon center via an iodine-catalyzed coupling reaction of trifluoromethyl(indolyl)phenylmethanol with indole derivatives. This method has also been extended to the synthesis of pentafluoro-ethylated and heptafluoro-propylated DIMs in excellent yields. Selected compounds were evaluated in radioligand binding studies for their affinities towards cannabinoid CB1 and CB2 receptors.

Optimization of the reaction

The reaction conditions were optimized using 2,2,2-trifluoro-1-(5-methoxy-1H-indol-3-yl)-1-phenylethan-1-ol (1a, 5 mmol) and 1H-indole (2a, 5 mmol) as model substrates (Table 1). At first, the reaction was attempted in trifluoroethanol (TFE), and water, respectively, as these solvents had been utilized for the preparation of unsymmetrical DIMs from (1H-indol-3-yl)(phenyl)methanol by Xiao and co-workers [39,40]. However, no product was formed in either solvent even at high temperatures (Table 1, entries 1–3). This is likely due to the steric hindrance of the CF3-substituted quaternary carbon atom in substrate 1a. Therefore, the solvent was changed to H2SO4 (5%) in water (Table 1, entry 4) or glacial acetic acid (entry 5), and the reactions were performed at room temperature. While no reaction occurred in 5% H2SO4, traces of product were observed in acetic acid (entry 5). Therefore, the reaction mixture was gradually heated to 50 °C (Table 1, entry 6), 80 °C (entry 7), and 100 °C (entry 8). To our delight, the formation of the expected product was steadily increased to 32, 47, and 56%, respectively. Nevertheless, it was not possible to further increase the yield of the product using this solvent.

aReactions of 1a (5 mmol) and 2a (5 mmol) were performed in 5 mL of solvent. bIsolated yields after column chromatography. cNo reaction. MeCN, acetonitrile. rt, room temperature.

We further extended this protocol to the preparation of unsymmetrical pentafluoroethylated and heptafluoropropylated DIM derivatives (Table 4). The (indol-3-yl)phenylmethanol derivative bearing a pentafluoroethyl residue (1j) was efficiently reacted with a series of indole derivatives (2d, 2e, 2h, 2j, and 2k) substituted either both electron-donating or electron-withdrawing groups, and provided the desired products (3y: 96%, 3z: 89%, 3aa: 90%, 3ab: 86%, 3ac: 92%, 3ad: 94%) in excellent yields (86–96%).

The (indol-3-yl)phenylmethanol derivative bearing a heptafluoropropyl residue (1k) underwent coupling reactions with indole derivatives (2a, 2d, and 2e) and yielded the expected products (3ae: 65%, 3af: 72%, 3ag: 70%) in very good yields (65–72%). It was observed that the yield of heptafluoropropylated DIMs was slightly lower compared to their pentafluoroethylated congeners (compare 3y: 96% vs 3af: 72%, and 3aa: 90% vs 3ag 70%).

Next, the necessity of the fluoroalkyl substituent was investigated to study the scope of the reaction. The non-fluorinated (indol-3-yl)phenylmethanol derivative bearing a methyl residue (1l) and 2c or 2d were reacted applying the optimized conditions. However, the desired products 3ah and 3ai were not produced (Figure 3). These experiments indicated that the presence of a fluoroalkyl substituent was indeed essential for the alkylation of indoles.

The unsubstituted diindolylmethane (I, Figure 1) was previously reported to bind to the cannabinoid receptors, CB1 (Ki 4.3 µM) and CB2 (Ki 1.1 µM) [41]. Both receptors are considered important therapeutic targets, e.g. for neurodegenerative and inflammatory diseases. Selected final products (3a, 3b, 3e, 3g, 3h, 3n, 3ad) were tested for their binding affinities towards human CB1 and CB2 receptors (Table 5).

At the CB1 receptor, compound 3a with a methoxy substituent on one of the two indole rings showed equipotent affinity to lead compound I, while introducing an additional 4-methoxy moiety into the second indole ring reduced binding affinity (3b). Compounds bearing 5-OMe,6'-F (3e), 5-OMe,7'-Br (3g), and 5-OMe,5',6'-diF substitution (3h) exhibited similar binding affinities to lead compound I. 5,6-DiF-DIM derivative 3n (CB1: Ki 2.04 µM) showed a slightly improved binding affinity compared to lead compound I. These results suggest that compounds with small substituents like fluoro on only one indole ring are favorable for CB receptor binding. The pentafluoroethylated DIM derivative 3ad was the best CB1 ligand of the present series with a Ki value of 1.82 µM. The binding curves of 3e and 3ad are depicted in Supporting Information File 1, Figure S1.

Based on previous reports [25-35,43-53], a plausible reaction mechanism is proposed for the synthesis of 3a as an example, as depicted in Figure 5. We suggest that the reaction is initiated by iodine-mediated activation of the secondary alcohol in compound 1a (A), followed by elimination of HOI to generate the vinyliminium ion species B (see mesomeric structure C) [52]. This electrophilic intermediate undergoes a C3-selective Friedel−Crafts reaction with 2a to deliver intermediate D, and the catalyst I2 is regenerated by the reaction of HOI and I− (see C to D in box highlighted by dashed line). The intermediate D is stabilized by aromatization yielding product 3a and H2O.

The described novel and efficient synthetic protocol provides a convenient access to a wide range of unsymmetrical trifluoromethylated 3,3'-diindolylmethanes via I2-catalyzed Friedel–Crafts alkylation reaction of trifluoromethylated (indol-3-yl)-1-phenylethan-1-ols with substituted indoles. The method was also extended to the synthesis of pentafluoroethylated and heptafluoropropylated-DIMs. It constitutes an important addition to the active field of DIM syntheses facilitating the preparation of unsymmetrical quaternary DIMs without the need for chlorinated solvents, high temperatures, or heavy-metal catalysts. A broad range of substrates is tolerated and the reaction is suitable for large-scale preparation of the target compounds. The outlined methodology allows for the rapid generation of structurally diverse DIM derivatives to study structure–activity relationships, to optimize biological activity and other properties in order to prepare tool compounds and future drugs. Several compounds displayed micromolar binding affinities toward CB1 and CB2 receptors acting primarily as CB1 receptor antagonists/inverse agonists. We are confident that our straightforward new approach will enable us and others to extensively investigate these bioactive molecules and their targets in future studies.

T.P. is grateful to the Alexander von Humboldt (AvH) foundation and to Bayer Pharma for a postdoctoral fellowship. ABM and CEM were supported by the Deutsche Forschungsgemeinschaft (DFG) within the Research Training Group GRK 1873 “Pharmacology of 7TM-receptors and downstream signaling pathways”. A.B.M., L.L.W., and C.E.M. are grateful to the German Federal Ministry for Education and Research (BMBF) and the Bonn International Graduate School of Drug Sciences (BIGS DrugS) for financial support. A.B.M. was supported by the Ministry of Finance of Indonesia in the scheme of Indonesia Endowment Fund for Education (Lembaga Pengelola Dana Pendidikan (LPDP).

© 2021 Pillaiyar et al.; licensee Beilstein-Institut.
This is an Open Access article under the terms of the Creative Commons Attribution License (https://creativecommons.org/licenses/by/4.0). Please note that the reuse, redistribution and reproduction in particular requires that the author(s) and source are credited and that individual graphics may be subject to special legal provisions.
The license is subject to the Beilstein Journal of Organic Chemistry terms and conditions: (https://www.beilstein-journals.org/bjoc/terms) 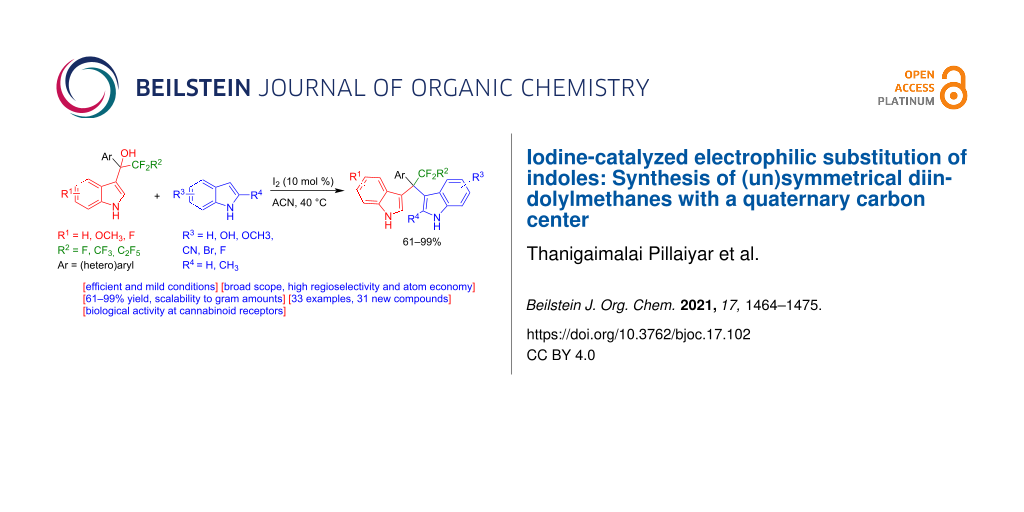