All articles from this author
Yue Li


All articles from this author
Tiao Huang


All articles from this author
Dulin Kong


All articles from this author
Mingshu Wu

3-Monohalooxindole heterocycles are not only present as a characteristic structural motif in numerous biological and medicinal molecules [1,2] but also possess dual nucleophilic and electrophilic character at the C-3 position. Owing to the dual nature at the C-3 position, 3-monohalooxindoles have emerged as a class of versatile building blocks for the construction of various 3,3-disubstituted oxindole and spirooxindole derivatives, such as spirocyclopropaneoxindoles [3-11], 3-β-amino-substituted 3-halooxindoles [12-14], five-membered-ring-based spirooxindoles [15-18] and 3-alkyl-substituted 3-fluorooxindoles (Figure 1) [19]. Despite the importance of 3-monohalooxindoles in organic synthesis and medicinal chemistry, only a few methods for the synthesis of these 3-monohalooxindoles have been reported. Recently, Xu and co-workers disclosed the application of N-fluorobenzenesulfonimide (NFSI) and NBS (N-bromosuccinimide), respectively, as the halogen sources, with diazoacetamide under catalyst-free conditions via a carbene pathway, which constructed 3-fluorooxindoles and 3-bromooxindoles (Scheme 1, reaction 1) [20,21]. Then, the Prathima group established an expedient approach for the direct oxidative chlorination of indole-3-carboxaldehyde to 3-monochlorooxindoles using a combination of NaCl and oxone as the chlorine source and oxidant in a CH3CN/H2O 1:1 system (Scheme 1, reaction 2) [22].

Nearly at the same time, Yu and co-workers reported controllable mono- and dichlorooxidation of indoles with hypervalent iodine species in DMF/CF3CO2H/H2O at room temperature, which generated 3,3-dichlorooxindoles and 3-monochlorooxindoles, respectively (Scheme 1, reaction 3) [23]. Apart from these methods, most traditional approaches to 3-monohalooxindoles involve the direct halogenation of oxindoles with various reactive halogenating reagents, including N-chloro-N-methoxybenzenesulfonamide [24,25], ammonium halides/oxone [13], Selectfluor® [26,27], and CuBr2 (Scheme 1, reaction 4) [15]. However, these protocols each have a certain scope and limitations. The development of methods that provide efficient access to a wide range of 3-monohalooxindoles from readily available and inexpensive starting materials is still a formidable challenge because the synthesis should be practical for large-scale industrial use and feature reasonably priced products. Thus, further work is needed to develop a novel strategy for an efficient synthesis of such a versatile synthon.

On the other hand, diethyl (2-oxoindolin-3-yl) phosphates 2 were easily prepared by the base-catalyzed phospha-Brook rearrangement of isatins 1 with diethyl phosphite [28,29]. This compound has a remarkable structural feature: the phosphate moiety is located at the benzylic position as well as at the position α to an amide group, which makes it a good leaving group for the design and development of new reactions. Accordingly, diethyl (2-oxoindolin-3-yl) phosphates 2 have been used recently as precursors in Friedel–Crafts reactions of arenes [30,31] and cross-coupling reactions of arylboronic reagents [32]. However, the direct SN1 reaction of such isatin-derived 3-phosphate-substituted oxindoles by halide ions as nucleophiles has not been developed yet and remains an unsolved challenge in chemistry.

In order to achieve this goal, and on the basis of our previous experiences in the functionalization of oxindoles [33,34], we herein designed a nucleophilic substitution method of an isatin-derived 3-phosphate-substituted oxindole with haloid acids, leading to 3-monohalooxindoles (Scheme 1).

Once the optimization studies were concluded, we focused our attention on investigating the substrate scope and generality of this protocol. First, we examined the substrate scope of this transformation between hydrochloric acid (36%) with various substituted (2-oxoindolin-3-yl) phosphates 2. As shown in Scheme 2, this reaction was applicable to a wide range of substrates, which generally offered the corresponding 3-monochlorooxindoles 3a–r with a good yield (51–96%), regardless of the electronic nature and position of the substituents on the aromatic ring of 2. In detail, (2-oxoindolin-3-yl) phosphates with an electron-donating methyl or methoxy substituent gave a better yield (see 3b and 3c) than starting materials with an electron-withdrawing group, such as a NO2, CF3, Cl, Br, or F substituent (see 3d–g, 3j, 3k, and 3o). Surprisingly, a phosphate possessing two electron-withdrawing substituents in the form of a 4,6-difluoro motif allowed to access the corresponding product 3l in a higher yield. Notably, phosphate 2a with no substitution on the aromatic ring and on the nitrogen atom showed a good reactivity, furnishing the corresponding product 3a in the highest yield, possibly owing to not having steric hindrance. It appeared that the position of the residue R1 on the aryl ring exerted a pronounced effect on the reactivity. For instance, 4-bromo-, 4-chloro-, 4,6-difluoro-, 7-fluoro-, and 7-chloro-substituted phosphates afforded the corresponding products 3h, 3i, and 3l–n in a higher yield than the 5-fluoro-, 5-bromo-, 6-fluoro-, and 6-bromo-substituted phosphates (see 3d, 3f, 3j, and 3k). In addition, N-protected (2-oxoindolin-3-yl) phosphates with R2 = Me, Et, and Bn, respectively, were also found to be suitable for the transformation and gave the respective products 3p–r in good yield (73–88%, Scheme 2).

In order to further extend the substrate scope, we tried using hydrobromic acid (40%) as a bromine source in the reaction, and the results are summarized in Scheme 3. Generally, the phosphate substrates 2 substituted with electron-donating substituents were more reactive than those with electron-withdrawing motifs, and thus gave a better result. For example, the (2-oxoindolin-3-yl) phosphate substrates with a methyl or methoxy group at the 5-position of the benzene ring could all react with hydrobromic acid in good yield, giving 4b, 4c, and 4g in 72–76% yield. The position of the residue R1 on the phenyl ring of the (2-oxoindolin-3-yl) phosphate had an obvious effect on the reactivity. For example, (2-oxoindolin-3-yl) phosphates bearing a bromo or fluoro substituent in the 6-position all gave the corresponding products in a higher yield than the analogous precursors substituted in the 5-position (see 4i and 4j vs 4d and 4f). Moreover, there was seemingly no significant difference in the reactivity of the starting materials carrying a chloro substituent in the 4- and the 7-position, respectively, since the products 4h and 4l were obtained in a comparable yield of 66 and 58%, respectively. The substrate with no residue R1 on the phenyl ring produced the corresponding product 4a in a higher yield than some the substituted substrates. In addition, N-protected (2-oxoindolin-3-yl) phosphate substrates could also deliver the products in good yield (see 4m–o), even though bulkier N-protecting groups, i.e., benzyl and ethyl, slightly decreased the yields of the products (see 4n and 4o).

Regrettably, when a substrate 2 bearing a strong electron-withdrawing nitro or trifluoromethyl group on the phenyl ring was employed, the reaction gave very complex side products under the standard conditions, and almost no product was observed. In addition, we also tested hydroiodic and hydrofluoric acid as a halogenating reagent in the reaction, which did not provide any desired product. Interestingly, the (2-oxoindolin-3-yl) phosphate substrates could be directly reduced into oxindoles using hydroiodic acid (57%, Scheme 4).

To show the utility of this novel method, we performed the syntheses of 3a from Scheme 2 on a 1 mol-scale. This larger-scale reaction smoothly took place to give the product 3a in 95% yield under the standard conditions, which was similar to the result of the smaller-scale reaction, and column chromatography separation is not usually required. This outcome indicated that the transformation could be applicable for larger-scale syntheses of 3-monohalooxindoles products. In addition, the structure of all products 3 and 4 was unambiguously assigned by 1H and 13C NMR spectroscopy and HRMS. Especially the proton at the C-3-position of 3-monohalooxindoles gave diagnostic singlets (5.25–5.93 Hz) instead of double peaks due to the absence of coupling with the phosphorus atom in the 1H NMR experiment. This indicated that the methylene moiety adjacent to the phosphate group had been displaced by a halogen atom, which further implied that the halogenation reaction with haloid acids had occurred.

On the basis of this study and the early related reports [30,35], an SN1 mechanism for this transformation is proposed as illustrated in Scheme 5. Initially, the C–O bond of the C-3 position of a diethyl (2-oxoindolin-3-yl) phosphate 2 is activated by protonation with a haloid acid. Subsequently the phosphate leaving group is eliminated to generate the carbocation intermediate III, which is then followed by rapid combination with a nucleophilic halide ion to form a 3-monohalooxindoles 3 or 4.

In summary, a new method for the synthesis of 3-monohalooxindoles via acidolysis of isatin-derived 3-phosphate-substituted oxindoles with haloid acids was developed. The present methodology involves the formation of an oxindole having a phosphate moiety at the C-3 position via the [1,2]-phospha-Brook rearrangement under Brønsted base catalysis and the subsequent acidolysis with haloid acids. The mild reaction conditions, simple operation, good yield, and readily available and inexpensive starting materials make this protocol a valuable method for the preparation of various 3-halooxindoles on a large-scale industrial application.

© 2021 Liu et al.; licensee Beilstein-Institut.
This is an Open Access article under the terms of the Creative Commons Attribution License (https://creativecommons.org/licenses/by/4.0). Please note that the reuse, redistribution and reproduction in particular requires that the author(s) and source are credited and that individual graphics may be subject to special legal provisions.
The license is subject to the Beilstein Journal of Organic Chemistry terms and conditions: (https://www.beilstein-journals.org/bjoc/terms) 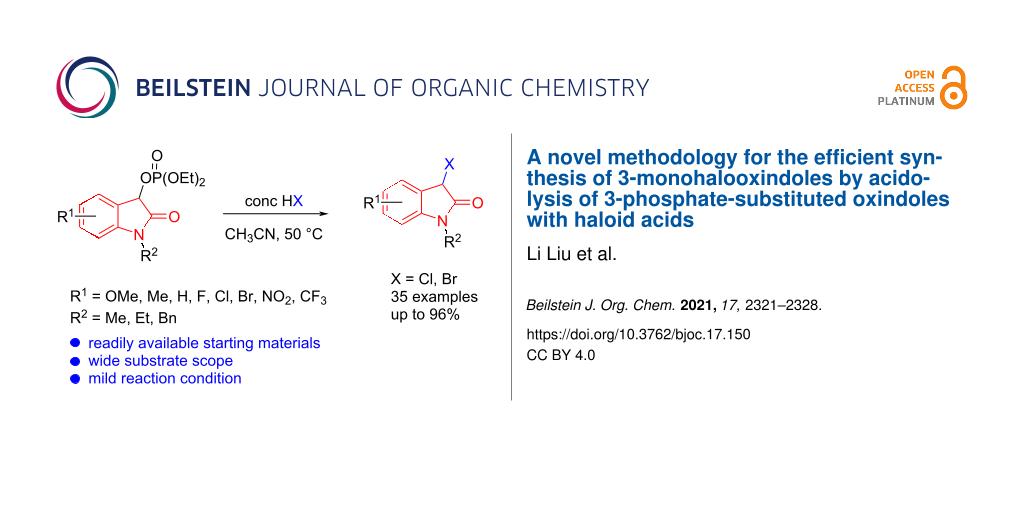