All articles from this author
Nitirat Chimnoi


All articles from this author
Supa Hannongbua

Ten dipyridodiazepinone derivatives were synthesized and evaluated for their anti HIV-1 reverse transcriptase activity against wild-type and mutant type enzymes, K103N and Y181C. Two of them were found to be promising inhibitors for HIV-1 RT.

Dipyridodiazepinone nevirapine (1) [1] (Figure 1) is a potent non-nucleoside inhibitor of human immunodeficiency virus type 1 reverse transcriptase (HIV-1 RT) and is approved as a therapeutic agent for the treatment of AIDS. In the clinic, nevirapine monotherapy results in relatively rapid drug resistance due to mutation of the RT enzyme. To develop a second-generation inhibitor with improved activity against the mutant RT enzyme, many efforts have been focused on the synthesis of dipyridodiazepinone derivatives [2-8]. On the basis of molecular modeling analysis on the wild-type (WT) and Y181C HIV-1 RT, it was found that the dipyridodiazepinone derivatives containing an unsubstituted lactam nitrogen and a 2-chloro-8-arylthiomethyl moiety, when compared with 9 [4] (Figure 2) as reference, are effective inhibitors of this mutant enzyme. Some dipyridodiazepinone derivatives containing an N-methylated of lactam also exhibited good potency against the WT enzyme. The 8-amino derivative of nevirapine and its hydrochloride salt also provided interesting potency. The first two compounds, 2 and 3, were synthesized and their virustatic and virucidal activities against HIV-1 subtype E were reported previously [9]. As part of our continuing efforts directed towards the development of potential HIV-1 RT inhibitors, we have extended the synthesis of dipyridodiazepinone derivatives (Figure 2) and evaluation of their activity against wild-type RT and K103N and Y181C mutant RT enzymes.

Afterwards, the aminopyridinecarboxamide intermediates 15 were treated as previously reported [4] to give 8-arylthiomethyldipyridodiazepinones, as shown in Scheme 2.

Aminopyridinecarboxamides 15 were regioselectively brominated to produce bromo compounds 18. The diazepinone ring was formed by treatment with sodium hexamethyldisilazane in pyridine to yield tricyclic compounds 19. Coupling of 19 with vinyltributyltin in the presence of tetrakis(triphenylphosphine) palladium(0) provided 8-vinyl compounds 20 which underwent ozonolysis to produce aldehydes 21 in good yields. The reduction of 21 with NaBH4 produced alcohols 22, which were converted to the corresponding chlorides 23 through treatment with thionyl chloride in dichloromethane. The reaction of 23a with thiophenolate, 3-methoxythiophenolate, and 3-fluorothiophenolate in N,N-dimethylformamide yielded 2, 3, and 4, respectively, whilst the reaction of 23b with thiophenolate and 3-methoxythiophenolate yielded 5 and 6, respectively. Methylation of the lactam nitrogen of 5 and 6 with methyl iodide provided 7 and 8. Compound 9 was also prepared via methylation of 2, which was used as the reference compound.

Synthesis of compounds 10 and 11

Compounds 10 and 11 were synthesized as shown in Scheme 3. The starting 3-amino-2-cyclopropylamino-4-methylpyridine (27) was prepared from commercially available 2-hydroxy-4-methyl-3-nitropyridine (24) through a sequence involving treatment with POCl3, followed by chloro displacement from the resulting 2-chloro compound with the aminocyclopropyl group, and finally reducing the nitro to the amino group. 2-Chloro-5-nitronicotinic acid (30) was prepared by nitration of commercially available 2-hydroxynicotinic acid (28) followed by treatment with POCl3. Then amine 27 and the acid 30 underwent coupling to produce carboxamide 31. Diazepinone ring closure was performed by heating 31 in hexamethyldisilazane. Afterwards, the nitro group was reduced to produce the hydrochloride salt 10. Treatment of 10 with 50% aqueous NaOH yielded its corresponding free amino compound 11.

The results from the biological testing of all compounds synthesized, compared with nevirapine (1) and 9, against the wild-type RT together with K103N and Y181C mutant RT are shown in Table 1. It was found that compounds 2–8 exhibited higher inhibitory activity against WT-RT and both mutant RTs compared to nevirapine. Interestingly, 5 and 6 were found to be about four times more potent against WT-RT than 9, and they provided comparable activity against K103N mutant RT. Incorporation of a methyl group at the R1 position and the free N of the amide seems to be responsible for this higher activity. However, 9 showed better potency against the Y181C mutant RT compared to the other two compounds. Compound 5, without methoxy substituent, was found to be slightly more potent than 6 except for Y181C mutant RT. Additional N-methyl groups in 7 and 8 led to diminished activity relative to that of 5 and 6. 10 and 11, 8-amino analogues of nevirapine, were found to be ineffective inhibitors.

aIC50 is the concentration of inhibitor required for 50% inhibition of reverse transcriptase. bStandard errors obtained from duplicate experiments.

To understand the binding mode of the new potent derivatives 5, 6 and 9 were docked into the HIV-1 RT binding site by using the default parameters of the GOLD v3.2 program. The wild type HIV-1 RT structure (pdb code 1klm) was taken from the protein data bank. Additionally, two HIV-1 RT mutants, K103N and Y181C, were used and analyzed by mutating positions 103 and 181 of the wild-type structure through the use of the Sybyl 7.2 program. The docked conformations of 5, 6, 9 and nevirapine are shown in Figure 3, and their GoldScores are presented in Table 2. In the wild-type and K103N binding sites, the docked orientations of 5, 6 and 9 are similar to that of nevirapine. In the Y181C binding site, except for 5, the orientations of the others were similar to nevirapine orientation. The GoldScores of 5, 6 and 9 were higher than those of nevirapine by 17.61–24.56, 9.52–15.00 and 15.33–21.06 in the WT, K103N, and Y181C binding pockets, respectively. In the wild-type binding pocket, the H-bond interaction with the backbone oxygen atom of Lys103 was found to contain 5, 6 and 9 but no nevirapine was present. Compounds 5, 6 and 9 also formed an H-bond interaction with the backbone nitrogen atom of Val106. Since there is a methyl group at the R1 position of 5 and 6, their docked conformations were slightly shifted below the binding pocket as compared to the docked conformation of 9. This shift caused the formation of a stronger H-bond interaction of 5 and 6 with Lys101, Val179, Tyr188 and Val189 compared to 9. The methyl group at R1 position of 5 and 6 also formed stronger H–π interaction with Trp229. Moreover, the methoxy substituent of 6 revealed a strong attractive interaction with Lys104, but the movement of ring C in 6 caused a steric interaction with the side chain of Lys102.

aIn parenthesis is the standard error of the GoldScore from the triplicate of docking calculations.

The remarkable anti HIV-1 activity of dipyridodiazepinone derivatives, particularly compounds 5 and 6, was presented in this study. A preliminary SAR study showed that the methyl group at the R1 position and the free N of amide are crucial for potent activity. This is possibly because of the strong interaction with the amino acid residue in the RT enzyme. The secondary test of these two compounds was regarded to be valuable for future investigation.

We would like to thank the Thailand Research Fund (DBG4780009 for S.T., RTA5080005 for S.H., DBG5180022 for P.P., and MRG5080267 for P.S.), National Synchrotron Research Center for K.C., and the Ministry of Education for their financial support. We also gratefully acknowledge the help of Dr. Carrie Dykes of the University of Rochester, New York for the mutant clones, K103N and Y181C; and Dr. Hiroaki Mitsuya of the HIV and AIDS Malignancy Branch, USA for the WT clone.

© 2009 Khunnawutmanotham et al; licensee Beilstein-Institut.
This is an Open Access article under the terms of the Creative Commons Attribution License (http://creativecommons.org/licenses/by/2.0), which permits unrestricted use, distribution, and reproduction in any medium, provided the original work is properly cited.
The license is subject to the Beilstein Journal of Organic Chemistry terms and conditions: (http://www.beilstein-journals.org/bjoc) 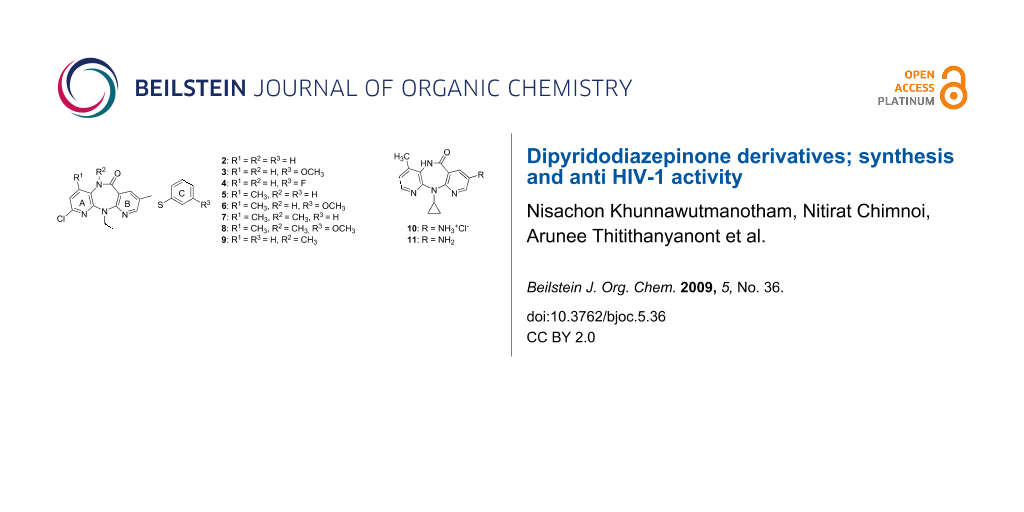